The U.S. biodiesel production industry has had a “feast or famine” pattern of profitability in recent years. The industry made very large profits in 2011 and 2013, but had losses in most years previous to 2011 and again in 2014 (farmdoc daily, January 28, 2015). The feast or famine pattern has been closely tied to expiration of the biodiesel tax credit in the face of binding RFS biodiesel mandates. The purpose of this article is to provide a full-year review of biodiesel production profitability in 2015.

To track plant profitability over time, weekly biodiesel and soybean oil prices at Iowa plants from the Agricultural Marketing Service (AMS) were collected starting in 2007. Natural gas costs through 2013 are estimated based on monthly data from the Energy Information Agency (EIA). Due to a change in the EIA price series, natural gas costs are estimated as one percent of the nearby NYMEX natural gas futures price starting in January 2014. Glycerin and methanol prices were obtained from OPIS. Figure 1 presents the weekly (pre-tax) estimates of biodiesel profits over January 26, 2007 through January 29, 2016 based on the prices and model assumptions. It is obvious from the chart that the losses that started in the Fall of 2014 continued throughout nearly all of 2015. The average weekly loss in 2015 was $-0.10 per gallon. The largest losses, over $-0.40 per gallon, occurred in January and September. 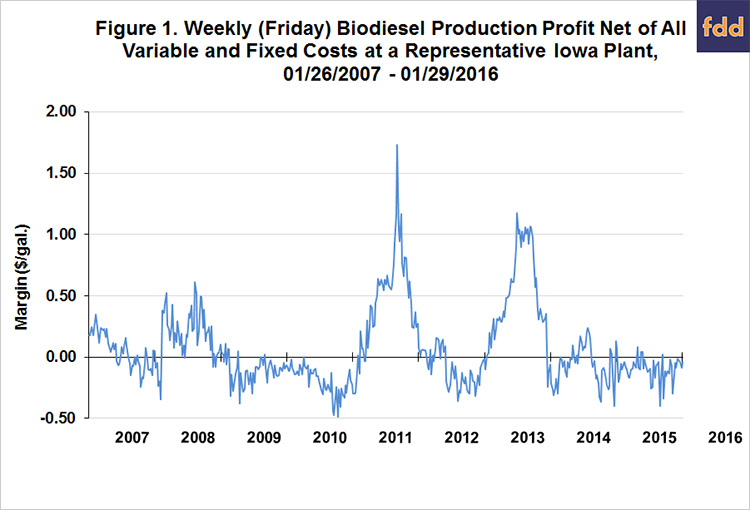 The estimates in Figure 1 indicates we can tally 2015 in the “famine” category for biodiesel producers. This outcome is consistent with the pattern in previous years related to biofuels policy. The 2011 and 2013 spikes in profitability can be directly traced to the race by diesel blenders to take advantage of the blender tax credit that was set to expire at the end of each year (e.g., farmdoc daily March 19, 2014). The key insight is that blenders faced a binding RFS biodiesel mandate and it was rational to effectively purchase the biodiesel at a discount in the current year due to the tax credit in order to meet mandates in later years. Once the tax credit expires, the incentive to push up prices, profits, and production disappears and the biodiesel industry returns to the norm of losses. This raises the question as to why losses are the norm for biodiesel production in the absence of these policy incentives.

The main driver of the losses is found in Figure 2, which shows monthly capacity utilization for the U.S. biodiesel production industry from January 2010 through November 2015 (latest data available from the EIA). The chart shows that capacity utilization has been less than 20 percent at times and no more than about 70 percent, indicating ample slack capacity to draw upon as needed. Returns do not have to cover the variable and fixed costs of production for this slack capacity to be brought online; but, instead only have to cover variable costs because the capacity is already in place. In essence, the U.S. biodiesel production industry is over-built relative to existing market and policy incentives. This excess capacity presents a constant threat of over-production once biodiesel prices exceed variable costs of production. Note that this discussion of slack capacity focuses only on U.S. domestic production. There appears to be ample slack capacity for non-U.S. producers that can be (and has been) drawn upon if needed in the form of biodiesel exports to the U.S. 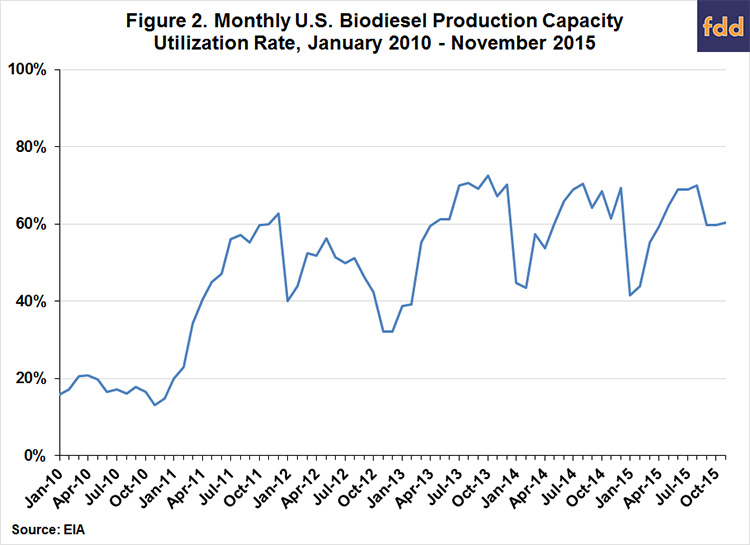 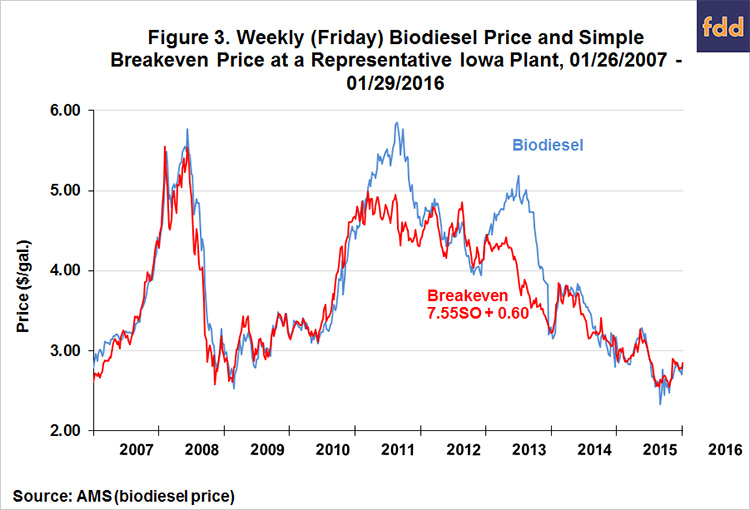 It is helpful to aggregate the profit margins over an annual horizon in order to see broader trends in estimated biodiesel production profits. Figure 4 shows total annual (pre-tax) profits net of variable and fixed costs for each calendar year between 2007 and 2015. Profits are presented in terms of both total pre-tax net returns and percent return to equity. The total loss in 2015 was $-3.2 million, or -13.4 percent. Only one other year, 2010, had losses of a comparable magnitude over the sample period. We can use the average net profit for the representative plant to make a rough estimate of the loss for the entire U.S. biodiesel industry in 2015. Assuming all plants in the industry earned a net loss of -$0.10 per gallon, then, total biodiesel production (excluding renewable diesel) for the U.S. in 2015 of 1.3 billion gallons implies aggregate industry (pre-tax) losses of -$130 million. 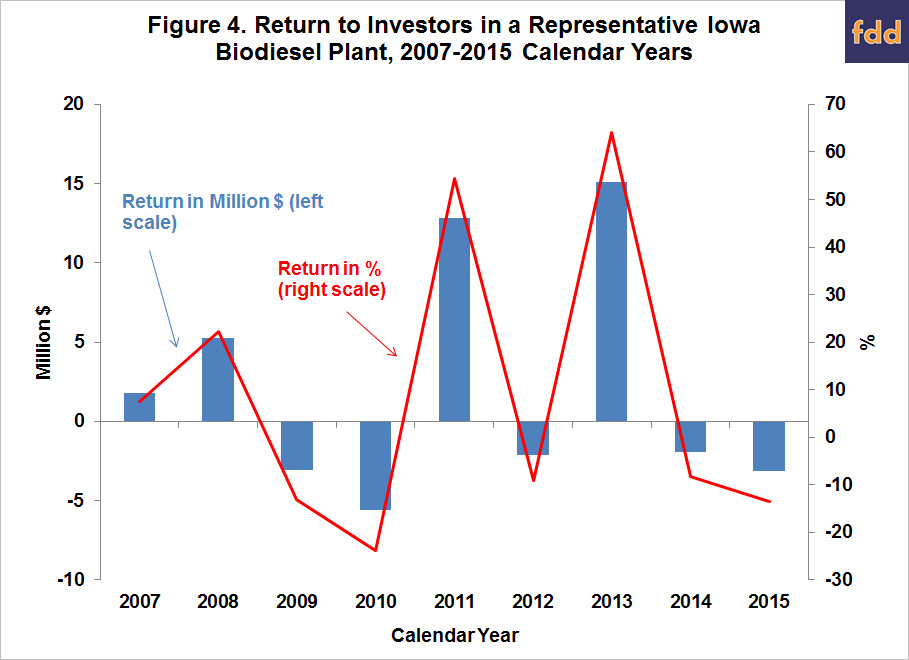 Finally, the percent return to equity holders provides useful information on the attractiveness of investment in biodiesel plants relative to other investments. The average return was 9.0 percent over 2007-2015 and the standard deviation, a measure of risk, was 31.6 percent. By comparison, the average return for the stock market over this period, as measured by the S&P 500, was 8.3 percent and the associated standard deviation was 19.7 percent. The ratio of average return to standard deviation provides one measuring stick of an investment’s return-risk attractiveness, and on this measure the ratio for biodiesel investment, 0.28, is substantially less than the stock market as a whole, 0.42. The relative riskiness of biodiesel investment is not surprising given that 80 percent of the positive profits earned by biodiesel plants occurred in only two years (2011 and 2013).

2015 was not kind to U.S. biodiesel producers. Estimated losses averaged -$.10 per gallon, and the industry as a whole was estimated to have a loss of -$130 million. Unfortunately, losses appear to be the norm for the biodiesel industry outside of years when policy incentives combine to create a boom in biodiesel prices and profits. The main reason that losses have been the norm is that the U.S. biodiesel industry is over-built and there is ample slack capacity that can be drawn upon as needed. At most 70 percent of production capacity has been utilized in recent years. There is some light at the end of tunnel moving forward. The EPA’s recent RFS rulemaking pushes the biodiesel mandate to 2.0 billion gallons in 2017. The effective biodiesel mandate could be much higher if biodiesel is the least expensive compliance alternative to fulfill the remainder of the advanced biofuels mandate and the part of the conventional ethanol mandate above the E10 blend wall. In addition, there is the possibility that the biodiesel tax credit could be converted from a blender to a producer credit, which would effectively limit biodiesel (and renewable diesel) imports to the U.S (farmdoc daily, August 5, 2015). Either or both of these policy changes could potentially eliminate the current slack production capacity of the U.S. biodiesel industry, which could provide a major lift to the profitability of biodiesel production.