There has been much debate and much written about the likely costs and benefits of including ethanol in the domestic gasoline supply. Costs and benefits fall into two major categories–environmental and economic (e.g., Stock, 2015). One economic consideration is the potential impact on domestic gasoline prices from augmenting the gasoline supply with biofuels. A second economic consideration, and one that has received the most attention, is the cost of ethanol relative to petroleum-based fuel. What has been missing from the analysis of the value of ethanol in the gasoline blend is an estimate of the net value of ethanol based on: i) an energy penalty relative to gasoline; and ii) an octane premium based on the lower price of ethanol relative to petroleum sources of octane. This article provides an analysis of that net value since January 2007.

The analysis of the relative costs ethanol in the U.S. domestic gasoline blend appears to be very straightforward at first blush. Simply adjust the price of ethanol for the lower energy content of ethanol and then compare to the price of “pure” gasoline. However, the analysis is complicated by the change in gasoline refining that occurred as ethanol mandates were increased. That is, a change in refining practices has occurred to produce a lower octane gasoline to blend with the higher octane ethanol. The cost of those changes is not well known. In addition, a full analysis of the relative costs of gasoline blends with and without ethanol would require a comprehensive analysis of refinery blending costs.

Gasoline sold at the pump is actually a blend of ethanol and a number of petroleum products, such as methane, butane, and naptha (see Leffler, 2008, Ch. 14). Refinery blending economics for gasoline are complicated due to the differing array of characteristics of alternative blending components and regulatory requirements to produce “spec” gasoline. For example, ethanol has chemical characteristics that may be beneficial, e.g., as an octane enhancer, or detrimental, e.g., high vapor pressure. The blend of these components changes seasonally (due to weather and changes in emissions requirements) and as the relative prices of the various products change. Much like the price of feed ingredients in a least-cost feed ration, changes in the price of ethanol and the other petroleum products can influence the value of ethanol in the blend. Energy companies have developed sophisticated mathematical refinery models to determine optimal blends of the various gasoline components given prices and technical specifications.

Absent a comprehensive least cost refinery model, much of the public analysis of the value of ethanol has been narrowly focused on the price of ethanol relative to the price of conventional blendstock for oxygenate blending (CBOB) adjusted by the lower energy value of ethanol. For the most part, the analysis has concluded that the generally lower price of ethanol relative to CBOB has not been enough to offset the lower energy value of ethanol, so that ethanol blends have resulted in a higher cost per mile driven. (e.g., Bryce, 2015) This assumption is also built into most economic models used to analyze ethanol policies (e.g., de Gorter and Just, 2010). 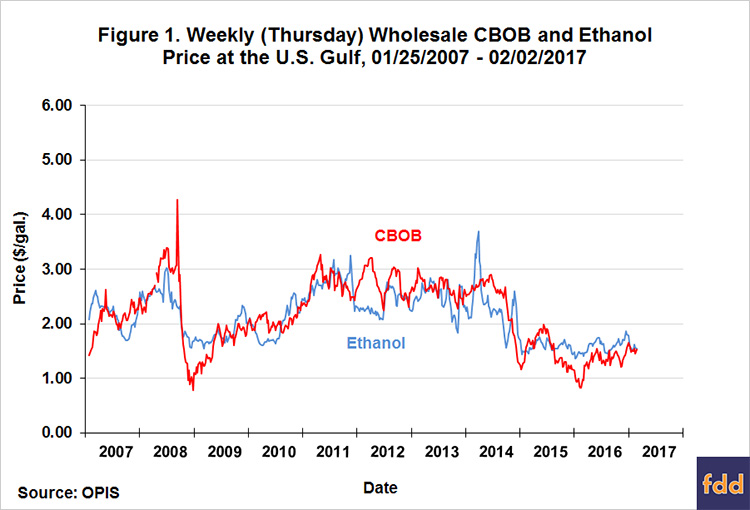 We next adjust the price of ethanol based on the assumption that ethanol has approximately two-thirds the energy value of CBOB (ethanol: 80,340 BTU per gallon, CBOB 125,000 BTU per gallon). As shown in Figure 2, the energy-adjusted price of ethanol was above the price of CBOB except for very brief periods in 2008 and 2014. On average, the energy-adjusted price of ethanol was $1.02 per gallon above the price of CBOB over the entire period. Adjusting ethanol prices for lower energy content not only flips the direction of the relationship between ethanol and CBOB prices, but it also makes ethanol much more expensive than CBOB. This type of calculation has led many to conclude that the inclusion of ethanol in the fuel supply results in a higher retail cost of the gasoline blend per mile driven. 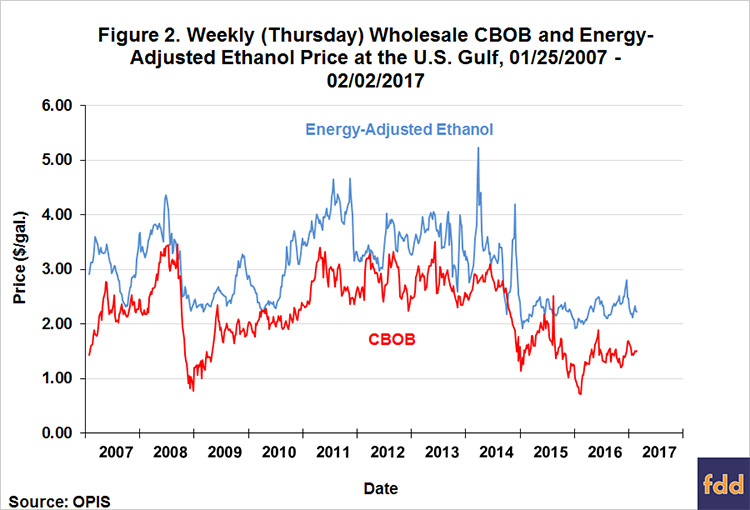 We argue that the energy penalty associated with ethanol is only part of the consideration in estimating the value of ethanol in the domestic gasoline blend. Specifically, the high octane rating of ethanol relative to CBOB enhances its value in the blend. The magnitude of that value generally depends on the price of ethanol relative to other octane enhancers. The alternative octane enhancers we consider are known as the “aromatic” compounds: benzene, toluene, and xylene. These compounds have octane ratings that are generally similar to ethanol and have a long history as octane enhancers in gasoline blends. Aromatics are typically produced via high-pressure catalytic reformers in the same refineries that produce other petroleum feedstock for gasoline blending. As shown in Figure 3, the average price of these aromatics tends to follow the price of CBOB, but at a premium. 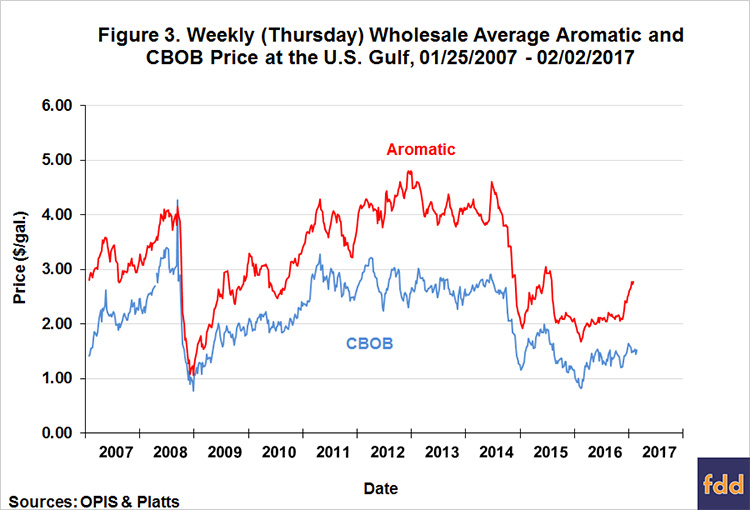 In the following analysis, we assume that ethanol and the aromatics substitute approximately one-for-one in gasoline blends in terms of octane. Some evidence supporting this assumption is found in Figures 4 and 5, which are drawn from a 2015 report for the Texas Commission on Environmental Quality (TCEQ). The purpose of the report is to, “…to develop physical properties and specification profiles, and to report laboratory test results for samples of gasoline and diesel fuel collected from retail stations across Texas. Testing of various properties was completed in an approved laboratory which involved speciation of volatile organic compounds (VOC) including oxygenates, determination of Reid vapor pressure (RVP), and estimation of sulfur in gasoline, and quantification of aromatics, cetane and sulfur in diesel fuel.” (p. 1-1). Figure 4 shows the ethanol content of gasoline blends for various regions in Texas, and not surprisingly, ethanol rose from zero percent in 2005 to 10 percent by 2011 or 2014. Figure 5 shows the aromatics content for the same regions, and while there is quite a bit of variation across regions, the overall trend is clear, with the average decline across the sample about 10 percent. These data suggest that, at least in Texas, as ethanol content climbed towards 10 percent aromatic content declined by a commensurate amount. This comparison, of course, only strictly applies to Texas, but it does provide data for a major consumption area of the U.S. that supports the assumption of one-to-one substitution of ethanol for aromatics in terms of octane content. 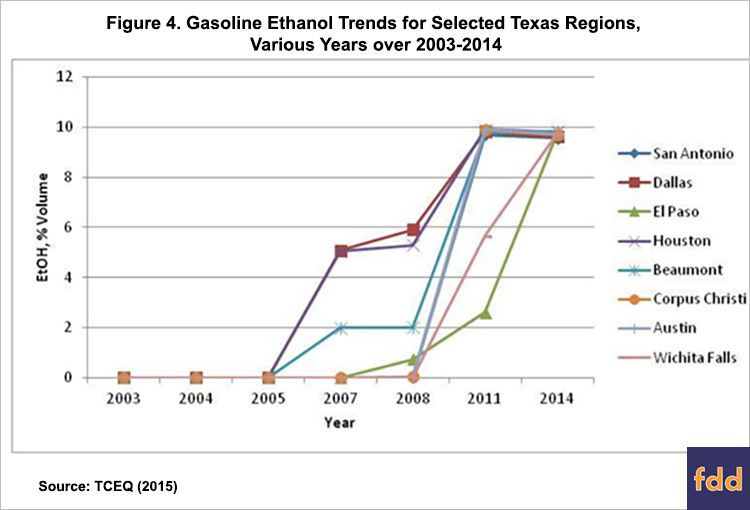 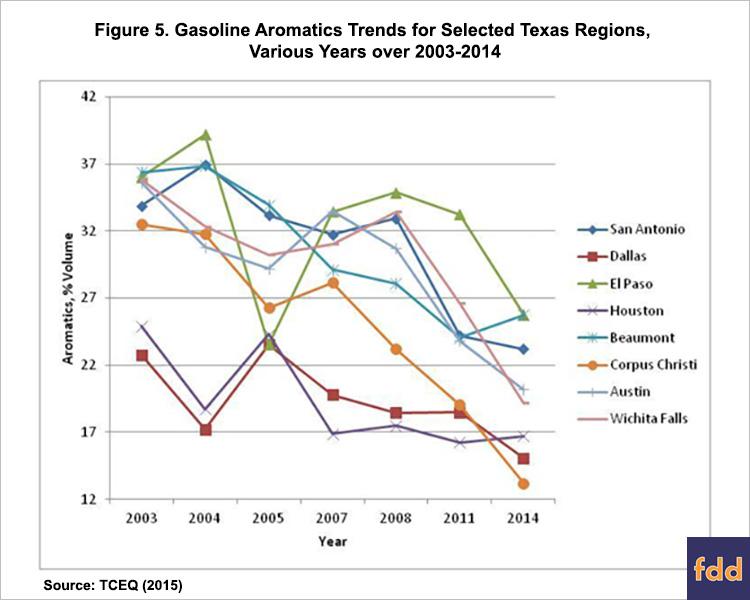 In order to simplify our analysis we computed an average of the three aromatics prices each week (see the farmdoc daily article of February 3, 2016 for analysis of the individual aromatic price series). As presented in Figure 6, the average price of the three aromatic octane enhancers has been above the price of ethanol since January 2007, except for a brief period in late 2008/early 2009. The price difference was especially large in 2012, 2013, and the first half of 2014. After the crash in crude oil prices in the second half of 2014, the price difference narrowed substantially. Over the entire period, the price premium of the aromatics relative to ethanol averaged $1.06 per gallon. This difference represents the value of ethanol as an octane enhancer in the domestic gasoline blend, assuming that the price of the aromatics would not have been different if ethanol had not been available as an octane enhancer. 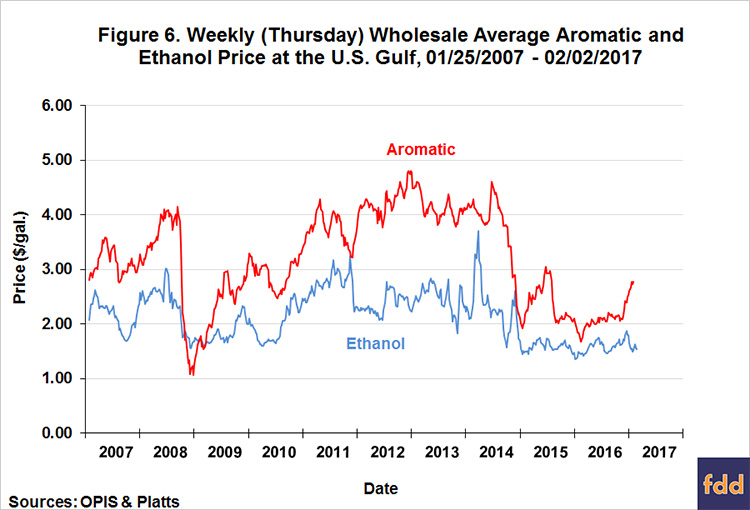 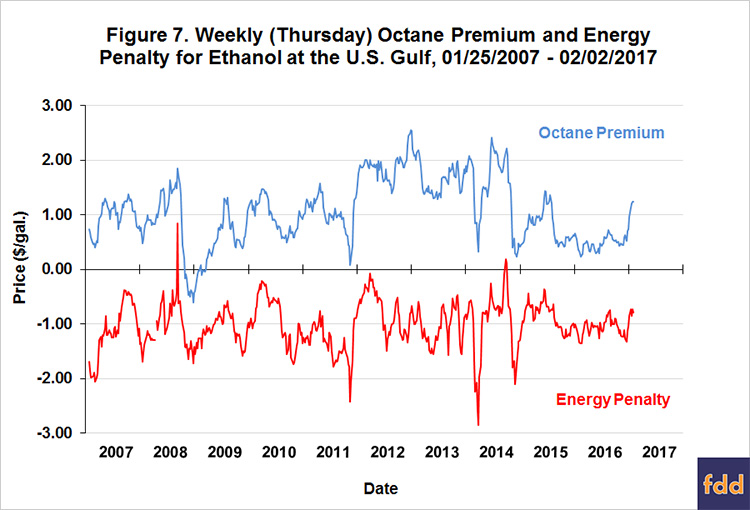 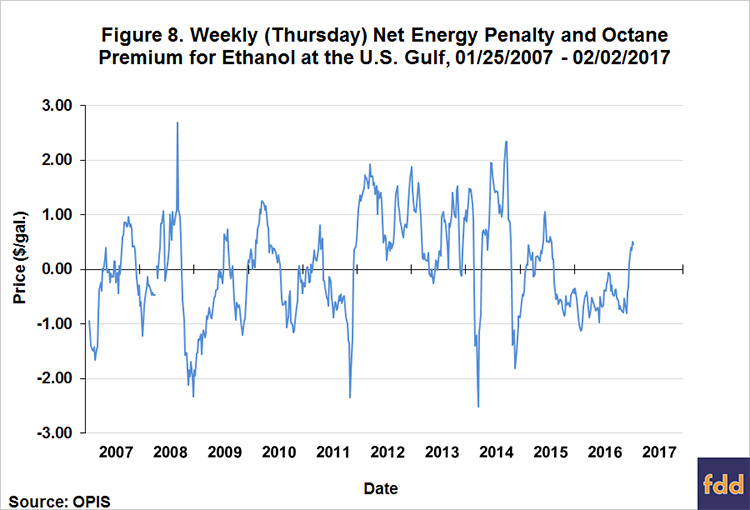 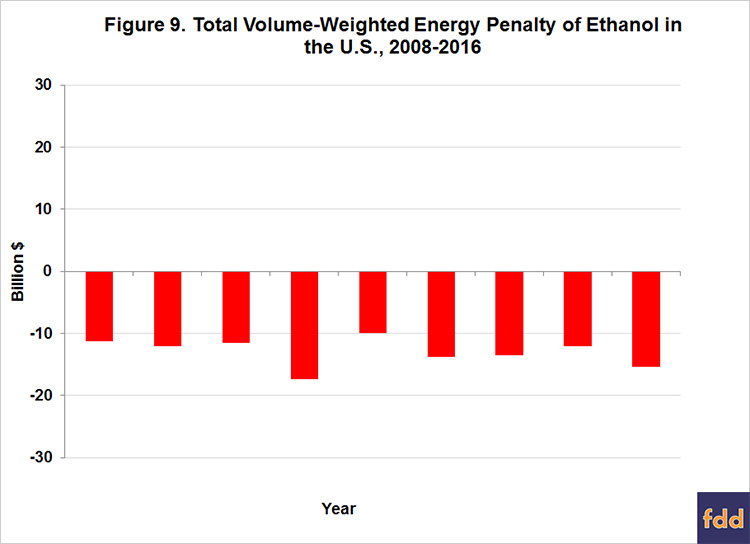 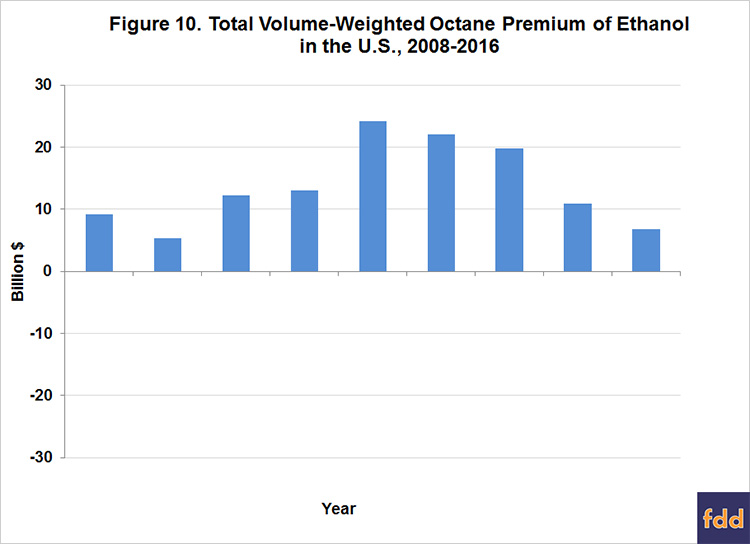 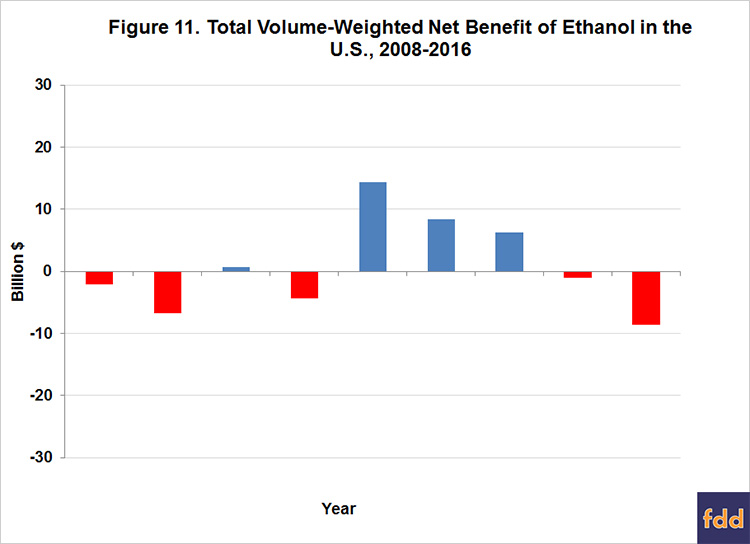 On an annual basis, the calculated energy penalty for ethanol ranged from about $10 billion to about $18 billion and averaged -$13.0 billion (Figure 9). The octane premium ranged from about $5 billion to about $24 billion dollars and averaged $13.8 billion (Figure 10). The calculated net value of ethanol in the domestic gasoline blend ranged from -$8.56 billion in 2016 to $14.3 billion in 2012 (Figure 11). The volume weighted average net value over the nine-year period was nearly $0.8 billion. The positive net value of ethanol was concentrated in 2012, 2013, and 2014, a period characterized by generally high prices for ethanol, CBOB and particularly for the aromatics. The results for 2012 are especially interesting. Due to the severe drought in the U.S. Corn Belt that year, corn prices soared to record highs above $8 per bushel. Ethanol prices surged as well and this brought about considerable clamor from refiners (and others) to reduce the RFS ethanol mandate and a formal waiver request was submitted to the EPA that was subsequently (farmdoc daily, August 2, 2012). Our analysis shows that the net benefit of ethanol in 2012 was actually the highest over 2007-2016. The reason is that gasoline prices were high enough relative to ethanol to reduce the energy penalty, while at the same time lofty aromatic prices drove the octane premium to high levels. The large negative net value in 2016 is essentially driven by the reverse of the 2012 price patterns.

It is important to keep in mind the limitations of our analysis. We only considered the energy and octane characteristics of ethanol relative to petroleum blendstocks. Other characteristics, such as Reid vapor pressure (RVP) almost certainly affect the value of ethanol in gasoline blends. We also did not take into account the lower energy value of aromatics relative to other petroleum blendstocks. This could potential decrease the energy penalty of ethanol when it replaces aromatics in the blend. The bottom-line is that a refinery optimization model is needed to conduct a complete analysis of value of ethanol in the gasoline blend. Nonetheless, our analysis points out the partial and misleading nature of work that only focuses on the energy penalty of ethanol and ignores the octane premium.

de Gorter, H., and D.R. Just. "The Social Costs and Benefits of Biofuels: The Intersection of Environmental, Energy and Agricultural Policy." Applied Economic Perspectives and Policy 32:(2010):4-32.