The march towards writing the 2018 Farm Bill continues. Recently, the Senate Ag Committee held a hearing on the farm economy which focused significant attention on the relatively low commodity prices since the 2014 Farm Bill (see, Farm Policy News, May 26, 2017). Congress has long authorized nonrecourse loans to provide support to commodity prices and farmers. This article provides historical background on that policy.

The Marketing Assistance Loan (MAL) program reauthorized in the 2014 Farm Bill is the direct descendent of the primary policy to support commodity farmers that emerged out of the New Deal and World War II. During efforts to combat the Great Depression, Congress developed a price supporting, nonrecourse loan program for farmers of a select group of commodities (i.e., corn, cotton, rice, tobacco and wheat). The loans were price supports because the farmer borrowed against the harvested commodity at the loan rate, which at the time was based on a formula designed by Congress and implemented by USDA. The formula was known as parity; the 1938 Act was the first to explicitly use the term and define it. Parity was the commodity price that provided it the purchasing power for goods purchased by farmers equal to what the price/goods ratio was in the base period (1909-1914); the ratio between crop prices and goods purchased compared with that of the base period years (Agricultural Adjustment Act of 1938, P.L 75-430, (75th Cong., Feb. 16, 1938)). The actual loan rate was set as a percentage of parity.

If prices at the time of repayment of the loan were below this loan rate, the farmer could forfeit the commodity and keep the loan funds. It was a nonrecourse loan meaning that the Federal government did not have recourse against the farmer for forfeiting the crop; forfeiture did not result in a penalty nor was the forfeiting farmer precluded from taking out a loan in the future. In this way, the loan program served as a price support: if prices were below the loan rate, the Federal government through the Commodity Credit Corporation (CCC) became the effective buyer of last resort of the commodity at the loan rate.

The problems with this policy were numerous, beginning with the production incentive provided by the loan rate when it was above market prices. After the Korean War, the Federal government began to be overwhelmed with forfeited surplus commodities (see e.g., farmdoc daily, February 16, 2017). The parity system’s breakdown led to significant political and operational problems; Congress worked through an almost twenty-year effort to revise and reform the policy. High crop prices in the early Seventies pushed Congress to prioritize income support through target prices and deficiency payments over the price supporting loan policy; price supporting loans were not eliminated, however. Target prices were part of a market-oriented reform of farm support, permitting the farmer to sell crops at market prices and collect a deficiency payment to supplement income if prices were low. The loan program continued but USDA was directed, in effect, to figure out a proper loan rate that would neither harm exports nor result in surplus stocks in Federal storage (see, Agriculture and Consumer Protection Act of 1973, P.L. 93-86 (93d Congress, August 10, 1973). 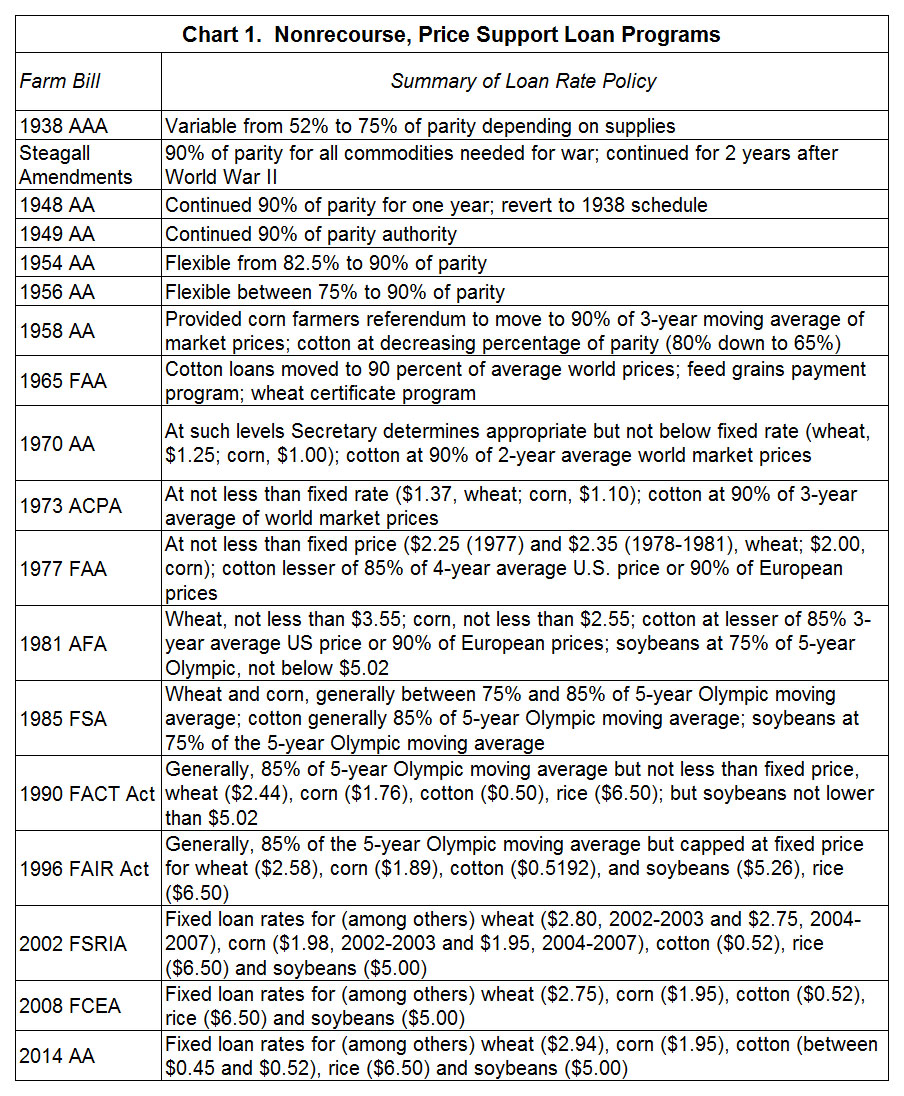 Significant revisions of the price support loan program came in 1985 and 1990. When he was in the House of Representatives, current Senate Ag Committee Chairman Pat Roberts (R-KS) was one of the leaders in an effort to reform the program with the marketing loan concept. The reform sought to continue supporting prices while avoiding the forfeiture problem that had reappeared in the Eighties farm crisis. The marketing loan permitted farmers to repay the loan at a lower rate when prices were below the original loan rate and keep the difference known as the loan gain. In this way, if prices fell below the loan rate the farmer would pay at the lower price instead of forfeiting the grain at the loan rate. The concept also included authority for Loan Deficiency Payments (LDP) pursuant to which the farmer would agree to forego the loan completely in return for a payment on the difference between prices and the loan rate. This authority was provided to cotton and rice by Congress in the 1985 Farm Bill (see, Food Security Act of 1985, P.L. 99-198 (99th Cong., Dec. 23, 1985)).

The 1985 Farm Bill also moved calculation of loan rates for corn and wheat to between 75 and 85 percent of the five-year Olympic moving average of crop prices. Congress expanded the marketing loan authority to wheat and feed grains in the 1990 Farm Bill (see, Food, Agriculture, Conservation and Trade Act of 1990, P.L. 101-624 (101st Congress, Nov. 28, 1990)). The 1990 Farm Bill continued use of the five-year Olympic moving average of market prices, generally calculating the loan rate as 85 percent of it for wheat, corn, cotton and rice.

The 1996 Farm Bill continued the marketing assistance loans and the Olympic moving average calculations, but also placed a fixed price cap (as opposed to floor) on the loan rate. For example, the wheat loan rate was 85 percent of the five-year Olympic moving average but not to exceed $2.58 per bushel; corn not to exceed $1.89 per bushel and cotton not to exceed $0.5192 per pound (see, Federal Agriculture Improvement and Reform Act of 1996, P.L. 104-127 (104th Congress, Apr. 4, 1996)). The 1996 Farm Bill also decoupled farm program payments from planted acres, using a historic average of plantings to calculate base acres upon which payments were made.

The 2002, 2008 and 2014 Farm Bills all continued the MAL program, including LDP’s for the major commodities, defined as loan commodities. Congress set loan rates at a fixed price values in the statute for each commodity and has thus far continued that practice through the 2014 Farm Bill. The acreage-based decoupling for farm program payments was also continued by the 2002, 2008 and 2014 Farm Bills. The MAL program, however, has not been decoupled from production because the loans are made on the actual crop harvested by the farmer.

If Congress reauthorizes the nonrecourse, price-support loan program in 2018 it will mark eighty years of this policy for U.S. commodity farmers. As chart 1 indicates, the policy has undergone significant specific revisions but has continued to serve as the backstop assistance against catastrophically-low crop prices. It has also been supplemented with, first, the target price programs, then direct payments and, most recently, revenue-based payments. The loan program, by comparison to payment programs, serves not only as the price backstop but can also provide an infusion of cash at harvest. Also unlike the payment programs, farmers generally have to repay all or part of the loan within 9 or 10 months. Notably, loan rates and repayments typically result in low costs for the program in terms of Federal outlays as measured by the Congressional Budget Office (see e.g., CBO’s January 2017 Baseline for Farm Programs). CBO estimates just over $700 million in outlays for all marketing loan benefits over 10 years, with cotton receiving the largest expenditure of $329 million in 2016.

For additional perspective on the loan program, Charts 2 and 3 provide illustrations of the loan program since the 1985 Farm Bill using data from USDA (USDA-NASS, Agricultural Statistics Annual). Chart 2 illustrates the percentage of total production that was put under loan for each of the major loan commodities. In terms of the percentage of production placed under loan since 1985, cotton and rice have the highest usage of the loan program. This indication of usage has fallen for all commodities since the 2008 Farm Bill. Also, it should be noted that this illustration does not include LDP’s because if a farmer uses the LDP provisions the commodities are not placed under loan. Farmers can receive deficiency payments if prices are below loan rates on the commodity placed in the program. 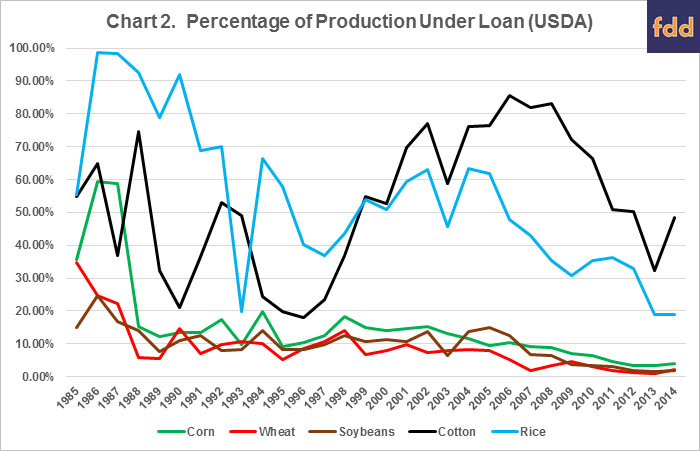 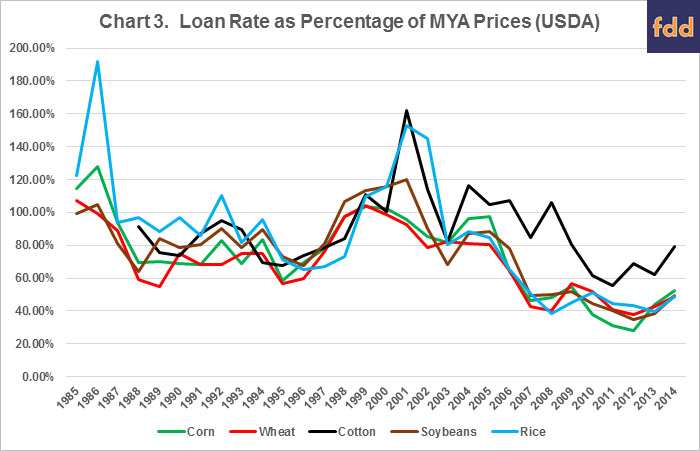 In conclusion, this article provides historical background on the Marketing Assistance Loan program that was reauthorized in the 2014 Farm Bill and will be reconsidered in the upcoming reauthorization debate. More evaluation of the program is needed, particularly as to the relationship between loan rates and market prices, impact on farm budgeting and matters with regard to decoupling and compliance with WTO commitments. Further evaluation is also needed on LDP’s and their use by farmers, as well as impact on farm budgeting and relation to other commodity support programs. Future articles will look into these matters, as well as further analysis of the other programs.

Jonathan Coppess, The Fault Lines of Farm Policy, forthcoming, U. of Neb. Press 2018.