Per acre seed costs for corn likely will not significantly decrease until corn acres decline. Seed companies have little incentive to reduce prices under stable or growing acreages. In 2017, world corn acreage declines do not suggest large decreases in 2017 per acre seed costs. In recent years, farmers have shown a reluctance to switch from corn to other crops. At this point, the economic situation looks much the same for 2018 as it did for 2017, suggesting that corn acreages will not decrease, resulting in stable per acre seed costs into 2018. 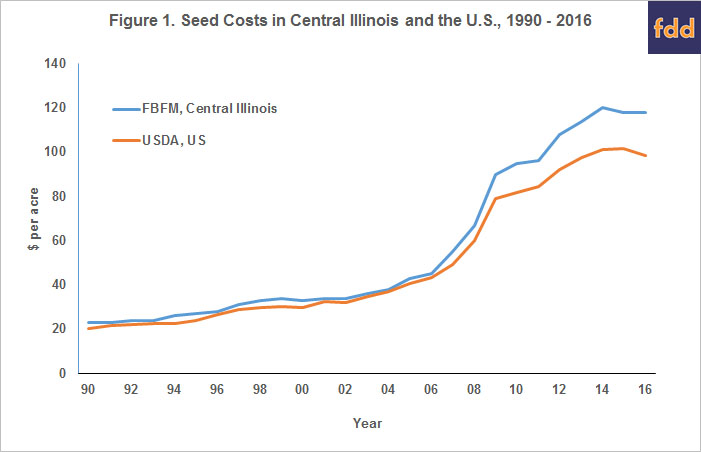 While the data come from different sources, the series follow each other closely. The correlation coefficient between the two series is .99.

Seed Costs Relationship to Corn Acres in the World

An extremely strong relationship exists between per acre seed costs and harvested corn acres in the world (see Figure 2). Between 1990 and 2016, seed costs per acre increased as corn acres in the world increased. A simple linear regression was used to explain seed costs in central Illinois per acre was explained by world corn acres. This regression explains 95% of the variability in seed costs between 1990 and 2016. Adding other explanatory variables – such as corn price, expected corn yield, or time – do not add to the explanatory power of the relationship. 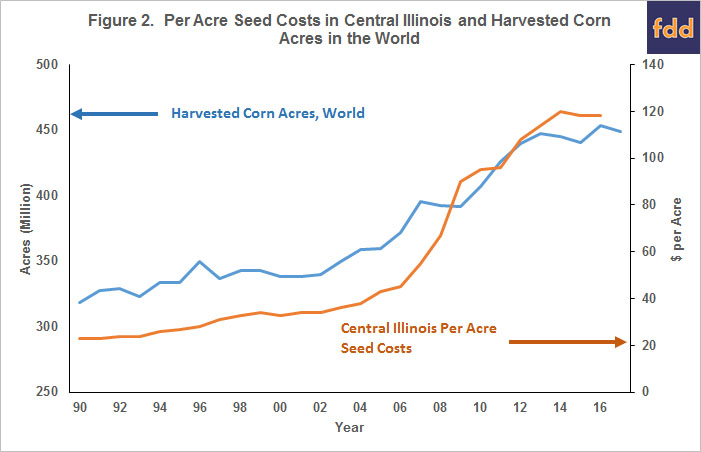 The economic intuitions behind this relationship are straightforward. Corn acre increases usually are associated with increases in the profitability of corn relative to other crops. Because of profitability increases, farmers have additional funds for making seed purchases. Seed companies then are presented opportunities to increase both the quantity of seed sold due to increases in demand, but also can increase seed prices because farmers in the position to pay for the higher seed prices.

An environment where world corn acreages are decreasing could produce the opposite dynamic. The total size of the seed market would decrease. Seed companies then may have an incentive to lower seed prices in the hopes that price decreases stem some of the movement away from corn acres. While prices may decline given lower corn acres, there is little data to support this contention. There have been no extended periods of corn acreage decreases since 1990. Corn acres increased in 16 out of the 27 years between 1990 and 2017 (see Figure 2). When they did occur, declines were modest. Therefore, suggesting the impacts of corn acreage decreases on seed prices is speculative.

Seed companies experienced rapid growth in revenue from 2006 through 2014. Not only did seed quantities increase because of increasing corn acres, but the prices on seeds were increasing as well. Both price and quantity increases resulted in growing revenue.

Rather than being in an environment of growing acres, seed companies now face an environment of relatively stable corn acres. When faced with a stable environment, a strategy for seeking growth is to increase market share. One way to increase market share would be to decrease seed corn prices. Reducing seed price would make that seed company’s product more attractive to farmers relative to other companies’ seeds. However, the other seed companies likely would lower seed prices in response to the first seed company lower prices. Corn acres may not change because of seed price changes. After several companies lower their prices, all seed companies could face lower revenue because seed prices have come down while the quantity of seed sold has not increased.

Compared to price decreases, seeking mergers could be viewed by management as an attractive way for seeking growth. The merged company could have the potential to develop new technologies that combine the two companies’ strengths. The resulting new technologies could offer farmer additional value opportunities for which those farmers would be willing to pay a higher price, resulting in revenue growth to the merged company.

Recent history of seed corn and acreage changes, along with seed company motives, suggests that per acre seed costs should not be expected to decrease until corn acreage decreases in the world occur. According to the Foreign Agricultural Service, corn acres harvested will be down by 1% in 2017, but will still be the second highest acreage in recent history (see Figure 2). The 2017 world acre figure does not result in a large decrease in seed costs.

Farmers have shown a reluctance to switch away from corn to other crops. In Illinois, soybeans have been more profitable than corn since 2013 (farmdoc daily, July 7, 2016). Even given these profitability differences, shifts from corn to soybeans have been relatively modest. At this point, the economic situation for 2018 likely will be much the same as in 2017, suggesting the same plantings as in 2017. As a result, per acre seed costs in 2018 likely will be like those in 2017.