Focus soon will turn to 2017 yield estimates as USDA will release their first estimates of national and state yields on August 10th. In preparation for this release, national corn yields from 1972 to 2016 are shown in this article. These national trends illustrate that corn yields have been above trend in all years since 2013. Also, maps are shown giving county yield deviations from trend for each year from 2012 to 2016. These maps illustrate the extreme variability in yields across counties in any given year, making it difficult to evaluate national yields given only a perspective from a limited area. Comparisons of 2017 drought maps to those from previous years suggest a U.S. yield near or below trend. 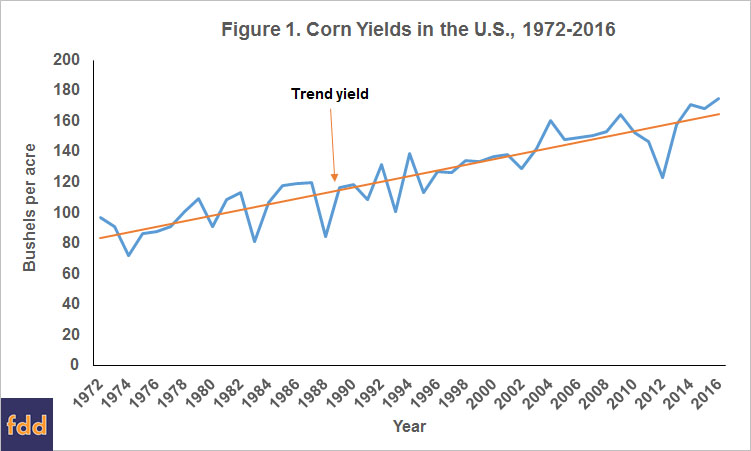 The following sections show maps giving county yields minus trend yields for the years from 2012 to 2016 (see farmdoc daily May 2, 2017 for an explanation of the calculation mechanism. These yields come from National Agricultural Statistical Service’s QuickStat website. Also shown are U.S. Drought Monitor maps (http://droughtmonitor.unl.edu/) produced at the University of Nebraska. The map for each year comes at the end of July. End of July is at the end of pollination, a key period for determining corn yields. Areas in drought at the end of July likely had stress during pollination. The maps illustrate that below trend yields are correlated with areas as indicated in drought, but the correlation is not perfect.

The national yield in 2012 of 123.1 bushel per acre was 34 below trend. The 2012 drought impacts most areas of the Midwest and many counties in eastern Nebraska, Iowa, Illinois, Indiana, and Ohio had actual yields that were 25 bushels below trend (see Figure 2). The 2012 drought was widespread and severe as is indicated by the Drought Monitor Map on July 31, 2012 (see Figure 3). 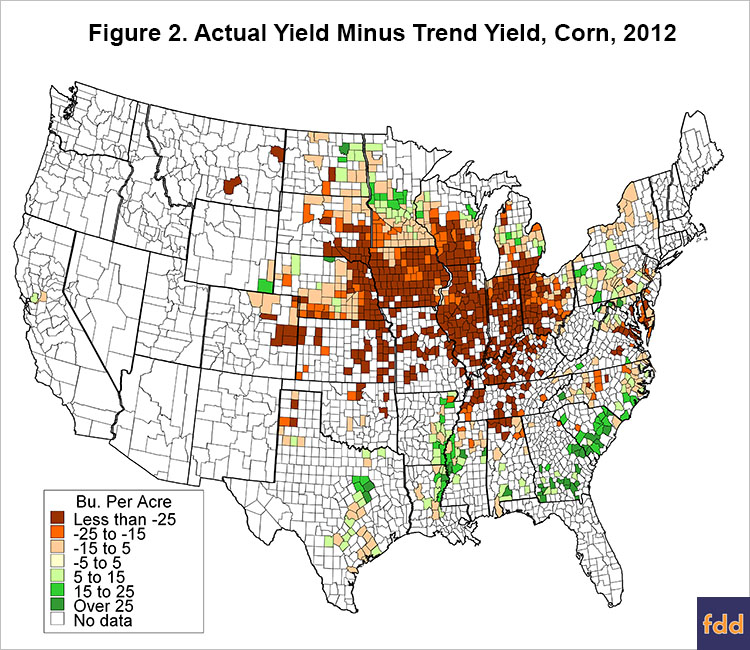 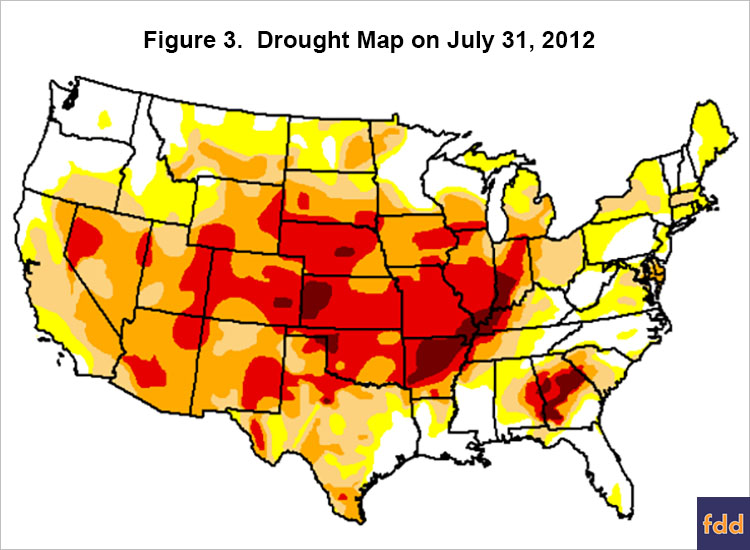 Two points about the drought year. First, most areas of the countries had to be impacted by the drought for the national yield to be as low as it was in 2012. Second, even given the widespread nature of the drought, there were counties that had above average yields. Central Minnesota, the Mississippi Delta, and South Carolina had significant number of counties with above trend yields (see Figure 2). 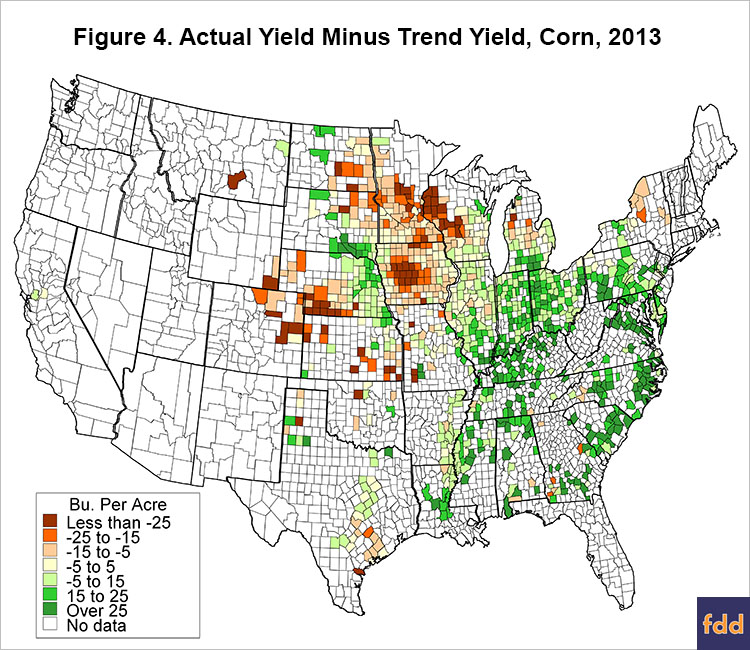 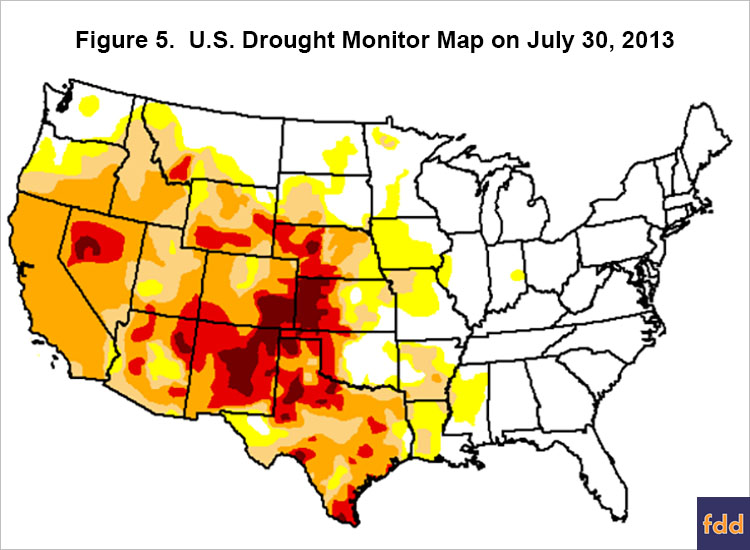 The low yields in Minnesota were not associated with a drought, as can be seen by the July 29, 2014 drought monitor map (see Figure 7). 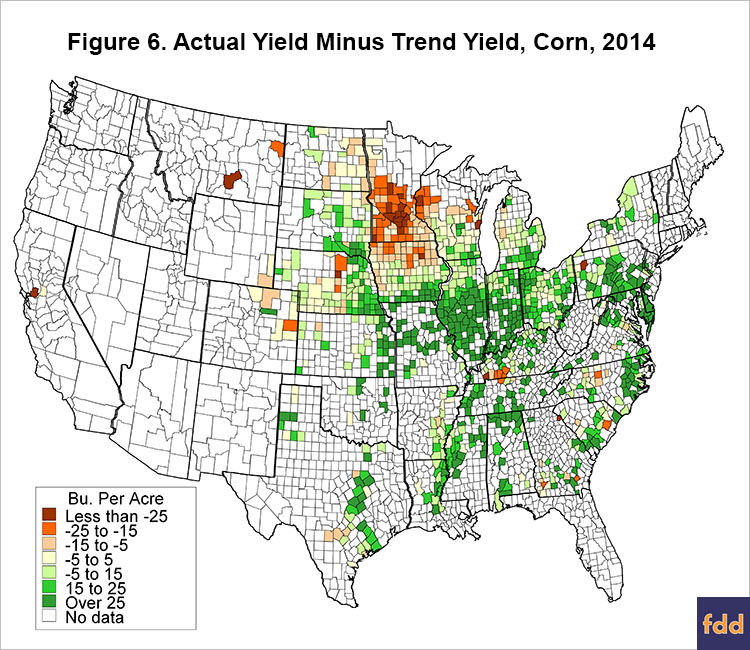 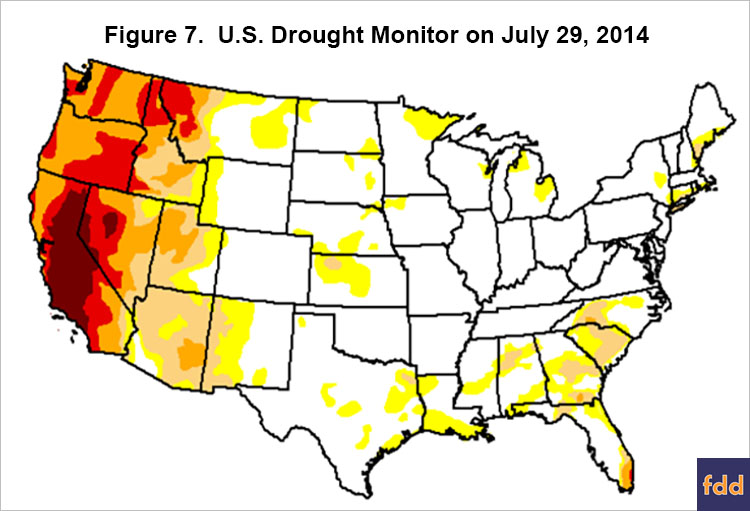 Like 2014, there was an area of counties with below trend yields. This year those counties were in northern Indiana and western Ohio (see Figure 8). These areas were not associated with drought (see Figure 9). In addition, many counties in west central Illinois had counties yields that were more than 5 bushels below trend. Rather it was wet weather that injured crops. Iowa, Minnesota, South Dakota, and Nebraska had yields above trend. 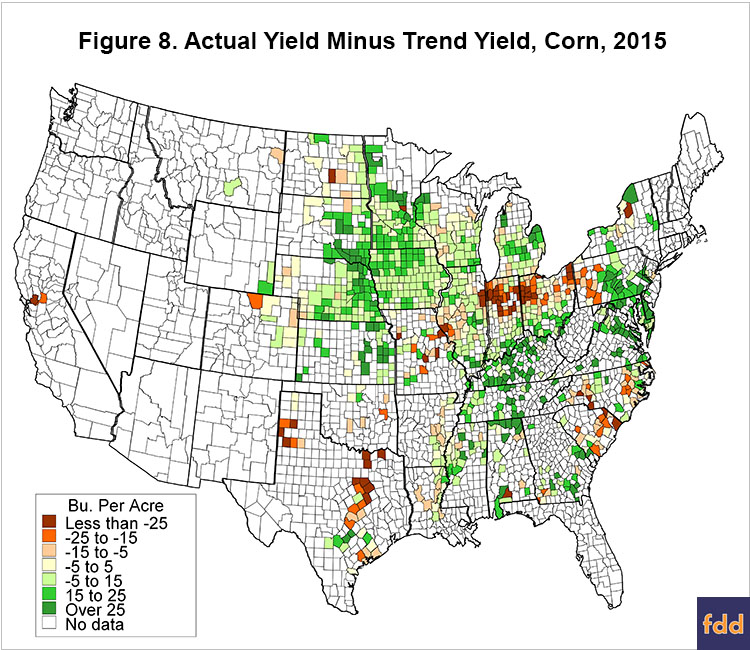 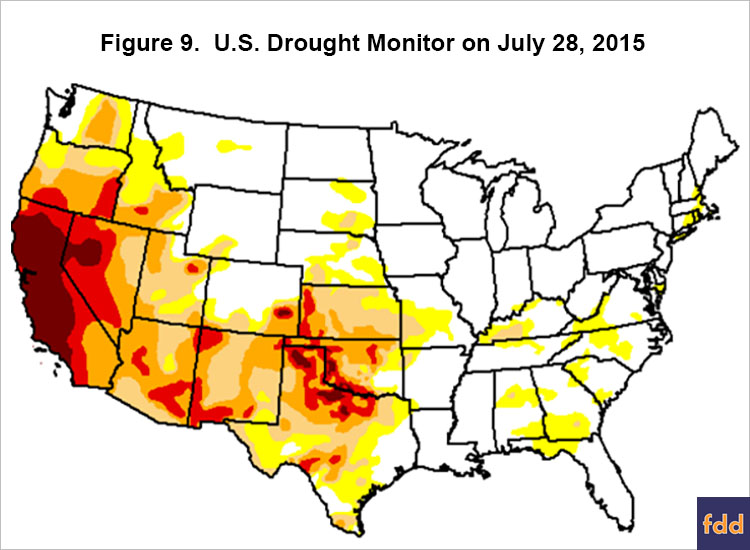 In 2016, low yielding counties were focused in Ohio (see Figure 10). Indiana generally had close to trend yields and not an exceptional year. Areas of lower yield were associated with a drought (see Figure 11). Illinois had many counties that were over 25 bushels above trend. Good yields predominated in the western Corn Belt as well. However, there were many counties in southern Minnesota and northern Iowa that were close to trend. 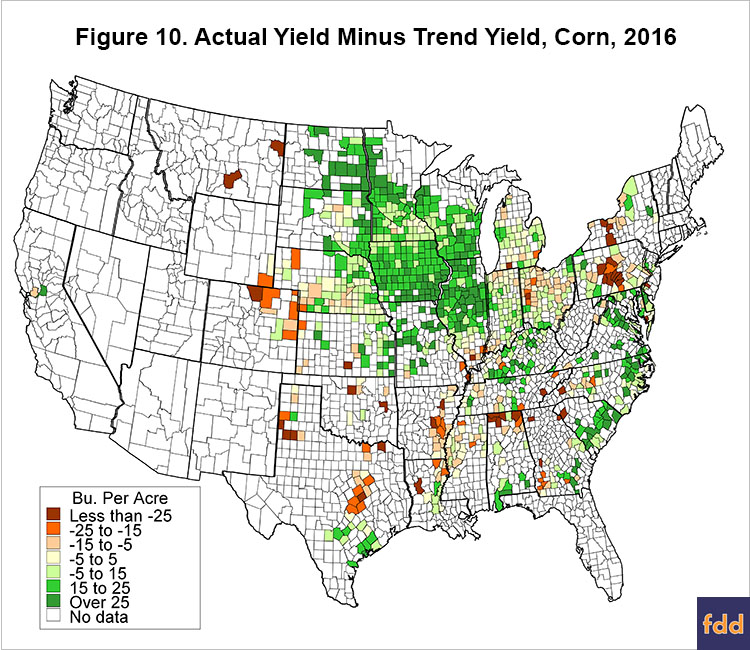 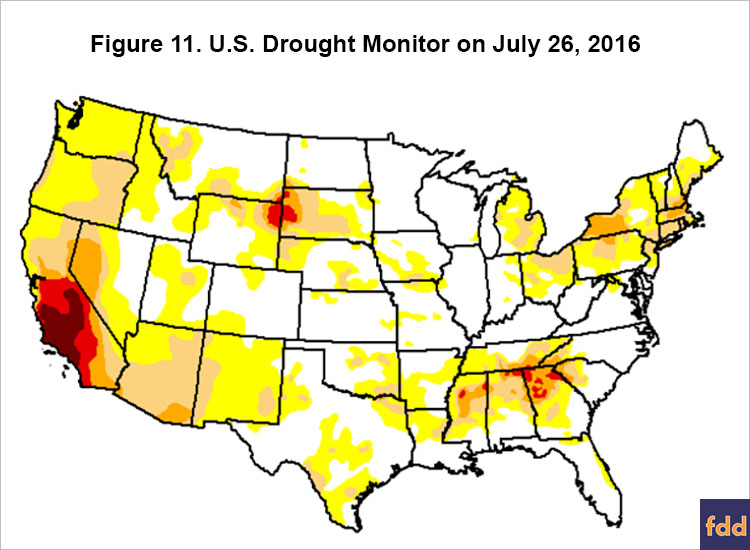 Commentary and Pointing to 2017 Corn Yields

National yields mask a great deal of variability in yields across the country. In almost every year, there are significant differences in county yields even across the Corn Belt. Only in extreme years do all counties tend to have above or below average yields. 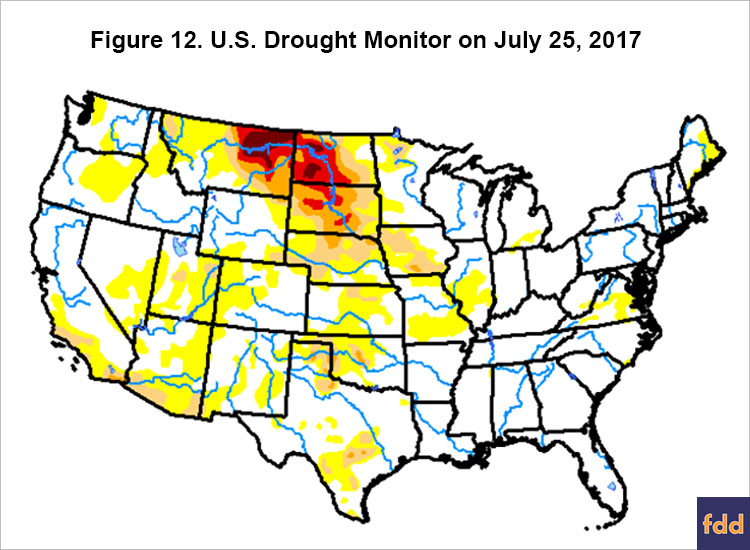 This year does is not a year like 2012 in which yields were severely damaged. This year also does not appear to be a year like 2014 and 2015 in which national yield was well above trend. Overall, 2017 national yield appears to be near or below trend given the current drought monitor map and anticipated wet weather difficulties in Indiana. More will be revealed as yield tours occur and NASS releases its yield estimates.

Schnitkey, G. "Areas of Above and Below Trend Yields in the Corn-Belt: These Areas Will Change." farmdoc daily (7):80, Department of Agricultural and Consumer Economics, University of Illinois at Urbana-Champaign, May 2, 2017.