In this article, historical payments from Margin Protection are estimated and compared to Area Revenue Protection. Both insurance contracts have the harvest price option. The example is for corn in Sangamon County Illinois from 2000 to 2016. Due to limits on cost data, only payments resulting from changes in yields and commodity prices are compared. The example suggests overall payments between Margin Protection and Area Risk Plan likely will be highly correlated but payments in any given year can vary from one another. In this article, we do not consider reductions in Margin Protection payments if purchased along with another insurance product.

Table 1 shows the calculation of expected margin for a Sangamon County, Illinois corn example. Note that the parameters for this example were taken from the Margin Protection website on September 18th. Discovery periods for prices are over. Thus, prices should be close to final. However, expected yields for 2018 corn were substantially revised on September 14th. In Table 1, the 2018 expected yield for Sangamon County is 197.2 bushels per acre, up by 6.6 bushels from the prior value of 190.6 bushels per acre. A 197.2 versus 190.6 expected yield will have large impacts on guarantees. Expected yields for 2018 are not final and could change from the value used in this article. Note, for some counties, the September 18th revision reduced their estimated 2018 expected yields by a substantial amount. 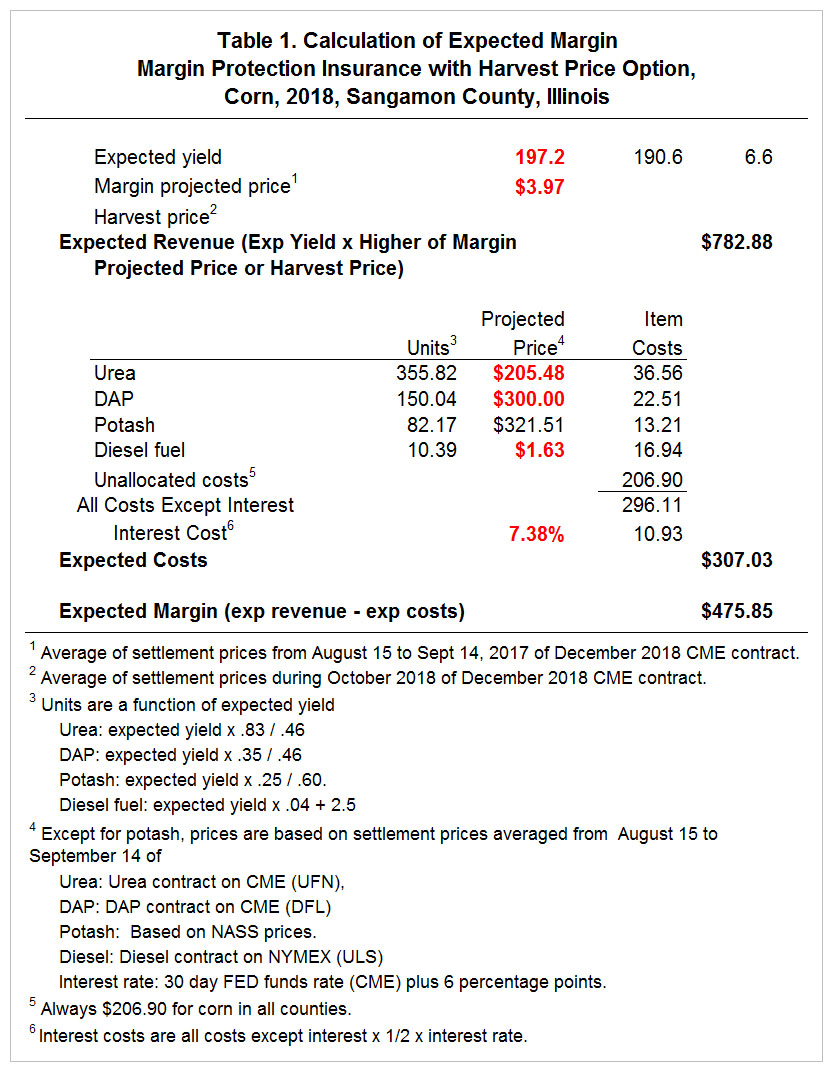 The same formula is used when calculating the harvest margin but six yields / prices are updated to reflect their value during the final discovery period. The six items that can change are noted in red in Table 1 and include:

Note that none of these six values are farm yields, farm output prices, or farm input prices.

In the following section, variability in the input prices are illustrated. This then is followed by an example of how yields and corn prices have varied over time.

Panel A of Table 2 shows how input prices would have varied from 2014 to 2017. Also listed are 2018 expected prices. Unfortunately, long time series of consistent urea and DAP prices do not exist. Specification of fertilizer contracts have changed over time resulting in inconsistent price series. The urea and DAP contracts that Margin Protection currently uses are thinly traded. Total trades during the discovery period (August 15 to September 14) for the urea contract were 0 in 2014, 15 in 2015, 15 in 2016, and 0 in 2017. No trades have occurred in the DAP contract during the August 15th to September 14th period from 2014 to 2016. When trades do not occur, the exchange has rules for setting settlement prices, which then go into the calculation of expected and final prices for Margin Protection. While unlikely, a concern could be that a few trades could have a dramatic impact on expected or final prices. Price movements could increase or reduce the chances of Margin Protection making payments. 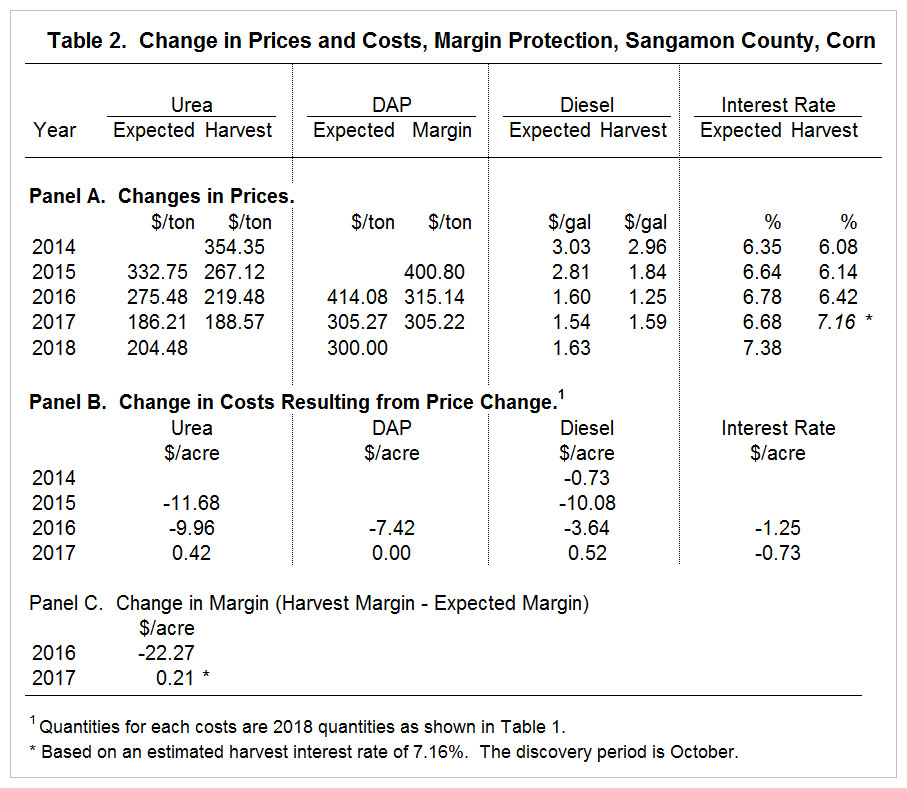 Impact of each price change on the margin is calculated using quantities specified in the margin contract for Sangamon County, Illinois (Panel B of Figure 2). For example, the urea price movements would have resulted in these changes in per acre cost: $11.68 decrease in 2015, $9.96 decrease in 2016, and $0.42 increase in 2017.

Based on changes in all prices, cost per acre decreased by $22.27 in 2016 and by $0.21 in 2017 in Sangamon County (see Panel C of Table 2). A reduction in costs means a larger decline in revenue would have to occur before Margin Protection would make a payment

The Role of Differences in Corn Price

A historical backcast of Margin Protection with the harvest price option (MP-hpo) are shown for corn in Sangamon County in Table 3. Importantly, these insurance payments are calculated given that prices of costs stay the same. As noted in the previous section, cost decreases would reduce payments and vice versa. MP-hpo payments are shown for 90% and 95% coverage levels. Also shown for comparison purposes are Area Risk Protection (ARP) at the 90% coverage level. The payments in Table 3 are calculated for a 1.0 protection factor for MP-hpo and ARP. 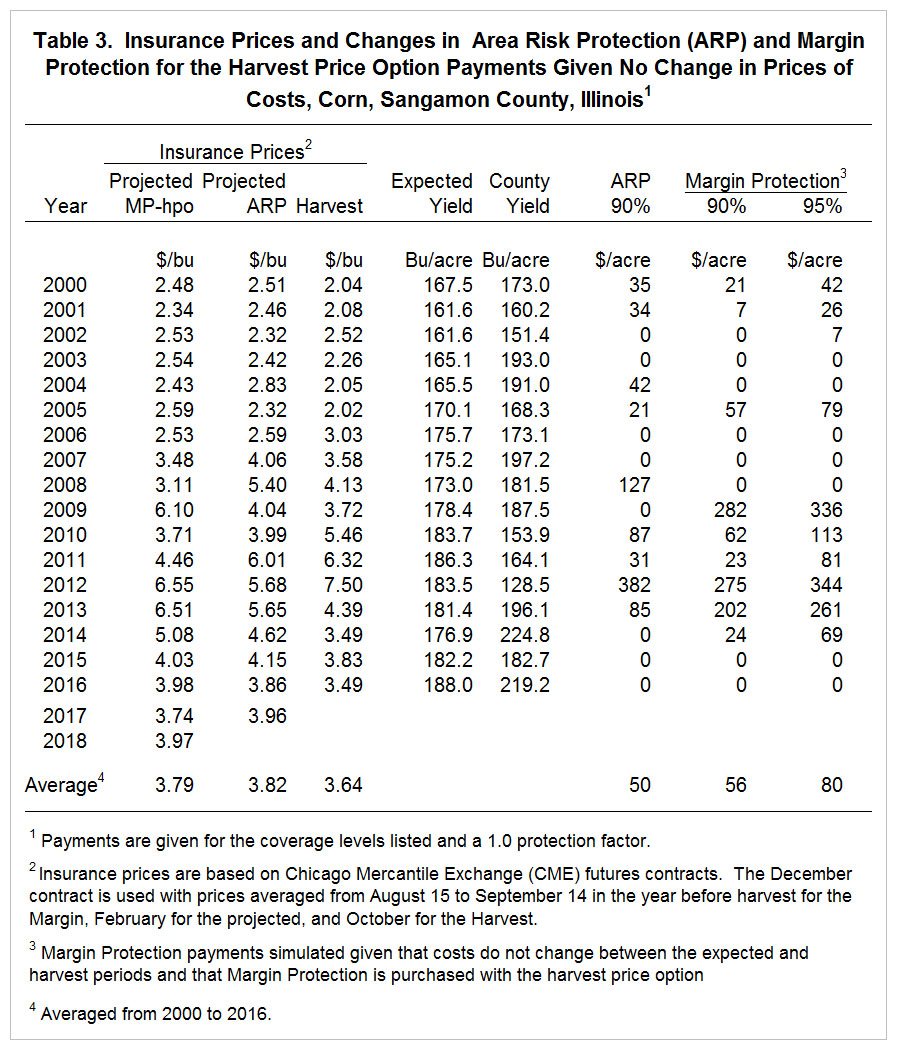 The converse also has occurred. Projected price was higher for ARP in the following years, resulting in higher simulated payments for ARP:

Over time, one would expect the impact of the differences due to different price discovery periods to even out. To take advantage of this difference, a farmer would in essence need to be able to profitably trade the price of the crop. In other words, for 2018, the farmer would need to be able to accurately forecast by September 30, 2017 the change in the CME December 2018 corn price between August-September 2017 and February 2018.

Also note that payments will differ between MP-hpo and ARP in years in which the guarantee prices are the same for the two products. This is most likely to occur in years when the harvest price is above the MP-hpo and ARP projected prices. In these cases, guarantee revenue is the same between both products. In those years, ARP payments will be as least as great as the MP-hpo at the same coverage level. This occurs because of differences in payments mechanisms between the two products. Between 2000 and 2016, this situation caused differences in payments in two years:

One reason an ARP user may switch to MP-hpo is that its projected price is set earlier than for ARP. As shown above, setting the price earlier will have advantages in some years. However, it is difficult to predict which years that advantage will exist.