The Illinois Nutrient Loss Reduction Strategy (INLRS) and other statewide efforts to reduce the loss of nutrients from modern farming include farmer adoption of cover cropping practices as one of the priorities (see, farmdoc daily, March 17, 2016). These efforts are increasing pressure on farmers to adopt conservation practices and innovate in their fields. Innovation brings with it concerns and risk, requiring further research and analysis. An initial policy-based concern is whether crop insurance creates disincentives to adoption and innovation. With an eye on the farm bill debate, this article reviews how crop insurance currently addresses cover cropping practices.

At nearly $8 billion in outlays per year, crop insurance is the largest and most important component of the Federal safety net for American farmers. USDA’s Risk Management Agency (RMA) reports over 1 million policies on more than 300 million acres, totaling more than $100 billion of insured liability (RMA, Summary of Business Report). The directives issued by the Federal Crop Insurance Corporation (FCIC) and RMA impact a large swath of farming, farmland and the natural resource base. While adoption of cover crop practices appears to be trending upward, it remains only a fraction of farmed and insured acres (SARE, 2016 Cover Crop Survey).

The Federal Crop Insurance Act (FCIA) requires that losses to crops “must be due to drought, flood, or other natural disaster” to be covered by insurance (7 U.S.C. §1508(a)(1)). Crop insurance will not cover losses that were caused by the “neglect or malfeasance of the producer” nor will it cover losses due to the “failure of the producer to follow good farming practices, including scientifically sound sustainable and organic farming practices” (7 U.S.C. §1508(a)(3)(A)). FCIC regulations add that crop insurance will only “protect against unavoidable, naturally occurring events” and will not cover “[a]ny act by any person that affects the yield, quality or price of the insured crop,” including “[f]ailure to follow recognized good farming practices for the insured crop” (7 C.F.R. §457.8).

Through good farming practices, along with policies and associated procedures, RMA has long recognized the use of cover crops and provided guidance on termination. To provide additional clarity and bring consistency to cover crop guidelines across USDA, an interagency workgroup consisting of RMA, the Natural Resource Conservation Service (NRCS) and the Farm Service Agency (FSA) produced the NRCS Cover Crop Termination Guidelines, first issued in 2013 (NRCS, Cover Crop Termination Guidelines). RMA issued further guidance in 2016 as the termination guidelines were updated and revised (see, RMA, Frequently Asked Questions (FAQ), August 3, 2016). RMA has incorporated cover crop management guidance for insured crops that requires a cover crop meet “the definition provided in the basic provisions” and be “managed and terminated according to NRCS guidelines” in order for the commercial crop to remain eligible for insurance coverage and losses covered.

Included in this guidance are requirements for termination based on NRCS. The following map was produced by NRCS and provides the general termination zones used by RMA; farmers within each mapped region must terminate cover crops according to this guidance or risk losing insurance coverage. 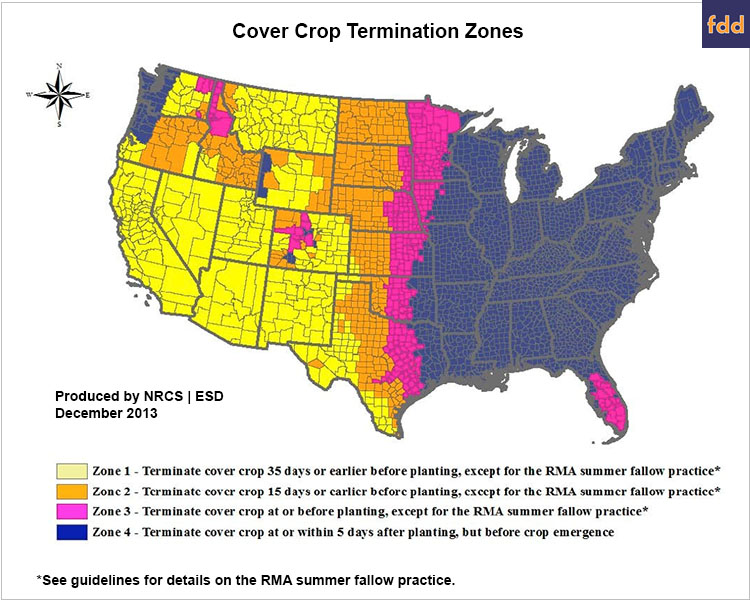 In addition, RMA publishes Final Agency Determinations (FAD) that interpret the statute and regulations for all participants in the Federal crop insurance program. FAD interpretations are considered final, binding and generally applicable, providing guidance to all insurers and insured farmers.

(1) Prevented Planting and Cause of Loss

The date (or growth stage) of termination is a critical factor for cover crops and “practices that have been defined as good farming practices by agronomic experts” can still result in loss of insurability. The risk here is that RMA will conclude that the cover crop and the commercial crop were “interplanted” and thus not covered by insurance. Interplanting results from planting different crops in the same field at the same time in a manner that does not permit “separate agronomic maintenance or management and harvest” (RMA, August 3, 2016, FAQ). As such, RMA has found that “[t]wo crops may be produced using good farming practices but still be planted in such a manner that does not allow separate agronomic maintenance or harvest” and would not be insured (FAD-210, March 13, 2014).

These decisions highlight some of the challenges facing farmers and the insurance program considering cover crop practices. The crucial point is whether the loss is determined to be due to the farmer’s management decision or an acceptable cause of loss such as weather. Where the farmer’s management decision on which practices to use appears to be the reason she or he was prevented from planting, the loss is not covered. Therefore, if the cover crop practice is found to be the reason the farmer was unable to plant, then the farmer is likely not covered. RMA has taken steps to clarify cover crop practices in the insurance setting but RMA cannot go beyond the statute; the FCIA does not authorize coverage for causes other than drought, flood, or other natural disasters. The farm bill could add further clarity, such as by defining the term cover crop, revising the area conditions requirement or similar changes to 508A. Importantly, however, this would only address the prevented planting question and not cause of loss issues for yield loss.

As discussed above, insurability partially depends on the farmer having used good farming practices. Simply stated, this is to avoid the moral hazard of a farmer collecting insurance indemnities by purposefully causing the crop to fail; coverage is only for those losses due to weather or other natural causes beyond the farmer’s control. Good farming practices are defined in the regulations and are included in the Good Farming Practice Determinations Handbook. In general, they are practices “recognized by agricultural experts for the area” that allow the insured crop “to make normal progress toward maturity and produce at least the yield” insured (RMA, “Good Farming Practice Determination Standards Handbook“). Like farming, these practices will vary by region and crop with local extension agents and certified crop consultants typically serving the role of agricultural experts.

Pursuant to good farming practices, a cover crop must be “generally recognized by agricultural experts as agronomically sound for the area” (RMA, FAQ, Aug. 3, 2016). RMA also states that a cover crop that is not terminated “according to NRCS guidelines” will not be considered a cover crop, which “may adversely affect the insurability of the following crop” (RMA, FAQ, Aug. 3, 2016). Termination requires that growth of the cover crop has ended and failure to terminate according to NRCS Guidelines means that the commercial crop will not be covered by crop insurance. As discussed above, this tends to result in a finding that the commercial crop and cover crop were interplanted. This makes cover crops unique within the term good farming practices and may present an additional barrier to adoption of the practice. It can also raise concerns about whether the guidelines can keep up with innovations in the field and thus risk stifling innovation over the long run. Here again the farm bill could bring clarity for farmers and insurers about the treatment of cover crops including whether they can be considered interplanted absent malfeasance or neglect on the part of the farmer.

Nutrient loss reduction strategies have placed a priority on the adoption of cover cropping practices but uncertainty about the impact of the practice on a farmer’s crop insurance coverage may be a barrier to adoption. Given the importance of crop insurance to the farmer, the uncertainties about insurance and cover crops could be a barrier that works against nutrient loss reduction strategies. As Congress debates the next farm bill, minor changes to the FCIA could remove those barriers or substantially lower them. Specifically, Congress could eliminate the specific termination requirements from good farming practices and further clarify how prevented planting will apply in cases of cover crops not terminated because of weather events. Further analysis of any changes will be needed and will depend on the specific wording proposed for the statute, but lowering or eliminating the barriers could be important to further nutrient loss reduction goals.