Average net income on Illinois grain farms is forecast at around $60,000 per farm in 2017. This forecast is for a composite of grain farms enrolled in Illinois Farm Business Farm Management (FBFM). In 2016, these farms had an average income of about $94,000 per farm. Incomes in 2017 are projected lower because of lower corn prices, lower soybean prices, and lower Agricultural Risk Coverage (ARC) payments. Partially offsetting these reductions are lower non-land costs. Overall, 2017 net farm incomes could have been worse as yields on many farms turned out better than expected. Still, deterioration of working capital on most farms should be expected. As always, incomes will vary across farms, with some farms having higher incomes in 2017 than in 2016. Those farms with below average yields will have lower incomes and could potentially face more financial stress.

Income is forecast by first estimating yield, revenue, and cost differences from 2016 to 2017. Differences are summarized in Table 1 and represent averages for Illinois. The goal of these calculations is to arrive at an average per acre income difference from 2016 to 2017. The average difference is estimated at $19 per acre of less income in 2017 as compared to 2016 (see the final line in Table 1). Items contributing to this reduction are described below. 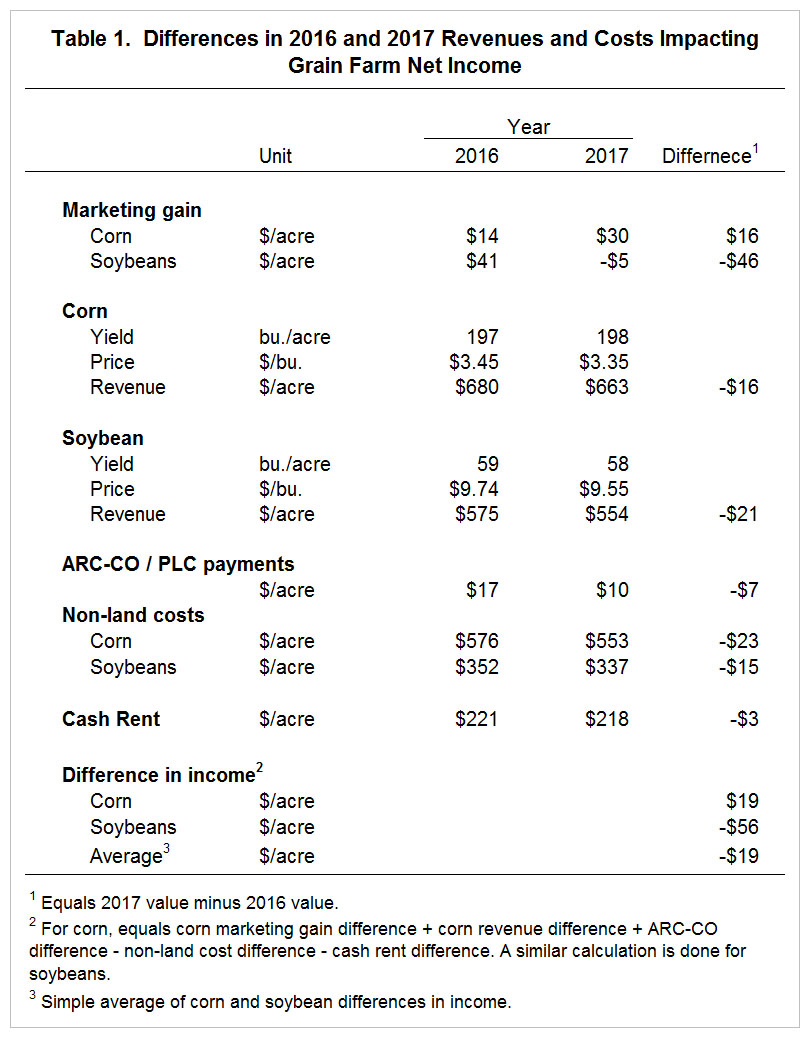 Note that these ARC-CO payments are received a year after production. In the fall of 2016, farmers and land owners received 2015 payments which averaged $36 per acre. The ARC-CO payment received in the fall of 2017 will average about $17 per acre, much lower than in 2016. This suggests that cash flow will be lower in 2017 than is indicated by changes in accrual income.

A $19 decrease in per acre income results in lower projected 2017 per farm incomes as compared to 2016. Figure 1 shows average income for grain farms enrolled in Illinois Farm Business Farm Management (FBFM). These are per farm income. The -$17 per acre difference suggests a 2017 net income of around $60,000 per farm. 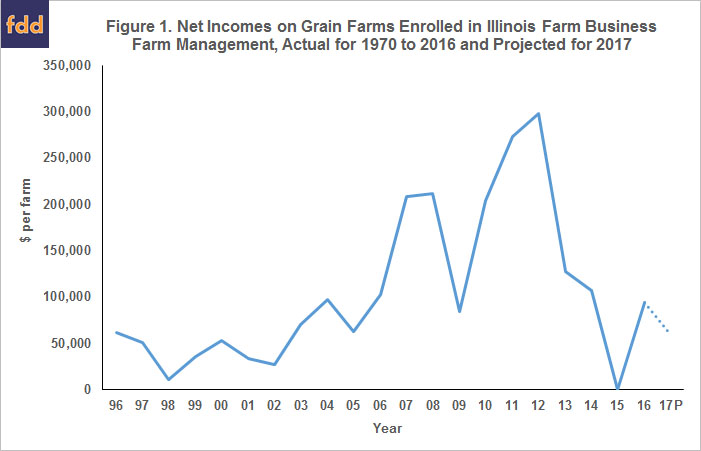 Historical values in Figure 1 are from an average of farms located across Illinois. These farms vary in geographical location, size, land control method, and financing. On average, the farms have an average size of 1,500 acre, but there is a considerable range. There is a subset of farms that are over 5,000 acres and another sub-set that are smaller than 1,000 acre.

According to USDA forecasts, corn and soybean yields in Illinois will average above trend levels. These relatively high yields will provide a higher level of income than many expected during mid to late summer.

Overall, average net income levels will result in deterioration in working capital on many farms, a continuation of the trend that has been occurring since 2013. As a result, attention will continue to be focused on lowering costs and other cash flows to meet these shortfalls.

As always, there will be considerable variability in income across farms. Those farms that have higher yields will have higher incomes than those farms with lower yields. The amount forward contracted could also play a role in the distribution of incomes across farms. Prices during late winter and early spring for 2017 harvest-time delivery were higher than most fall delivery prices, particularly for soybeans. Those farmers that forward contracted more could have higher relative incomes than those that did not contract as much.

Even at this late time in the year, 2017 incomes could differ from the forecasts shown here. Incomes are greatly influenced by end-of-year prices used to value inventory. Any material differences from the $3.35 corn price and $9.55 soybean price used in forecasts will result in a different income forecast.