At this juncture in the debate over the next farm bill, two of the most discussed issues are what to do with commodity policy for cotton and dairy. Key considerations are the costs associated with (1) enhancing the dairy safety net and (2) making seed cotton eligible for ARC (Agriculture Risk Coverage) and PLC (Price Loss Coverage) payments. This article examines actual spending on dairy and cotton in the 1996, 2002, 2008, and 2014 farm bills and explores implications for future spending.

Data: The U.S. Department of Agriculture, Farm Service Agency (FSA) reports outlays made by CCC (Commodity Credit Corporation) on commodity programs in what is referred to as Table 35. CCC is responsible for the financial side and some operational aspects of commodity and other programs. Table 35 provides consistent data beginning with FY1978 (Fiscal Year 1978). However, it has not been updated since FY2016. Recent expenditures are from the CBO (Congressional Budget Office) baseline for farm programs for FY2016 and FY2017. CBO estimates for FY2018 are adjusted for differences between CBO’s estimate for ARC-CO and PLC payments and actual payments reported by FSA so far for FY 2018. Spending estimates for other programs in the baseline are not adjusted. See data note 1 for additional data analysis details.

This study starts with the 1996 farm bill. It eliminated annual acreage set asides and most public stock programs. Both types of programs can provide significant support by reducing supply available to the market and increasing prices. Prior to 1996, total commodity support thus equals program payments plus the higher income due to acreage set asides and public stocks. Spending is compiled for dairy and individual crops for which data are available for all years. These crops are barley, corn, cotton, oats, peanuts, rice, sorghum, soybeans, and wheat.

Dairy: Under the 2014 farm bill, milk producers have paid slightly more in premiums than they received in payments from the MPP (Milk Margin Protection) program, resulting in spending that rounds to zero. MPP is a new milk price – feed cost margin program begun by the 2014 farm bill. Under the 3 prior farm bills, dairy’s share of total CCC outlays for the 9 crops plus dairy ranged from 4% to 6% (see Figure 1). 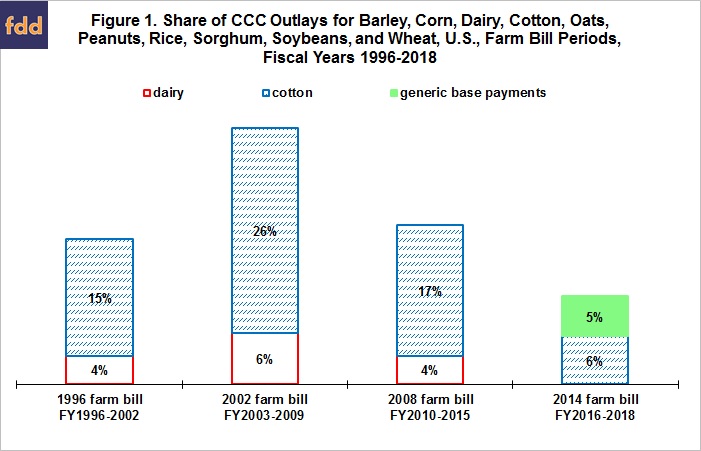 The relatively stable share over the 1996 through 2008 farm bills is noteworthy as major changes occurred in dairy policy. CCC made net purchases of dairy products in conjunction with the milk price support program under all 3 farm bills, but the 2002 and 2008 farm bills also authorized the MILC (Milk Income Loss Contract). MILC was a milk price deficiency payment program.

Cotton: Cotton’s share of CCC outlays for dairy and the 9 crops was 15% and 17% during the 1996 and 2008 farm bills (see Figure 1). Its share was 26% during the 2002 farm bill, but Brazil successfully challenged this farm bill’s cotton program at the WTO (World Trade Organization). Cotton’s share of spending so far under the 2014 farm bill is 6%. In addition, generic base acres have accounted for 5% of CCC spending. Generic base was created by the 2014 farm bill as a repository for former cotton base in the 2008 farm bill (see, farmdoc daily, April 13, 2017 and April 20, 2017). Under the settlement of Brazil’s WTO case, upland cotton base acres are ineligible for ARC/PLC payments. However, generic base acres can receive ARC/PLC payments if a covered commodity is planted on the generic base and ARC or PLC is elected for the crop planted on generic base. Payments to genetic base acres total $149, $444, and $501 million for FY 2016, 2017, and 2018, respectively.