The ethanol industry has been much in the news in recent months with the ongoing political battle over the future of the RFS (e.g, farmdoc daily, February 28, 2018). It is easy to lose track of what is actually going on with the ethanol industry itself in this environment. Ethanol production profits were quite strong over 2013-14, moderated over 2015-2016, and appeared to take a further dip in 2017. We estimate the profitability of U.S. ethanol production in 2017 and find that it did indeed drop compared to recent years. We explore the reasons for this drop in profitability.

A model of a representative Iowa ethanol plant is used to track the profitability of ethanol production. It is the same basic model that has been used the last several years in numerous farmdoc daily articles to estimate the profitability of ethanol production in the U.S. (e.g., March 5, 2015; January 6, 2016; February 1, 2017). The model is meant to be representative of an “average” ethanol plant constructed in the last decade. There is certainly substantial variation in capacity and production efficiency across the industry and this should be kept in mind when viewing profit estimates from the model. Some of the model assumptions include:

Figure 1 presents the three components of plant revenue per gallon–ethanol, DDGS, and corn oil–on a weekly basis from January 26, 2007 through March 2, 2018. The chart shows that ethanol prices (net of netback marketing costs) started 2017 at historically low levels of about $1.30 per gallon, rose to a peak of about $1.60 in June, and then fell most of the rest of the year, reaching a low of $1.17 in late December. The December low was very close to the lowest weekly price for ethanol in this time period ($1.15). DDGS prices were low for most of 2017, but started rising sharply last fall, a trend that has continued into 2018. The combination of low ethanol and DDGS prices depressed total revenue throughout 2017, with an annual average total revenue $1.76 per gallon, easily the lowest over this period. Figure 2 shows the four major cost components for producing ethanol. The cost of corn is the major input cost, about 70 percent of variable and fixed costs on average, and since the price of corn was relatively stable in 2017, total costs tended to fluctuate in a relatively narrow band of about $1.45 to $1.55 per gallon. 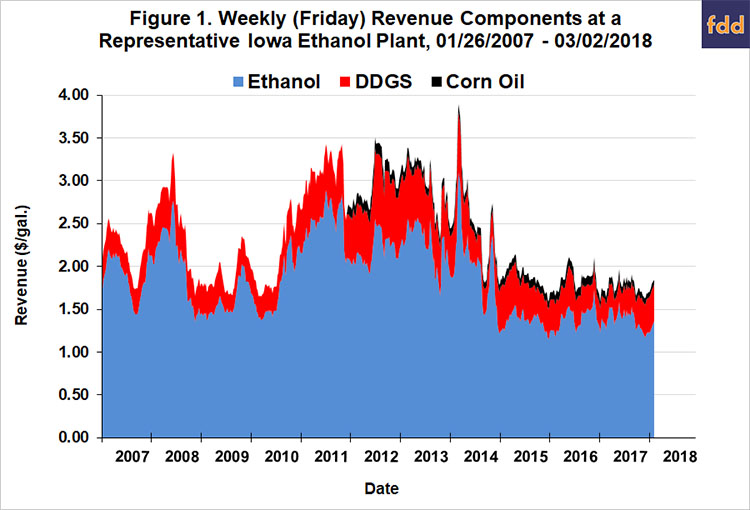 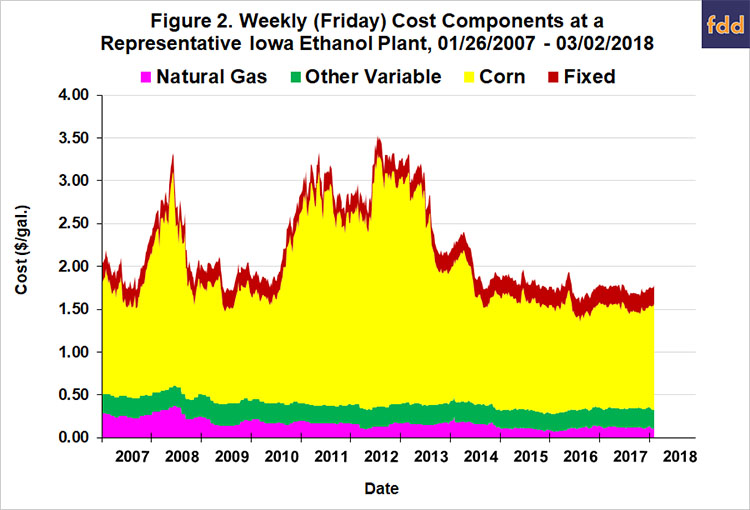 Figure 3 presents (pre-tax) estimates of ethanol production profits net of all variable and fixed costs. Net profits in 2017 averaged only $0.03 per gallon, compared to $0.12 in 2016 and $0.07 in 2015. Two patterns stand out in the data on net profits for 2017. First, profitability was negative for the most number of weeks since 2012. Second, profitability declined substantially in the fourth quarter of the year. After reaching a peak for the year of $0.22 in mid-September, profits rapidly dropped into the loss column and stayed there for much of the remainder of the year. 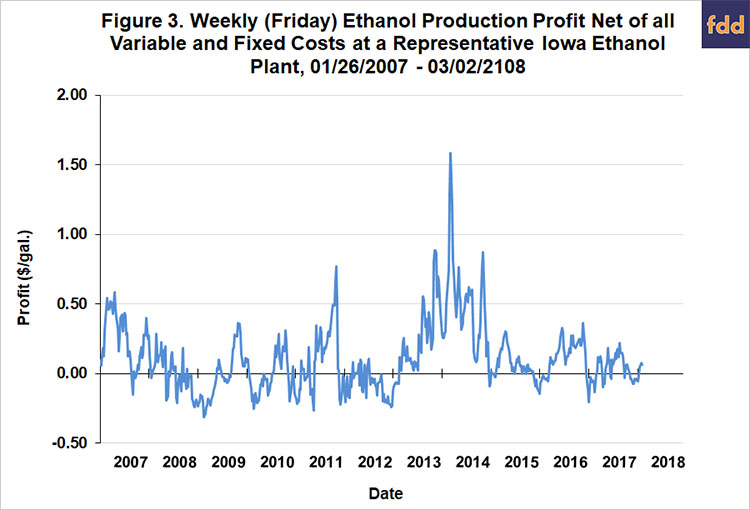 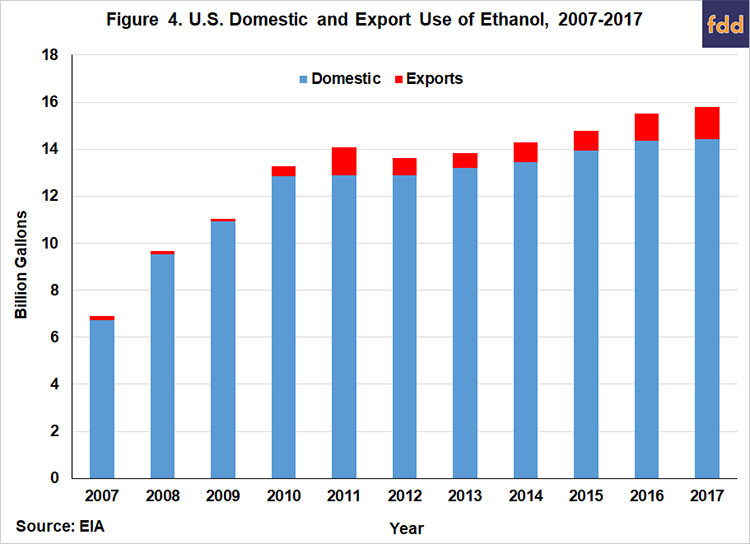 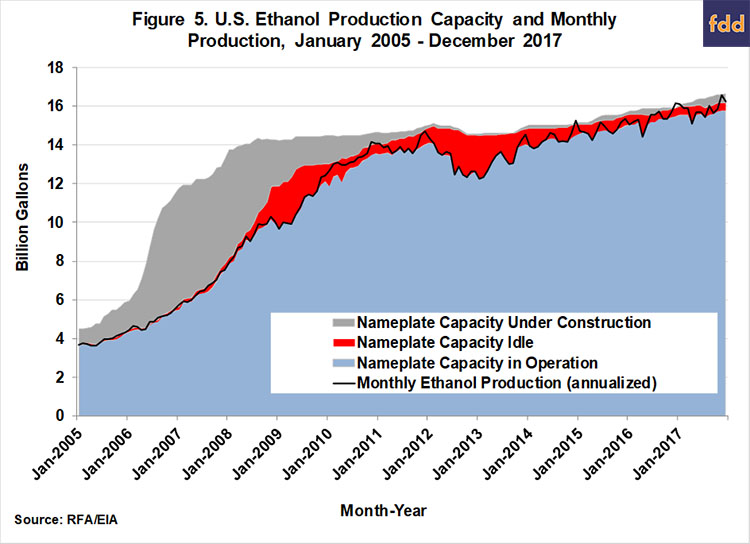 The picture that emerges from our review of Figures 4 and 5 is one of surging ethanol production simply overwhelming rising domestic and export use. This is seen directly in Figure 6, which plots monthly ethanol stocks in the U.S. over January 2007 through December 2017. The upward trend in stocks since 2014 is obvious, with peaks of almost a billion gallons at times. The rising stocks provide clear quantitative evidence that production has risen even faster than use since 2014 and this is the source of the downward pressure on ethanol prices and production profitability. It is interesting to note that the trend of rising stocks has continued into 2018, with the latest weekly report from the EIA indicating ethanol stocks of 1.02 billion gallons. 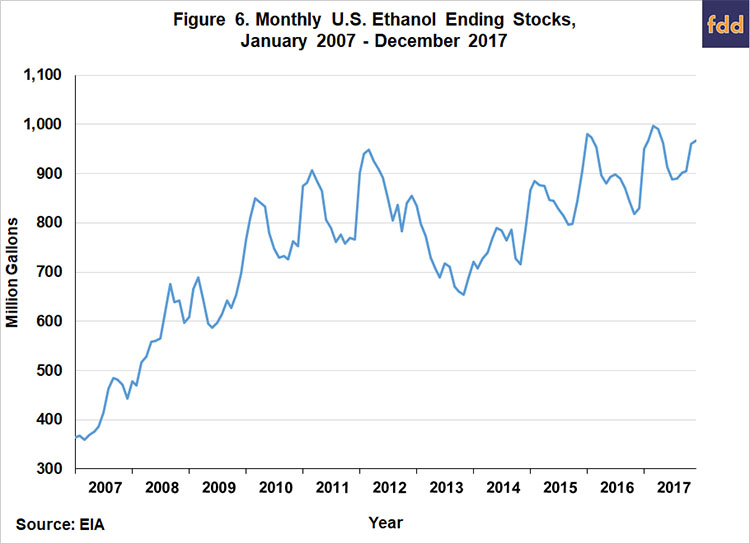 A final perspective on 2017 profitability is provided in Figure 7, where the profit margins are aggregated over an annual horizon for 2007-2016. Profits are presented in terms of both total pre-tax net returns and percent return to equity. The 2017 net profit of $2.6 million was the fourth lowest over 2007-2017 and well-below the annual average for the entire period of $11.4 million. Despite the downturn, 2017 represented the fifth consecutive year of positive ethanol production profits. The total cumulative (pre-tax) return to equity holders for the 2007-2017 period now stands at $124.1 million, slightly less than the assumed equity investment for the representative plant of $126.6 million. We can use the average net profit for the representative plant to make a rough estimate of profit for the entire U.S. ethanol industry in 2017. Assuming all plants in the industry earned a net profit of $0.03 per gallon and that total ethanol production for the U.S. was 15.8 billion gallons in 2017, aggregate ethanol industry (pre-tax) profits can be estimated at $474 million. 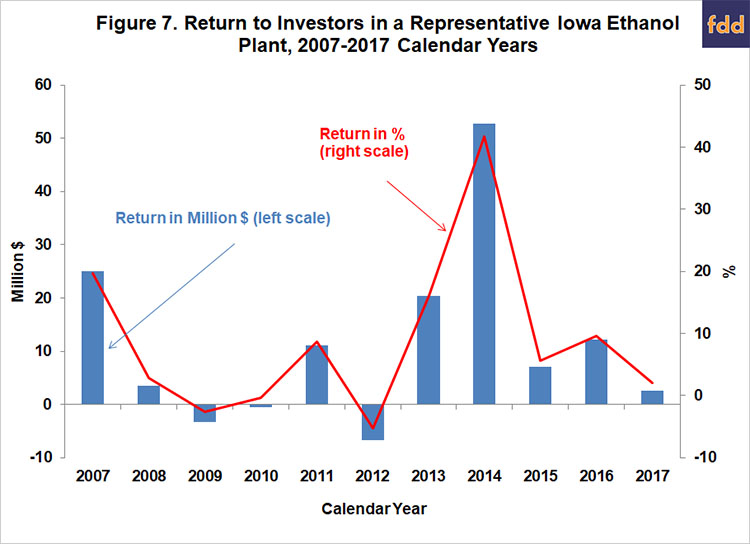 Finally, the percent return to equity holders provides useful information on the attractiveness of investment in ethanol plants relative to other investments. The average return was 8.9 percent over 2007-2017 and the standard deviation, a measure of risk, was 13.3 percent. By comparison, the average return for the stock market over this period, as measured by the S&P 500, was 9.8 percent and the associated standard deviation was 18.1 percent. The ratio of average return to standard deviation provides one measuring stick of an investment’s return-risk attractiveness, and on this measure the ratio for ethanol investment, 0.67, compares favorably with the ratio for the stock market as a whole, 0.54.

The U.S. ethanol production industry struggled in 2017. Net profits for a representative Iowa ethanol plant averaged only $0.03 per gallon, compared to $0.12 per gallon in 2016. The 2017 total net profit of $2.6 million for the representative plant was the fourth lowest over 2007-2017 and well-below the annual average over 2007-2017 of $11.4 million. The story behind the declining fortunes of the ethanol industry is straightforward. Domestic and export use for U.S. ethanol has increased nicely since 2014, but production capacity and actual production increased even faster. The surge in production basically overwhelmed the rise in use, which caused ethanol stocks to increase and ethanol prices and profits to fall. The fortunes of the U.S. ethanol industry are unlikely to improve until production and use are better balanced. Based on recent production and stocks data it looks like this could take some time.