The ethanol industry appeared to have a good year in 2016. The drop in crude oil prices continued to stimulate driving and gasoline demand (June 10, 2016), the EPA maintained a policy of pushing the conventional ethanol mandate upwards (November 30, 2016), and ethanol exports boomed. An interesting question is just how much these favorable factors increased the bottom-line of the industry. The purpose of this article is to examine this question by comparing estimates of ethanol production profitability for 2016 and to those earned over 2007-2015.

A model of a representative Iowa ethanol plant is used to track the profitability of ethanol production. It is the same basic model that has been used the last several years in numerous farmdoc daily articles on ethanol markets and policy (e.g., March 14, 2014; March 5, 2015; January 6, 2016). The model is meant to be representative of an “average” ethanol plant constructed in the last decade. There is certainly substantial variation in capacity and production efficiency across the industry and this should be kept in mind when viewing profit estimates from the model. Some of the model assumptions include:

Figure 1 presents the three components of plant revenue per gallon–ethanol, DDGS, and corn oil–on a weekly basis from January 26, 2007 through January 20, 2017. The chart shows that ethanol prices started 2016 very low at about $1.20 per gallon, rose to a peak of about $1.60 in June, dropped back and then rose sharply to an even higher peak of almost $1.80 by mid-December. DDGS prices were strong in the first half of 2016, peaking near $160 per ton, but then declined precipitously to a low of $94 in December. The late year DDGS prices were some of the lowest of the last decade. Total revenue started the year off at low levels and then peaked at $2.10 per gallon in mid-May. Figure 2 shows the four major cost components for producing ethanol. The cost of corn is the major input cost, about 70 percent of variable and fixed costs on average, and since the price of corn was relatively stable in 2015, total costs tended to fluctuate in a relatively narrow band of about $1.50 to $1.70 per gallon. Natural gas costs were quite variable in 2016, reaching historical lows of around $0.07 per gallon in February and then more than doubling to about $0.15 by December. 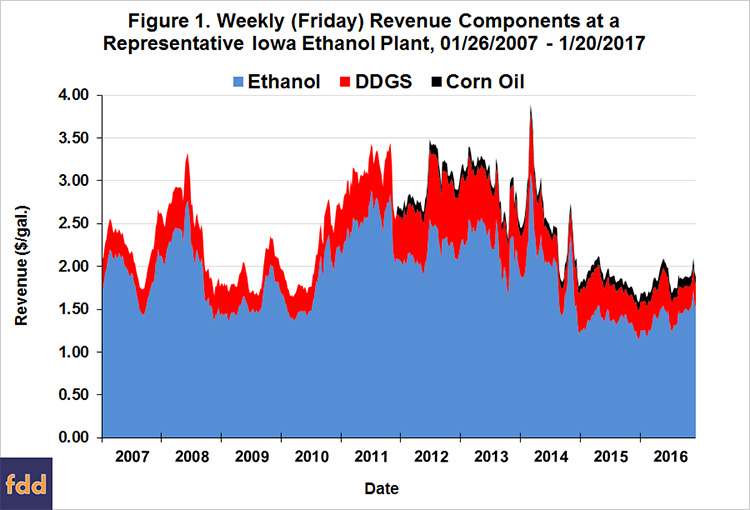 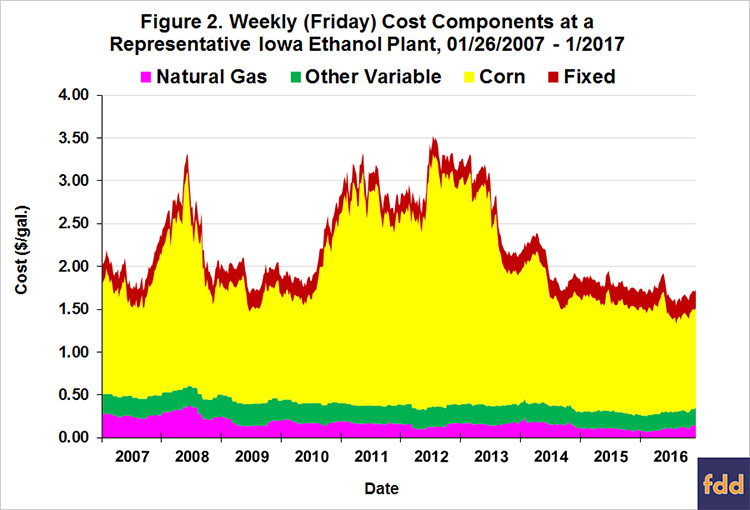 Figure 3 presents (pre-tax) estimates of ethanol production profits net of all variable and fixed costs. Net profits in 2016 averaged $0.12 per gallon, about $0.05 higher than in 2015, but much smaller than in 2014 when the combination of relatively high ethanol prices and relatively low corn prices drove profits to a record $0.54 per gallon. There was also a distinct pattern in 2015 of lower average profits in the first half of the year, $0.03, versus much higher profits in the second half, $0.19. This was almost exactly the mirror image of the pattern of profits in 2015. The most likely factor responsible for the upsurge in profits during the last half of 2016 was surging ethanol export demand (see the farmdoc daily article of June 11, 2014 for earlier evidence in this regard). 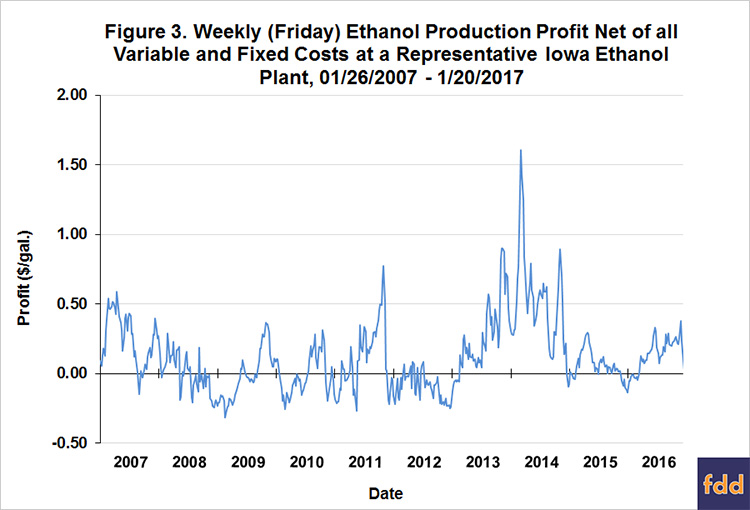 Further perspective on 2016 profitability is provided in Figure 4, where the profit margins are aggregated over an annual horizon for 2007-2016. Profits are presented in terms of both total pre-tax net returns and percent return to equity. The 2016 net profit of $13 million was the fourth largest over 2007-2016, confirming the solid performance of the industry and very near the average for the entire period of $12.4 million. Perhaps most notably, 2016 represented the fourth consecutive year of positive ethanol production profits. The total cumulative (pre-tax) return to equity holders for the 2007-2016 period now stands at $124.4 million, slightly less than the assumed equity investment for the representative plant of $126.6 million. We can use the average net profit for the representative plant to make a rough estimate of profit for the entire U.S. ethanol industry in 2016. Assuming all plants in the industry earned a net profit of $0.12 per gallon and that total ethanol production for the U.S. was 15.4 billion gallons in 2016, aggregate ethanol industry (pre-tax) profits can be estimated at $1.9 billion. Finally, the percent return to equity holders provides useful information on the attractiveness of investment in ethanol plants relative to other investments. The average return was 9.8 percent over 2007-2016 and the standard deviation, a measure of risk, was 14.5 percent. By comparison, the average return for the stock market over this period, as measured by the S&P 500, was 8.3 percent and the associated standard deviation was 19.7 percent. The ratio of average return to standard deviation provides one measuring stick of an investment’s return-risk attractiveness, and on this measure the ratio for ethanol investment, 0.68, compares favorably with the ratio for the stock market as a whole, 0.46. 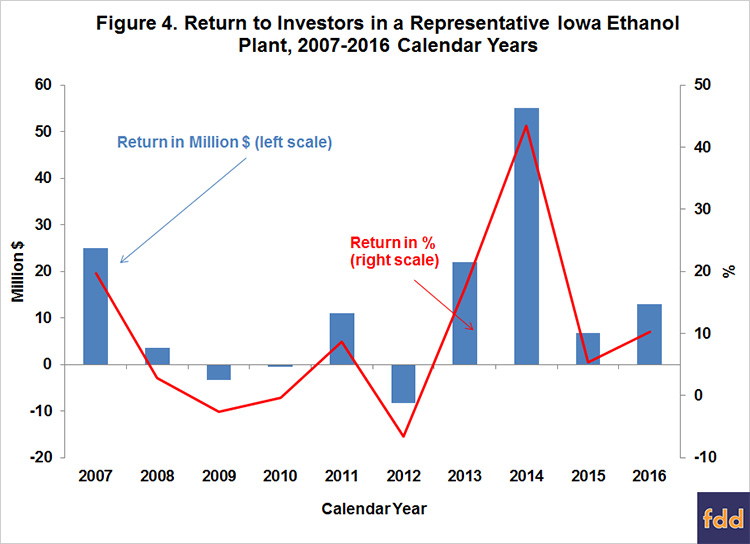 The U.S. ethanol production industry had a good year in 2016. Net profits averaged $0.12 per gallon, about $0.05 higher than in 2015. The cumulative net profit for all of 2016 was $13 million, the fourth largest over 2007-2016. The most likely factor responsible for the upswing in profits, especially during the second half of the year, was surging ethanol export demand. To add to the good news, 2016 represented the fourth consecutive year of positive ethanol production profits. However, there are some storm clouds gathering for the ethanol industry. Ethanol prices and profits have declined sharply in recent weeks and there is a great deal of uncertainty about export prospects due to the potential for changing trade policies under the new Trump Administration.

Irwin, S., and D. Good. "Why Are Ethanol Prices and Production Profits So High?" farmdoc daily (4):108, Department of Agricultural and Consumer Economics, University of Illinois at Urbana-Champaign, June 11, 2014.