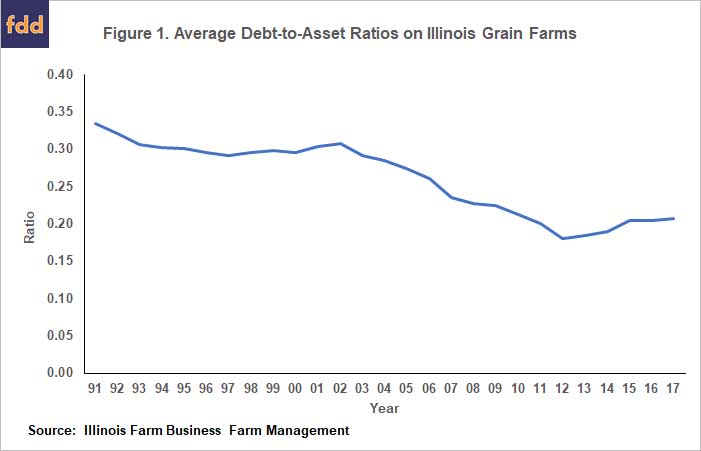 The average current ratio on Illinois grain farms increased from 1.97 in 2006 up to 2.86 in 2012 (see Figure 2). The 2006-2012 period had high commodity prices and costs had not increased enough to offset higher prices, resulting in a period of above-average incomes. This above-average income period allowed farmers to improve their financial positions and strengthen current ratios. Since 2012, commodity prices have been lower, and incomes have decreased, resulting in the current ratio decreasing from 2.86 in 2012 to 1.96 in 2017. The average 1.96 ratio in 2017 is not particularly worrisome, however, the 2017 level is the same level as in 2006, indicating improvement in the current position during the high-income years has been erased. 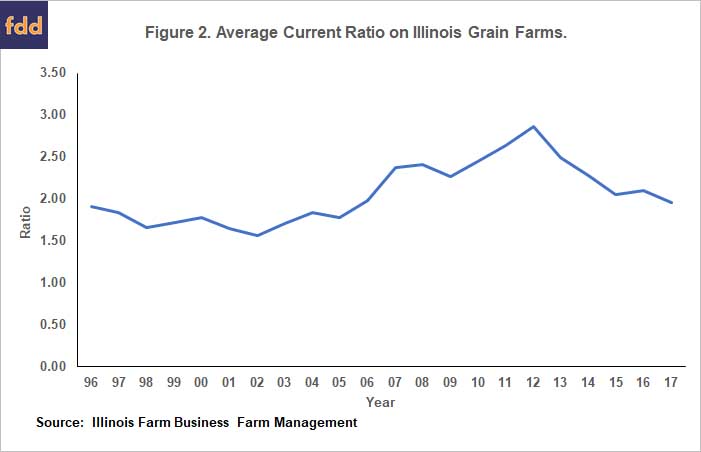 Range in Financial Positions at the End of 2017

While averages serve as good indicators for general trend, they do not depict the range of financial positions on grain farms. Table 1 gives statistics for farms falling in different debt-to-asset ratio ranges at the end of 2017. This table summarizes data from grain farms in Illinois FBFM who meet the following conditions:

Trends in tenure, cash rent percent, and age likely relate to the length of time the operation has been in farming.  Younger operators likely have accumulated less wealth, thereby resulting in less owned land and more rented farmland.  In recent years, these younger operators may have had to rely more on cash rented farmland to increase their farming base.

Statistics presented in this paper suggest a spectrum of financial positions on grain farms in Illinois.  At one end are farms that are financially strong.  These farms have the wherewithal to withstand a great deal of adversity, and also seek opportunities to invest funds in the farming operation.  In the middle are farms whose solvency position is sound but may have very tight working capital positions.  Some sort of restructuring may be needed to address working capital on these farms. Overall, the majority of farms are in strong, solvency positions.

There are some farms that have much weaker financial positions.  These farms may face financial difficulties moving forward, particularly if grain prices remain at their current levels. These farms may need to restructure assets and debts.

None of this suggests the existence of a current financial crisis.  In fact, many farms may improve financial position in 2018 as a result of high yields, some pre-harvest hedging, and Market Facilitation Program (MFP) payments (see farmdoc dailly, October 11, 2018).  However, the situation will bear close scrutiny however moving into 2019, as projections currently indicate the expectation for grain farm income to be negative (see farmdoc dailly, September 18, 2018).  A year of losses would weaken the financial position of grain farms in the Midwest.

Krapf, B., D. Raab and B. Zwilling. "Agricultural Debt Continues to Increase." farmdoc daily (8):154, Department of Agricultural and Consumer Economics, University of Illinois at Urbana-Champaign, August 17, 2018.