The warning sirens have sounded once again; the full faith and credit of the United States government is at risk of a default unless Congress raises the debt limit (Cochrane and Tankersley, July 12, 2019).  This is merely the latest edition in a long-running saga of self-inflicted trouble wrapped in the guise of budget discipline and reform policy.  It provides the subject for another budget discussion.

According to the Department of the Treasury, Congress has raised the debt limit 78 times since 1960 (U.S. Dept. of the Treasury, Debt Limit).  As discussed previously, the federal debt is amassed each fiscal year that the federal government spends more than it collects in revenues, known as the deficit (farmdoc daily, November 29, 2018).  Federal revenues come from individual income taxes, payroll taxes (largely funding trust funds for Social Security, Medicaid and Medicare), corporate income taxes and other revenues (e.g., excise taxes, estate and gift taxes, customs duties and miscellaneous receipts); in other words, revenues are taxes collected by the federal government (farmdoc daily, April 18, 2019).  Federal spending takes place via discretionary (annual appropriations, including basic salaries and expenses of the federal government as well as defense and nondefense programs) and through mandatory spending (entitlement programs).  Figure 1 illustrates the federal debt held by the public as a percentage of gross domestic product (GDP) as reported by the Congressional Budget Office (CBO), including projections made by CBO through 2049 (CBO 2019, Historic Budget Data; Long-term Budget Projections). 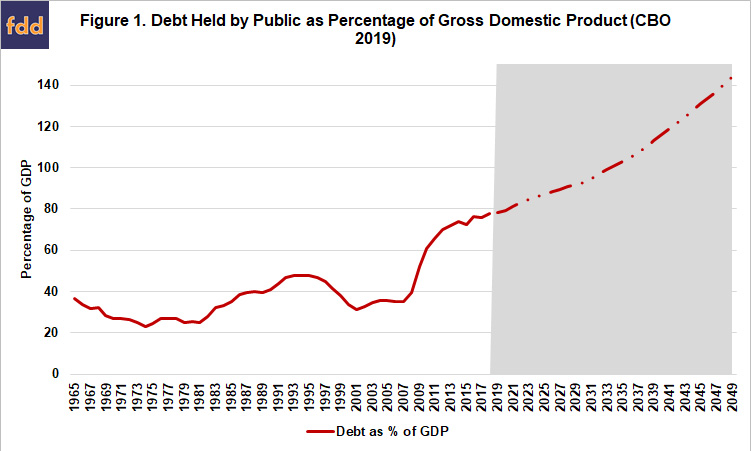 Importantly, the debt limit does not impact the deficit; it does not discipline or in any way control spending or revenues.  The debt limit only applies to the federal debt (accumulated deficits) which is broken into two categories.  One is debt held by the government’s own accounts, such as the Social Security and Medicare trust funds, which is determined by the net of income or funds into these accounts (e.g., Social Security trust fund).  Notably, this debt grows when Social Security payroll taxes exceed payments to program beneficiaries (Austin, CRS 2015).  The second is the debt that is held outside of the government accounts and issued to the public, known as the federal debt held by the public.  Each annual federal budget deficit results in the government having to issue more debt to the public, or outside its own accounts, thus increasing the federal debt held by the public.  Figure 2 illustrates both components of the federal debt as reported by the Federal Reserve Bank of St. Louis, Federal Reserve Economic Data (FRED, Federal Government Debt).  The data are reported quarterly beginning in 1981 through first quarter of 2019; they are not seasonally adjusted. 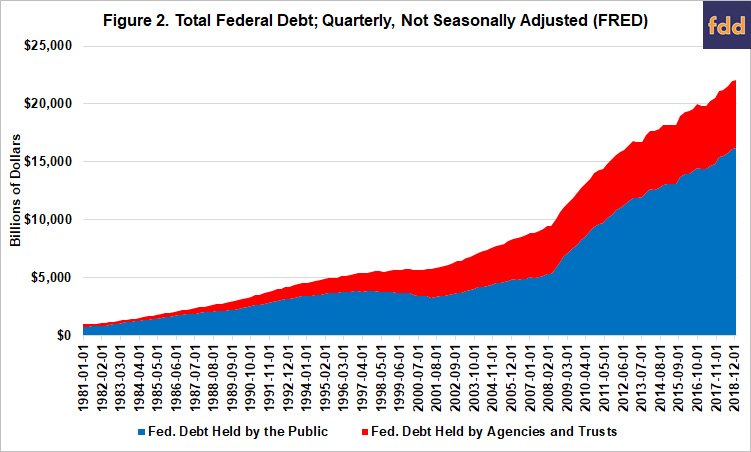 The debt limit is rooted in some of the most fundamental powers of Congress to collect taxes, pay the debts and borrow money (U.S. Constitution); in other words, the debt limit is part of the power of the purse (Stith 1988).  Since the founding, Congress has always placed some sort of restriction on borrowing and the federal debt, generally in the form of specific borrowing authority or bonds for war revenues, such as Liberty Bonds for World War I (Austin 2015).  Revisions to this system started to come into place in the 1930s when Congress began using aggregate constraints on federal borrowing with the goal of providing greater flexibility to the Treasury Department.

World War II required Congress to raise the debt limit to $300 billion; the highest level at which it was set, federal borrowing did not reach the limit until 1962 (Austin 2015).  Congress wrote the debt limit into law in 1982 as part of a revision and codification of a set of laws related to money and finance matters (P.L. 97-258).  Section 3101 provided for the limit on public debt which was set at $400 billion.  With the exception of a brief run of federal surpluses in the late 1990s that led to a reduction in the debt held by the public, federal debt has grown each year since 1982.  It has grown substantially each year since 2001 under increasing annual deficits (Austin 2015).  This is evident from both Figures 1 and 2.

This first signs of trouble with the debt limit appeared in 2002, when Treasury had to use specific authorized measures to avoid exceeding the debt limit; at one point coming within $15 million of the limit—or, according to a calculation of the average spending rate, about five minutes worth of spending—until Congress agreed to increase the limit by $450 billion (Austin 2015).  This was followed by a series of close calls and last minute increases by Congress in 2003 and 2004, but Congress increased the limit with little problem in 2005, 2006 and 2007.  The onset of the Great Recession beginning in late 2007 but fully coming to bear in 2008 caused substantial increases in spending and deficits, with Congress raising the debt limit twice in each of 2008 and 2009.  The debt limit was increased to above a symbolic $10 trillion for the first time in 2008 with enactment of the Housing and Economic Recovery act of 2008 pushing the limit to $10.615 trillion (P.L. 110-289; Austin 2015).  The debt limit was pushed above $20 trillion in 2017.  Figure 3 charts the federal debt limit using data compiled by the Congressional Research Service for each statutory increase, aligned quarterly from second quarter 1993 to first quarter 2019 (Austin 2019). 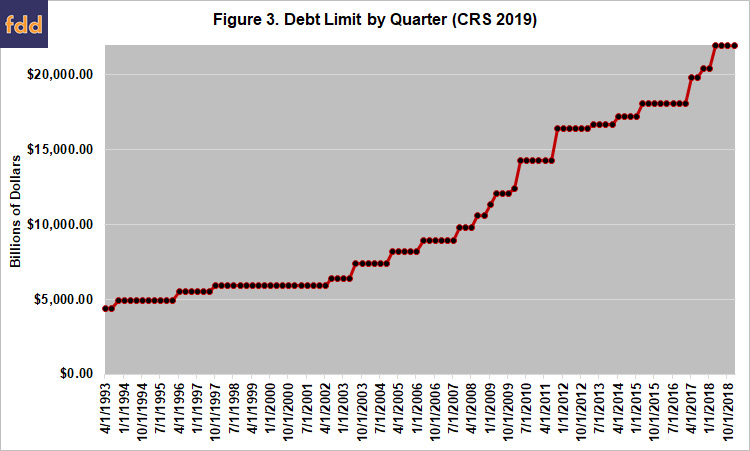 In the history of the debt limit, 2011 stands out as a particularly notable and consequential chapter.  Notified that the limit had been reached in May and that Treasury would be able to use extraordinary measures to avoid exceeding it through August 2nd, Congress struggled to increase the debt limit.  The House sought to tie a constitutional amendment requiring a balanced budget to the debt limit increase but the Senate rejected it; negotiations continued among President Obama, the Democratic-controlled Senate and the Republican-controlled House resulting in the Budget Control Act of 2011 (Austin 2019).  Among other things, the Budget Control Act of 2011 raised the debt limit to $16.394 trillion but coupled that with efforts to reduce federal spending; first through the Super Committee effort to reduce spending, which failed, and subsequently through automatic, across-the-board spending cuts called sequestration.  The larger political implications of the 2011 debt limit crisis are a topic for further exploration.  They likely contribute to Congressional dysfunction and political polarization (Farina 2015; Lee 2013).  One particular result of the 2011 crisis episode was the push to reduce spending in the farm bill, leading to the long and difficult process for reauthorizing programs in the 2014 Farm Bill (Coppess 2018). 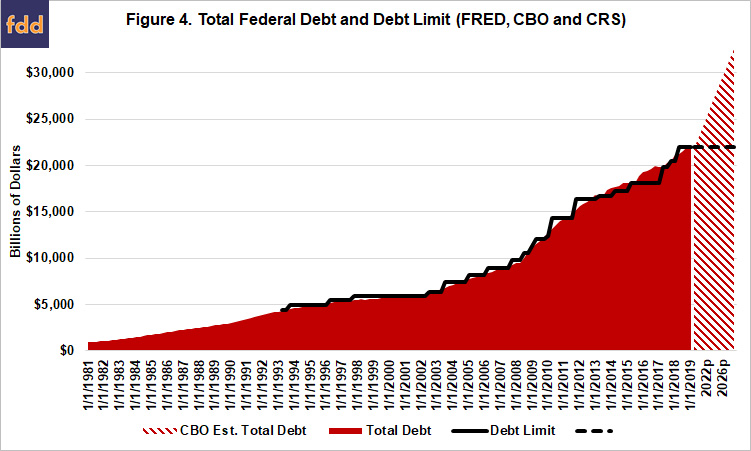 If a definition of insanity is doing the same thing over and over again but expecting different results, the debt limit may well represent insanity masquerading as policy (Pruitt, April 7, 2017).  With the next chapter in this debt limit saga upon us, the discussion herein provides a brief perspective that adds to the overall budget discussion.  The troubles surrounding and implicating the debt limit are almost all self-inflicted, whether because of policy decisions that lead to deficits or because of politicization of the need to increase the debt limit.  This raises important questions about whether the debt limit should continue as federal policy, be eliminated or revised in some fashion.  Among possible revisions could be those that are focused on the Congressional process, seeking to reduce the political theatre and avoid hostage taking with the debt limit.  For example, Congress could establish mechanisms for automatic increases of the debt limit subject to Congressional disapproval.  All arguments in favor of the debt limit, however, should certainly address the 2011 episode, as well as continued Congressional dysfunction and partisan polarization.  The consequences of triggering a default could be catastrophic.