This is the sixth in a series of articles celebrating the 20th anniversary of farmdoc. A list of all nine articles in the series and authors can be found at the end of this article.

When the farmdoc project started in 1999 biofuels markets and policy were barely on the radar screen.  However, production and use of biofuels in the U.S. grew very rapidly starting around 2005 due to a combination of factors.  Two factors stand out: i) the large increase in real crude oil prices through 2008, and ii) implementation of the Renewable Fuel Standard (RFS), first in 2005 and then amended in 2007.  The increase in crude oil prices is crucial as it made biofuels more competitive in the marketplace and led to a political reaction that spurred the passage of the RFS legislation through the U.S. Congress.  The RFS mandates have been highly controversial, particularly in the petroleum refining sector, and subject to almost continuous legal challenge.  Regardless, biofuels rose to become an important driver of prices in grain and oilseed markets.  If one wanted to understand price dynamics in grain and oilseed markets since 2005, you had to understand what was going on in biofuel markets.  The farmdoc team has played a leading role in understanding the complex interplay between biofuels policy and markets and the implications for grain and oilseed markets.  The purpose of this article is to review key developments in biofuels markets and policy since 2005 and highlight the important contributions made by the farmdoc team to better understanding the implications for agricultural markets.

We start with a review of the RFS, since this policy is central to understanding the evolution of biofuels production and use.  The RFS was established by the Energy Policy Act of 2005 and was substantially expanded as part of the Energy Independence and Security Act (EISA) of 2007.  The 2005 statute is generally referred to as “RFS1” and the 2007 statute as “RFS2.”  Since its inception, the program has been administered by the U.S. Environmental Protection Agency (EPA).  The RFS2 statute required the EPA to establish volume requirements for four categories of biofuels for each year from 2008 through 2022: cellulosic biofuel, biomass-based diesel, total advanced biofuel (which includes biomass-based diesel), and renewable fuel (referred to as conventional ethanol here).  The difference between the total advanced mandate and the total of the cellulosic and biodiesel mandate is referred to as the undifferentiated advanced mandate and can be satisfied by a combination of qualified advanced biofuels.   Conventional biofuels are generally assumed to be corn-based ethanol but this is actually not explicitly required by the RFS legislation.  Instead, corn-based ethanol generally has been the cheapest alternative for this category that also meets the environmental requirements of the RFS.  The conventional biofuels mandate is referred to as the conventional ethanol mandate for the remainder of this article in order to be consistent with the most common term for this particular RFS mandate. 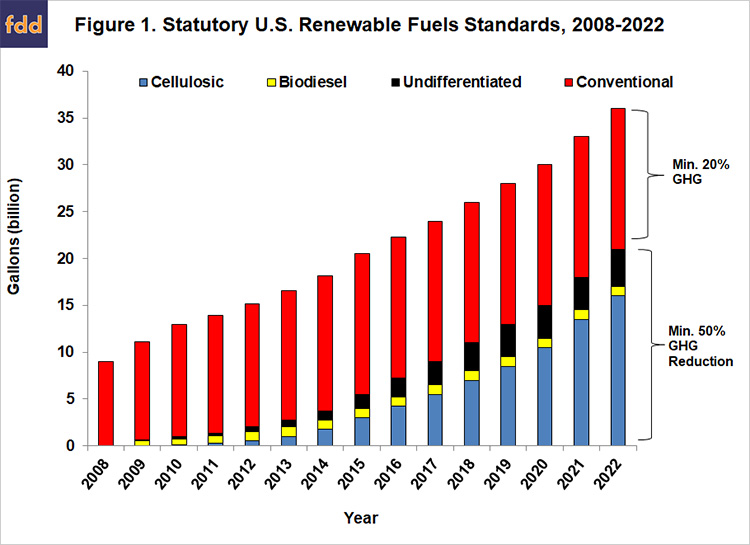 The mandated targets for cellulosic biofuels were very aggressive from the outset given that industrial-scale production was virtually non-existent at the time RFS2 was passed in 2007.  While several plants have been built in the last decade, cellulosic ethanol production has struggled to reach a few million gallons.  The vast bulk of what has been produced in this category is actually captured landfill gas in liquid form, which qualifies as a cellulosic biofuel due to the breakdown of paper lignin in landfills.  The low production totals from all sources has caused the EPA to use its RFS waiver authority to write down the cellulosic mandate to very low levels relative to statutory levels each year to date.  The total advanced biofuel mandate has also been written down in conjunction with the write down in the cellulosic mandate.

The E10 blend wall is the main reason that the RFS became so contentious.  This issue arose because regulation in the U.S. has traditionally limited the ethanol content of gasoline blends to a maximum of 10 percent by volume.  Consequently, the theoretical maximum amount of ethanol that can be consumed is 10 percent of total gasoline consumption.  At the time the RFS was passed in 2007, it was commonly projected that U.S. gasoline consumption by 2015 would be 150 billion gallons.  So, it is no surprise that the cap on the conventional ethanol mandate in 2015 was set to 15 billion gallons, exactly 10 percent of projected gasoline consumption.  The problem is that actual gasoline consumption began falling almost as soon as the RFS was passed due to the combined effects of high real crude oil prices and the onset of the Great Recession.  This meant that by 2013 the conventional ethanol mandate as specified in the RFS statute began to surpass the E10 blend wall.

Understanding what happens when the conventional ethanol mandate exceeds the E10 blend wall requires some understanding about how compliance under the RFS works.  Obligated parties under the RFS are refiners and importers of gasoline and diesel.  On annual basis, the Environmental Protection Agency (EPA) issues rulemakings about the volume of biofuels that each party must demonstrate is blended into final surface transportation fuel for that calendar year.  Compliance is demonstrated by turning in to the EPA tradeable credits known as the Renewable Identification Numbers, or RINs for short.  A RIN is created when a biofuel is produced and travels with the fuel as it moves through the supply chain.   Obligated parties can obtain RINs by blending biofuels themselves or buying the credits from non-obligated parties.

As shown in Figure 2, the price of D6 ethanol RINs exploded in early 2013 as the conventional ethanol mandate exceeded the E10 blend wall for the first time.  In a matter of months, the price of ethanol RINs went from a few cents to nearly $1.50 per gallon.  While there have been many charges of manipulation to explain the price explosion, and subsequent RIN price volatility, there is actually a simple explanation.  The RFS contains a “nesting” feature whereby advanced biofuel RINs, principally biodiesel, can be used to not only meet the biodiesel and advanced mandates but also the conventional ethanol mandate if need be.  So, when the ethanol mandate began to exceed the blend wall the gap between the two had to be filled by something besides corn-based ethanol, and that something was biodiesel.  In essence, biodiesel became the marginal gallon for filling the conventional ethanol mandate and ethanol RINs began closely tracking the much, much more expensive price of D4 biodiesel RINs. 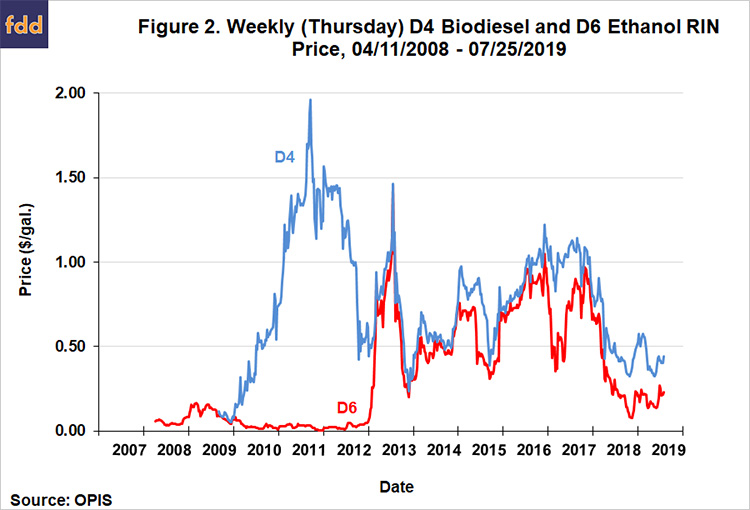 Starting in 2013, the equivalent of political trench warfare broke out between petroleum refiners and biofuel producers.  On one side, refiners and their political allies argued that the “RFS was broken” and that the dramatic increase in RINs prices was substantially harming their operating profits.  On the other side, biofuels and agricultural groups argued that the RFS was intended by Congress to be a technology forcing program and that the high RIN price reflected the unwillingness of the petroleum refining industry to make the investments that would lower the cost of breaching the blend wall via higher ethanol blends such as E15 and E85.

Much like the trench warfare of World War I, the years since 2013 have seen an ebbing and flowing of which side had the upper hand in the political battle over the RFS.  For example, the Obama Administration EPA cut the conventional ethanol mandate in 2014-2016 a total of 2.24 billion gallons under pressure from refiners.  The EPA’s authority to make these cuts was immediately challenged by biofuel and agricultural groups, and in July 2017 a U.S. Federal Appeals Court ruled against the EPA.  More recently, the Trump Administration EPA granted an unprecedented number of small refinery waivers (SREs) for the 2016-2018 compliance years.  The SREs were granted retroactively, which effectively cut the RFS mandates by a total of 4.05 billion gallons.  A firestorm of protest erupted from biofuel and agricultural groups, which continues to the present.  Numerous efforts have been made in recent years to reconcile the interests of the two sides in implementing the RFS to no avail.

The farmdoc team had a unique opportunity to help write the “first draft” on the economics of biofuel markets and policy because everything was so new.  Some highlights in this regard include:

Understanding biofuels markets and policy has been an essential part of analyzing agricultural markets for much of the last 20 years. This has opened up study of topics unimagined two decades ago, such as RIN pricing and the supply of biodiesel.  The farmdoc team has played an important role in helping understand the complex interplay between biofuels policy and markets and the implications for grain and oilseed markets.  We look forward to continuing this tradition in the future.

Irwin, S. “farmdoc at 20: How Did We Get Here and What Have We Learned?” farmdoc daily (9):163, Department of Agricultural and Consumer Economics, University of Illinois at Urbana-Champaign, September 3, 2019.

Endres, A., D. Uchtmann and G. Hoff. “Law and Taxation: A Retrospective of 20 Years.” farmdoc daily (9):170, Department of Agricultural and Consumer Economics, University of Illinois at Urbana-Champaign, September 12, 2019.