At first glance, the demise of the Soil Bank appears to have caused a break in the development of conservation policy for more than two decades; a seeming interregnum.  Upon a closer look at the acres planted to the major row crops, an altered picture emerges.  The Soil Bank initiated a different direction in farm policy under which conservation became the policy mechanism to bring about adjustments in farming.  This article continues the series on conservation policy development by reviewing acres and policy developments during those years.

The Soil Bank became President Eisenhower’s attempt to resolve the political, economic and related problems developing in the post-World War II era; decades of technological advancements in farm production boosted yields and unraveled the New Deal parity system.  The Soil Bank sought to put acres into an annual acreage reserve as an attempt to reduce the growing surpluses in federal storage, with farmers receiving payments for reductions in cash or in-kind.  It also created a conservation reserve that retired less-productive and marginal acreage under longer-term contracts.  Congress did not renew either program.  It was politics, largely, that killed the Soil Bank (farmdoc daily, February 20, 2020).

The demise of the Soil Bank may be exaggerated, however.  Figure 1 provides a long-term perspective on acres for background to the discussion, covering the years 1926 to 1985.  It compares the total cropland used for crops as reported by USDA’s Economic Research Service with the total acres planted to the major row crops as reported by NASS Quick Stats.  Included in this total are the acres planted to corn, wheat, cotton, soybeans, peanuts, rice and the other feed grains (barley, oats, rye and sorghum).  Figure 1 uses the 1926 to 1946 averages for total cropland and for total planted acres as a sort of baseline for comparison.  Finally, the acres enrolled in the Soil Bank (both acreage reserve and conservation reserve) are added to the bars for acres planted.  The Soil Bank’s impact on acres appears relatively clear, filling the space between acres planted and the 1926-1946 baseline. 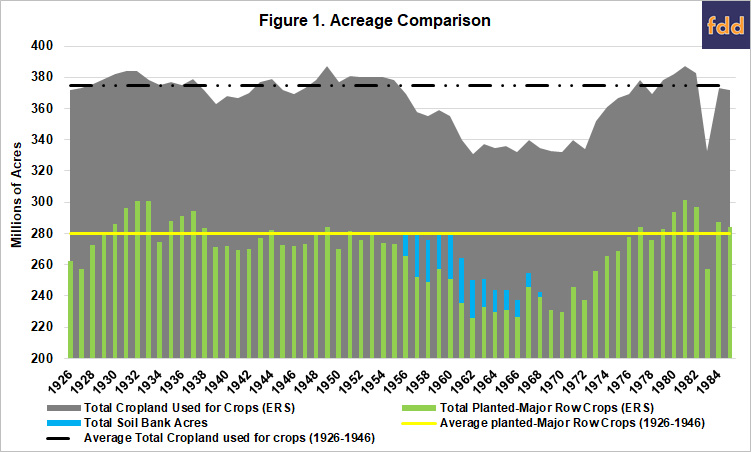 If politics brought down the Soil Bank the result was not a resolution of the surplus problem.   In February 1961, the new President, John F. Kennedy, notified Congress of the need for emergency legislation because the Commodity Credit Corporation (CCC) was holding 2.7 billion bushels of feed grains at a value of $4 billion in 1961, or the equivalent of nearly $35 billion adjusted for inflation to 2020 dollars.  Figure 2 illustrates the feed grain situation by charting the production and utilization (including exports) of all feed grains (lines) and the end-of-year carryover of all feed grains during the key years of this time period (converted to bushels from Cochrane and Ryan, 1976, Table 6.1, at 178).  During the Soil Bank operational years, feed grain production exceeded utilization, building up carryover and adding to surplus stocks, much of which was forfeited to the CCC under price support programs. 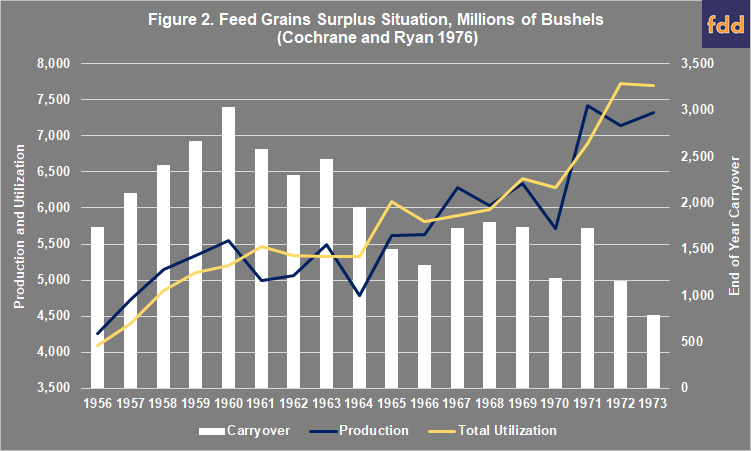 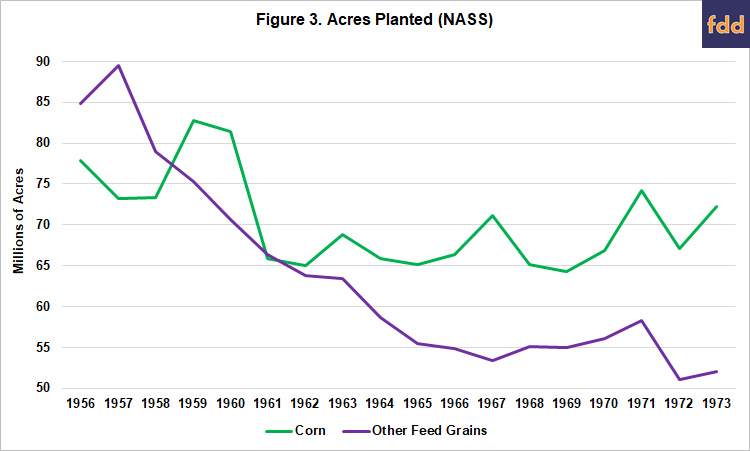 Acres diverted from cotton and wheat under the parity system allotments to the other feed grains was one of the prime catalysts for the Soil Bank; other feed grain acres exceeded acres planted to corn during the years the acreage reserve of the Soil Bank was in operation (1956-1958).  In 1958, corn farmers were provided the option to vote themselves out of the parity system and allotments, which they did beginning with the1959 crop year.  The acres planted to corn quickly rebounded, as feed grain surpluses continued to build.

Before continuing, Figure 4 illustrates the acres planted to wheat, soybeans and cotton, rice and peanuts (combined).  For the purposes of this discussion, Figure 4 makes clear that planted acreage was not shifting back to wheat and cotton.  Acres planted to soybeans continued their steady increase, however. 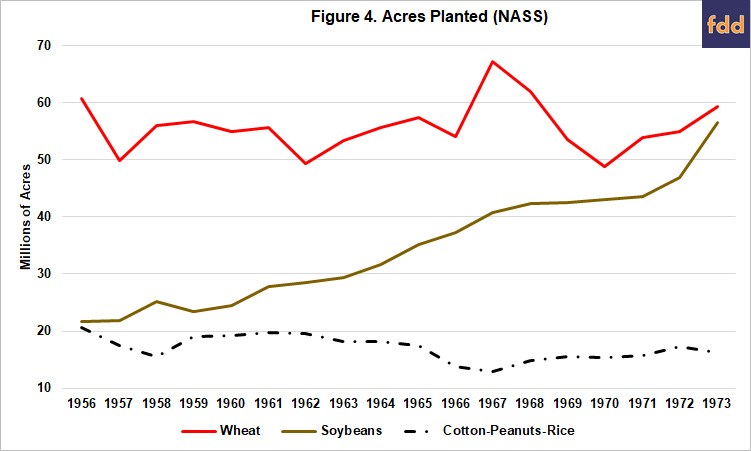 Return to 1961; President Kennedy requested that Congress quickly address the feed grain surplus before planting season began.  Congress quickly sent to the President’s desk emergency feed grains legislation for the 1961 feed grain crop year.  The bill fixed a support price for the 1961 corn crop and conditioned eligibility on participation in “the special agricultural conservation program for 1961 for corn and grain sorghums” (P.L. 87-5).  This special program required diversion of acres from corn or grain sorghum to conservation cover (or soil-conserving crops) but also provided for additional diversion in return for payments either in cash or in-kind; payments-in-kind (PIK) were made through the issuance of negotiable certificates for commodity stocks redeemable by the CCC.  This policy generally carried through to the 1970 farm bill.  Figure 5 illustrates by adding acres diverted after 1961 to the acres planted to corn and the other feed grains, as well as the average planted to all feed grains from 1956 to 1960 during the Soil Bank years.  The acres in the conservation reserve of the Soil Bank are also included. 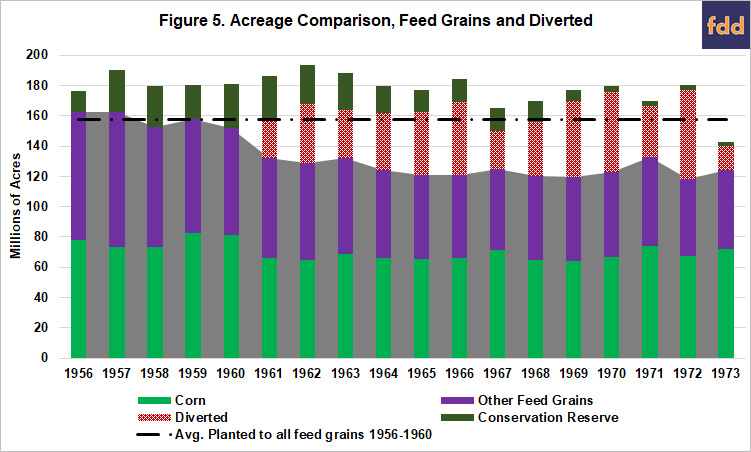 Figure 5 provides a key piece to the policy puzzle.  The acreage reserve of the Soil Bank was effectively replaced by the acreage diversion policy beginning with the 1961 emergency feed grains bill.  Its biggest impact appears to be on the acres planted to the other feed grains, although corn acres were reduced from the eight million acre range down to between 65 million and 72 million acres.  Acreage shifts were also underway, especially the significant acreage planted to soybeans and likely included acres shifting among the crops.  More important, rather than demise, it appears that the Soil Bank brought about a change in policy.  Figure 6 places this era into a long-term perspective on the acreage issue and helps clarify what otherwise looks like a break in conservation policy. 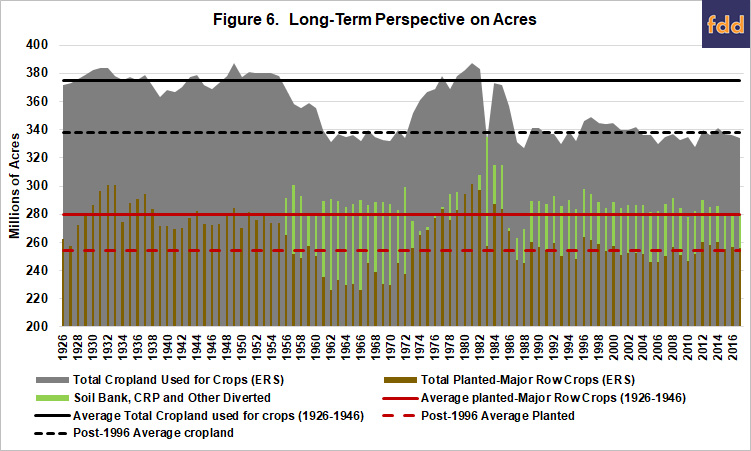 Prior to the Soil Bank—and with the exception of the Seventies and first half of the Eighties—acres planted to the major row crops and the acreage in cropland held at relatively elevated levels.  Coupled with increasing production and yields, the elevated acreages post-war exacerbated the surplus problem but policy responses were complicated and controversial.

The key conclusion from Figure 6 is that the Soil Bank represented a significant shift in farm policy.  It initiated the use of large-scale conservation as a forcing mechanism to reduce farmed acres and bring about adjustment.  Acres planted and in cropland in the years following both world wars (1926 to 1946) were at levels too high for demand given the increases in yields; a situation made more apparent by average acres after decoupling in 1996 as indicated by comparing the solid (1926-1946) and dashed lines (1996-2017).  The parity system allotment policy as a forcing mechanism was unsuccessful in large part because acres were diverted to competing crops.  Beginning with the Soil Bank, acreage adjustment was achieved by diversion into conserving uses.  Arguably, the Soil Bank initiated a hybrid policy that sought to achieve both farm economic and natural resource policy goals.