In the first quarter of 2018, the Trump Administration implemented tariffs on a variety of imports and trading partners impacted by the tariffs, especially China, retaliated with tariffs on American exports.  The ensuing conflict was particularly acute for American soybean exports to China (farmdoc daily, November 21, 2019).  The economic impact on farmers and domestic political concerns resulted in USDA creating the Market Facilitation Program (MFP).  To create the program, USDA used long-standing general authority under the Commodity Credit Corporation Charter Act of 1948; a new version of MFP was created for 2019.  All told, USDA has reported $23.1 billion in direct payments to farmers under the two versions of MFP but the $14.5 billion in 2019 payments have gained the most notice, in large part due to the very obvious regional disparities in payments (farmdoc daily, December 12, 2019; December 19, 2019).

The GAO report confirms previous reviews of the 2019 MFP payments.  To date, all reviews of the program have concluded that the highest payment rates of $150 per acre were almost exclusively in the South (GAO-20-700R, at Figure 1; Janzen and Hendricks, May 3, 2020).  Inequitable farm payments favoring crops only grown in the South is nothing new (CRS Report R4491 at 18-24).  The 2019 MFP program and GAO’s report does provide some important perspectives on how it happens, however.

Too often, reports on federal farm payments fail to look beyond the top line numbers; total payments by state more often obscures than informs.  For example, four states received more than $1 billion in 2019 MFP payments and Iowa led the way with nearly $1.5 billion followed by Illinois ($1.4 billion).  Importantly, 2019 MFP payments were made on acres planted in the county to a list of non-specialty crops, as well as a $15 per acre payment on those acres that were prevent plant and planted to cover crops.  Reviewing payments relative to acres planted provides a much better perspective than state totals; based on planted acres, it is logical that higher acreage states will receive higher total payments.  Only three states planted more than 20 million acres of the non-specialty crops in 2019.  Iowa again led the way with nearly 22.5 million acres of non-specialty crops planted, followed by North Dakota (21 million) and Illinois (20 million).  Another six states planted more than 10 million acres, Kansas (19.9 million), Nebraska (16.9 million), Minnesota (16.7 million), Texas (13.7 million), South Dakota (11 million) and Indiana (10.4 million).  Of these states, only Texas has counties receiving the maximum $150 per acre payments.  Georgia, for example, had the highest total payments per acres planted at $119.24; nearly $293 million in payments on less than 2.5 million acres planted. 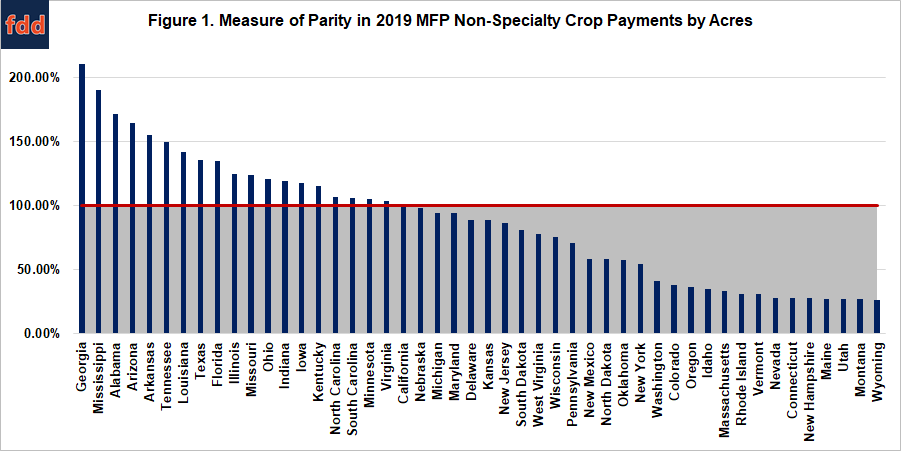 (2) The Driver of Differences in Payments 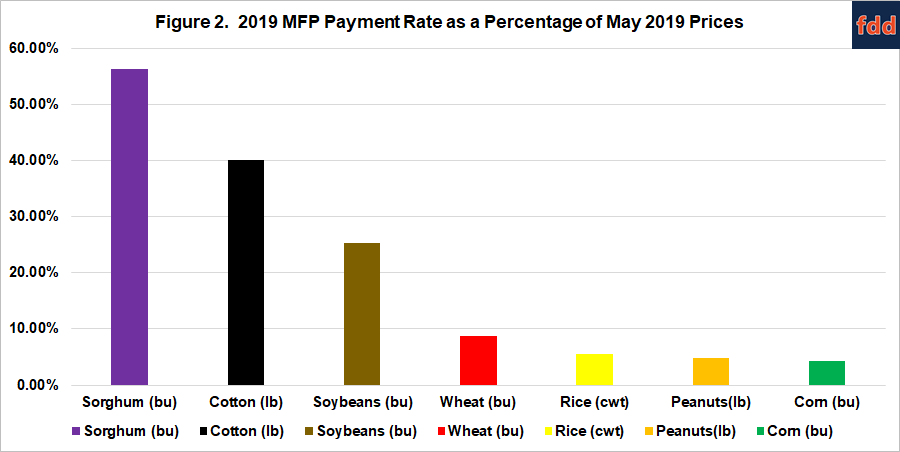 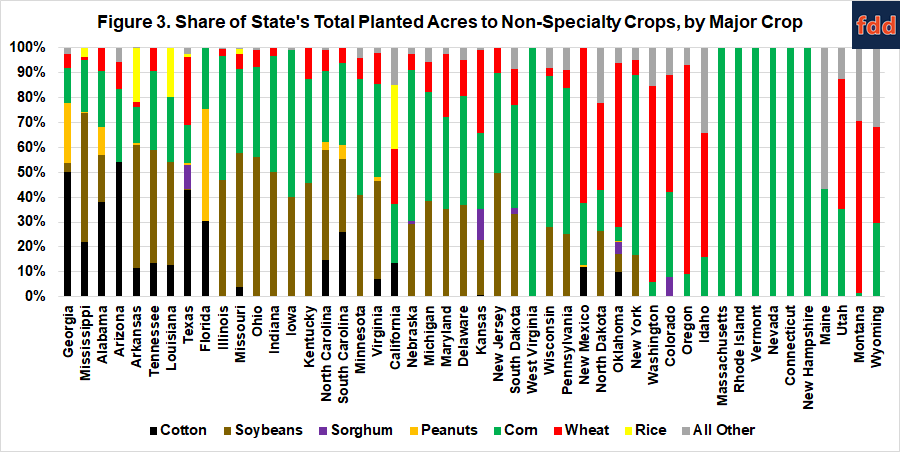 Comparing Figure 3 with Figure 1 helps further explain the disparity in payments.  Acres planted to cotton aligns closely with the states at the upper end of the parity measure in Figure 1.  Georgia was also helped by having significant acreage in peanuts, while Mississippi benefitted from a large share of acres in soybeans.  Neither state had many acres in either corn or wheat, which were on the low end of the payment rates used.

(3) Continuing Questions About the Payment Rates

The GAO report does not answer the question about how the payment rates were determined and this remains the single biggest missing element to understanding the 2019 MFP.  In its August 2019 Trade Methodology Report, USDA explained that the commodity rates were derived from estimates of gross trade damage (USDA August 22, 2019).  Announced on May 23, 2019, the 2019 MFP program obviously could not have used actual estimates for trade damage in 2019.  Reporting at the time indicated that USDA used the highest export level in the years 2009 to 2018 to determine damage (Janzen and Hendricks, May 3, 2020).  This is an odd, if not questionable, method for determining trade damage in 2018 or 2019.

Figure 4 compares the 2018 total export value for the major commodities as a percentage of the maximum export value in the years 2009 to 2018, as reported by USDA’s Foreign Agricultural Service (Global Agricultural Trade System).  To be clear, this is not likely the exact methodology used by USDA.  Janzen and Hendricks looked deeper at the exports from countries that imposed retaliatory tariffs as the measure of damage and, in particular, China (Janzen and Hendricks, May 3, 2020). 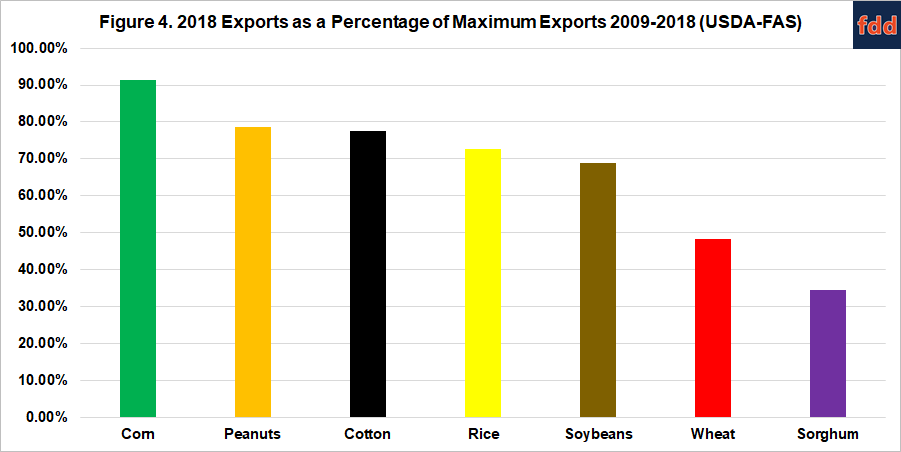 Figure 4 raises more questions for USDA’s methodology than it answers, unfortunately.  USDA’s trade damage estimates provided a rate for cotton that was 40% of its May prices but cotton’s 2018 exports were 77.5% of the maximum exports in the ten-year period (2009-2018).  Corn’s payment rate was about 4% of its May 2019 price, with its 2018 exports at 91% of its maximum exports in 2009-2018.  This methodology also failed to account for cross-commodity price impacts, raising further questions (farmdoc daily, September 25, 2019).  USDA would need to provide further clarity about its methodology to clear up the confusion around payment rates.

Questions and lack of clarity about the methodology does not obscure the fact that cotton farmers received more favorable treatment than the other commodities included in the 2019 MFP and that resulted in higher payment rates in Southern counties and for southern farmers.  State aggregated total payments also present an incomplete picture of the program, however, because a state does not receive the payments, farmers do.  It is in this that favoritism and disparity translate into real impacts on the ground, of which the GAO report also provides evidence. 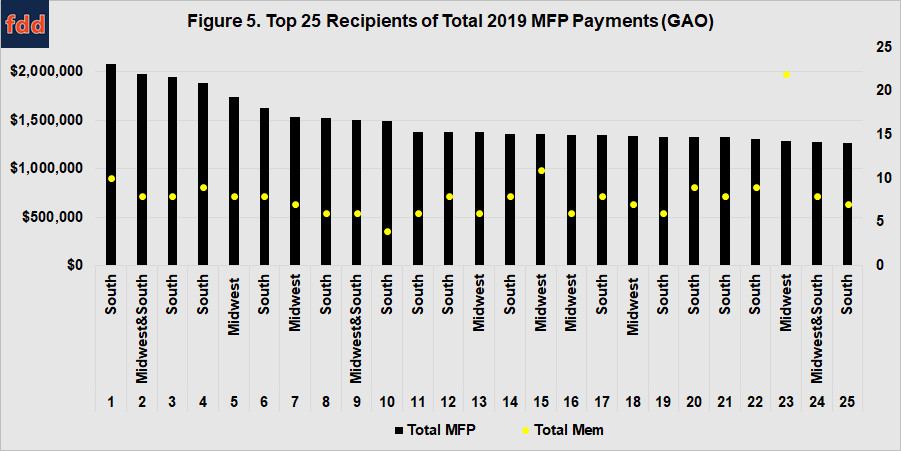 Like all farm program payments, USDA required that 2019 MFP payments be directly attributed to an individual.  USDA announced that no person or legal entity may receive more than $250,000 per person or entity, which was higher than the $125,000 payment limit for current farm bill programs (e.g., ARC and PLC).  Figure 5 also provides an information for how some farms use the entity structure to avoid the limits.

In general, the method for maximizing a farm’s payments is to either add family members to the operation or use an entity structure (corporation, LLC, general partnership or joint venture) and increase the number of members in the entity.  This can allow a farm to collect millions in total payments without running afoul of the payment limit.  Figure 6 illustrates the results of this method with the average payment per member in each of the Top 25 farms reported by GAO (red line is the $250,000 payment limit).  Only two of the farms (#8 and #10, both from the South) averaged payments per member above the $250,000 limit.  The lowest per member average was the Midwestern farm (#23) with the highest number of members (22) but it is notable that this farm received payments only for dairy and hogs, rather than non-specialty crops. 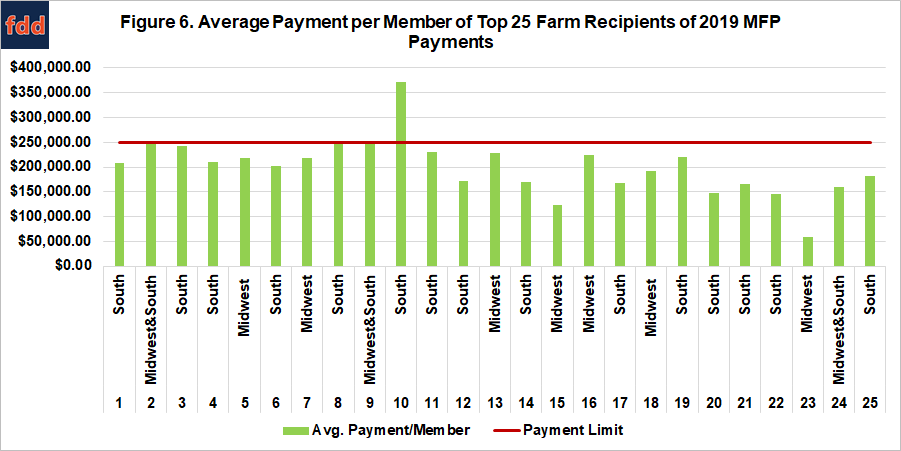 Figure 6 highlights further disparities in payments.  GAO reported that payments per individual ranged from $4 to $295,299 nationally.  GAO also mapped those payments by operation by county (GAO-20-700R, at Figure 2, page 21).  For the 48 contiguous states in the U.S., GAO reported that a total of 870,039 individuals received a total of $14.4 billion in 2019 MFP payments; the count was for all payments, not just those for the non-specialty crops and is a national average of $16,513 per individual.  The top 25 farms receiving payments not only received more than $1 million each, but the average of the payments per members in those farms was $200,334. 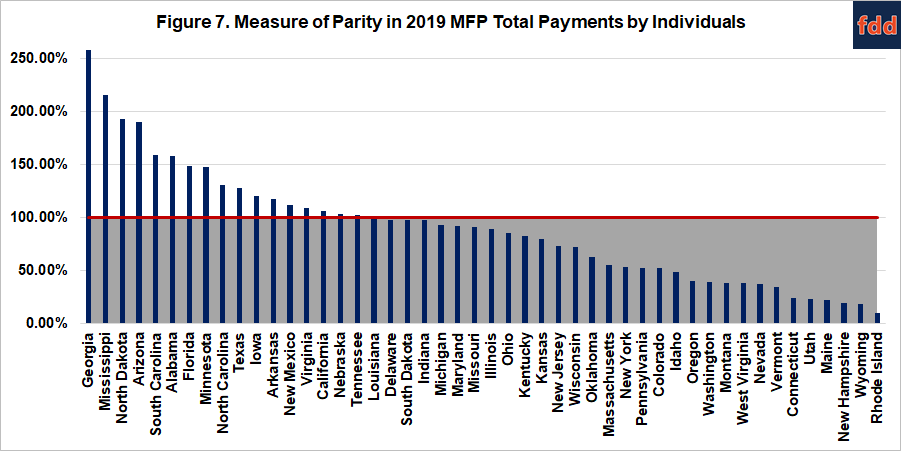 The recent GAO report provides important perspectives and analysis of the Trump Administration’s Market Facilitation Program payments in 2019.  The report highlights the ways in which a questionable methodology for calculating trade damage translated into substantial disparities in payments.  Georgia and Mississippi both received a share of MFP payments that were more than double their share of acres upon which payments were made and share of individuals receiving payments.  These disparities in federal assistance are often missed when aggregate state payments are reported.  Also lost in the numbers are the differences among actual farmers.  Twenty-five farms received more than $1 million in 2019 MFP payments and the average payment per member of those farms was over $200,000; most of these farms were also cotton farms in southern states.  The onus remains on USDA to explain fully the disparities amongst crops, farmers and states.