Relative acres of corn and soybeans vary across Illinois. Northern Illinois has more corn than soybeans acres and southern Illinois has more soybean than corn acres (see farmdoc daily, October 13, 2020). We provide more information on corn relative to soybean acres across the Midwest in this article. As acreages shift across the nation, this will serve as useful background.

Corn and Soybean Ratios Across the Midwest

Acres planted to corn and soybeans were obtained for Crop Reporting Districts (CRDs) from Quick Stats, a website maintained by the National Agricultural Statistical Service (NASS), an agency of the U.S. Department of Agriculture. Planted acres were averaged from 2015 to 2019 for both corn and soybeans. Then, average corn acres were divided by average soybean acres to arrive at ratios of corn-soybean acre ratios. A ratio value of 1.0 means that corn acres equal soybean acres. Values above 1.0 indicate that corn acres exceed soybean acres, typically a result of more corn-after-corn acres in these CRDs, particularly in the heart of the Corn Belt. Values below 1.0 indicate that soybeans exceed corn acres, likely driven by more frequent rotations of soybeans-after-soybeans or use of double-crop soybeans in a rotation with a winter crop in these CRDs. 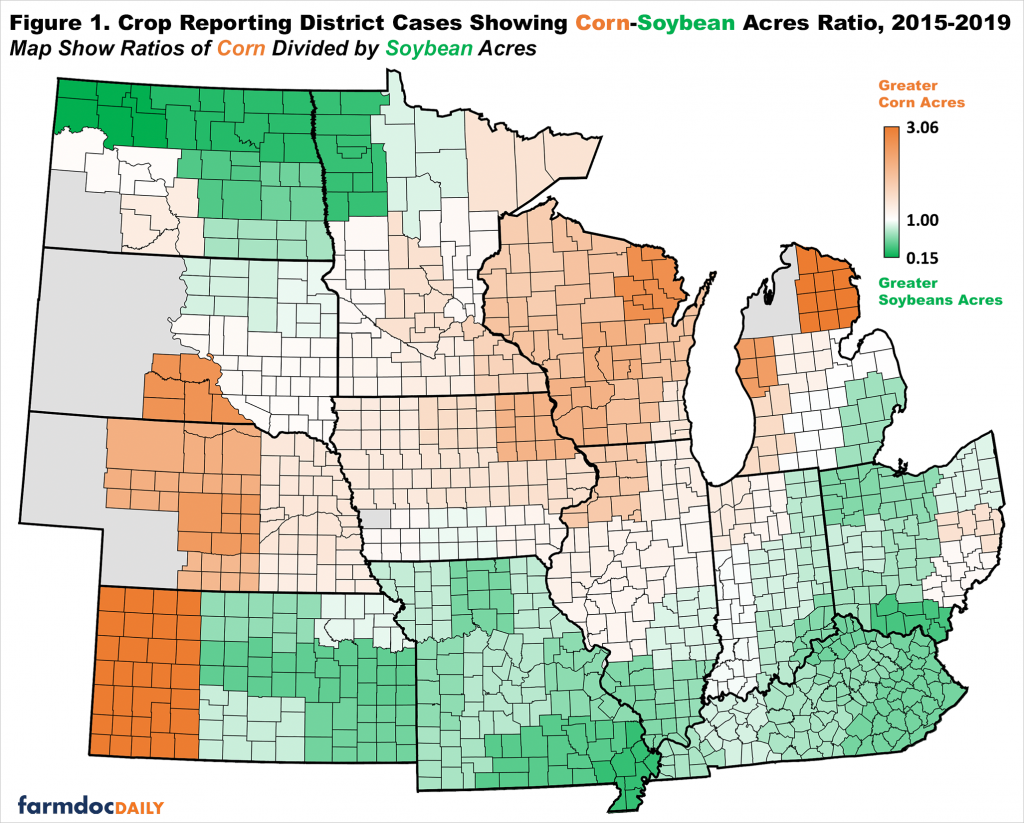 Values above 2.0 are predominant in Wisconsin. A line of CRDs from northeast Wisconsin, northwest Illinois, to northeast Iowa had ratios above 2.0. Then values tend to become lower for CRDs away from this line. Similarly, there is a line of high ratios in central Nebraska and western Kansas. Ratio values tend to decline the further Nebraska CRDs were away from this line in central Nebraska.

Two areas have ratios below 1.0. CRDs in North Dakota, South Dakota, and upper Minnesota have values below 1.0. Ratios also tend to be below 1.0 from Ohio, through eastern and southern Indiana, southern Illinois, Missouri, and eastern Kansas.

For CRDs east of the Mississippi, higher ratios are associated with northern CRDs. Ratios then decrease for more central CRDs, reaching lower levels in more southern CRDs. The same holds for southern Minnesota, Iowa, and Missouri.

Many factors will influence the overall corn-soybean acre ratios. Two factors explain much of the variability in the I-states (Illinois, Indiana, and Iowa), which are the heart of the Corn Belt:

In a regression analysis, the above two factors explain 61% of the variability in corn-soybean acres’ ratios in the I-states. In these states, corn and soybeans are the major crops accounting for over 90% of acres. Irrigation is used on a small number of acres.

Outside the I-states, the explanatory power of the two variables goes down considerably. Other factors likely influencing decisions include: