There has been a great deal of innovation in the crop insurance industry since the early 1990s. New products have been introduced, subsidy rates have been increased, and farmers have increased crop insurance use. We summarize trends in crop insurance use for corn, soybeans, and wheat in Illinois. We focus on the multi-peril products that are Federally subsidized and administered through the Risk Management Agency (RMA). In Illinois, over 85% of the corn and soybean acres are insured in recent years. The most popular product is Revenue Protection (RP), a revenue product with a guarantee increase.

In 2011, RMA introduced the COMBO product, which consolidated predecessor plans for providing crop insurance based on farm yields. The COMBO product provides three plans differing in the type of insurance provided:

In addition to the COMBO product, RMA also has products that make payments based on county-level yields. For these insurance products, yields on a farm do not matter. RMA administers area plans through the Area Risk Protection Insurance (ARPI) policy. Three plans of insurance mirror the COMBO plans:

In addition, to the COMBO and ARPI policies, Margin Protection (MP) was introduced in 2018. MP is a county-level product that provides margin protection with or without the harvest price exclusion. MP can be combined with RP and RP-HPE. More information on MP is available in farmdoc Daily articles published on September 9, 2017 and September 12, 2017.

Insurance Use Over Time

Figure 1 shows the percent of acres insured over time for corn, soybeans, and wheat in Illinois. Values in this figure are RMA reported insured acres divided by planted acres reported by the National Agricultural Statistical Service (NASS). 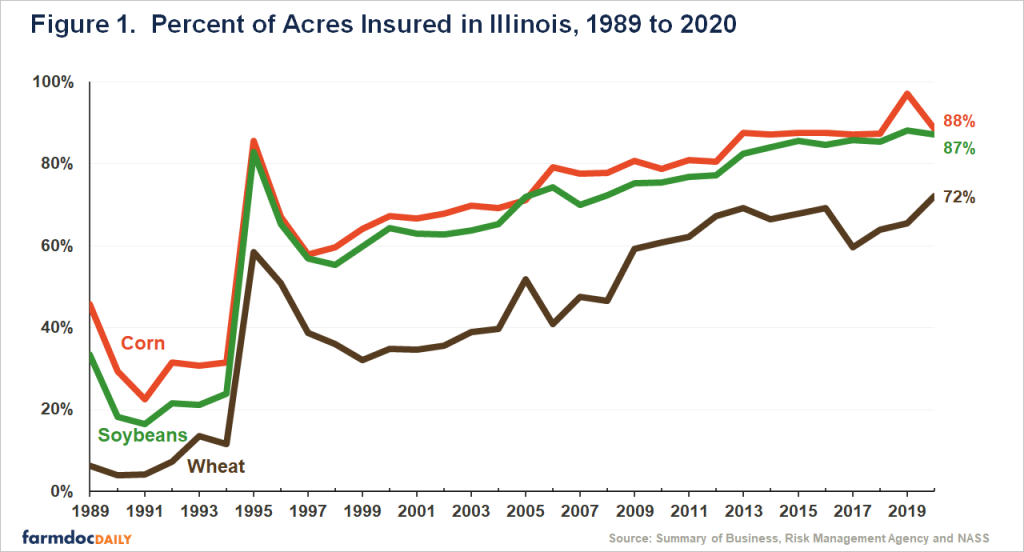 Besides participation requirements, crop insurance use was influenced by changes in premium subsidy rates in the early years. Premium subsidy rates were increased in 1994 and again in 2000. Legislated levels set in 2000 have been in place since, except for an increase in subsidy rates associated with enterprise units that occurred in the 2008 Farm Bill.

Change in Insurance Products Over Time 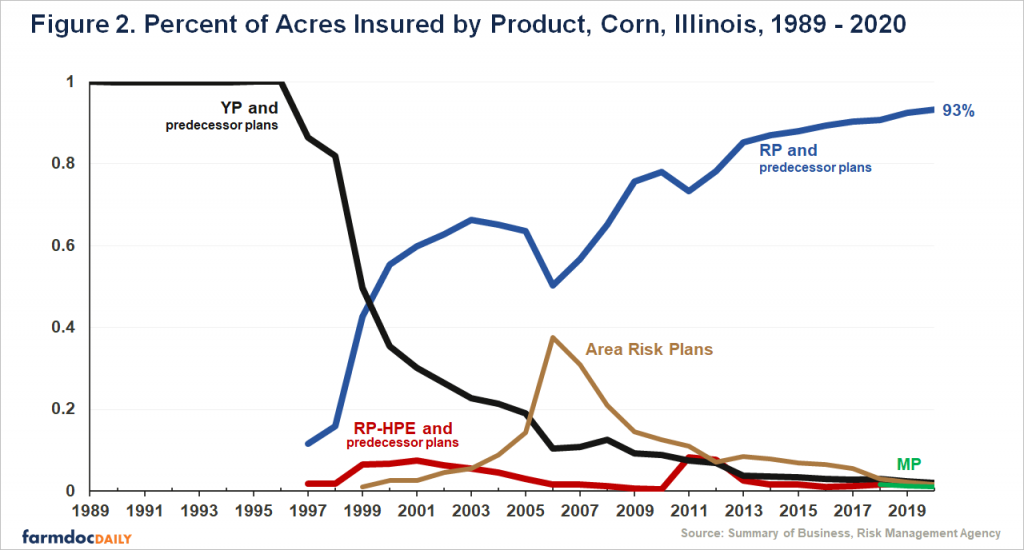 Area risk plans were introduced in 1999. Before the introduction of ARPI in 2014, area plans include Group Risk Plan (GRP), Group Risk Income Plan (GRIP), and GRIP with Harvest Revenue Option. Area risk plans increased in use from their introduction in 1999, reaching a high of 38% of acres in 2006. The implementation of higher subsidy rates for enterprise units on COMBO products in the 2008 Farm Bill has led to a decline in Area Risk Plan use. In 2020, Area Risk Plans had 2% of the acres in Illinois.

Revenue Insurance with the harvest price exclusion has never been popular. The highest use of RP-HPE occurred in 2011 and 2012 when 8% of the corn was insured with RP-HPE. In 2020, RP-HPE had 2% of insured acres. 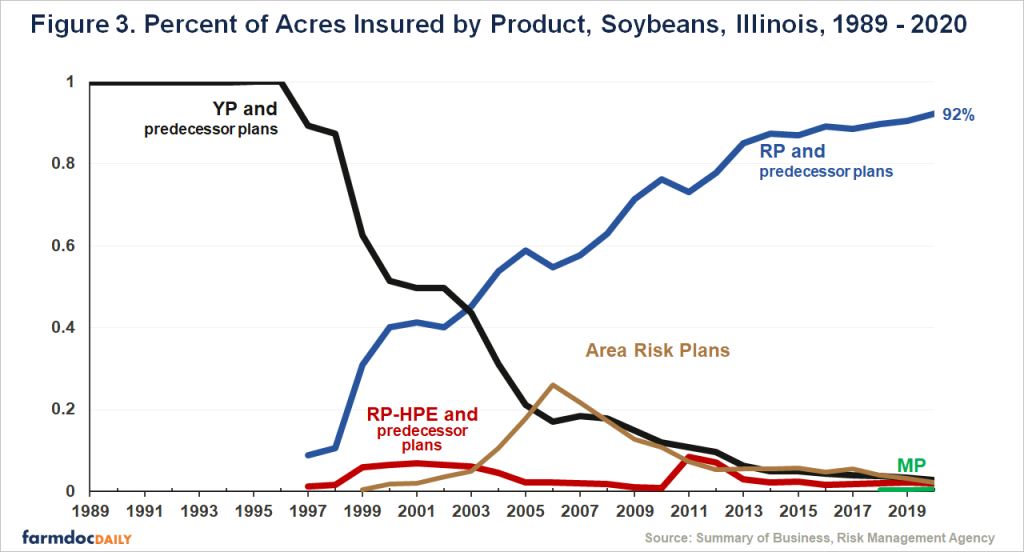 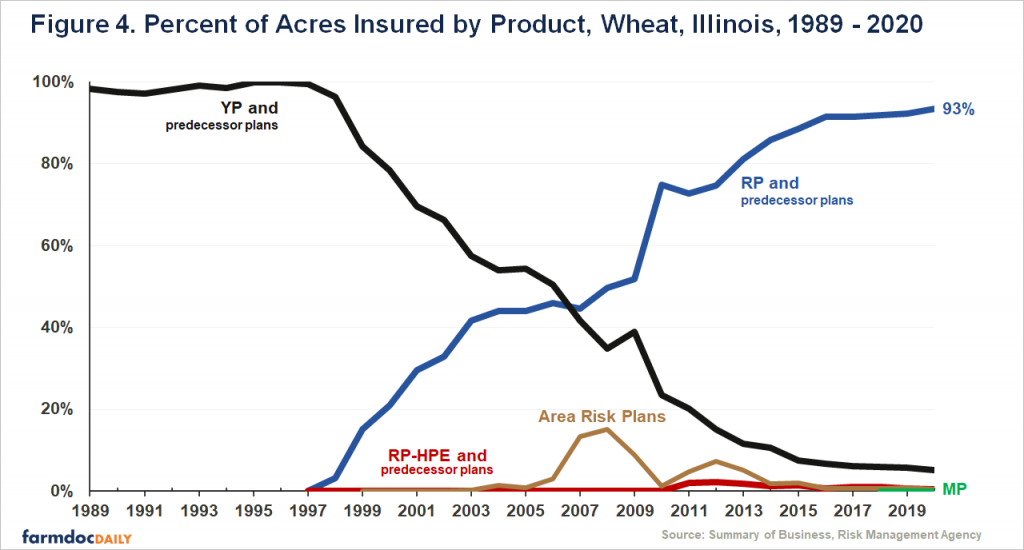 New crop insurances have been offered that can be used in conjunction with RP, which provide a higher band of coverage at a county-level. SCO has been available since 2015 but has had little use, possibly because of the PLC farm program requirement. Moreover, the band of coverage from 86% to the maximum RP coverage level of 85% likely has limited value. This year additional products offering county-level coverage will become available. It remains to be seen if farmers desire these products.