There is no shortage of doom and gloom about grain price prospects at the present time. Prices have indeed fallen to quite low levels compared to the high prices that occurred over much of 2008-2013. For some, this is proof that the high prices of 2008-2013 were a temporary spike, albeit a rather long-lasting one, instead of a shift to a permanent and higher level of prices. This flies in the face of our long-argued position that corn, soybean, and wheat prices moved to a new era of higher average nominal prices beginning in late 2006 (Good and Irwin, 2008; Irwin and Good, 2009; farmdoc daily, March 29, 2011; April 12, 2011; April 19, 2011; February 27, 2013; February 28, 2013; November 7, 2013). The new era replaced the previous era that spanned from January 1973 through November 2006. We argued that the new era of prices was primarily driven by demand shifts associated with rising biofuel production, particularly corn-based ethanol. Our projection of new era average prices and price ranges was based on an extremely simple analysis. This method turned out to be surprisingly accurate but it lacked a strong foundation in more fundamental supply and demand projections. In this article, we use our recently developed models of the relationship between the year-ending stocks-to-use ratio and marketing year average prices for corn and soybeans to provide a more rigorous economic foundation for the original new era grain price projections. These models are particularly useful in helping to frame the ongoing debate about long-term average grain prices. For additional background information on the debate about the long-term direction of grain prices see the farmdoc daily articles by Professor Carl Zulauf on March 11, 2016 and by Professor Paul Peterson on September 3, 2015.

Our first new era projections of grain prices were published in Good and Irwin (2008) and Irwin and Good (2009). In these publications, we projected the likely average and range in monthly farm prices received in Illinois. The projection of average monthly prices in the new era was centered on corn since it was believed that the new era of prices that began in late 2006 was associated with the rapid expansion in biofuels (ethanol) production and the impact on corn demand. The analysis began with the identification of two previous price eras for corn and the change in average price between those two periods. The first era was the post-war period that extended from January 1947 through December 1972 when the average monthly corn price in Illinois was $1.28 per bushel. The second period, associated with the rapid increase in corn export demand in 1973, extended from January 1973 through November 2006 when the average monthly price of corn was $2.42. The projection of the average price in the new era made the simple assumption of an equal percentage price change that occurred between the previous two eras. The average price projection of $4.60, then, was calculated as ($2.42/$1.28) X $2.42 = $4.60. Soybean prices were first projected at $11.50 using a similar approach as corn. In later publications we switched to using a ratio to corn prices–initially 2.3:1 and $10.58 then to 2.4:1 and $11.04. Likewise, the average price of wheat was based on an expected ratio of wheat to corn prices of 1.26, resulting in a projection of $5.80.

Since U.S. marketing year average prices are of more general interest than monthly prices and are typically the focus of price forecasts, we compute new era average price projections for U.S. average marketing year prices using the same ratio analysis applied to Illinois monthly prices. Average farm prices for the 1947-48 through 2015-16 marketing years are presented in Figures 1 and 2 for corn and soybeans, respectively. This sample period has the same starting year as the original monthly analysis (January 1947) and extends through projections for the current marketing year. The first post-war era extends from 1947-48 through 1972-73, with an average marketing year corn price in the U.S. of $1.28 per bushel. The second period extended from 1973-74 through 2005-06 when the average marketing year price of corn was $2.36. The average price projection for the latest era is $4.35, calculated as ($2.36/$1.28) X $2.36 = $4.35. Soybean prices are projected using a 2.4:1 ratio to corn price, or $10.44. 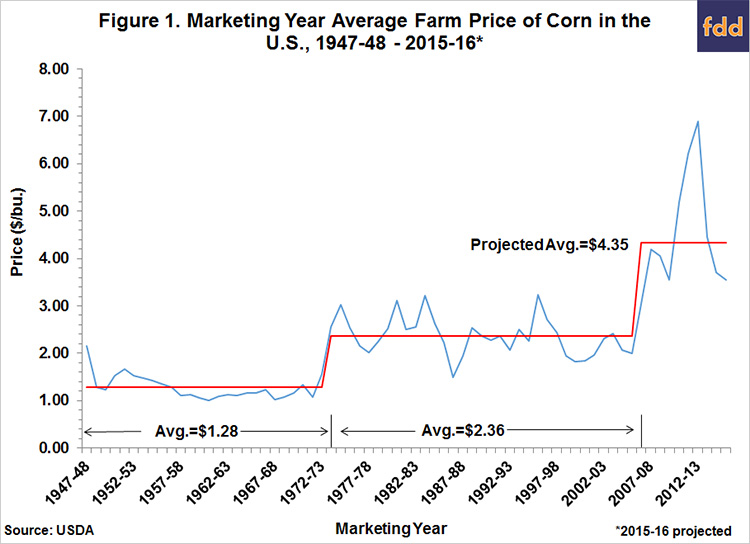 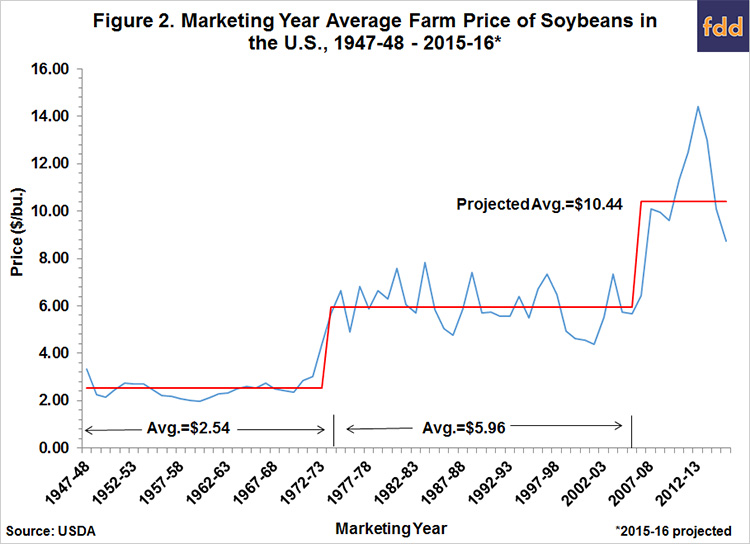 The marketing year ending-stocks-to use ratio is a widely used indicator of the supply and demand “tightness” of corn and soybean market conditions and is very commonly used to project prices. Tomek and Kaiser (2014, p. 379) note that a variety of non-linear functional forms are used in these models because, “This accommodates the idea that, as current stocks approach zero (but cannot be less than zero), price must necessarily rise sharply to ration these stocks among competing demands.” In a recent article (farmdoc daily, April 6, 2016), we followed the work of Tomek and Kaiser (2014, pp. 378-382) and Verteramo and Tomek (2015) and estimated a base reciprocal regression model of the U.S farm price of corn and soybeans and the ending stocks-to-use ratio for the period 1990-91 through 2005-2006, skipped 2006-07 as a transition year, and then estimated relationships after 2005-06 that are exactly parallel to the base period model. In the new model, we assumed the slope is unchanged between the base period and relationships after 2005-06, but the intercept varies in the latter period to reflect demand shifts that occurred after 2005-06. The years after 2005-06 were grouped into four demand scenarios for corn (weak, moderate 1, moderate 2, and strong) and three demand scenarios for soybeans (weak, moderate, and strong). This specification differs from our previous model specifications that fit a regression to the stocks-to-use for two different time periods for corn (1990-91 through 2005-06, and 2007-08 through 2015-16) and a single time period for soybeans (1990-91 through 2015-16).

Figures 3 and 4 repeat the stocks-to-use and price models for corn and soybeans, respectively, presented in our recent article. We refer the reader to that article (farmdoc daily, April 6, 2016) for a detailed discussion of the new models. Note that forecasting marketing year average prices using the new stocks-to-use and price models is a two-step process. The stocks-to-use ratio must be projected first and then the appropriate scenario for demand has to be specified. We illustrated that two-step process for the 2016-17 marketing year using alternative balance sheet projections for corn and soybeans in a farmdoc daily article of April 13, 2016. 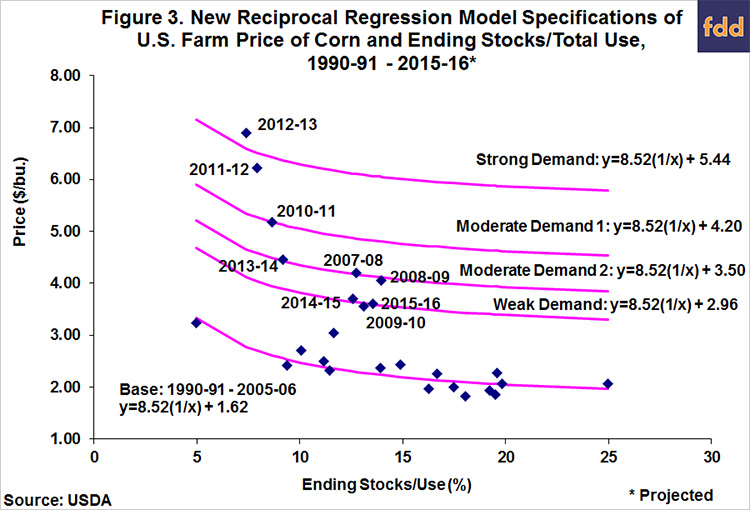 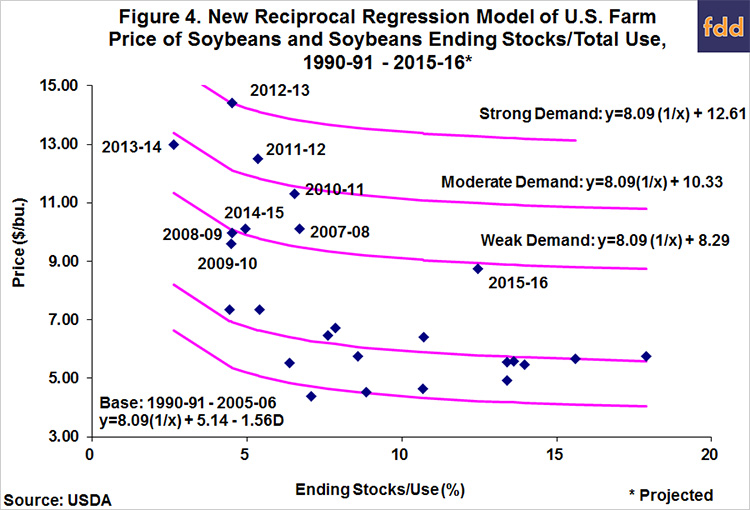 Finally, it is important to highlight the nature of the pricing models presented in Figures 3 and 4. Tomek and Kaiser (2014, p. 378) classify these types of models as “price determination equations” rather than formal structural models of supply and demand. They point out the complexity of realistic structural models that have separate equations for supply and the various demand categories. As a result, analysts often turn to, “…graphs, tables, and simple regression models of price determination to summarize information.” They also helpfully observe that, “The research objective may be to provide a forecasting tool, but more generally, the analysis helps the researcher depict current economic conditions relative to the historical evidence.” The bottom-line is that the regression models in Figure 3 and 4 cannot be directly derived (at least easily) from underlying structural and mathematical models of supply and demand. However, this does not mean the models are disconnected from supply and demand for corn and soybeans. There is a connection, and it can be best described as conceptual and logical from an economic standpoint.

We now proceed to analysis of the new era price projections for corn and soybeans using the reciprocal regression models in Figures 3 and 4. Since the regression models project the farm price of corn and soybeans for a wide range of stocks-to-use ratios, we need some method of converting the relationships to a single average price that can be compared to our earlier new era projections. We use a multi-step process, outlined as follows: 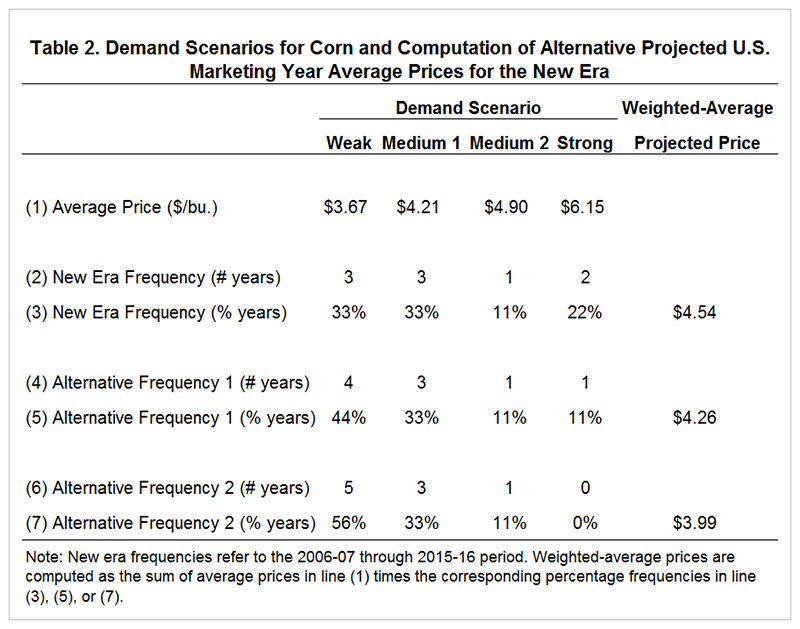 Based on the ending-stocks-to use ratios for the past 26 years and the frequency of weak, moderate, and strong demand scenarios over the past nine years, the new ending stocks and price models project the U.S. average marketing year farm price of corn and soybeans in the new era at $4.54 and $10.62, respectively. The computation for corn is,

As expected, these projections are close to the average prices actually experienced over the past nine marketing years. They are not exactly the same because the model averages represent points on the respective regression lines while the actual averages generally do not lie on the lines.

The level of long-term average grain prices is central to farm incomes, rents, land values, and expenditures for commodity support programs. Our position for some time has been that grain prices moved to a new era of higher average nominal prices beginning in late 2006. We re-compute our original projections using marketing year average prices and project new era averages of $4.35 and $10.44 per bushel for corn and soybeans, respectively. For comparison purposes, we make projections of new era average prices based on reciprocal regression models of the U.S farm price of corn and soybeans and the ending stocks-to-use ratio, and find that these are very consistent with simple projections based on a ratio of the previous era average prices. Since the new stocks and price models are based on a stronger economic foundation, we are more confident in these results. Our most conservative scenarios project U.S. average corn and soybean prices of about $4 and $10 in the new era, and averages of $4.25 and $10.50 seem quite plausible. In sum, we conclude that the current period of relatively low corn and soybean prices reflects a combination of moderately high stocks-to-use ratios substantially influenced by good crop weather around the world and a weak demand environment, not a halt to the new era of higher average (nominal) grain prices.

Irwin, S., and D. Good. "The Relationship between Stocks-to-Use and Corn and Soybean Prices: An Alternative View." farmdoc daily (6):66, Department of Agricultural and Consumer Economics, University of Illinois at Urbana-Champaign, April 6, 2016.

Irwin, S., and D. Good. "How Long Should We Expect Corn and Soybean Prices to Remain Above or Below Average?" farmdoc daily (3):213, Department of Agricultural and Consumer Economics, University of Illinois at Urbana-Champaign, November 7, 2013.

Peterson, P. "How Long Will It Take until Corn Prices Recover?" farmdoc daily (5):162, Department of Agricultural and Consumer Economics, University of Illinois at Urbana-Champaign, September 3, 2015.