Increased prices, new and continuing supply chain problems, and more in the wake of Russia’s unprovoked war on Ukraine and the Covid-19 pandemic may be reinvigorating discussions and questions about the markets, competition, antitrust and agriculture (see e.g., farmdoc daily, April 26, 2022; April 13, 2022; April 5, 2022; and Irwin, April 14, 2022).  From fertilizer prices to cattle markets, the issues are increasingly in the spotlight, front and center in policy discussions (see e.g., U.S. Senate, Committee on Agriculture, Nutrition, and Forestry, Hearing, April 26, 2022; House Committee on Agriculture, Hearings, April 27, 2022).  Antitrust and competition policies possess a long, complicated history and agriculture has often been in the middle of the discussion.  For background to the discussion, this article presents a summary review of the legislative history for the major antitrust, antimonopoly and fair competition statutes.

U.S. antitrust legislation originated in the era known as the Gilded Age at the end of the 19th Century; it was the reign of the Robber Barons, famous names such as Andrew Carnegie, John Pierpont Morgan and John D. Rockefeller.  The years around the turn of the 20th Century were dominated by the Trust Movement, in which economic concepts were mixed with Social Darwinism to achieve the goal of monopoly control across all sectors.  At the time, the trusts were new entities that sought to eliminate competition and competitors, accumulating vast amounts of wealth and power, including political power.  As just one example, to create the U.S. Steel monopoly, J.P. Morgan bought out Andrew Carnegie for an amount that made Carnegie the richest man in the world.  Morgan also created the Northern Securities Company to monopolize the western railroads and, of course, Rockefeller created the Standard Oil Company, which monopolized the oil industry and abused power through a cartel with the railroads.  For American agriculture these issues were prevalent and important; commodity trusts were also created, including for tobacco, cotton and sugar, while monopolization in the railroad sector was particularly problematic for farmers.  (see e.g., Sawyer 2019; Wu 2018; Hovenkamp 2015).

Senator John Sherman (R-OH), the younger brother of the famous Civil War general William T. Sherman, introduced legislation to protect trade and commerce from “unlawful restraints and monopoly” (S.1 of the 51st Congress; December 4, 1889; H. Rept. 51-1707).  On the Senate floor, he argued against the “new form of combination commonly called trusts, that seeks to avoid competition” by “placing the power and property of the combination under a few individuals, and often under the control of a single man” and that the “sole object of such a combination is to make competition impossible.”  He added that if the “concentrated powers of this combination are intrusted [sic] to a single man, it is a kingly prerogative, inconsistent with our form of government, and should be subject to the strong resistance of the State and national authorities,” because if the United States “will not endure a king as a political power we should not endure a king over the production, transportation, and sale of any of the necessaries of life” (Congressional Record, March 21, 1890, at 2457).

The Sherman Antitrust Act languished somewhat in the hands of the Courts and the Department of Justice, until the presidency of Theodore Roosevelt, the country’s most famous Trustbuster.  Roosevelt’s DOJ first went after Morgan’s Northern Securities Company in 1902 (Morris 2001, at 87-93; Sawyer 2019).  It would be two dozen years before Congress took up the issue again. 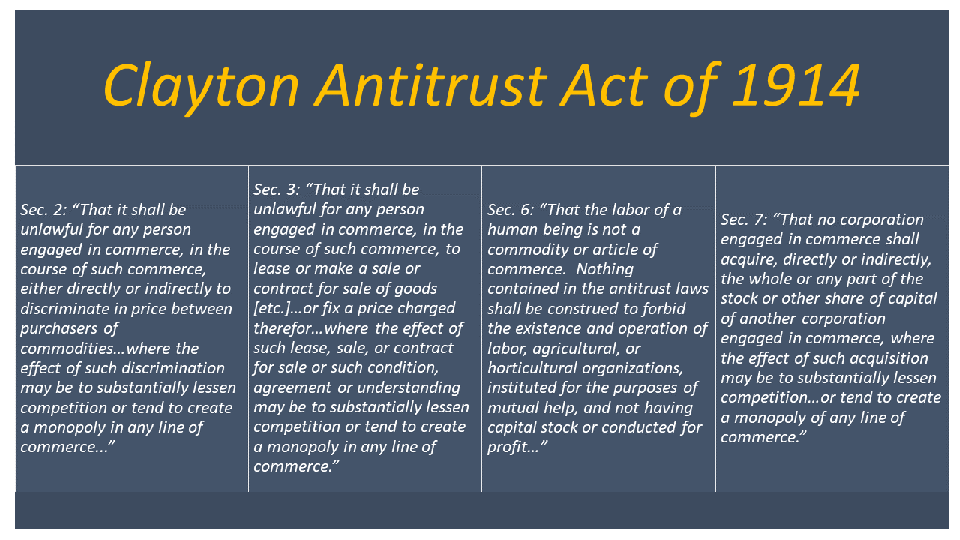 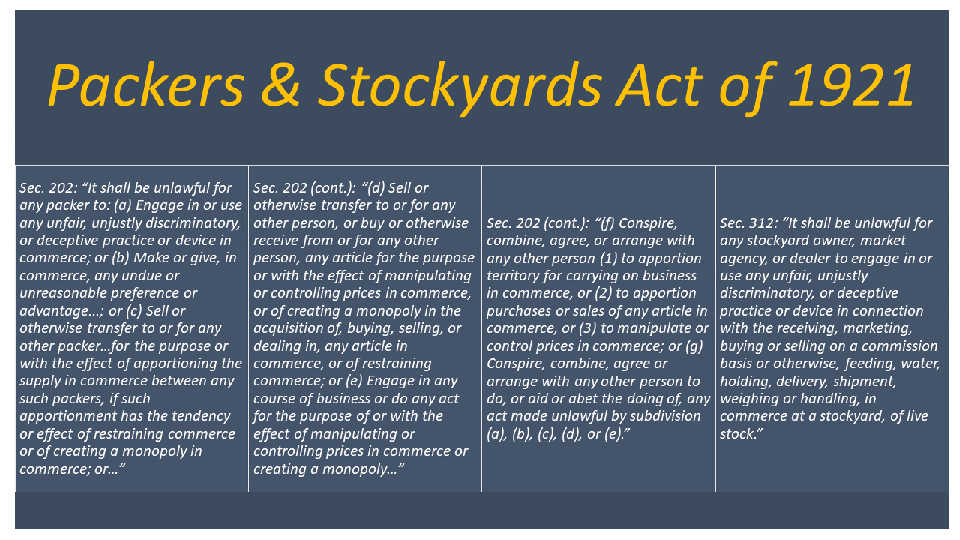 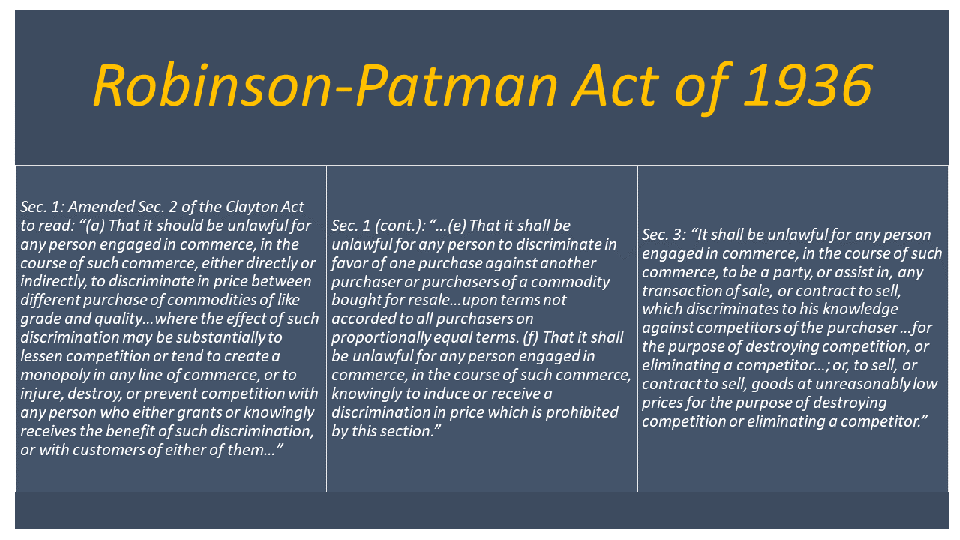 (5) The Celler-Kefauver Act, 1950: Mergers and Acquisitions 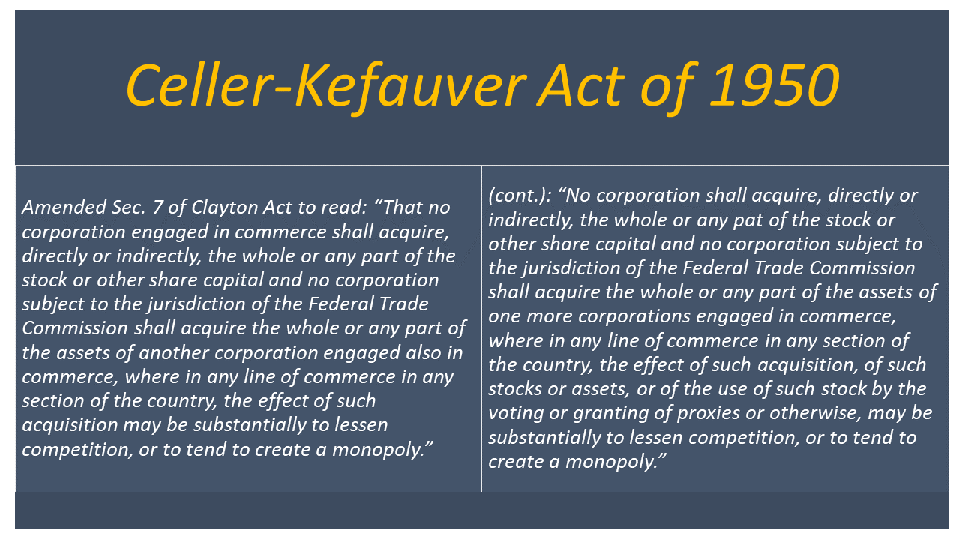 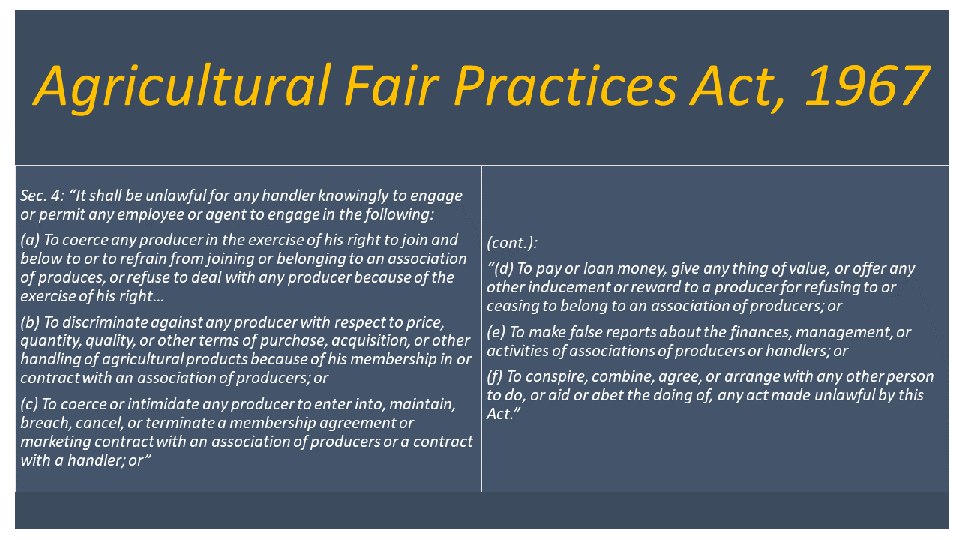 Today, the antitrust statutes occupy Chapter 1 of the title on Commerce and Trade, with the Sherman Act in the first seven sections (15 U.S.C. §§1-38).  Federal law on the matter still opens with the broad declaration that “[e]very contract, combination in the form of trust or otherwise, or conspiracy, in restraint of trade or commerce . . . is declared illegal” (15 U.S.C. §1).  The statute and its legislative history present only part of the history for competition and antitrust law in the United States.  The Federal Judiciary has played an enormous and profound role, but any exploration of the topic should begin with the provisions of the U.S. Code and a basic understanding of how the law came to be, and what Congress intended.  There is a through line, a single connecting thread that runs through the legislation from 1890 onward, and it is the fundamental importance of competition, the protection of fair, equitable, functional and robust competition.  The protection of competition by the rule of law rather than the rule of the wealthiest or most powerful is the North Star of antitrust law.