download PDF
May 9, 2022
farmdoc daily (12):66
Recommended citation format: Irwin, S. "The Impact of Late Planting on the State Average Yield of Corn in Illinois." farmdoc daily (12):66, Department of Agricultural and Consumer Economics, University of Illinois at Urbana-Champaign, May 9, 2022. Permalink

A recent farmdoc daily article (April 28, 2022) examined the impact of late planting on the U.S. average corn yield.  The regression estimates indicated a 10 percent increase in late planting leads to about a 2 bushels per acre decrease in the U.S. average corn yield.  The results showed that the impact of late planting is linear and rather modest, causing the national corn yield to deviate above or below trend by no more than three bushels in most years.  This result is surprising when compared to the findings on planting date impacts from agronomic field trials, which show non-linear and large yield penalties for planting corn after mid-May.  One possible explanation for the difference is that the regression estimates are based on U.S. average observations, while the agronomic field trials are state specific.  The purpose of this article is to compare regression estimates of late planting impacts and field trial results for the same state—Illinois.  This will be helpful in assessing the role of geographic aggregation in the differing findings between the two types of studies.

The starting point for the analysis is defining the beginning date for a significant late planting penalty for corn yields.  Like our recent analysis for the U.S. (farmdoc daily, April 28, 2022), we define the beginning date for substantial late planting penalties on corn yield in Illinois to be May 30th from 1980 through 1985 and May 20th from 1986 onwards.  The change in cutoff dates in the mid-1980s reflects recommendations for earlier planting that appeared around that time.

Figure 1 shows the percentage of corn planted late in Illinois based on the previous definitions over 1980 through 2021.  On average, late planting was 15.7 percent, with the bulk of the observations between about 5 and 20 percent.  There are four years with exceptionally high levels of late planting: 1995, 2002, 2009, and 2019.  The largest level of late planting in the sample is 74 percent in 2019.  There is no evidence of a trend up or down over time in the late planting percentage, which suggests that producer behavior in aggregate with respect to late corn planting in Illinois has been quite stable (after adjusting for earlier planting through time). 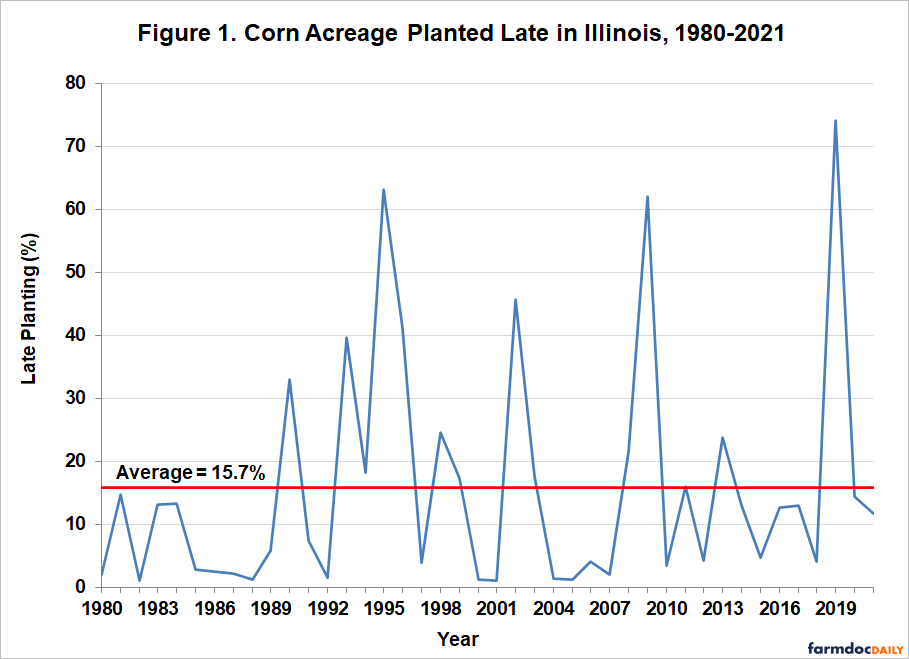 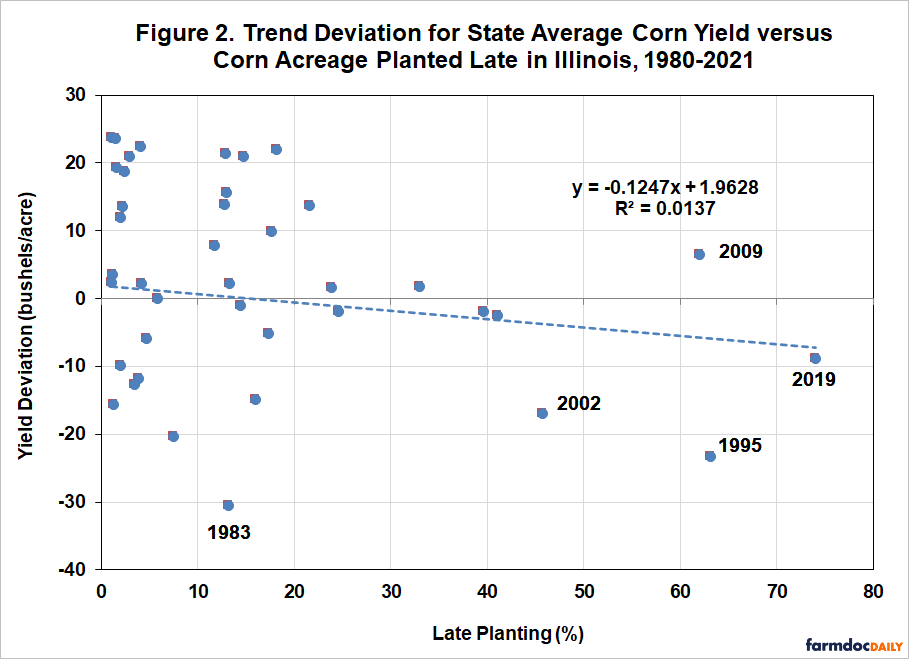 It is also important to emphasize that the explanatory power of the regression model in Figure 2 is quite low, as the R2 is only 1.4 percent.  The implication is that there is a huge range in yield outcomes for any given level of late planting.  Likewise, there are years with low levels of late planting and low yields and vice versa.  Two years provide good examples.  Late planting was well-above average in 2009 but the corn yield was above trend due to a cool, wet summer.  Conversely, late planting in 1983 was relatively low but corn yield was extremely low due to a severe drought that summer.

We can now compare the state regression results for late planting in Illinois with results for agronomic field trials for corn planting dates in Illinois (farmdoc daily, April 14, 2022).  Figure 3 presents the results from 42 central and northern Illinois field trial locations over 2007-2021.  Data from these experimental field trials reveal two key patterns.  First, there is a relatively wide time window for planting corn in Illinois and expecting “normal” yields.  This window runs from roughly early April though early May.  Second, the yield penalty is non-linear and increases sharply for planting past mid-May, with reductions as large as 10 to 20 percent.  If we assume an Illinois average trend yield for corn in 2022 of 195 bushels per acre, this could then be used to project yield reductions of 20 to 40 bushels per acre below trend for the corn planted past mid-May, with large resulting impacts on the Illinois state average yield of corn.  This computation is not meant to be exact, but only to illustrate the non-linear nature of the yield penalty estimated for planting corn in Illinois after mid-May using data from experimental trials. 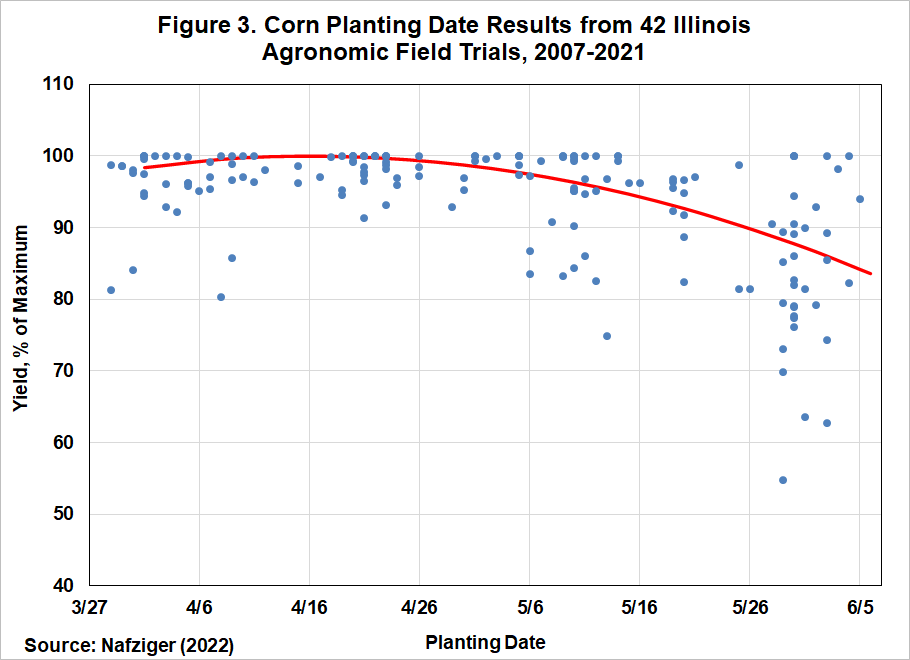 It is important to keep one thing in mind when considering late planting impacts on corn yield from either type of study.  The low explanatory power of late planting means that other factors, in particular summer weather, are much more important in explaining deviations from trend yield (e.g., Nielsen, 2015).  This is highlighted in Figure 4, which shows trend yield deviation for corn in Illinois versus July precipitation over 1980 through 2021.  Nearly half of the trend yield variation from year-to-year is explained by this single variable.  The point is not that late planting should be ignored when projecting corn yield, but rather, that its importance should kept in perspective. 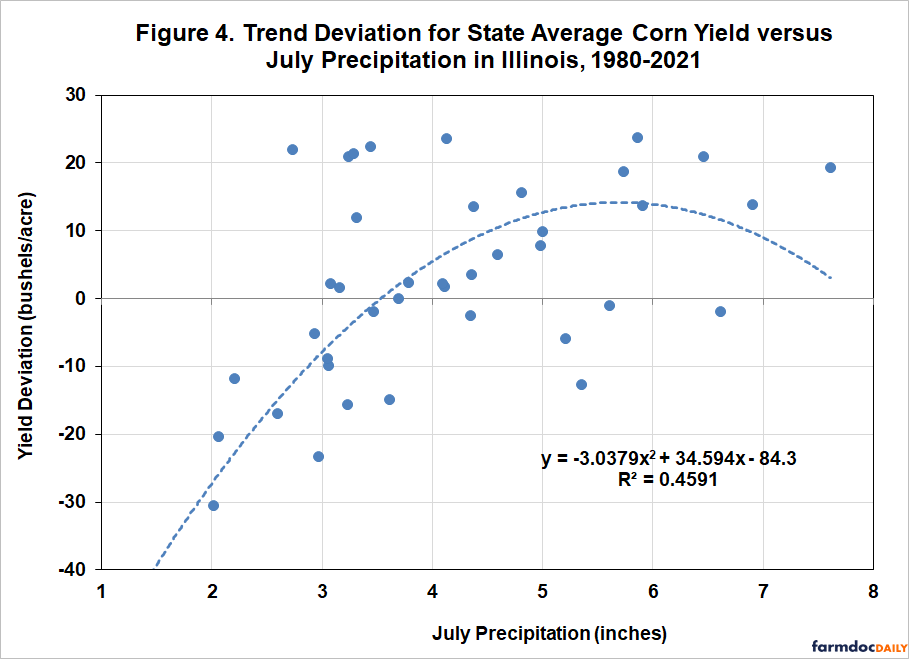 In this article, we compare regression estimates of late planting impacts and field trial results for the same state—Illinois.  The regression estimates indicate a 10 percent increase in late planting leads to the Illinois average corn yield decreasing by about 1.3 bushels per acre.  Mirroring earlier results for this U.S., the overall impact of late planting is linear and rather modest, causing the Illinois corn yield to deviate above or below trend by no more than two bushels in most years.  This can be compared to the results from field trials that the yield penalty for planting past mid-May is non-linear and substantial, with reductions as large as 10 to 20 percent.  There is no single explanation for the different results between the two types of studies.  Whatever is the correct explanation, it is important to keep in mind that the explanatory power of late planting is low in both types of studies.  Other factors are much more important.  For example, July precipitation explains nearly half of the trend yield variation from year-to-year in Illinois.  It is no wonder that the “golden number” for corn production in the U.S. is July precipitation.  Planting date is a sideshow by comparison.

Irwin, S. "What Do We Know About the Impact of Late Planting on the U.S. Average Corn Yield?" farmdoc daily (12):59, Department of Agricultural and Consumer Economics, University of Illinois at Urbana-Champaign, April 28, 2022.