The Inflation Reduction Act of 2022 was signed into law by President Biden on August 16, 2022, becoming the 169th public law of the 117th Congress (Wang, August 16, 2022; Tankersley, August 16, 2022; P.L. 117-169).  Previous articles reviewed the funding and provisions contained in the bill relevant to the Farm Bill and the Agriculture Committees (farmdoc daily, August 11, 2022; August 12, 2022).  This article reviews the bigger picture of what is included in the entire bill as reported thus far by the Congressional Budget Office (CBO) and the Joint Committee on Taxation (JCT).  A total compiled score from multiple sources is summarized below as part of the introduction to and overview of the discussion. 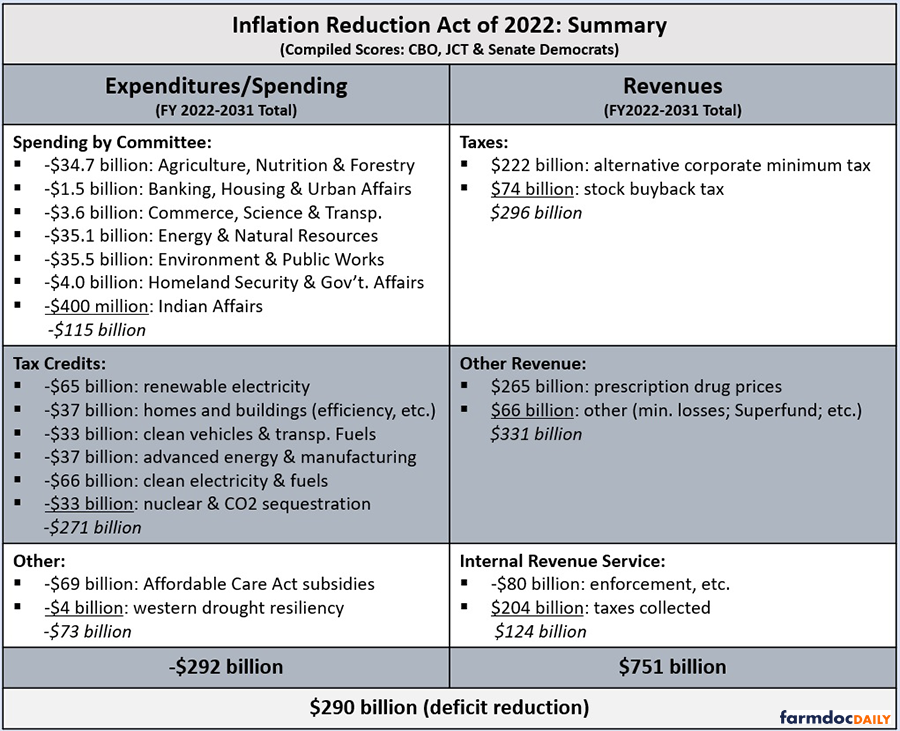 The Inflation Reduction Act (IRA) of 2022 is not ordinary legislation, nor legislation in the ordinary course of business or the regular order of Congress.  It is reconciliation legislation that operates under specific statutory authorities, and special procedural rules.  Federal budget law provides for the inclusion of reconciliation instructions in a concurrent budget resolution (2 U.S.C. §641).  Reconciliation consists of instructions written by the Congressional Budget Committees and agreed-to by both the House and Senate in the budget resolution, but not signed into law by the President.  Congress instructs committees to take actions related to the budget, which are compiled into a single legislative vehicle that is considered under special rules.  The IRA 2022 began as Senate Concurrent Resolution 14 which set budget levels for fiscal years (FY) 2023 through 2031; Title II provided reconciliation instructions that included the Agriculture Committees.  The specific instructions to the Senate Committee on Agriculture, Nutrition and Forestry (Senate ANF) were to “report changes in laws within its jurisdiction that increase the deficit by not more than” $135 billion “for the period of fiscal years 2022 through 2031” (S. Con. Res. 14).

On August 11, 2022, the Congressional Budget Office (CBO) produced its initial score for the Inflation Reduction Act.  The CBO score reported a net increase in the deficit from the titles of the bill by committee for fiscal years (FY) 2022 through 2031 totaling $114.8 billion (CBO, August 11, 2022).  Figure 1 illustrates the CBO score.  The provisions from the Senate Committee on Agriculture, Nutrition, and Forestry consist of just over 30% of this total score. 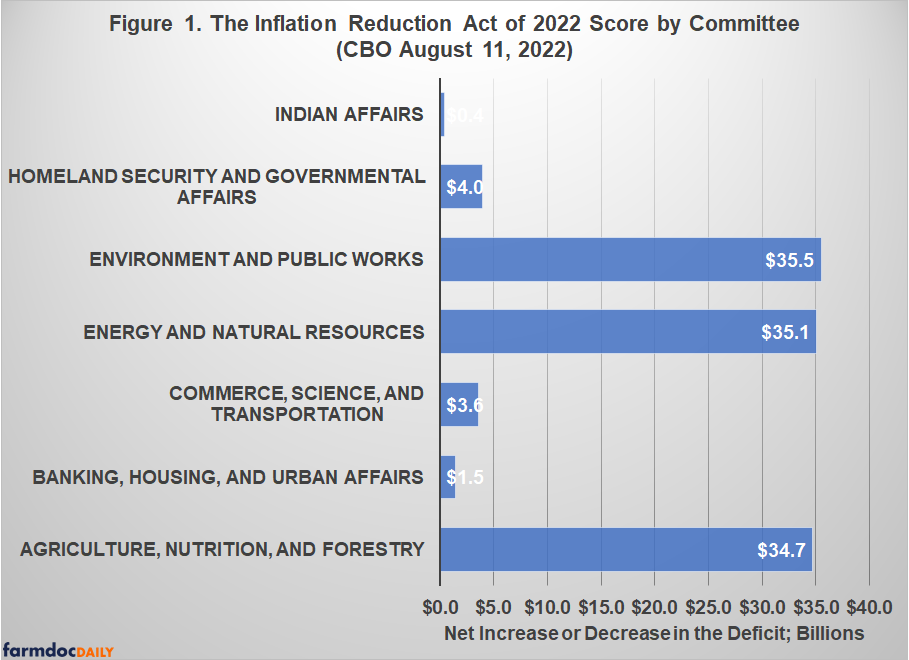 The CBO score did not include estimates for the Committee on Finance, which wrote the tax provisions of the bill.  The Joint Committee on Taxation (JCT) estimated the budget effects of the revenue provisions in the bill as it passed the Senate (JCT, August 9, 2022).  The JCT score can be broken into two categories: (1) tax changes to raise revenue that goes towards reducing the deficit; and (2) tax credits (or expenditures through the tax code) for certain activities.  Figure 2 illustrates the deficit reduction tax changes, which are a new corporate alternative minimum tax and an excise tax on corporate stock buybacks.  In total, JCT estimates $296 billion in deficit reduction for FY2022 through 2031. 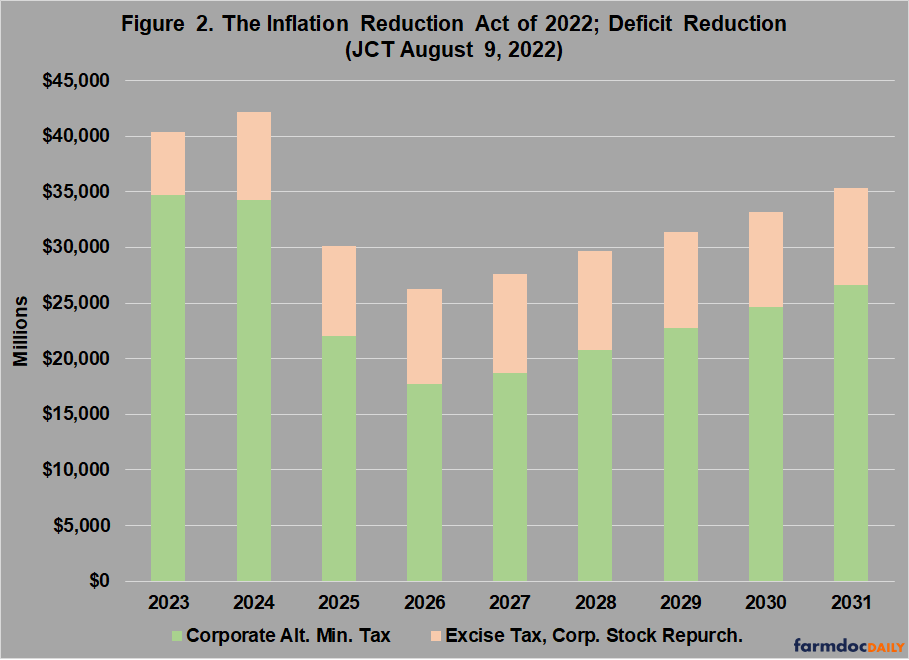 In the second category, the Inflation Reduction Act extends, modifies and creates a set of tax credits for renewable energy, energy efficiency and fuels.  These include tax credits for: solar, wind and other renewable sources of electricity; biodiesel, renewable diesel, sustainable aviation and clean hydrogen fuels; energy efficiency in homes, commercial buildings and other properties; clean vehicles, new, used and commercial, as well as refueling property; advanced energy and manufacturing; and clean electricity production, investments and qualified facilities. It also includes tax credits for zero-emission nuclear power production and for carbon dioxide sequestration.  In total, JCT estimates $271 billion in FY2022 to 2031 for these tax credits.  Figure 3 illustrates the JCT scores by category, which generally align with the Parts 1-5 and Part 7 of the subtitle of the bill. 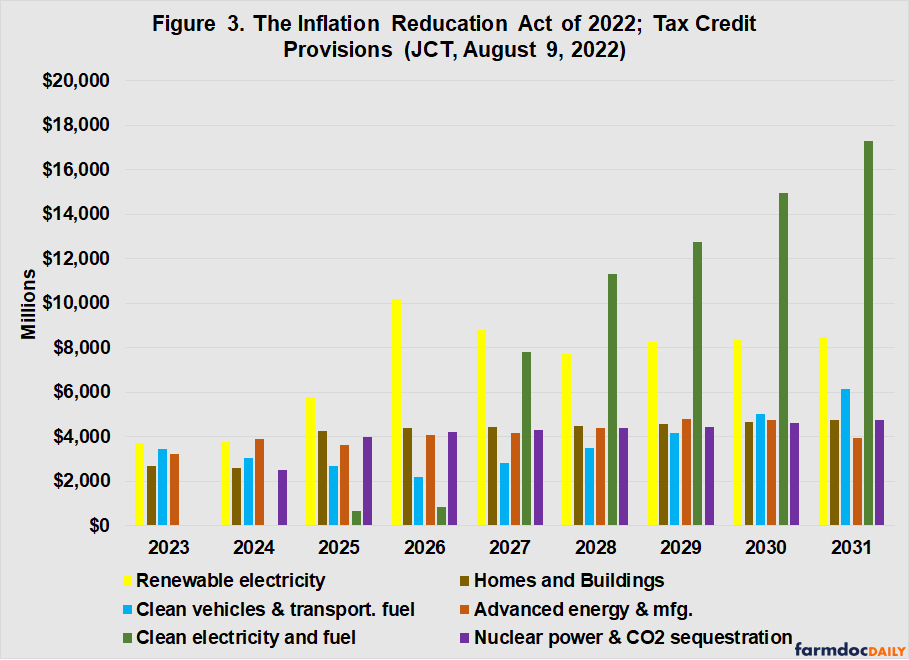 Figures 4a through 4d break down the JCT score by individual tax credits within the categories in Figure 3.

Not included in the above figures, but also scored by JCT are a few provisions that raise funding by extending existing provisions.  The bill permanently extended the tax that funds the Black Lung Disability Trust Fund, raising $1.1 billion (FY2022-2031) and Reinstated the Superfund for environmental cleanups, raising $11.7 billion (FY2022-2031).  The bill also extended the limitation on excess business losses for noncorporate taxpayers for two years, raising $52.8 billion.  Finally, the Inflation Reduction Act increased the research credit against payroll tax for small businesses at a cost of $168 million (FY2022-2031).

To round out the review of the entire Inflation Reduction Act are two categories of provisions written by the Committee on Finance but not scored by JCT.  The first category pertained to health care and prescription drugs.  Congress authorized Medicare to negotiate prescription drug prices to reduce costs.  Initial estimates are that this provision will save the federal government between $229 billion and $265 billion over ten years (FY2022-2031) (compare, Penn Wharton Budget Model, August 12, 2022; Senate Democrats, August 11, 2022; see also, Sachs, August 10, 2022).  Congress also extended subsidies under the Affordable Care Act, initially estimated to cost approximately $64 billion to $69 billion.  These provisions are contained in Subtitles B and C (respectively) of Title I (P.L. 117-169).

The second has been the source of much political and partisan attention (see e.g., Rappeport and Hsu, August 19, 2022; Cercone, August 12, 2022).  In Part 3 of Subtitle A of Title I—the subtitle for deficit reduction—the Committee on Finance appropriated billions to the Internal Revenue Service (IRS) to enhance services and improve taxpayer compliance.  Congress appropriated $3.2 billion to improve taxpayer services and $4.75 billion for modernization.  Congress also appropriated $25.3 billion for operations support, but the provision that has received the most political attention was the $45.6 billion appropriated to improving enforcement of tax laws.  Figure 5 summarizes these provisions. 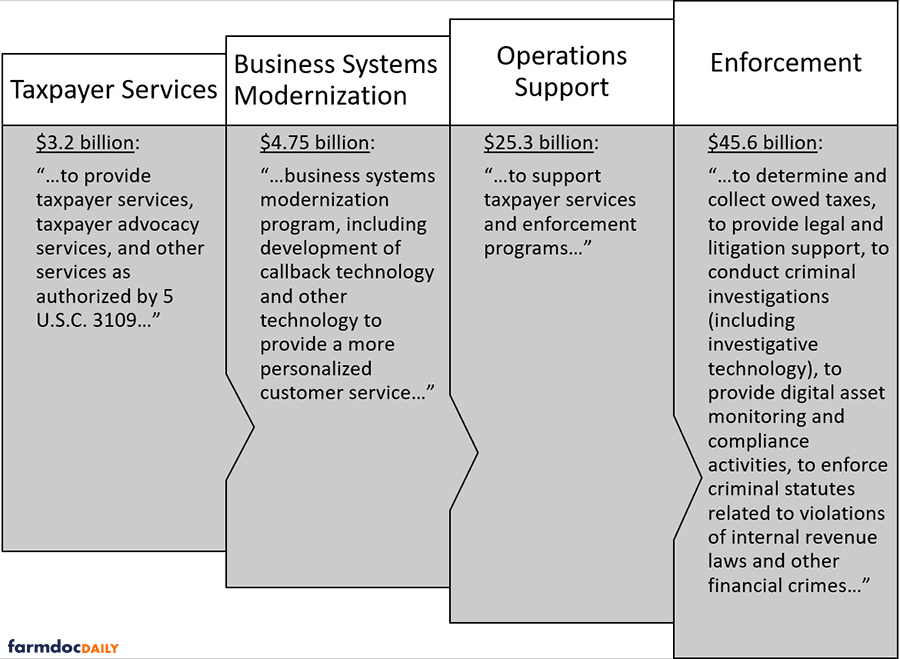 Included in the funding for the IRS is another $725 million for administrative expenses such as the inspector general, the office that writes the regulations and the U.S. Tax Court.  In total, the Inflation Reduction Act provides a nearly $80 billion investment in the IRS which is expected to improve compliance and increase revenue, reducing the federal deficit.  One estimate scored this as raising $147 billion over FY2022 to 2031 (Penn Wharton Budget Model, August 12, 2022).  Others have estimated it would raise $204 billion to contribute a net $124 billion to deficit reduction over the 10 years (FY2022-2031) and help reduce the reported $600 billion annual gap between the taxes that are legally owed and the taxes that are actually paid (Jacoby, August 12, 2022).

According to a summary document prepared by Senate Democrats, the Inflation Reduction Act of 2022 will raise $737 billion and spend $437 billion on climate change and energy investments, as well as another $64 billion on extending the Affordable Care Act subsidies and $4 billion for western drought resiliency (Senate Democrats, August 11, 2022).  The Act is therefore expected to contribute close to $300 billion to deficit reduction over the next 10 years.  The Senate Democratic estimates were compiled from the scoring estimates prepared by the Joint Committee on Taxation and the Congressional Budget Office but not at all scoring has been completed and the final amounts could change.  The unique and arguably historic legislation has been reviewed in three parts, with the first two focused on the funding appropriated by the Senate Committee on Agriculture, Nutrition, and Forestry; this third installment reviewed the entire legislation as currently scored.  These initial reviews will be updated and supplemented by new information as it becomes available and with additional analysis or perspectives.