The Producer Price Index (PPI) and Consumer Price Index (CPI) used in this article are compiled by the US Bureau of Labor Statistics (BLS).  PPI is a family of indexes that measures prices received for domestic production by all industries in the goods-producing sectors of the US economy (mining, manufacturing, agriculture, fishing, and forestry) as well as output by the natural gas, electricity, and construction industries.  Prices are from the seller’s perspective.  The analysis period is 1953 to 2022.  Starting with 1953 allows time for post-World War II adjustments in the US economy.  Annual data are used.  For 2022, a simple average of the data released so far is used. 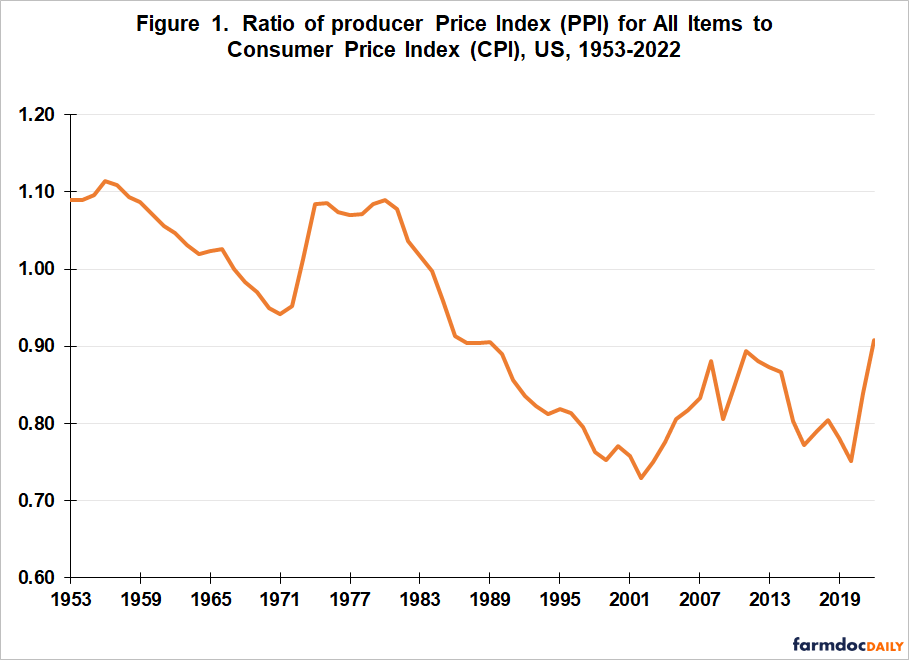 Relative role of various PPI sectors in the high inflation of 1973-1982 is examined by computing the ratio of PPI for a sector for a year to the PPI for all sectors in the same year.  The sectors examined, with their relative weight in the December 2021 PPI in parenthesis, are fuels and related products and power (20.4%); farm products, processed foods and feeds (16.7%); metals and metal products (12.1%); chemical and allied products (11.8%); machinery and equipment (11.7%); and transportation equipment (10.0%).  Together these 6 sectors account for 82.7% of the all sector PPI index.  The period examined, 1953-1985, pre-dates and includes the high inflation period of 1973-1982.  Note that data for the PPI transportation equipment sector is not available until 1969.

The well-known, central role of the fuels PPI sector in the high inflation of 1973-1982 is clearly evident in Figure 2.  Ratio of the fuel sector PPI index to the all sector PPI index jumped 31% in 1974 vs. 1973 as Middle East oil producers embargoed oil exports.  By 1981, this ratio was 138% higher than in 1972.  Initial importance of the farm products, processed foods and feeds sector is also clearly evident.  But, unlike the fuels PPI sector, the agricultural PPI sector price ratio declined after its rise in 1973.  Contribution of the four other PPI sectors to US inflation was similar to each other and the average of all producer prices over most of the analysis period, including 1973-1982. 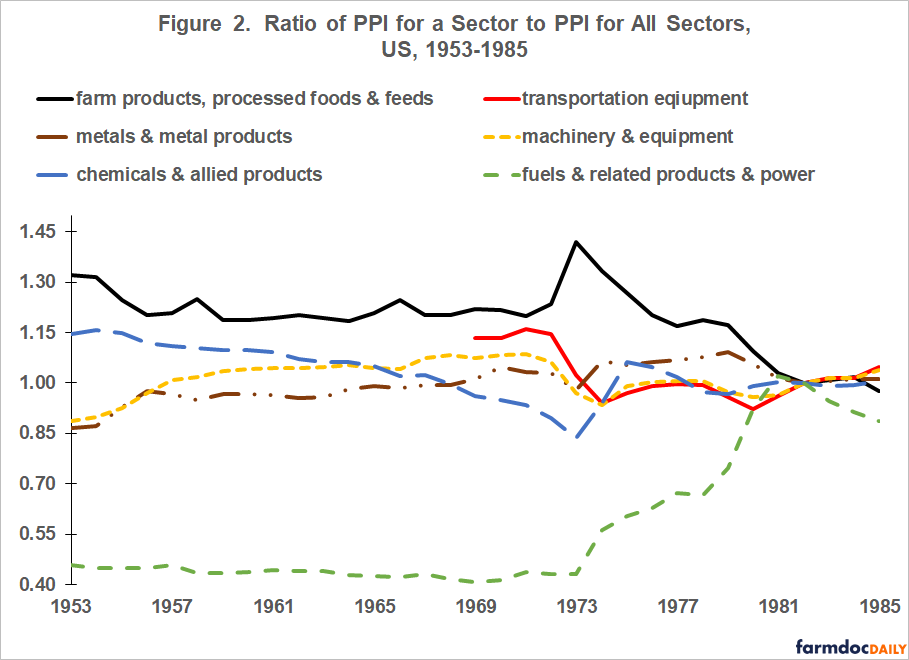 Like 1973-1982, prices of fuel and power have increased more than the other PPI sectors, between 2019 and 2022.  Annual average price index of fuel and power has risen 63% while the PPI all sector index has risen 33%.  From a longer term perspective, fuel and power price index relative to the PPI all sector price index is now near the top of its range since 2008, but has not exceeded this range yet (see Figure 3).  The other producer sector with higher than PPI all sector inflation is metals and metal products.  Its average annual price has risen 49% since 2019.  This sector includes iron and steel, nonferrous metals, and fabricated and structural metal products.  While prices of the chemical and allied product sector prices have increased notably since 1990 relative to the PPI all sector index, its ratio has not increase since 2019.  Among Its products are industrial and agricultural chemicals as well as drugs and pharmaceuticals.  On the other hand, prices of the machinery and equipment sector and the transportation equipment sector have dampened overall producer price inflation since 2000 and as well as since 2019.  Among the former sector’s products are machines and equipment used to produce other goods, and electrical machinery and equipment; while the latter sector’s products include cars, trucks, buses, trains, planes, and ships. 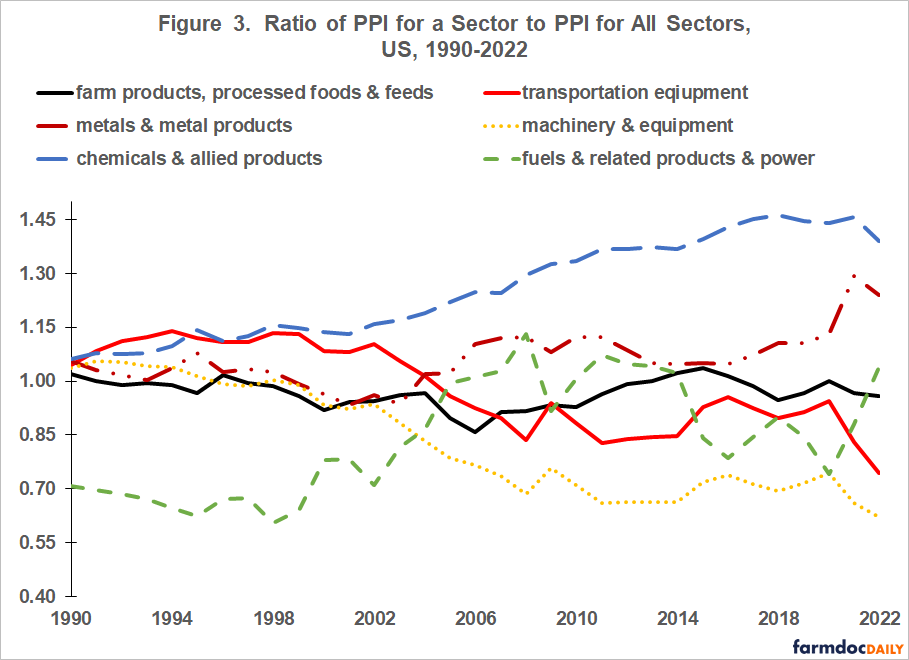 The metal and metal products sector is also contributing to current inflation.

Echoing the conclusion in the January 11, 2022 farmdoc daily that examined labor’s role in current inflation; higher interest rates (i.e. Federal Reserve policy) is only part of the solution.  Government policies and regulations need a comprehensive scrubbing with an eye toward reducing their inflationary impact, especially for sectors that currently have higher than average price inflation.  For example, how much of the relative increase in metal and metal product sector prices since 2019 is due to the tariffs the US has imposed on steel and aluminum imports?  And, will the provisions in the Inflation Reduction Act of 2022 designed to lower prescription drug prices have their intended impact?