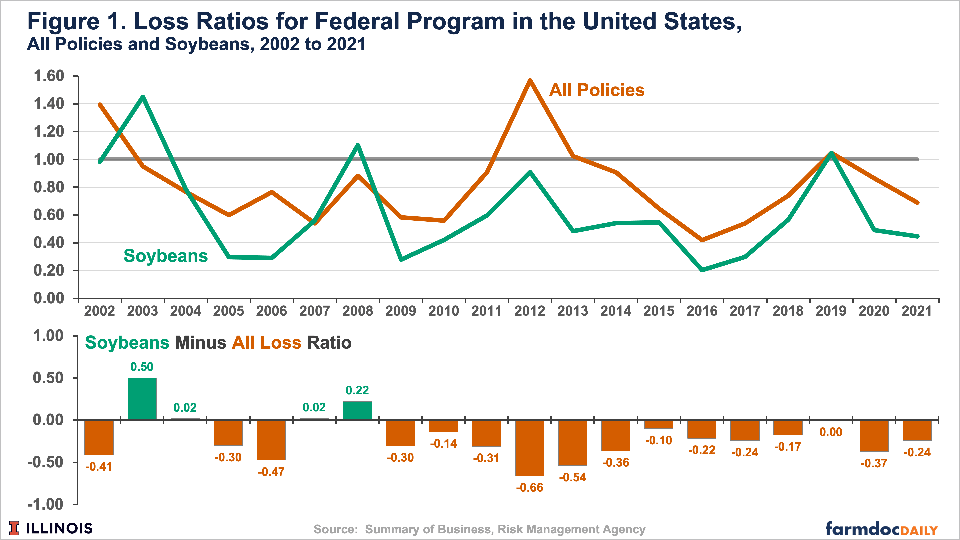 Overall, the soybean loss ratio is consistently below the loss ratio for all policies in the U.S. 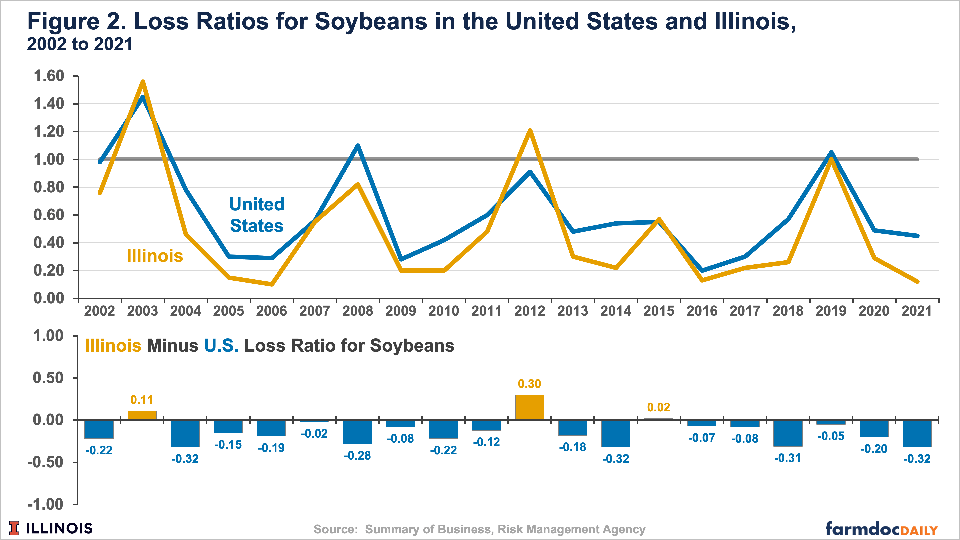 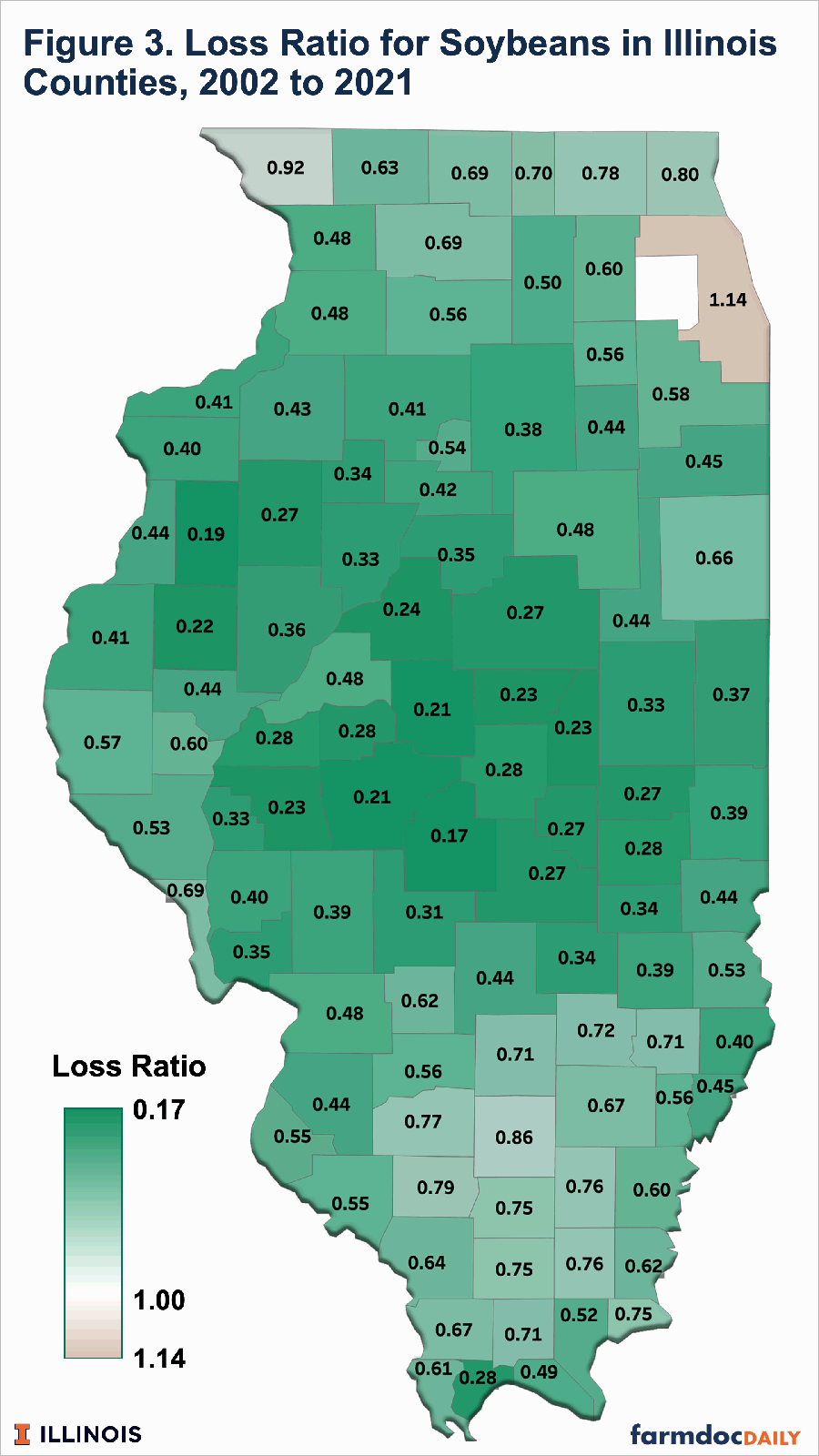 Low loss ratios over time indicate that premiums are too high relative to payments. Farmers do not pay all the premiums associated with the total premiums as the Federal government provides premium support. Even given this premium support, farmers in some counties have paid more into crop insurance than have been received in indemnity payments over time. For example, in Christian County — the county with the lowest soybean loss ratio in Illinois — farmers have, on average, paid $5.32 per acre more in premiums than have been received in payments in each year from 2002 to 2021.

It seems extremely risky to eliminate crop insurance on soybeans. Costs have increased greatly, and there is the risk of downside price movements. Well over 90% of the acres in Illinois are insured using Revenue Protection (RP), and most farmers use relatively high coverage levels (see farmdoc daily, November 17, 2020 and January 25, 2022). In northern and central Illinois, most farmers purchase crop insurance at the 80 and 85% coverage levels, while southern Illinois farmers typically use 75% and 80% coverage levels. Below we offer and discuss two insurance strategies to consider. 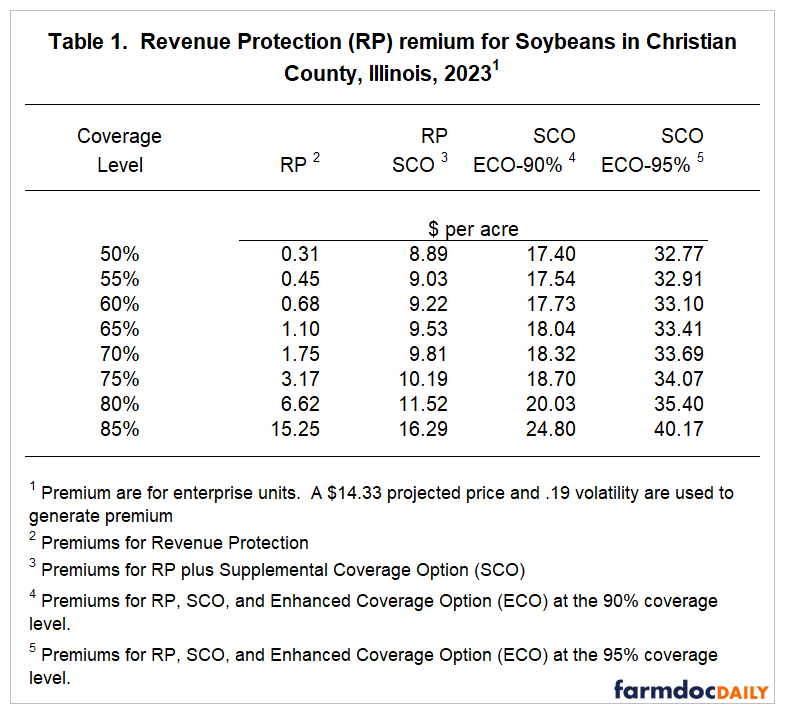 A farmer could also add the Supplemental Coverage Option (SCO) to their lower individual coverage level (see farmdoc daily, February 27, 2014). SCO provides county coverage from 86% to the level of the underlying RP product. For an 80% RP product, SCO provides coverage from 86% to 80%. SCO coverage uses county yields, and county yields may not match farm yields, presenting cases in which a farm-level product would pay and SCO would not, and vice versa. An 80% RP plus an SCO product has an $11.52 total premium, still below the $15.25 premium for 85% RP. Further reductions in the RP coverage level reduce the premium on the combined RP and SCO product (see Table 1).

More detail on strategies using RP, SCO, and ECO is provided in the March 2, 2021, farmdoc daily.

Use RP with the Harvest Price Exclusion 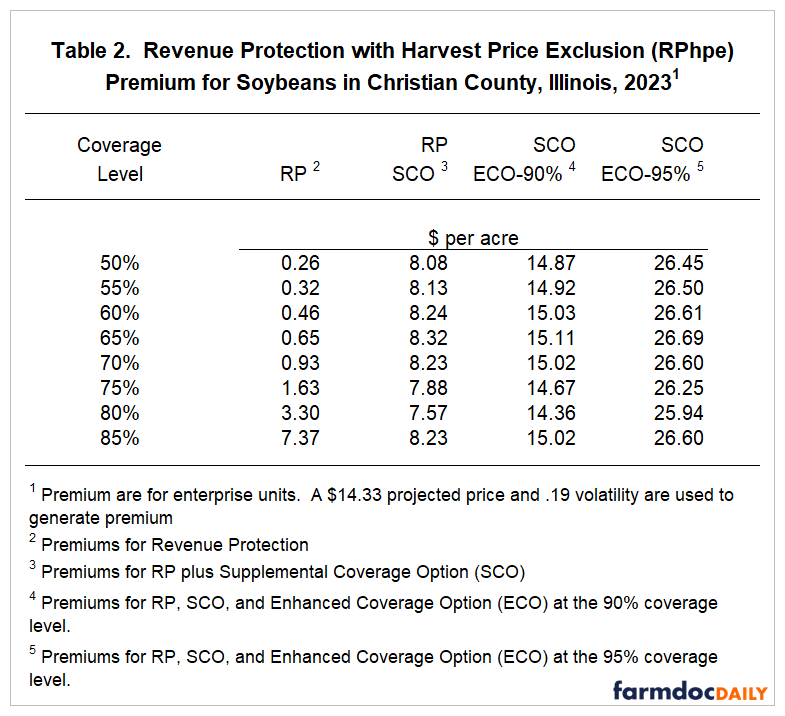 RPhpe 85% has a $7.37 premium, half the premium for RP 85%. Farmers could add SCO and ECO-90% and have a combined premium of $15.02, still less than the RP 85% coverage level. The use of RPhpe plus ECO would benefit those farmers more concerned with price declines as the SCO and ECO would increase the coverage level, although using a county-based coverage band from 90% down to the individual plan’s coverage level.

Loss ratios for soybeans are lower than other Federal policies, and loss ratios are particularly low in northern and central Illinois. In an effort to reduce premiums while maintaining some safety net, some farmers may lower coverage levels on RP and make up some of the difference with SCO. Doing so will trade farm yield coverage for county coverage.  If a farm’s yields are low, reducing coverage level may result in lower or no crop insurance payment. The use of RPhpe rather than RP also will lower the premium substantially. Using RPhpe gives up the guarantee increase which is included in RP.  The guarantee increase is most useful in drought years like 2012. Any strategy to reduce insurance premium costs has tradeoffs that should be considered.