This article examines US consumer price inflation and unit cost of labor since 1952.  Labor has drawn increasing attention as a factor in the current high US inflation rate.  During the last half of the 20th Century, unit cost of labor notably dampened US price inflation.  Labor ceased being a dampening factor around 2010.  A potentially smaller US labor force over the next 15 years, reinforced by other changes in the US labor market, suggests high inflation may extend well into the future.

The Consumer Price Index (CPI) used in this article is for all urban consumers.  It is computed by the US Bureau of Labor Statistics (BLS).  BLS also computes the unit cost of labor index used in this article.  Unit labor cost measures changes in wages and other remuneration earned by labor adjusted for changes in labor productivity, specifically output per hour of work.  The analysis period is the 60 years from 1953 to 2022.  Starting with 1953 allows time for post-World War II adjustments in the US economy.  For 2022, a simple average of the data released so far is used. 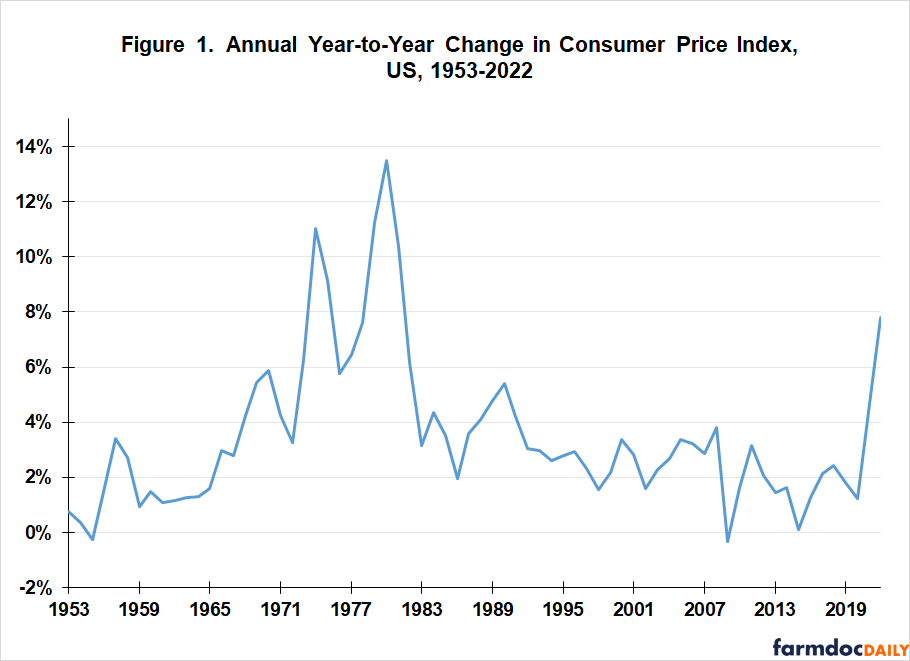 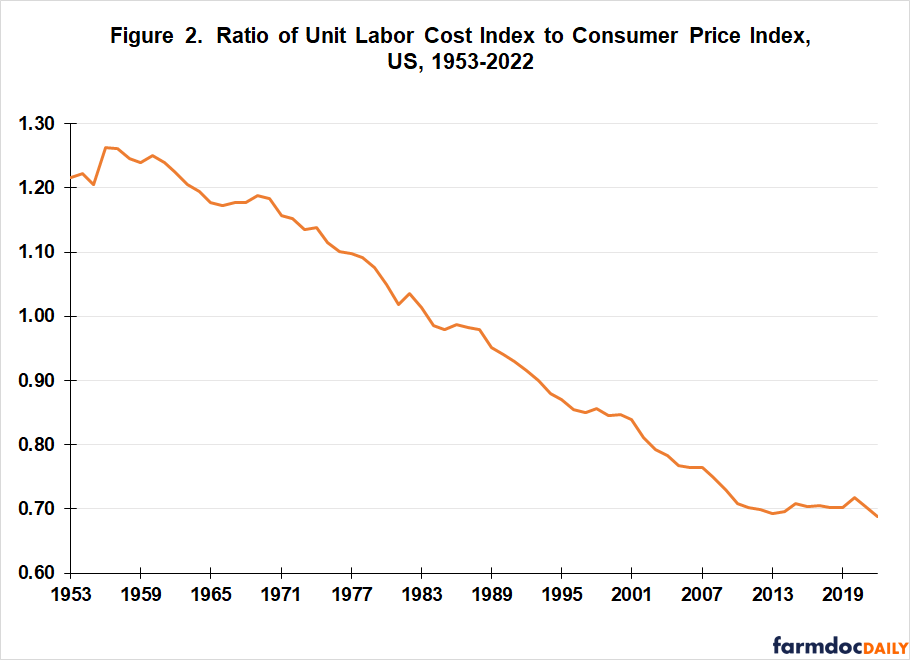 To further explore the relationship between CPI and unit labor cost, the following equation was estimated using regression analysis:

Payments to (i.e. cost of) labor reflect the demand and supply for labor.  The US civilian labor force is defined as the civilian non-institutional population, age 16 or older, who are employed or are not employed but seeking employment (BLS, 2023).  It includes citizens of foreign countries who reside in the US and do not live on the premises of an embassy.  It does not include active duty members of the US Armed Forces and people confined to, or living in, institutions / facilities such as prisons, detention centers, skilled nursing homes, and other residential care facilities.  The labor force participation rate is the share of the population that is either working or actively looking for work.  It is calculated as (number of people in the labor force) divided by (civilian non-institutional population) (BLS, 2023).

The US civilian non-institutional population increased at an increasingly faster rate until the mid-1970s.  Its 5-year average rate was 2.2% in the mid-1970s compared with only 0.5% in the early 1950s (see Figure 3).  Moreover, in the early 1960s labor force participation also started to increase, in part due to the large baby boomer generation reaching age 16.  Five-year averages are used to dampen year-to-year variability, especially in the rate of change of the civilian non-institutional population. 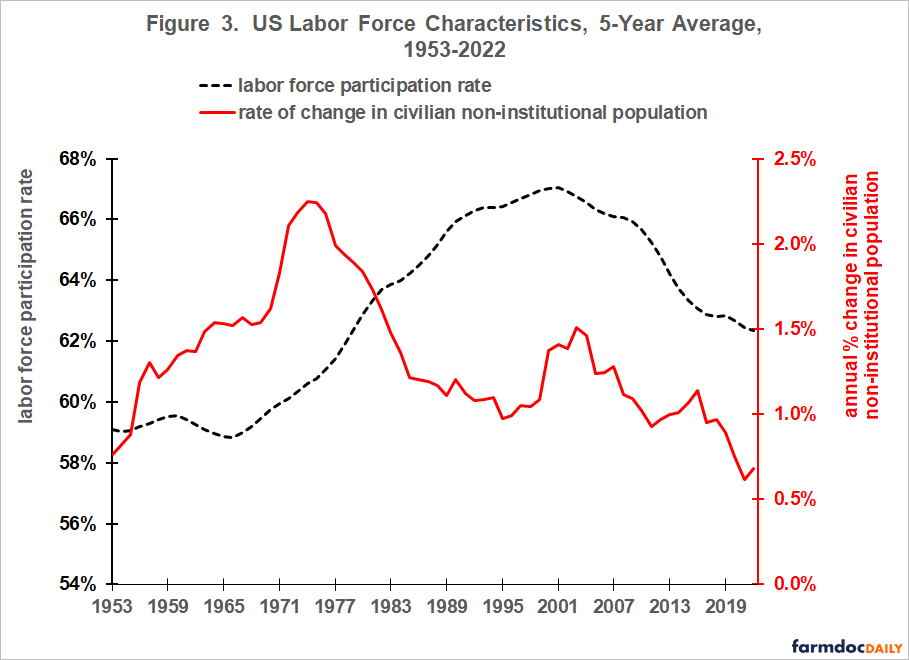 Since the mid-1970s, rate of increase in the US civilian non-institutional population has progressively slowed, averaging 0.7% over the last 5 years (2018-2022).  The smaller increase initially reflected the smaller age cohorts following the baby boomers.  Since 2000 labor force participation has also fallen.  Its decline has been especially pronounced since 2010:  from 66% in 2010 to 62% in 2022. 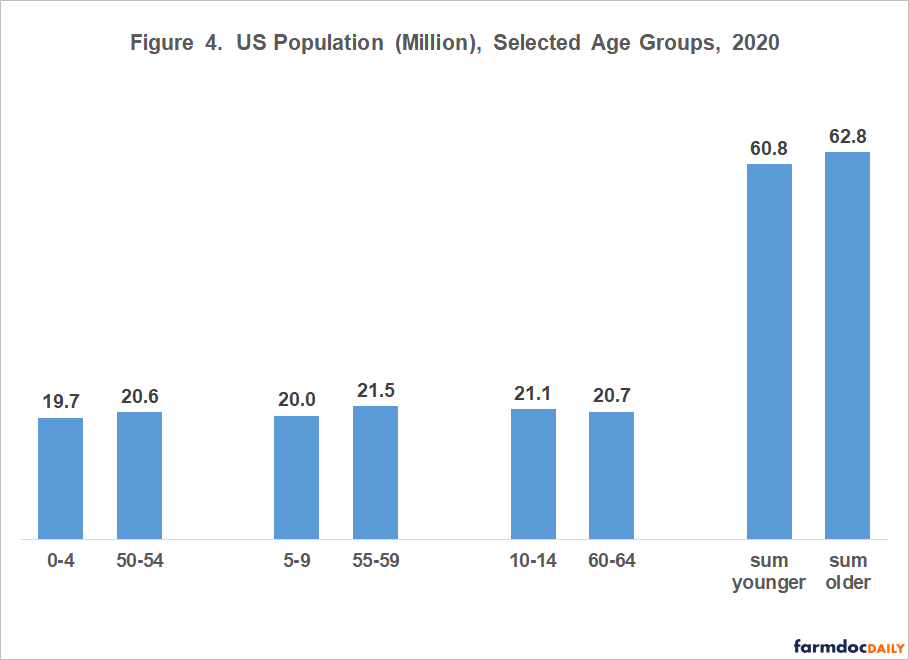 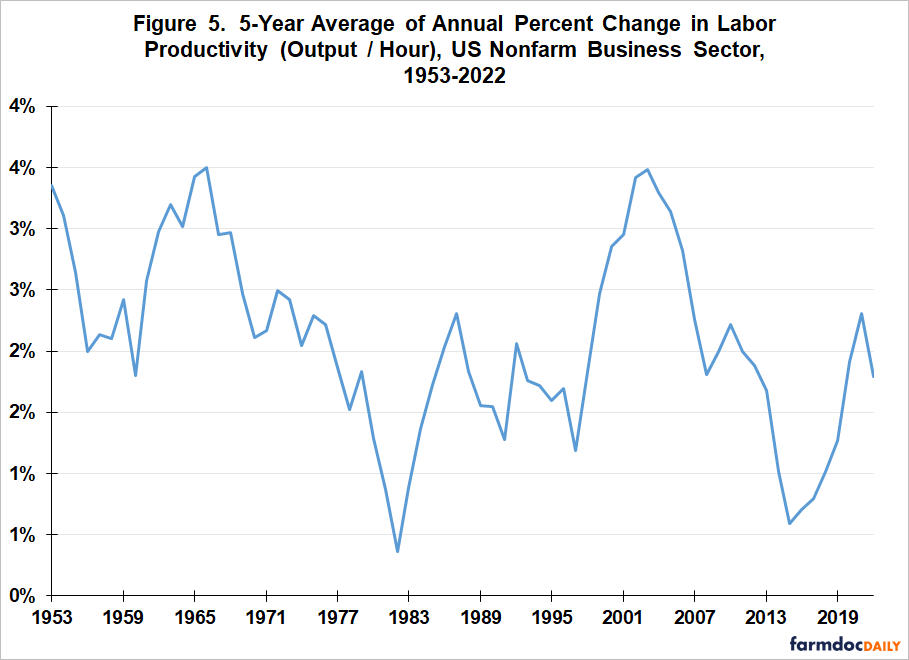 Distinct periods of US consumer price inflation have existed since 1950.  In other words, high inflation is unlikely to be a one year phenomenon, but is likely to extend over several years.

After adjusting for changes in labor productivity, labor cost notably dampened US price inflation during the last half of the 20th Century.  However, since 2010, the cost of labor has not dampened US inflation.

Assuming the US decides to continue to restrict immigration, the US labor force may start to decline in the next 10-15 years as more individuals exit than enter the US labor force.  A declining supply of labor will put upward pressure on labor remunerations and thus unit labor cost.

Also suggesting higher labor cost are US businesses’ current desires to reduce exposure to foreign supply chains risks and to rethink just-in-time production as well as the post-COVID lockdown desire of many US workers for greater work-time flexibility.

While inflationary periods are caused by the interplay of many factors, the current US labor market situation suggests higher labor cost and thus higher rates of inflation could last for an extended time.

It also suggests higher interest rates (i.e. Federal Reserve policy) is only part of the solution to current US price inflation.  In recent years, the US has sought to restrict immigration, invested little in labor productivity research, and not adjusted laws and regulations that discourage labor force participation, such as the tax penalty for people receiving Social Security income who return to work.  In short, the US will need to reconfigure its policies and budget priorities if it wants to address labor’s role in current US inflation.

US Bureau of Labor Statistics.  2022, December 30.  Databases, Tables, and Calculators by Subject.  https://www.bls.gov/cps/definitions.htm#geo

US Bureau of Labor Statistics.  2023, January 2.  Concepts and Definitions. https://www.bls.gov/cps/definitions.htm#geo

Zulauf, C. “Update on US Interest Rates and Inflation.” farmdoc daily (12):155, Department of Agricultural and Consumer Economics, University of Illinois at Urbana-Champaign, October 12, 2022.