There has been much discussion over the last year about problems in implementing the Renewable Fuels Standards (RFS) due to the expanding gap between the implied mandate for renewable biofuels (ethanol) and the E10 blend wall. Our previous posts on this issue can be found here, here, and here. In this post we update our previous analysis of EPA options for implementing the RFS for 2014 and 2015. The main focus is to highlight the constraints faced by the EPA as it considers potentially momentous decisions about the RFS rules for 2014 and 2015.

Prospects for an expanding gap between the mandate and the E10 blend wall have been reflected in sharply higher prices for Renewable Identification Numbers (RINs) beginning in January 2013. We have written several posts analyzing RINs prices, including those found here, here, and here. Our analysis shows that the pressure of meeting the RFS renewable (ethanol) mandate with a binding and steep E10 blendwall ultimately shows up in the price of biodiesel. This situation has resulted in numerous calls for changes in the RFS either through the administrative authority granted to the EPA by the RFS statutes or through legislative changes to the RFS statutes. To date, the only change to the RFS made by EPA has been to reduce the advance biofuels mandate for cellulosic biofuel. Those mandates have been reduced due to lack of production capability. In 2013, for example, EPA established the mandate at 6 million gallons compared to the RFS of one billion gallons. While the cellulosic mandate has been reduced, the mandate for total advanced and total biofuels has not been reduced, even though EPA has authority to do so. Congressional committees have held hearings on the RFS, but we do not expect legislative changes any time soon.

In its recent final rule making for 2013, the EPA indicated that the 2014 proposed rule to be released later this year would include a proposal to adjust the 2014 volume requirements, including both the advanced biofuel and total renewable fuel categories. A number of proposals are possible and each has advocates. Some argue that changes beyond another cellulosic write-down are not required because a combination of higher blends of ethanol (E15, E85) and larger volumes of biodiesel will successfully meet existing mandates for 2014 and beyond. Others argue that the advanced and total biofuels mandate should be reduced by an amount equivalent to the cellulosic write-down. Still others argue that both the advanced and renewable mandates should be reduced for 2014 and beyond (see our “Freeze It” proposal here for one example). The EPA will consider a large number of factors, including biofuels production, distribution, and consumption capacities as well as the scope of its authority, in determining proposed changes for 2014 and there will be opportunity for public comment on the proposal.

We examine here the three main alternatives that the EPA can choose from for implementing the RFS in 2014 and 2015:

We now consider two different pathways to filling the gap between the implied renewable fuels mandate and the E10 blend wall under each of the three alternatives shown in Table 1. One pathway assumes that much of the gap is filled with renewable biodiesel and the second assumes more of the gap is filled with E85. In our previous work we assumed that the gap would be largely filled by biodiesel due to logistical and infrastructure limitations to increasing E85 use. We include the E85 compliance scenarios here for a full treatment of possible scenarios and due to recent analysis showing that market incentives may allow more rapid E85 expansion during the next two years (see analysis here, here, and here). These two pathways are chosen to illustrate the range of possible compliance scenarios. In actuality, there are multiple combinations of biodiesel and E85 that could fill the gap between the renewable mandate and the E10 blend wall. 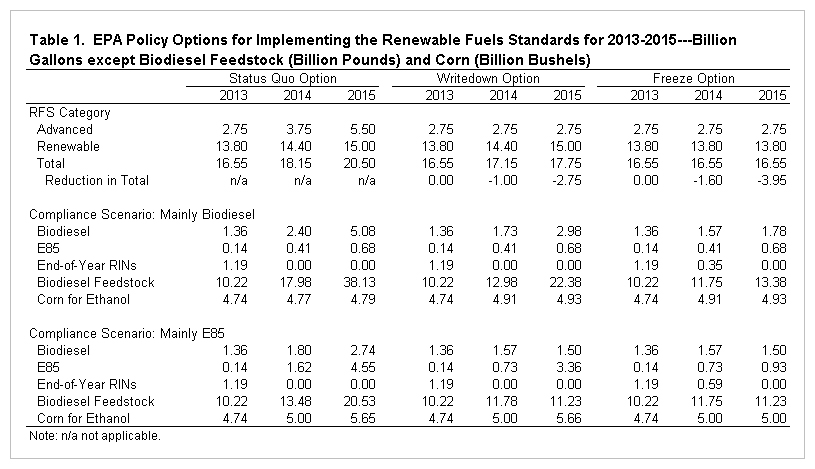 A complete set of spreadsheets that show all the assumptions, calculations, and outcomes for the six compliance scenarios described above and graphs comparing outcomes can be found here. The outcomes include the quantities of biofuels consumption by category, the year-ending stock of RINs, and the quantities of feed stocks required for the production of ethanol and biodiesel. The value for key variables under each of the compliance options is found in the bottom two panels of Table 1.

Implementation of the status quo option has the following implications:

Implementation of the writedown option has the following implications:

Implementation of the freeze option has the following implications:

The EPA appeared to send strong signals in their recent 2013 RFS rulemaking that the agency will implement some sort of writedown of RFS volumes starting in 2014. If this is true, then the status quo option is off the table and compliance in 2014 becomes feasible under either the writedown or freeze options because of the very large stock of RINs that have been built up. The real fireworks start in 2015 when the stock of RINs is presumably exhausted. If EPA’s statutory authority is limited to writing down the total RFS by the amount that the cellulosic mandate is written down, then compliance may become problematic in 2015 because the required quantities of biodiesel and/or E85 in 2015 may exceed the capacity to produce or distribute those fuels. The only way to assure that compliance is not likely to be problematic in 2015 is under the freeze option, and even this option can require nearly a billion gallons of E85 use. However, it is not clear whether the EPA has the authority to implement this option since it requires writing down the (implied) renewable mandate to 13.8 billion gallons in 2014 and 2015. It is probably no accident that discussion of this issue has appeared in the press in recent weeks. Much will depend on how the EPA interprets its authority in this regard.