A series of recent farmdoc daily posts have examined supply responsiveness for biodiesel. The first post examined trends in biodiesel prices and production profits. The second post investigated the responsiveness of biodiesel supply to production profits. The third post estimated a supply curve for biodiesel. This seemingly arcane topic is important because the responsiveness of biodiesel supply to profits plays a key role in determining the price of D4 biodiesel RINs, and in some circumstances, D6 ethanol RINs (see the posts here and here for detailed explanations). The purpose of today’s post is to use the estimated supply curve for biodiesel and an assumed demand curve to better understand the pricing of biodiesel RINs.

I begin by reviewing the conceptual model of biodiesel RINs pricing presented in two earlier posts (here and here). The model in Figure 1 assumes that biodiesel demand is perfectly elastic (horizontal) for biodiesel prices equal to (ultra low sulfur) diesel prices. This reflects an assumption that biodiesel and diesel are perfect substitutes and that biodiesel is a small enough part of the diesel market that changes in the biodiesel price do not impact the overall demand for diesel fuel. One could go further and adjust biodiesel prices to reflect the lower energy content of biodiesel (about 12% lower) compared to petroleum diesel. However, given the low biodiesel blends typically used in the marketplace today, it is doubtful that this lower energy content is priced at the retail level. So, we assume no adjustment is necessary. In the earlier posts, it was also assumed that demand becomes perfectly inelastic (vertical) at an assumed B5 blendwall of 2 billion gallons. This technical limitation was highlighted in the EPA’s RFS rulemaking for 2013 (see p. 49815). This turns out to be a quite controversial assumption and has been challenged vigorously by the biodiesel industry. It seems prudent to drop this assumption while awaiting further analysis. Lastly, the model also now accounts for the biodiesel blenders credit that is in place for 2013. The policy effectively shifts the biodiesel demand curve up by the amount of the credit, which is $1 per gallon. At any given quantity of biodiesel, the effective selling price for biodiesel is increased by the amount of the credit. 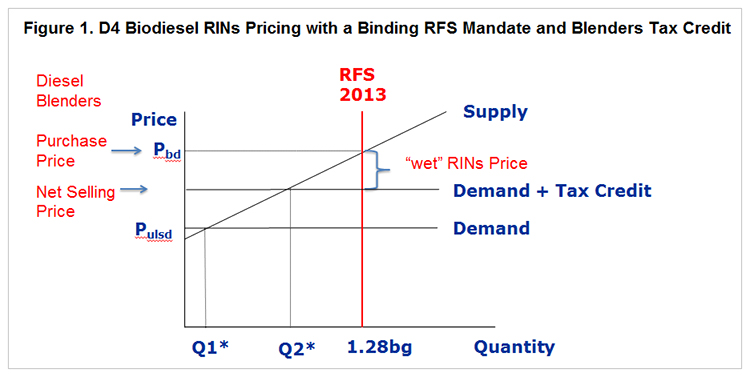 The model in Figure 1 implies that the 2013 RFS mandate of 1.28 billion gallons is binding even after consideration of the blenders tax credit. That is, the mandated quantity exceeds the small amount of biodiesel that would be produced in the U.S. absent the RFS mandate and no tax credit (Q1), as well as the larger amount of biodiesel that would be produced absent the RFS mandate but with a tax credit in place (Q2). In order to get the higher than equilibrium quantity produced in the first scenario, biodiesel producers must be paid a price that is higher (Pbd) than the breakeven diesel price (Pulsd). From the perspective of a diesel blender, there is a wedge between the price paid to biodiesel producers and the price charged to consumers for the biodiesel in diesel blends. This wedge, or loss, is the diesel price minus the biodiesel price at the mandated quantity. The wedge also equals the “wet” price of a D4 biodiesel RIN. This terminology is used because a gallon of wet biodiesel generates 1.5 ethanol equivalent RINs. In the second scenario, the upward shift in the demand curve due to the blenders tax credit ends up reducing the wet RINs price by exactly the amount of the tax credit. The mandate is still binding at 1.28 billion gallons, but blender losses are reduced by the amount of the tax credit, and hence, the lower RINs price.

Figure 1 highlights the key variables that determine the price of a D4 biodiesel RIN. The D4 price will vary directly with the steepness (slope) and position (intercept) of the biodiesel supply curve. For example, a parallel downward shift in the supply curve will reduce the RINs price accordingly. The market price of diesel shifts the demand curve up and down, and all else constant, will change the RINs price. For example, if the price of diesel declines this will shift the demand curve down and the price of RINs will increase. The blenders tax credit shifts the demand curve upward and the level of the RFS mandate determines the points of intersection with the supply and demand curves.

As noted in this previous post, the model in Figure 1 actually predicts the “intrinsic” value of biodiesel RINs. In options market parlance, this refers to the immediate value of exercising an option. This is equivalent to the loss blenders incur today by blending biodiesel, and it is represented by the blending margin. There is a second component of option value that is also relevant. This value is called “extrinsic,” or “time,” value and it reflects the value to an option owner of waiting until later to exercise the option when the intrinsic value may be even higher than it is today. Using the options analogy we can think of a RINs price as consisting of two components:

I argued in the earlier post that time value had largely been irrelevant in the past since biodiesel prices tended to be much higher than diesel prices, even after adjusting for the blenders’ tax credit, so the RIN can be considered “deep-in-the-money.” Options of this type tend to have small time values.

With this background, the first step in the empirical analysis is to check how closely D4 biodiesel RINs prices track blending margins net of the blenders tax credit (when it is in place). The options pricing equation above implies that a D4 RINs should trade for a price no lower than its intrinsic value, which equals the current blending margin for biodiesel. Figure 2 is an updated version of a figure presented in two earlier posts (here and here). It shows the biodiesel blending margin at the wholesale level in Chicago and the D4 RINs price from September 3, 2009 through October 24, 2013. The biodiesel blending margin is normally computed as the price of ultra-low sulfur diesel minus the price of biodiesel plus the $1 biodiesel blenders’ tax credit when it is in effect. Here, the margin is multiplied by -1 to facilitate comparison to the market price of D4 RINs. 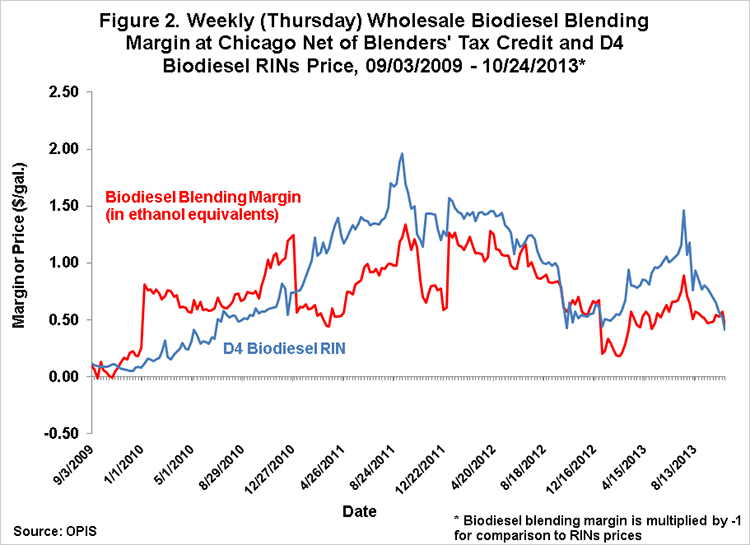 As noted above, for most of 2013, the biodiesel blending margin has been well below the D4 price, consistent with a positive time value for the RINs “option.” Movements in recent weeks are quite puzzling, since the blending margin now basically equals the D4 price and the blenders tax credit is already in place. This implies that the time value component has essentially been driven to zero, which is highly unusual. The only other comparable period is October 2011. The low time values then did not persist too long and it is reasonable to have the same expectation for movements in D4 RINs values in the near future.

Up to this point, we have established that D4 RINs prices generally track intrinsic values given by current blending margins and at times have had substantial time values. A particularly interesting dimension to RINs pricing right now is the existence of low time values when there is also considerable uncertainty about the levels of key variables in the future. The time value of a RIN reflects the possibility that intrinsic value (blending margins) will be even larger at some point in the future. In other words, if I am a trader I may be willing to pay more for a RIN than its current intrinsic value because blending margins may be even larger (bigger loss) at some point in the future. The level of RFS mandates for 2014 represents one of the main sources of uncertainty in this regard. 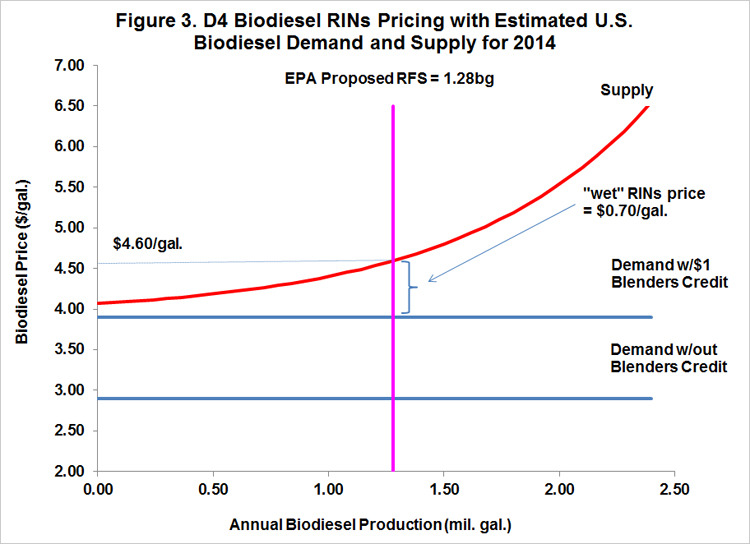 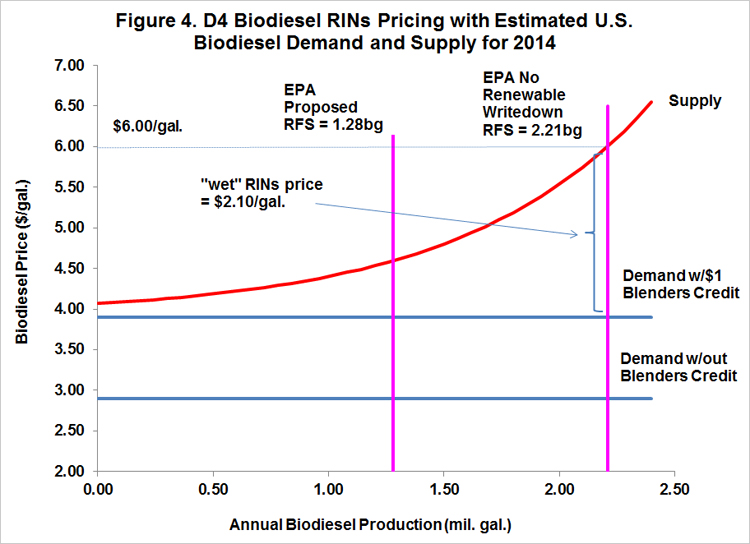 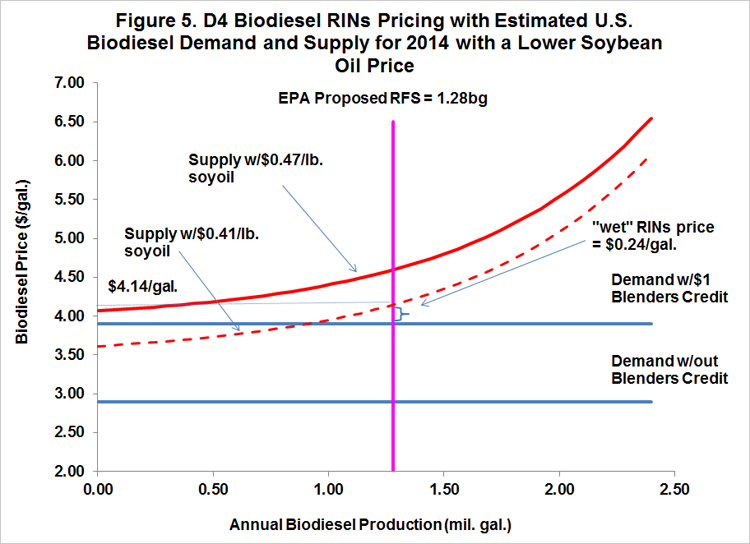 From a conceptual standpoint, RINs prices can be thought of as consisting of two components – intrinsic and time value. The intrinsic value should track current blending margins, and it was shown that this is generally true for D4 biodiesel RINS. The time value of RINs reflects the chance that blending margins will be even larger (bigger losses) in the future and it has typically represented about one-third of RINs prices. A particularly interesting dimension to RINs pricing right now is that time values have been driven basically to zero, precisely when there is great uncertainty about the outcome of EPA rulemaking and the status of the blenders tax credit. Variation in soybean oil prices adds to the uncertainty. Estimated supply and demand curves can be used to generate plausible D4 biodiesel RINs values for 2014 anywhere from $0.16 to $2.07 per gallon (in ethanol equivalents). This illustrates the tough job facing the RINs market in evaluating the probabilities of the high vs. low blending margin scenarios, which is central to determining the time value of a RIN. With D4 prices in recent days trading as low as $0.27 per gallon, it appears that the RINs market is almost completely discounting the chance that any of the high price scenarios will occur in 2014. This does not appear to be a sustainable outcome.

October 25, 2013 Note: This post has been modified from the original version published on October 24, 2013. The spreadsheet formula for computing the blending margin in Figure 2 omitted the conversion to ethanol equivalents. A corrected version of Figure 2 is now shown. The text has been altered where relevant to reflect this change.