Several farmdoc daily posts in 2013 have examined the efficiency of price discovery in the secondary market for RINs (here, here, and here). These tradable credits are used to comply with volumetric biofuels mandates under the Renewable Fuels Standard (RFS). Questions about price discovery in the RINs markets have mainly arisen due to the spectacular rise in prices through mid-2013 (Figure 1). Previous posts demonstrate that: i) the price of D6 ethanol RINs rose to a level that makes economic sense once one carefully works out the implications of the E10 blendwall and increased RFS mandates for the market equilibrium in ethanol; ii) pressure from a binding blendwall and increasing renewable (ethanol) mandate ultimately shows up in the price of biodiesel, and iii) the RINs market anticipates even political outcomes with surprising accuracy. There did not appear to be anything in the data that indicated obvious and glaring problems with price discovery in the RINs market. 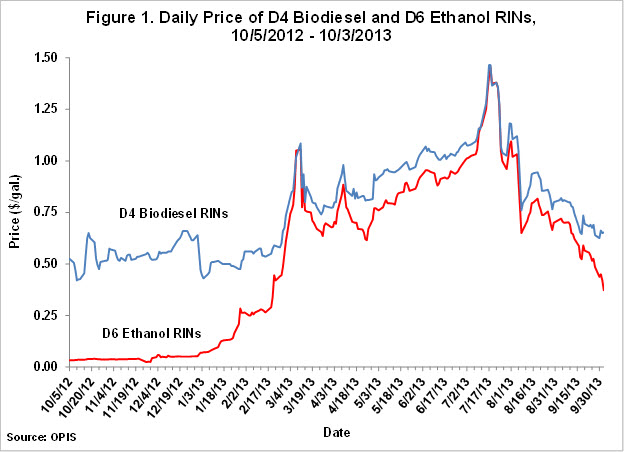 While the upward spike in RINs prices during 2013 has garnered nearly all of the attention, there has been an equally spectacular plunge in values since mid-July (Figure 1). Since peaking at $1.47 per gallon on July 18, D4 biodiesel RINs prices dropped to $0.65 on October 3, a decline of over $0.80. Over the same time frame, the price of D6 ethanol RINs declined from a peak of $1.46 per gallon to $0.37, a drop of over a $1.00. These price movements potentially raise new questions about price discovery, but the focus is on the downward slide rather than the upward spike. In addition, the price movements imply large changes in the total value of RINs stocks. Using the mid-point of 2013 RINs stocks estimates in this farmdoc daily post by Nick Paulson and Seth Meyer, the approximate total market value of the stock of RINs at the peak of prices in mid-July was about $3.2 billion. Market prices in early October indicate this value had fallen to just under $1 billion, for a total loss in value of over $2 billion in under three months. This is a sizable capital loss by any standard and it underscores the importance of understanding why RINs prices declined so suddenly.

One possible explanation for the plunge is that biodiesel prices went high enough that by mid-summer more than enough D4 RINs were being produced for RFS compliance in 2013 and future years (see the post here). Biodiesel prices have indeed fallen by about $0.75 per gallon since July, which translates into similar declines in biodiesel blending losses and D4 RINs prices (see posts here and here). There are two problems, however, with this explanation. First, it is far from obvious that the relatively brief run-up in biodiesel prices and production generated sufficient RINs for future compliance given the range of options for EPA implementation of the RFS mandates in 2014 and beyond. For example, what we called the “Writedown Option” for RFS rules in 2014 and 2015 in a recent post would clearly require a sustained period of elevated RINs prices. While there is considerable uncertainty about the level of RINs prices that would be required under this scenario due the difficulty of forecasting a host of variables, including the cost and timing of expanded E85 deployment and the impact of rising biodiesel prices on vegetable oil prices, it seems reasonable to argue that D6 RINs prices would be higher than recent market prices. Second, even if it were true that enough D4 RINs had been generated for compliance, the price of D4 and D6 RINS should be approximately the same because the amount of the renewable (ethanol) mandate above the E10 blendwall effectively becomes an additional biodiesel mandate (see this post). Figure 1 clearly reveals that D4 and D6 prices started to diverge in early August. A whopping $0.28 per gallon gap has opened up in the prices for these two RINs categories as of early October.

An alternative explanation for the plunge in RINs prices is that traders are anticipating a significant change in EPA policy with regard to the implementation of the RFS mandates. As noted above, these policy choices were outlined in our recent farmdoc daily post “Decision Time for the RFS?” We argued in this post that the only way for RFS compliance not to be problematic by 2015 was to implement a “Freeze Option,” where mandates for 2014 and 2015 are frozen at 2013 levels. We also noted that it was not clear whether the EPA had the authority to implement this option since it requires writing down the renewable mandate to 13.8 billion gallons in 2014 and 2015. Regardless, declining biodiesel prices, the overall drop in RINs prices, and the de-linking of D4 and D6 RINs prices are all consistent with an increasing market expectation that the EPA will adopt some form of a freeze policy despite questions about EPA authority to write down the renewable mandate. It is also interesting to note how well recent market news reports line up with this conclusion. For example, the OPIS biofuels news service reported on July 24:

“There is lots of testimony on Capitol Hill this week on the subject of RINs, with various stakeholders reaffirming their positions on the controversial credits. A call for a repeal of the RFS by some lawmakers isn’t regarded as a movement with any traction, but the noisy week has inspired buzz that EPA might act sooner rather than later and perhaps restate mandatory levels for blending that are part of the RFS.”

The next day, on July 25, OPIS reported:

“Prices for D6 2013 ethanol RINS are in a freefall this morning, on chatter coming from Washington caucuses and hearing rooms, as well as on a sense that some major holders of RINs are liquidating some holdings. OPIS just confirmed that 2013 vintage D6 RINs moved in the last 15 minutes for just 90cts, after opening at $1.05 and plunging in 5ct increments in a clear sellers’ panic. There is no word on the scale of volumes, but those holding RINs are frightened that some sort of remedy might be coming from the Environmental Protection Agency.”

Only a few days later, on August 6, OPIS noted that:

“It is a wild Tuesday morning in the paper markets for RINs – – Renewable Identification Numbers – – as well as most grades of gasoline. Reports from Washington indicate that there could be a forthcoming action from the Environmental Protection Agency, perhaps as early as today, that might grant some relief from targets on blending.”

“Prices for 2013 D6 ethanol RINs have moved to multi-month lows this morning, with some sellers liquidating their holdings on fears that EPA could cut some blending thresholds. Various scenarios heard among refiners and their “well-connected” advisors in Washington talk about a number of possible scenarios. One consultancy has reportedly suggested that the 2014 requirement for corn ethanol blending might be reduced by 1 billion gallons. But other scenarios talk of no change in the ethanol blending, a slight increase in advanced bio requirements and an overall reduction in the total RFS requirement.”

The level of RINs prices and the relationship of prices for different categories of RINs indicate that RINs traders expect the EPA to adopt some form of a freeze in RFS mandates for 2014. If the EPA does move in this direction for 2014 mandate rules, this will be another example of the impressive ability of RINs traders to anticipate policy and political outcomes. It could also raise some troubling questions about leaks of internal EPA policy deliberations in advance of public announcements.