A farmdoc daily article (October 10, 2014) last week examined the drivers of D4 biodiesel RINs prices. It is important to understand these drivers since the level of D4 prices drives the level of D6 ethanol RINs prices when the renewable (ethanol) mandate exceeds the E10 blend wall. The analysis highlighted the key role of three factors in driving D4 prices: i) soybean oil prices; ii) diesel prices; and ii) the $1 per gallon blenders tax credit. The purpose of today’s article is to project the price for 2014 D4 biodiesel RINs under various policy alternatives assuming specific values for these key drivers. These projections provide some perspective on the marginal cost of complying with the RFS depending on policy outcomes.

The starting point for the analysis is the ethanol market because the “renewable gap” plays a key role in pricing both D6 ethanol and D4 biodiesel RINs under certain scenarios. The conceptual model of the ethanol market presented in Figure 1 is the same model that has been used in several previous farmdoc daily articles on RINs pricing (for example, July 19, 2013, August 8, 2014). The demand curve is assumed to be vertical (perfectly inelastic) at 5 billion gallons in order to represent the demand for ethanol as an MTBE oxygenate replacement. It is vertical since non-ethanol alternatives are prohibitively expensive. The demand curve then becomes flat (perfectly elastic) for ethanol prices equal to 110 percent of CBOB gasoline prices between 5 and 13 billion gallons. This breakeven point reflects Department of Energy research on the value of ethanol as an octane enhancer in gasoline blends. The demand curve becomes vertical again to reflect the E10 blend wall, which is assumed here to be 13.5 billion gallons for 2014. The intersection of market supply and demand in this case results in an equilibrium quantity of 13.5 billion gallons, equal to the E10 blend wall. This represents a 500 million gallon increase in the blend wall estimate for 2014, reflecting updated estimates of gasoline consumption for 2014 (farmdoc daily October 6, 2014; EIA/STEO). Since it is profitable for gasoline blenders to blend ethanol with gasoline at least up to 10 percent blends, the model predicts that the price of an ethanol RINs is zero up to the E10 blend wall of 13.5 billion gallons. This also means that the EPA’s preliminary proposal of a 13 billion gallon renewable mandate for 2014 is actually non-binding since the market-determined quantity of ethanol is greater than the proposed mandate. It also means that: i) rolling back the write down of the renewable mandate in the final 2014 rulemaking to 13.5 billion gallons will have the same effect on RINs prices as the preliminary level of 13 billion gallons; and ii) rolling back the write down of the renewable mandate in the final 2014 rulemaking to 13.6 billion gallons, the most widely reported level in recent press accounts, is likely to have little effect on RINs prices given the large stock of RINs available in 2014 (farmdoc daily August 8, 2014). 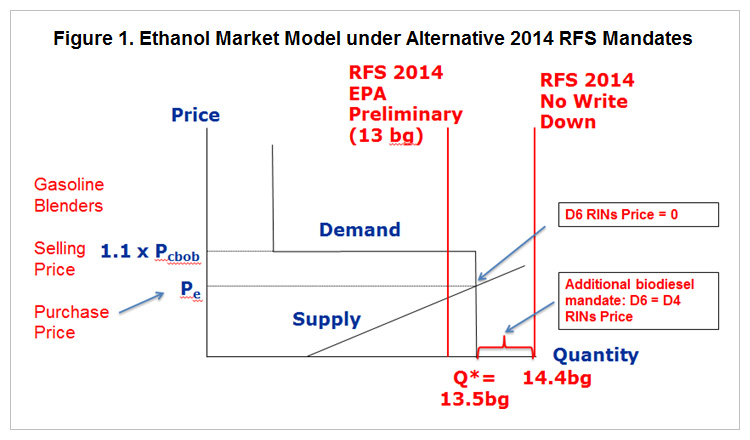 The pricing of RINs is entirely different in Figure 1 if the renewable mandate is set above the E10 blend wall. For example, the statutory mandate for 2014 is 14.4 billion gallons, which results in a “renewable gap” of 0.9 billion gallons (14.4 – 13.5). Assuming that higher ethanol blends, such as E85, cannot be deployed in a cost-effective manner in the short-run, then the renewable gap effectively becomes additional biodiesel mandate. In this model, the only way to fill the gap and fully comply with the renewable mandate is by blending biodiesel, which is a higher nested biofuel in terms of RFS compliance. In sum, as the size of the renewable gap grows so too does the total effective biodiesel mandate; which in turn can create substantial upward pressure on the biodiesel price, and all else equal, the D4 RINs price.

Figure 2 illustrates D4 RINs pricing for the first two policy scenarios where the tax credit is not reinstated. The underlying conceptual model is the same one that was used in last week’s article (October 10, 2014) to explore the key drivers of D4 biodiesel RINs prices. The supply curve is the biomass-based diesel supply curve developed in this earlier farmdoc daily article (December 13, 2013) and updated to reflect current levels of key supply variables. Specifically, the assumed values are $0.35 cents per pound for soybean oil, $8 per 1,000 cubic feet for natural gas, $1.3 per pound for methanol, and $0.7 per gallon for glycerin. It is important to recognize that this supply curve represents the responsiveness of biomass-based based diesel, which includes both conventional biodiesel and renewable diesel. This broader definition is used to reflect the rise of D4 RINs generation in recent years via renewable diesel. The demand curve is determined by the current level of wholesale ultra low sulfur diesel prices, assumed to be $2.65 per gallon. 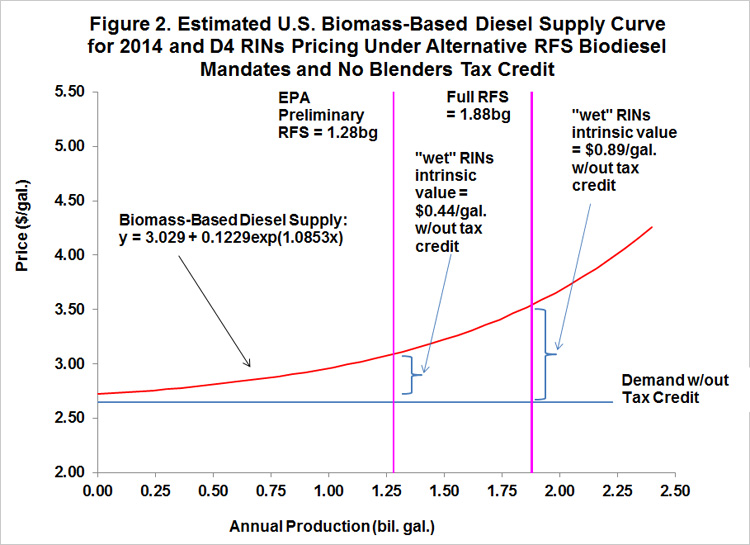 Under the previous assumptions, the market equilibrium quantity of biodiesel (both conventional and renewable) in Figure 2 is zero because the demand curve does not intersect with the supply curve for any positive quantities. So, it is not surprising that both levels of the total biodiesel mandate are highly binding. Specifically, in order to get the higher than equilibrium quantity produced under the two mandates, biodiesel producers must be paid a price that is higher than the demand (diesel) price. The supply prices are $3.09 and $3.54 per gallon for the 1.28 and 1.88 billion gallon biodiesel mandates, respectively. From the perspective of a diesel blender, a wedge is present between the price paid to biodiesel producers and the price charged to consumers for the biodiesel in diesel blends. This wedge is the diesel price minus the biodiesel price, or biodiesel blending margin, at the mandated quantity. The predicted blending margin is -$0.44 and -$0.89 per gallon with total biodiesel mandates of 1.28 and 1.88 billion gallons, respectively. After multiplying through by -1, the wedge also equals the “wet” intrinsic value of a D4 biodiesel RINs. The “wet” terminology is used because a gallon of physical biodiesel generates 1.5 ethanol equivalent RINs. An options analogy is used to divide a RINs price into two components: RINs = intrinsic value + time value. Intrinsic value refers to the immediate value of exercising a RINs “option,” which in this case is equivalent to the negative of the loss blenders incur today by blending biodiesel.

Pricing changes dramatically if the $1 per gallon tax credit is reinstated retroactively for 2014. Figure 3 shows that with the tax credit in place the market equilibrium quantity of biodiesel (conventional and renewable diesel) increases to 1.98 billion gallons. This completely unbinds both the 1.28 and 1.88 billion total biodiesel mandates and results in a zero wet RINs intrinsic value for both scenarios. What basically happens is that the assumed soybean oil price is low enough and the diesel price is high enough that the $1 tax credit makes the two mandates irrelevant. Of course, relative small changes in soybean oil and diesel prices in the opposite directions could result in at least the 1.88 billion gallon mandate returning to a binding status. 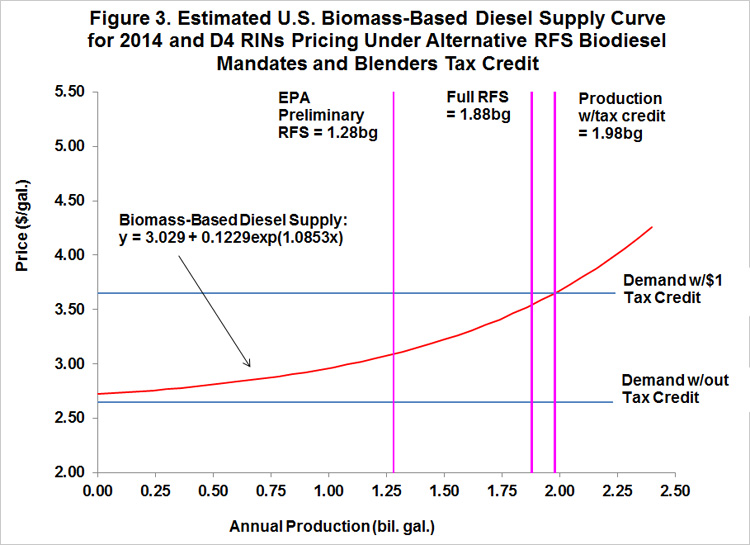 The complete results of the analysis are provided in Table 1 for each of the four policy scenarios. Note that intrinsic value is simply the blending margin multiplied by -1 and divided by 1.5. We have already projected intrinsic values, so we need to project time values in order to project the total value of D4 biodiesel RINs in each scenario. Note that time value reflects the chance that blending margins will be even larger (bigger losses) in the future. This approach is a change from our previous analysis of D4 RINs pricing using the same conceptual model of the biodiesel market (for example, farmdoc daily February 28, 2014). We previously ignored time value because D4 RINs “options” were “deep-in-the-money” and these types of options typically have small time value. However, time value has actually been surprisingly large historically (farmdoc daily, October 10, 2014) and it also has varied substantially over time. This is not terribly surprising when one considers the ongoing uncertainty about key policy variables and the inherent volatility of biodiesel and diesel prices. A simple rule is used here to set time value as 40 percent of total option value in the first two scenarios when intrinsic values are positive. This reflects the actual split between intrinsic and time values in recent years. When intrinsic value is zero, as it is in the last two scenarios, projecting time value is more problematic. We simply set it here to $0.20, the lower of the two time values in the first two scenarios.

With the previous assumptions, the projected D4 biodiesel RINs prices range from a low of $0.20 when the tax credit is reinstated to a high of $0.99 with no tax credit and a 1.88 billion gallon biodiesel mandate. This indicates there is a wide range of plausible D4 RINs prices for 2014 based on the level of the total biodiesel mandate that is finally required and whether the tax credit is reinstated or not. The effect of the tax credit looms especially large. If the credit is not in place and statutory levels of the mandates are eventually required (e.g., via a successful court challenge) then the cost of complying with the RFS to obligated parties will be quite high, not only because the RINs price is high but also because the price of a D6 ethanol RINs is the same as a D4 biodiesel RINs. If the credit is restored most of the compliance cost is transferred from obligated parties (and presumably consumers) to taxpayers. Finally, it is interesting to observe that the projected D4 price, $0.49 per gallon, in the first scenario of no renewable gap, a 1.28 billion biodiesel mandate, and no tax credit is quite close to the level of D4 prices that has prevailed in recent months (see Figure 5 in last week’s farmdoc daily article). This once again highlights the low probability that the RINs market is apparently attaching to the blenders tax credit being reinstated retroactively for 2014.

Biodiesel RINs play a key role in the RFS when the renewable (ethanol) mandate exceeds the E10 blend wall. In this circumstance, the price of the D4 biodiesel RINs basically sets the level of all other RINs categories since it is the marginal pathway for complying with the renewable mandate. In order to provide some perspective on the potential marginal cost of complying with the RFS, the price of 2014 D4 biodiesel RINs is projected under four policy alternatives. Scenarios vary depending on the level of the renewable mandate and whether the biodiesel blenders tax credit is reinstated or not. The projected D4 biodiesel RINs prices for 2014 range from a low of $0.20 when the tax credit is in place to a high of $0.99 with no tax credit and full implementation of statutory RFS mandates. This indicates there is a wide range of plausible D4 RINs prices for 2014 based on the level of the biodiesel mandate that is finally required and whether the tax credit is reinstated or not. The effect of the tax credit looms especially large. The analysis also once again highlights the low probability that the RINs market is apparently attaching to the blenders tax credit being reinstated retroactively for 2014.

"Department of Energy Analyses in Support of the EPA Evaluation of Waivers of the Renewable Fuel Standard," Accessed on October 15, 2014: http://ethanolrfa.3cdn.net/1c8f40b533c12645b1_ubm6i6l9b.pdf

Irwin, S. "Rolling Back the Write Down of the Renewable Mandate for 2014: The RINs Market Rings the Bell Again." farmdoc daily (4):148, Department of Agricultural and Consumer Economics, University of Illinois, August 8, 2014.

Irwin, S., and D. Good. "Who Wins if the EPA Reverses Itself on the Write Down of the Renewable Mandate in 2014?" farmdoc daily (4):38, Department of Agricultural and Consumer Economics, University of Illinois at Urbana-Champaign, February 28, 2014.