The ethanol production industry in the U.S. has been on an unusually long “winning streak” in recent years. A run of historically high profits began in March 2013, punctuated by a spectacular spike during February-April 2014. The high profits were largely the result of steady or rising ethanol prices and falling corn prices. At several points during the run we argued the equilibrium long-run level of ethanol production profitability was much lower and either ethanol prices had to fall or corn prices had to rise in order to restore equilibrium (farmdoc daily, March 14, 2014, May 7, 2014, June 11, 2014). It was further argued that ethanol prices would likely bear the brunt of the adjustment. To the dismay of ethanol producers, the predicted adjustment process was painfully accurate. The purpose of today’s farmdoc daily article is to examine the decline in ethanol production profits and the price adjustments that have driven the decline.

The analysis is based on the same basic model of a representative Iowa ethanol plant used in several previous articles on ethanol profits (see for example April 11, 2012, June 14, 2013, and March 14, 2014). Rather than repeat the details of the most recent version of the plant model the reader is directed towards the March 14, 2014 article for further details on the model. Figure 1 presents the updated (pre-tax) estimates of ethanol production profits per gallon of ethanol produced. Note that earlier articles presented profits per bushel of corn processed whereas profits per gallon of ethanol are presented in this article. The switch reflects the more standard industry approach to presenting profits (profits per bushel of corn processed can be easily derived by multiplying per gallon profits by 2.8, the assumed conversion factor for corn to ethanol). The chart highlights the historic run of profits that began in the second week of March 2013 and technically still continues given the small positive profits of recent weeks. The streak of positive profits has lasted 84 weeks, compared to the next longest streak of 34 weeks. The drop in profits that started in the first week of September was unusually fast and steep. Estimated profits on September 5 were $0.58 per gallon, about five times average (normal) profits over this time period, and within four weeks dropped to under $0.05 per gallon. While the run of profitability appears to be coming to a close, some perspective on the magnitude of the profits earned during the run is helpful. Specifically, a representative ethanol plant earned a cumulative $66.3 million profit during the current 84-week streak (March 15, 2013 – October 17, 2014). This is more than twice the cumulative $25.0 million in profits earned during the previous 320 weeks (January 25, 2007 – March 8, 2013). 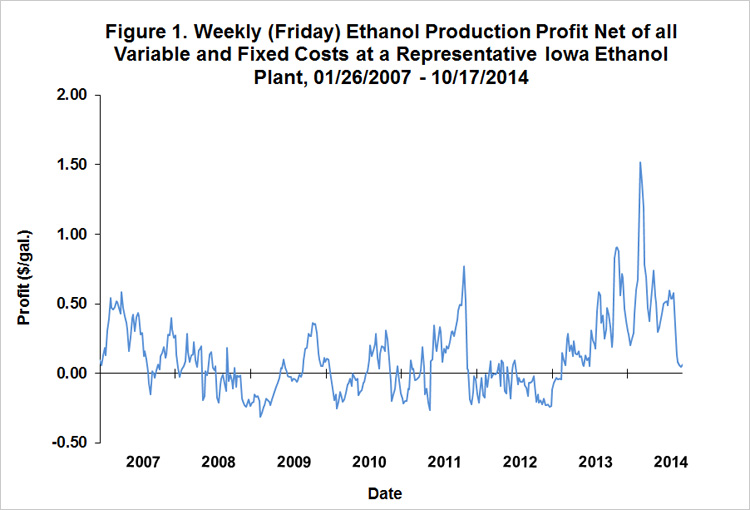 Figure 2 suggests that the recent sharp drop in production profits can be largely explained by a corresponding steep decline in ethanol prices. The price of ethanol was $2.02 per gallon on September 5 and by October 17 had dropped over $0.50 per gallon to $1.50. Prices actually dipped as low as $1.44 in recent weeks. These are the lowest prices since mid-2010 and very close to the late-2008 recession low of $1.40. It is interesting to observe that the price of DDGS, the other main component of ethanol revenue, has changed little since August (Figure 3). The big drop in DDGS prices from the peak of about $250 per ton occurred earlier in April through July. The price of corn, which represents the main input cost for ethanol producers, has dropped only about $0.20 per bushel since August (Figure 4). These comparisons demonstrate that the steep drop in ethanol production profits in recent weeks has indeed been driven almost solely by declining ethanol prices. 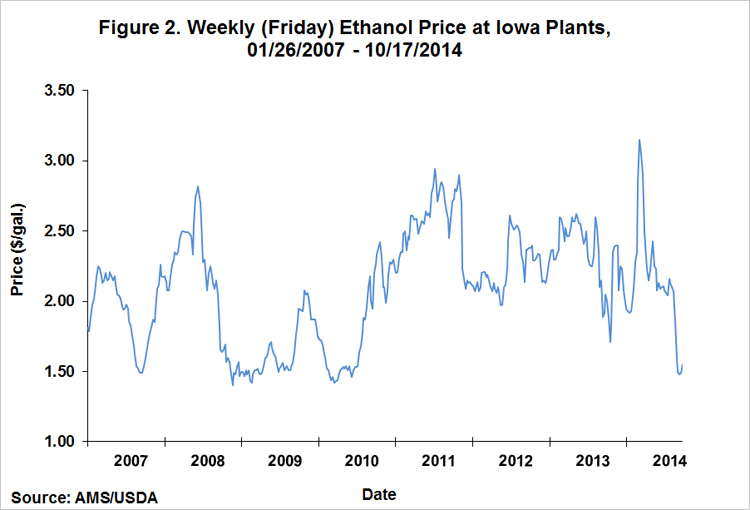 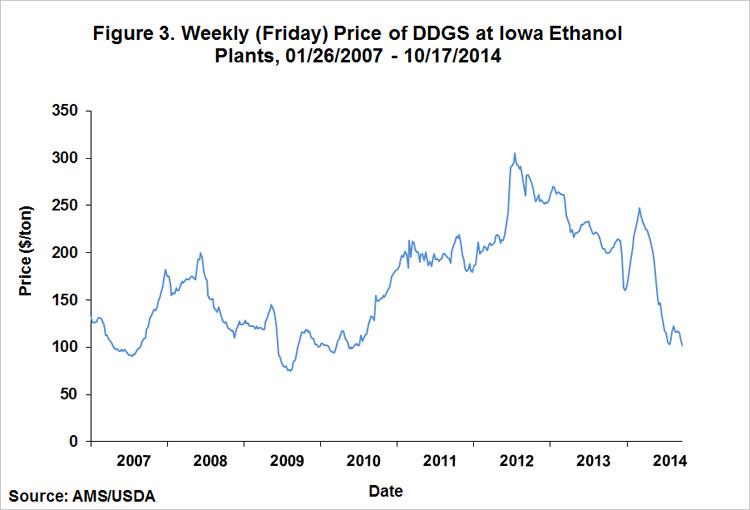 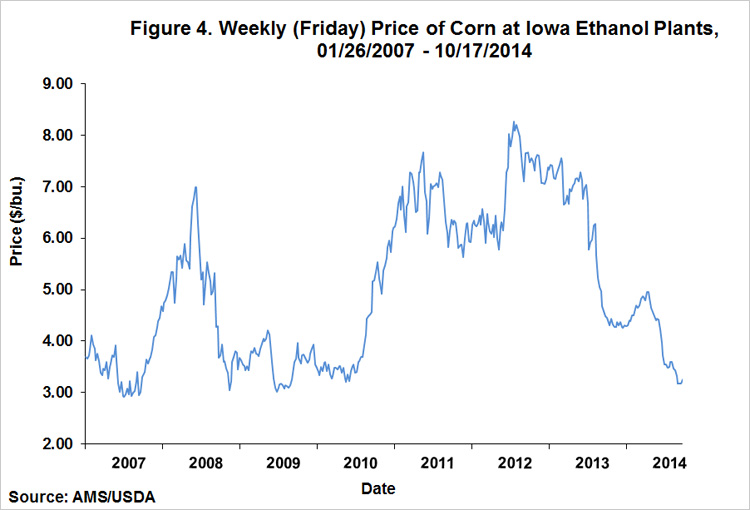 As noted above, we predicted several times during the recent long streak of positive production profits that the situation was unsustainable and ethanol prices would likely to bear the brunt of the adjustment back to equilibrium. These predictions were based on the documented “co-integrating” relationship between ethanol and corn prices (Mallory, Irwin, and Hays), which simply means that the relationship between ethanol and corn prices tends to revert to levels implied by an equilibrium long-run level of ethanol production profitability. For example, if the ethanol price is too high relative to the price of corn, then either the ethanol price must fall or the corn price must rise in order to restore the level of profits to a long-run equilibrium. The constraint represented by the E10 blend wall actually allows an even more specific prediction to be made, as outlined in the farmdoc daily article on June 11, 2014. If the equilibrium quantity of ethanol is constrained by the E10 blend wall and shifts in the supply curve of ethanol are assumed to be solely due to the changing price of corn, then the price of corn completely determines the price of ethanol (up to the breakeven price of ethanol for gasoline blenders). Consequently, in the face of declining corn prices, ethanol prices should quickly recede back to a level consistent with a normal profit level. We argued in the June 11 article that surging U.S. ethanol exports and declining imports explained why the typical adjustment process had been delayed relative to expectations. In essence, the surging exports “unbound” the ethanol market from the pricing constraint imposed by the E10 blend wall.

Now that ethanol production profits have been drive back to a level near the estimated long-run equilibrium of $0.12 per gallon, an interesting question is whether this adjustment was driven by a cooling off of ethanol exports. If the long run of high ethanol prices and production profits is explained by the surge in ethanol exports, it is logical to expect that a reversal of the surge is related to the drop in prices and profits. Unfortunately, ethanol export data are only released with a two-month lag, so analysis of this issue must be delayed to a future date.

Ethanol production profits literally hit a wall in the last month. While the decline was startling in its speed and magnitude, it is consistent with basic economic logic. With profits averaging more than two times the normal level since March 2013, something had to give to restore equilibrium. That something was the price of ethanol, which dropped more than $0.50 per gallon in September 2014 alone. While the recent drop in prices and profits is certainly painful for ethanol producers, it is important to keep in mind the magnitude of the profits earned during the recent and unprecedented streak of positive profits. Specifically, a representative ethanol plant earned a cumulative $66.3 million profit during the current 84-week streak (March 15, 2013 – October 17, 2014), which is more than twice the cumulative $25.0 million in profits earned during the previous 320 weeks (January 25, 2007 – March 8, 2013).

Irwin, S. "An Updated Look at the Profitability of Ethanol Production." farmdoc daily (3):115, Department of Agricultural and Consumer Economics, University of Illinois at Urbana-Champaign, June 14, 2013.

Irwin, S. "A Look at the Profitability of Ethanol Plants." farmdoc daily (2):68, Department of Agricultural and Consumer Economics, University of Illinois at Urbana-Champaign, April 11, 2012.

Irwin, S., and D. Good. "Why Are Ethanol Prices and Production Profits So High?" farmdoc daily (4):108, Department of Agricultural and Consumer Economics, University of Illinois at Urbana-Champaign, June 11, 2014.