A model of a representative Iowa ethanol plant is used to track the profitability of ethanol production. It is the same basic model that has been used the last several years in numerous farmdoc daily articles on ethanol markets and policy (see the article on March 5, 2015 for details). The model is meant to be representative of an “average” ethanol plant constructed in the last decade. There is certainly substantial variation in capacity and production efficiency across the industry and this should be kept in mind when viewing profit estimates from the model.

Figure 1 presents the (pre-tax) estimates of ethanol production profits net of all variable and fixed costs. It is surprising to see how well profits have held up in the face of the historic plunge in crude oil prices. Net profits have been in the red only five weeks since the start of 2015 and averaged $0.11 per gallon. While this pales in comparison to the average profit of $0.43 per gallon during the record run of profits stretching from mid-March 2013 through December 2014, it is almost three times the average profit of $0.04 per gallon earned during all the weeks preceding the record streak (January 26, 2007 – March 8, 2013). 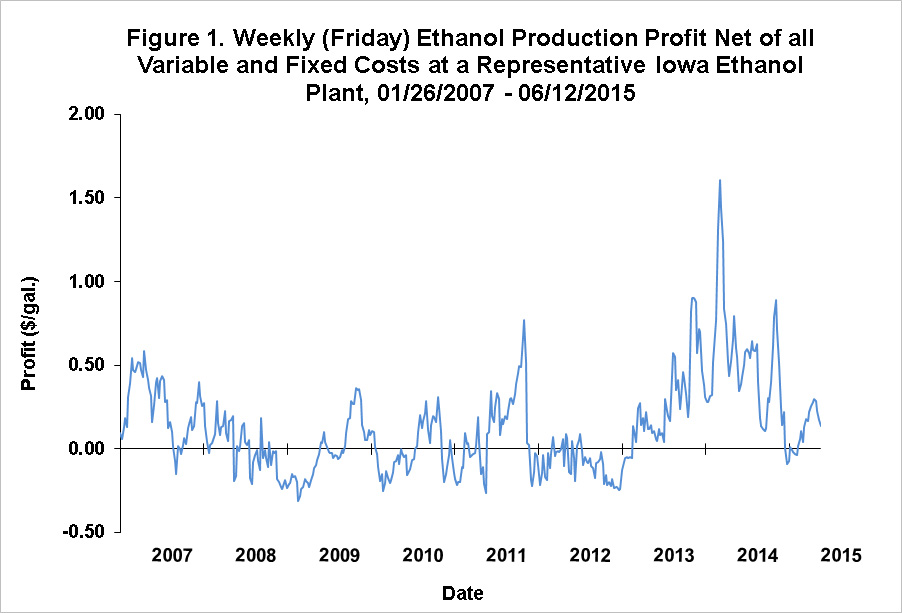 Several factors are responsible for the continued profitability of ethanol production. First, as shown in Figure 2, wholesale CBOB gasoline prices have increased over a $1 per gallon since the first of the year and this is at least partially responsible for the recovery of ethanol prices back to the $1.40 – $1.50 per gallon range. Second, Figure 3 indicates that DDGS prices have remained elevated relative to corn prices longer than expected. Analysis in this farmdoc daily article (March 12, 2015) uncovered a seasonal pattern of summer weakness in DDGS prices relative to corn; however, DDGS continued to be priced at a 20-30 percent premium to corn well into June this year. The premium has turned down in recent weeks and this could signify a return the normal seasonal pattern. If DDGS prices simply return to par relative to corn prices, this would drop total revenue about $0.10 per gallon and drive net profits down close to breakeven levels. Third, as seen in Figure 3, corn prices have experienced only a minimal recovery since lows last fall. This has contributed significantly to holding down costs of production for ethanol producers. Fourth, natural gas costs have been at historically low levels in 2015 to date, typically only $0.10 – $0.11 per gallon. This is compared to an average cost of $0.17 per gallon in 2014. 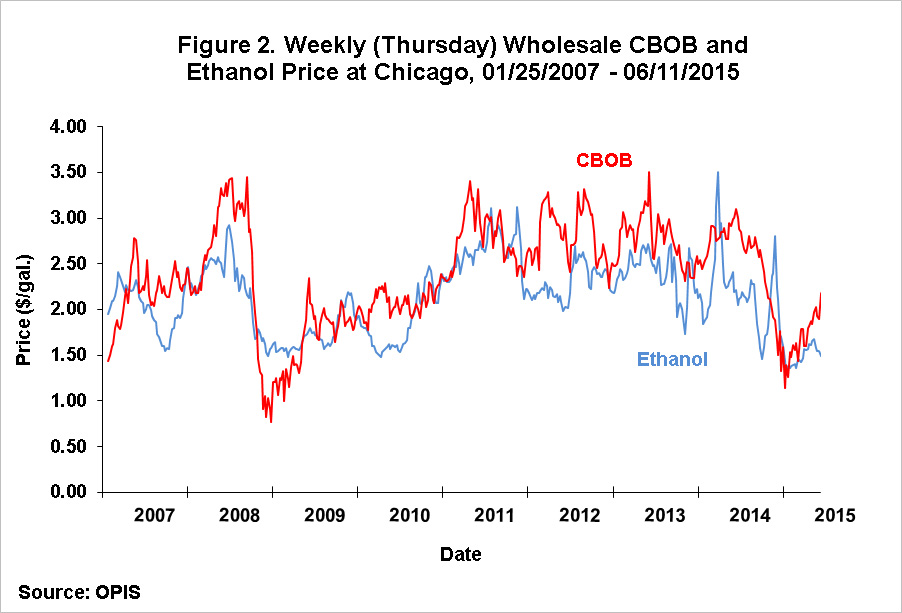 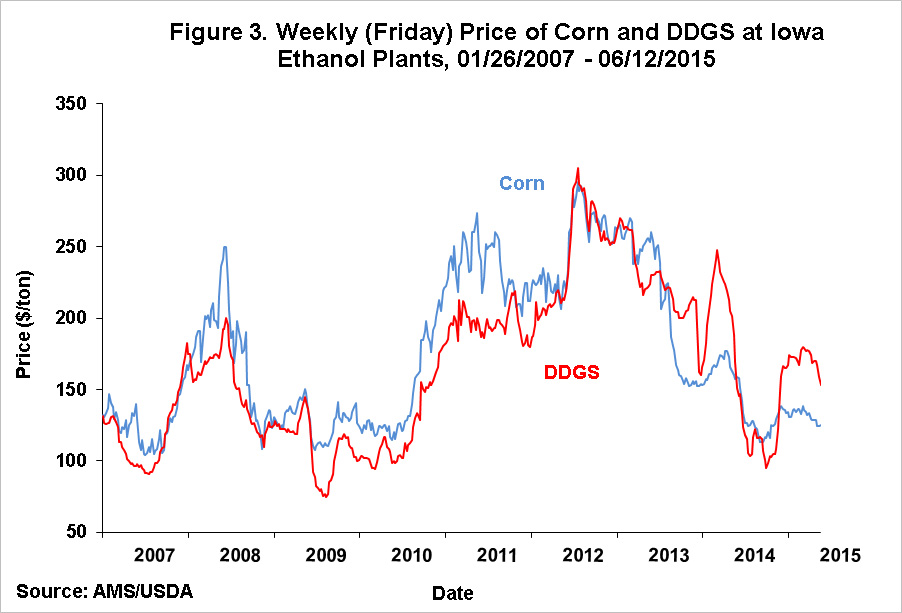 We now have enough data to answer the question whether the record profits of 2013-2014 were a temporary blip due to a unique set of circumstances or reflected a new normal driven by a robust ethanol export market. The answer appears to be some of both. The extreme profits of 2013-2014 have not been repeated so far in 2015. However, profits have been surprisingly robust when compared to average profits previous to the record streak in 2013-2014. Net profits so far in 2015 averaged $0.11 per gallon, almost three times the average profit of $0.04 per gallon earned over 2007-2012. Whether the profits can be maintained at this level will depend to a considerable degree on DDGS prices, which have been very strong relative to corn prices in recent months.