In previous farmdoc daily articles on biodiesel production profits (September 18, 2013; September 25, 2013; March 19, 2014; October 30, 2014; January 28, 2015), a feast or famine pattern of profitability was highlighted. For example, the biodiesel industry experienced the feast side of the ledger in 2013 with record large profits, while losses placed the industry in 2014 on the famine side of the books. The feast or famine pattern is closely tied to policy incentives through the biodiesel tax credit and RFS mandates. The tax credit was reinstated late in 2014 for the 2014 calendar year. Reinstatement is uncertain for 2015. The EPA’s recent proposal for RFS standards included rising biodiesel mandates over 2014-2017 and appeared to signal a willingness to continue increasing the biodiesel mandate through the remaining life of the RFS in 2022 (farmdoc daily, June 17, 2015). The purpose of this article is to update estimates of biodiesel production profits through June 2015 and analyze whether the EPA proposal released at the end of May has had a measurable impact on profitability.

A model of a representative Iowa biodiesel plant is used to track the profitability of biodiesel production. It is the same basic model that has been used the last several years in numerous farmdoc daily articles on biofuels markets and the RFS (see the article on January 28, 2015 for details). This model is meant to be representative of an “average” plant constructed since 2006 to process soybean oil into biodiesel. There is certainly substantial variation in capacity, production efficiency, and feedstock across the industry and this should be kept in mind when viewing profit estimates from the model. However, limiting the feedstock to soybean oil is reasonable since it represents about half of the feedstock used to produce biodiesel in the U.S. and feedstock prices tend to be highly correlated.

Figure 1 presents the (pre-tax) estimates of biodiesel production profits net of all variable and fixed costs. It shows that the production losses that started last August have largely continued unabated in 2015. The representative plant generated a positive margin in only six weeks since the beginning of the year and losses have averaged -$0.08 per gallon. The best that can be said is that there was an uptrend in the estimated profits after the lows of late last year and early this year. There also has been no appreciable impact from the release of the EPA proposal for 2014-2017 biodiesel mandates at the end of May. The average loss was -$0.04 per gallon in May and -$0.03 in June. In sum, there is no evidence to date that the rising biodiesel mandates in the EPA proposal have pressured biodiesel prices and profits upward. 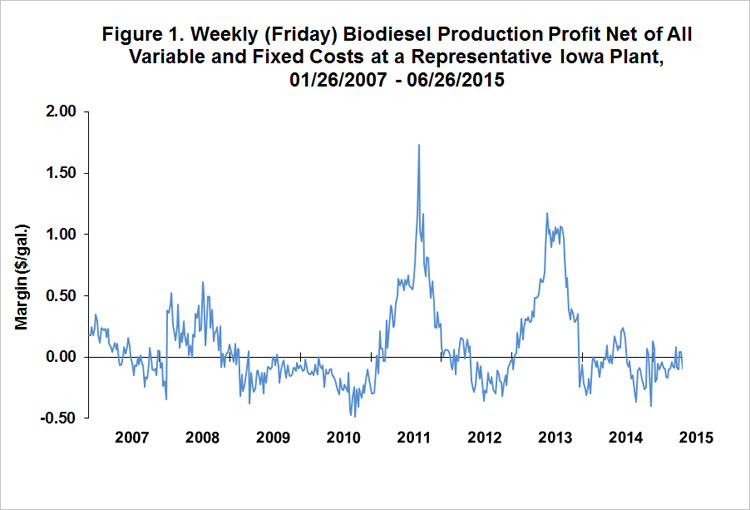 Additional insight about biodiesel profitability is provided by Figure 2. Here, the biodiesel price at Iowa plants is plotted versus a simplified breakeven profit relationship between soybean oil and biodiesel prices. Since soybean oil represents over 80 percent of the variable operating costs of the representative plant, all other costs are lumped into the constant term of 0.60, or 60 cents per gallon of biodiesel produced. The 7.55 slope is just the number of pounds of soybean oil assumed here to produce a gallon of biodiesel. One can readily observe that the line for the breakeven relationship tracks the biodiesel price very closely except for two major spikes in 2011 and 2013. In other words, outside of the two spikes, the market has generally priced biodiesel based on the cost of soybean oil, a markup for other variable and fixed costs, and zero profits. This has certainly continued to be the case in 2015. 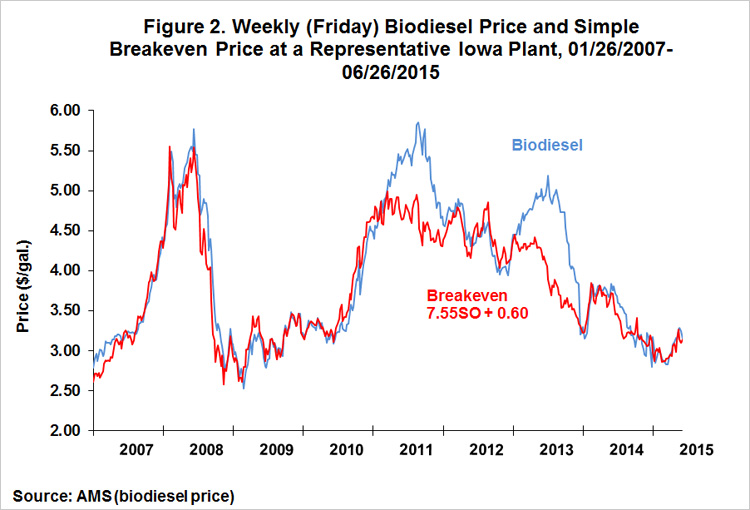 The first half of 2015 was not kind to the biodiesel production industry, with net losses averaging -$0.08 per gallon. This is just a continuation of the pattern that, with a few exceptions, has been in place since January 2014. There also has been no appreciable impact to date from the release of the EPA proposal for 2014-2017 biodiesel mandates at the end of May. This is especially interesting because the EPA proposal includes substantial increases in biodiesel mandates over time. The release of the EPA proposal on May 29 did have a positive impact on both soybean oil and biodiesel prices, but the increases largely offset one another, leaving profits roughly unchanged. This suggests the market believes there is sufficient slack production capacity inside and outside of the U.S. to fulfill the mandates without having to drive biodiesel profits above break-even levels, or uncertainty about the level of mandates that will ultimately be implemented is delaying market adjustments.