Today’s article provides another quarterly update on Renewable Identification Number (RIN) generation in 2015 based on available data from EPA’s EMTS through September. Articles from April 29, 2015 and July 23, 2015 provide first and second quarter updates. Gross generation for non-cellulosic advanced (D4 and D5) and ethanol (D6) RINs are compared with the implied mandate needs from EPA’s proposed rule for 2015.

This article also explains another adjustment to the methodology of tracking net available RINs for compliance use, specifically in the treatment of ethanol export data used to adjust D6 RINs from gross generation to net availability for compliance. Since the Mid-Year RIN Update, it has been shown that EPA’s use of total ethanol exports reported by the Energy Information Administration (EIA) to adjust D6 RIN figures is incorrect. A correction to this adjustment is outlined using more detailed ethanol export data from the US Department of Commerce (DOC), available and accessed through US International Trade Commission’s Interactive Tariff and Trade DataWeb.

Using the DOC export numbers to determine net availability of D6 RINs generated in 2014 results in 13.6 billion gallons rather than 13.25 billion gallons cited by the EPA in their proposed rulemaking for 2014, 2015, and 2016. This creates additional controversy over where the final mandate levels should and will be set for 2014 and future years. 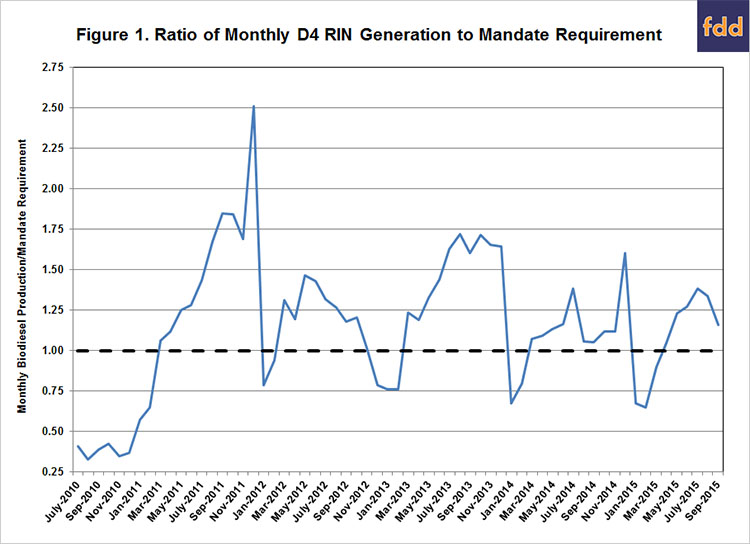 Over 2 billion 2015 D4 RINs have been generated through September, an average generation rate of nearly 228 million RINs per month. Extending that pace of generation through the final quarter of 2015 would result in more than 2.7 billion D4 RINs generated in 2015. Generation at this level would meet proposed mandate needs for 2015 without requiring the use of any existing D4 RIN stocks for compliance. However, biodiesel exports will make a portion of those RINs unavailable for mandate compliance.

Monthly generation of 2015 D5 RINs has been between 4 and 5 million gallons for most of the year. However, D5 generation jumped to over 15 million gallons in April and then to over 20 million and 24 million in August and September, respectively. Through September, more than 90 million D5 RINs have been generated, or an average of roughly 10 million D5 RINs per month. Extending that average monthly generation rate through the final quarter of 2015 projects total D5 generation at more than 120 million RINs.

These estimates suggest projected gross generation of non-cellulosic advanced RINs (D4 and D5 categories) at 2.85 billion RINs for 2015. This slightly exceeds the proposed non-cellulosic advanced mandate proposed for 2015 of 2.794 billion gallons (2.9 billion total advanced less 106 million cellulosic). Again, biodiesel exports will retire a portion of the total advanced RINs generated in 2015. The level of those exports and the final mandate level will determine if RIN generation in 2015 will imply the need for existing advanced RIN stocks, or the building of additional RIN stock levels. 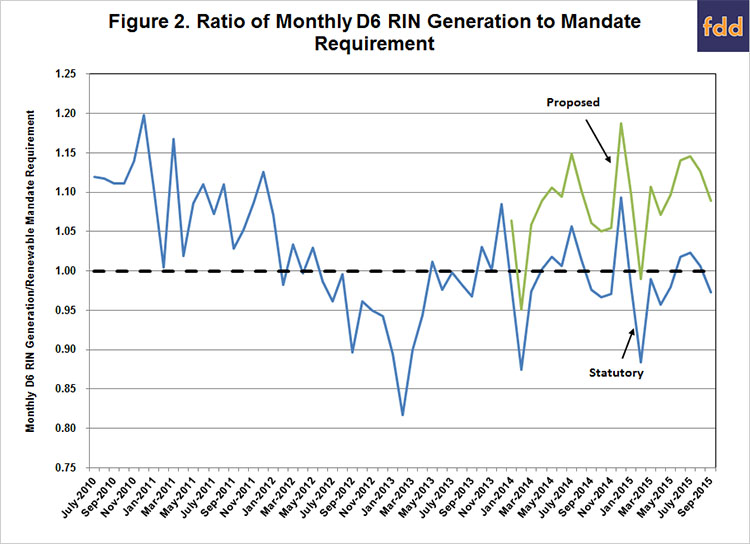 Generation of D6 RINs has been relatively steady in 2015 averaging 1.224 billion gallons per month, and ranging from 1.1 to 1.28 billion gallons per month. Through September, a total of more than 11 billion D6 RINs have been generated, suggesting that nearly 14.7 billion will be generated in 2015. This level of generation would provide sufficient D6 RINs for compliance with the 13.4 billion gallon proposed mandate level in 2015. As in the case of advanced RINs, ethanol exports will retire a portion of these RINs making them unavailable for compliance use in 2015 or future years. Any remaining excess RINs could build additional D6 stocks for future compliance use, but would likely require blend rates which push further beyond the 10% “blend wall.”

In the Mid-Year RIN Update, the methodology used in tracking RIN stocks was updated to reflect the EPA’s calculations in their proposed rulemaking released in June. Specifically, gross RIN generation in 2014 was adjusted to account for RIN retirements for non-compliance purposes and exports. Non-compliance retirement values can be obtained from the EMTS system, however the reporting requirements for export retirements are not available in “real-time” through the EMTS. To account for exports, EPA used total ethanol exports from the EIA.

However, total ethanol exports reported by EIA include denatured and undenatured ethanol. Only denatured ethanol produced for fuel use would be eligible for RIN generation, thus only these denatured ethanol exports should be considered in the adjustment from gross RIN generation to net available RINs for compliance. While EIA export data do not provide this categorization, the export data from the DOC does separate exports by type and use. This error was pointed out in a Renewable Fuels Association analysis of the proposed mandate for D6 RINs in 2014, and admitted by the EPA in a federal docket memo.

Table 1 incorporates this export reporting adjustment in estimating net available RINs for compliance across each D-code for 2014. Gross generation values and retirements for non-compliance purposes (Other Use) as reported in EMTS as of November 2nd, 2015 are shown across all D-code classes. Export retirement numbers are assumed to be zero for the D3 and D5 RIN categories. Exports of D4 RINs are set at the exports reported for biodiesel by EIA, adjusted to RIN-gallons using an average equivalence value of 1.5 RINs per wet or physical gallon. Exports of D6 RINs are equal to the exports of denatured ethanol for fuel use reported by the DOC. 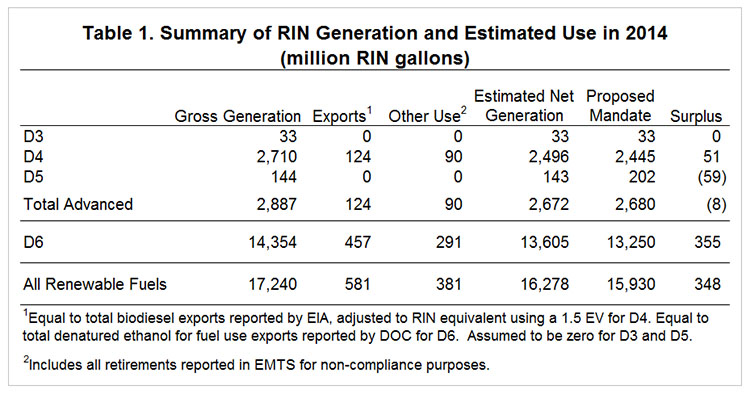 Estimated net generation is then equal to gross RIN generation less RIN-equivalent exports and other uses. This value represents an estimate of the quantity of RINs in each D-code that are available for use toward 2014 mandate compliance.

The main change from the Mid-Year RIN Update in table 1 shows up in the D6 category for exports and, ultimately, net generation. Total EIA exports for 2014 are reported at approximately 847 million gallons, but the DOC estimate of denatured ethanol for fuel use exports represents just 457 million gallons of that total.

However, with final rules for the 2014 compliance period yet to be released, the controversy over what final mandate levels will be set at continues. The EPA justified their proposed RFS mandate levels for 2014 as being set at the levels of fuel “actually used” based on a calculation of net available RINs. Net available RINs were defined as total gross generation less RIN retirements or adjustments for non-compliance use and exports. In setting the proposed mandate levels, EPA used a measure of total exports reported by the EIA for ethanol and biodiesel to determine net availability of D6 and D4 RINs, respectively. The use of total exports from EIA has since been shown to overstate potential RIN retirements for ethanol as a portion of exports would not have generated D6 RINs when the ethanol was produced.

Adjusting the export values to account for this leads to net available RINs for 2014 of approximately 13.6 billion gallons, or 350 million gallons more than the proposed mandate level of 13.25 billion gallons. It is yet to be determined whether this will lead to further adjustments to mandate levels in EPA’s final rulemaking for 2014 and future years. An upcoming daily article will examine the impact of the export adjustment on RIN stocks and mandate compliance in 2015.