Today’s article provides the first quarterly update on Renewable Identification Numbers (RINs) for 2015 by looking at RIN generation activity based on available data through March from EPA’s EMTS. Uncertainty remains regarding final RFS compliance rules for 2014 and future years. This post examines two different 2014 compliance scenarios (proposed rule vs statutory mandate levels), and discusses the implications moving forward in terms of compliance in 2015.

Figure 1 plots monthly D4 RIN generation relative to implied monthly mandate needs (annual mandate divided by 12) using data from the EMTS from July 2010 through March 2015. For 2015, the mandate for biodiesel (D4 RINs) is assumed to be held at 1.28 billion gallons (1.92 billion RINs). Note that not even a proposed rule for 2015 has been announced yet by EPA, so this level could change. 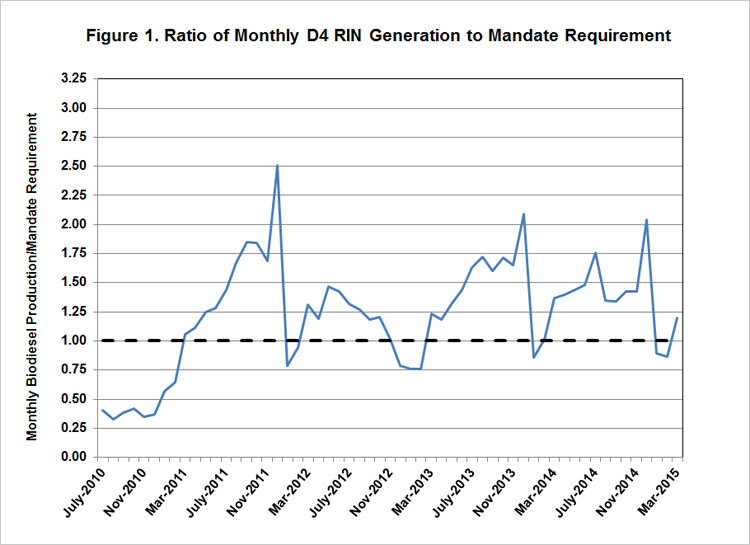 After peaking at over 300 million in December of 2014, generation of D4 RINs has fallen dramatically in 2015. Generation thus far in 2015 has been 143 million, 138 million, and 191 million RINs in January, February, and March, respectively. Extending 1st quarter generation rates through the end of the year implies total generation of just under 1.9 billion D4 RINs, falling just short of the 1.92 billion gallon level used in 2013 and proposed for 2014. Note however, that generation in early 2014 was also behind the pace required to meet the proposed mandate for the year and then picked up considerably to surpass mandate needs by almost 800 million RINs last year.

Generation of D5 advanced biofuel RINs has averaged just 4.8 million per month through March in 2015, well below the monthly average of 11.9 million generated in 2014. At this rate, just 58 million D5 RINs would be generated in 2015. However, monthly D5 RIN generation has historically been quite volatile. For example, monthly generation in 2014 ranged from a low of 4.3 million in September to a high of 27.4 million in May. Thus, with only 3 month of actual generation numbers it is difficult to formulate a reliable estimate for total D5 generation in 2015.

Figure 2 plots D6 RIN generation relative to implied mandate needs from July 2010 through March 2015. Despite low oil prices and concerns over the ability of ethanol producers to generate the profits needed to stay in operation (see farmdoc daily March 5, 2015), D6 RIN generation has remained high in the early months of 2015. More than 1.2 billion D6 RINs were generated in January and March, and nearly 1.1 billion were generated in February. Projecting this level of generation through the end of the year results in an estimate of over 14.2 billion D6 RINs in 2015. While this level of generation falls short of the 15 billion gallon statutory level set in the RFS for 2015, it is well ahead of the 13 billion level proposed by EPA for 2014. 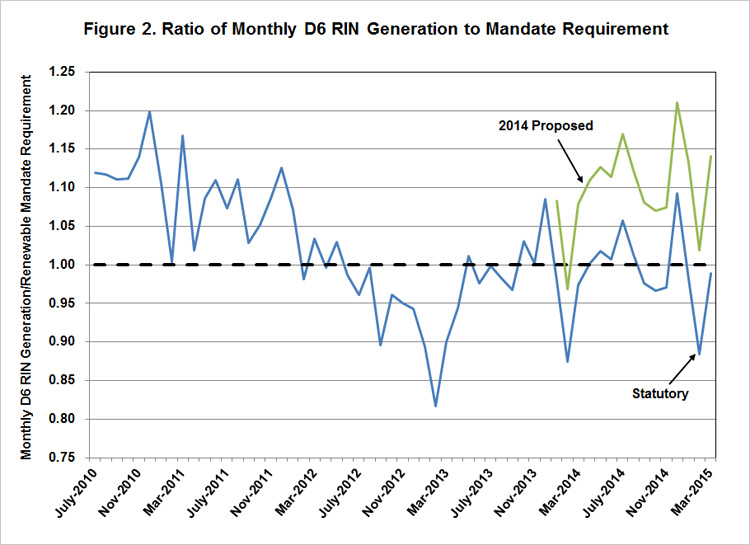 With a final rule not yet announced for the 2014 compliance year, estimated carry-in and net RIN generation for 2014 can be used only to examine compliance scenarios. Table 1 outlines two scenarios, with the left hand column representing compliance at the levels proposed by EPA for 2014 and the right hand column representing compliance at original statutory levels. For each D-code category, a carry-in estimate for 2014 is included. Note that the total estimated carry-in for 2014 is 1.875 billion RIN gallons, but the composition of this carry-in differs across the scenarios due to the rollover provisions outlined in the RFS. With the lower mandate on advanced biofuels, carry-in of D4 and D5 RINs is smaller in the proposed mandate scenario, with the balance eligible for use as D6 RINs for compliance with the renewable mandate component. Readers can refer to previous RIN update posts for 2014 for a more detailed discussion of these scenarios and the related calculations for carry-in (see farmdoc daily April 11, 2014, August 6, 2014, and December 12, 2014). 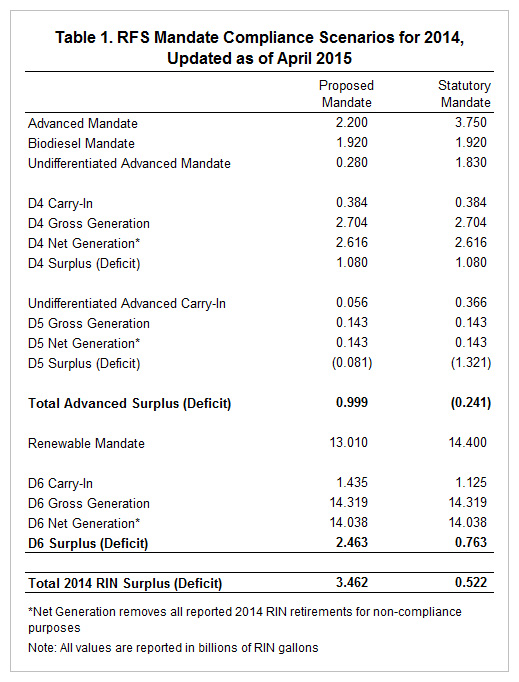 One of the key points to highlight in Table 1 are the potential scenarios for compliance with the advanced portion of the mandate. At proposed levels for 2014, the carry-in and net generation of D4 and D5 RINs is more than sufficient to cover the proposed mandate level of 2.2 billion gallons. In fact, it is estimated that a nearly 1 billion gallon surplus of advanced RINs would be available for 2014 compliance under the proposed rule.

At the statutory level of 3.75 billion gallons the story is much different. In this scenario, carry-in plus net generation of advanced RINs would fall 241 million RINs short of the advanced mandate level. This suggests that the obligated parties are expecting the majority of the proposed reduction in the advanced portion of the mandate to hold.

The second key point to highlight in Table 1 is how compliance towards the renewable component, often thought of as the corn-ethanol mandate, will be achieved for 2014. Estimated carry-in plus net D6 generation in 2014 totals over 15 billion gallons. Under the proposed mandate of 13 billion gallons, there would exist a surplus of D6 RINs for 2014 exceeding 2.4 billion. At the statutory mandate level of 14.4 billion gallons a D6 RIN surplus is still estimated but at a much lower level of just over 750 million gallons. This suggests that obligated parties are less confident that the proposed mandate level will ultimately be finalized, and enough D6 RINs were generated in 2014 to meet the statutory mandate when accounting for carry-in of RINs from 2013.

Looking ahead to compliance for the current year of 2015 is even more uncertain given that rules for 2014 have not yet been finalized and even proposed rules for 2015 have not been announced. But the estimates for net RIN generation, and the 2014 compliance scenarios examined in Table 1 can be used to formulate estimates for what 2015 RIN carry-in levels could be. Under the proposed rule, potential carry-in for 2015 was shown to be nearly 1 billion advanced (D4 and D5) RINs and 2.463 billion D6 RINs. These levels would fall below the 20% rollover limits for both statutory mandate components for 2015 (5.5 billion gallons advanced and 15 billion gallons renewable). However, the statutory mandate level scenario for 2014 would result in no available advanced RIN carry-in for 2015 (and in the extreme case an advanced RIN deficit that must be made up in 2015), and D6 carry-in for 2015 of just 763 million gallons. A carry-in of this level would be the lowest experienced in the few years that the RIN system has been in place, providing a much smaller cushion for obligated parties to use in meeting whatever mandate levels are eventually finalized for 2015.

Based on data from EPA’s EMTS, RIN generation through the first quarter of 2015 is compared with implied RFS mandate needs. In contrast, and despite concerns over profitability for ethanol producers and resulting production levels this year, D6 RIN generation has remained at or even slightly above typical levels from last year. However, in all cases, RIN generation is lagging behind implied needs for statutory mandate levels in 2015, suggesting that the industry expects the RFS to be revised down from legislated levels.

While the 2014 compliance period rules have yet to be finalized, two scenarios continue to be examined to analyze how compliance will take place for the 2014 year. Under the lower mandate levels outlined in EPA’s proposed rule for 2014, it looks like another significant surplus of RINs will be available for compliance in both the advanced and renewable mandate categories. Up to 1 billion advanced RINs could be available for carry-over into 2015, while the surplus of D6 RINs could exceed 2.46 billion gallons. Under the statutory mandates, available advanced RINs would fall just short of compliance needs indicating no carry-over available for 2015. The statutory renewable component could still be met with available D6 RINs while also providing a surplus of approximately 750 million in carry-over for 2015.

Note that while these estimates imply that compliance with the statutory mandates in 2014 may be feasible, it would require the use of RIN stocks carried over from previous years for both the advanced and mandate components, and imply RIN carry-in for 2015 at a lower level than has been experienced since the system was established. The implication of this would be much less flexibility for obligated parties in terms of mandate compliance in 2015 and future years (see farmdoc daily February 19, 2005 for more discussion). In such a scenario, the costs of compliance would be much more sensitive to issues such as the ethanol blend wall as well as the potential impact of a short corn crop similar to what was experienced during the drought of 2012.

Irwin, S., and D. Good. "What if the EPA Implements RFS Mandates for Renewable Fuels at Statutory Levels?" farmdoc daily (5):31, Department of Agricultural and Consumer Economics, University of Illinois at Urbana-Champaign, February 19, 2015.