Today’s post provides a mid-year update on Renewable Identification Number (RIN) generation in 2015 based on available data from EPA’s EMTS through June. In June, the EPA released a proposed rule for the Renewable Fuel Standard for calendar years 2014, 2015, and 2016. For 2014, EPA is proposing to set standards at the levels of renewable fuels that were “actually used” in 2014. The targets for 2015 and 2016 were set to “drive growth in renewable fuels”. Previous posts provided more analysis of the proposed mandate volumes and their impact on the biofuels sector (June 3, 2015; June 11, 2015; June 17, 2015). This post focuses on RIN generation through the first half of 2015, and on the implications of the proposed rule on current estimates of RIN stock levels. Specifically, adjustments to the way in which RIN stock levels are estimated by following EPA’s approach to using Energy Information Administration (EIA) export data along with EMTS RIN generation data to arrive at net available RINs is highlighted. 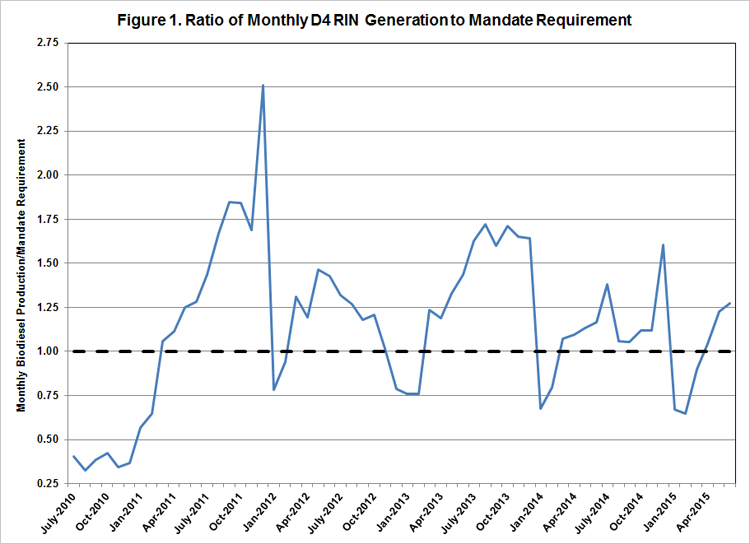 Nearly 1.226 billion D4 RINs have been generated in the first six months of 2015. Simply doubling this suggests that over 2.451 billion D4 RINs will be generated by the end of 2015. Note that this level of generation would fall short of being able to cover the proposed mandate level in 2015, resulting in the potential need for existing D4 RIN stocks.

However, assuming generation of D4 RINs keeps pace with May and June levels through the end of the year (~265 million RINs/month) would imply total D4 RIN generation in 2015 of more than 2.8 billion. This level would be sufficient to meet the entire non-cellulosic advanced mandate level of 2.794 billion RIN gallons (2.9 total advanced less 106 million cellulosic) proposed for 2015, which includes the portion of the advanced mandate which can be met with D5 RINs.

After averaging just 4.8 million per month in the first quarter of 2015, generation of D5 RINs jumped to over 15.3 million in April. Generation fell back to roughly 4.7 million RINs per month in May and June. Through the first half of the year, more than 39 million D5 RINs have been generated. Assuming 5 million gallons per month through the end of the year, 2015 D5 RIN generation would reach approximately 70 million, adding to the total of advanced RINS available for 2015 compliance.

Generation of D6 RINs has been relatively steady in 2015, ranging from 1.1 to 1.27 billion gallons per month. Through the first half of the year, a total of 7.262 billion D6 RINs have been generated, suggesting that more than 14.5 billion will be generated in 2015. This level of generation would provide sufficient D6 RINs for compliance with the 13.4 billion gallon proposed mandate level in 2015, while also allowing for the potential for over 1 billion gallons of ethanol exports and other non-compliance use. However, the issue of the blend wall remains which is why the proposed mandate levels have been referred to as a “push” for the industry even though they represent considerable reductions from the original statutory mandate levels. 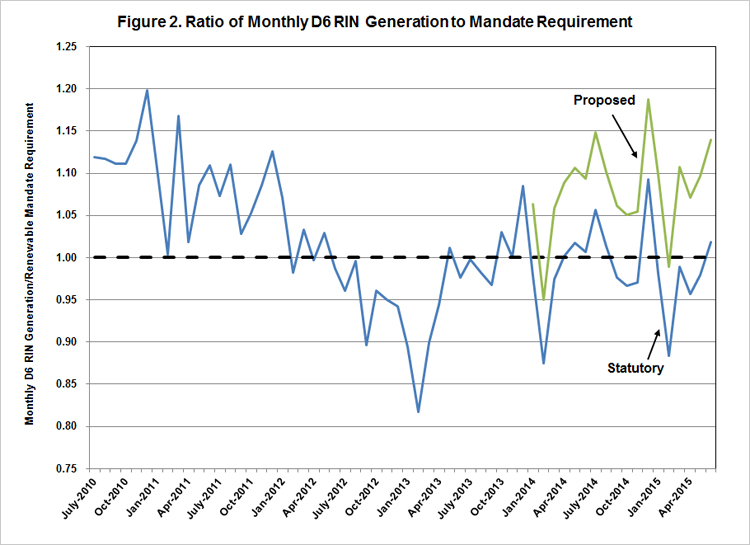 Table 1 summarizes RIN generation and use in 2014 using data from EPA’s EMTS and ethanol and biodiesel export data from EIA. This represents a change in methodology to estimating RIN stocks used in previous daily posts. While EMTS does report RIN retirements for export purposes, EPA explained in their proposed rule that export retirements are not fully reported in this system until the compliance period ends. Therefore, EIA export estimates are used to adjust the retirement of RINs representing renewable fuels not blended domestically and thus not available for compliance purposes. 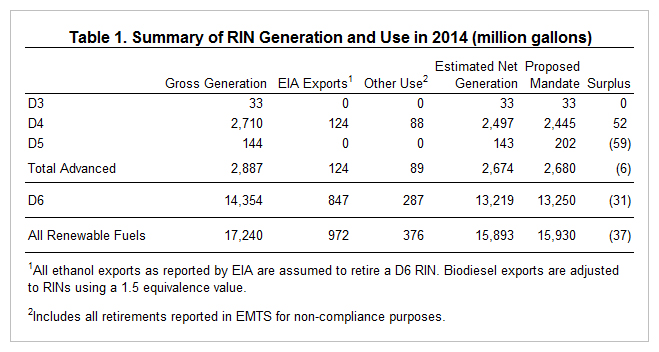 Gross generation values as reported in EMTS are shown across all D-code classes. Export numbers are taken directly from EIA reports. Other RIN use is the sum of all retirements for each D-code for purposes other than annual compliance use as reported in EMTS. Estimated net generation is then equal to gross RIN generation less RIN-equivalent exports and other uses. This value represents an estimate of the quantity of RINs in each D-code that will ultimately be available for use toward 2014 mandate compliance, or renewable fuels that were blended or “actually used” in 2014. These estimates are very close to those reported in EPA’s proposed rule which were used to set the currently proposed mandate levels for 2014.

Note that these estimates imply that existing RIN stocks will be virtually unchanged by 2014 compliance requirements. EPA estimates that RIN stocks currently total 1.8 billion gallons. My most recent estimate of 2014 beginning RIN stocks was at a very similar level of 1.875 billion. This total would be comprised of 536 million RINs eligible for the advanced mandate component (i.e. D4 or D5 RINs) and 1.339 billion eligible for the renewable component (i.e. D6 RINs). See the August 6, 2014 post for additional detail on this estimate of beginning RIN stocks for 2014.

Extending the steady pace of D6 RIN generation experienced thus far in 2015 through the end of the year was shown to yield an estimate 14.5 billion D6 RINs. This would be sufficient for compliance with the 13.4 billion gallon renewable component mandate in 2015, assuming ethanol exports are at or below 850 million gallons for the year while also allowing for other RIN use of around 250 million gallons for non-compliance purposes. This would represent export and other use levels similar to what was experienced in 2014. However, this would require the industry pushing past the ~13.1 billion gallon ethanol blend wall by selling additional fuel gallons at higher blend rates such as E85. Alternatives include the use of existing RIN stocks, or additional use of non-ethanol renewable fuels such as biodiesel.

Assuming the ramp up in D4 generation over the past few months continues through the end of the year, and extending the current pace of D5 generation, approximately 2.9 billion advanced RINs could be generated in 2015. With 2.794 billion D4 and D5 RINs needed to comply with the proposed non-cellulosic advanced mandate in 2015, biodiesel exports and other non-compliance use cannot exceed roughly 100 million gallons for the year without the need for advanced RIN stock use.

The RFS mandate levels for 2014 in the EPA’s proposed rule imply that RIN stock levels will remain relatively unchanged at around 1.8 billion gallons after 2014 compliance. The pace of RIN generation observed through the first half of 2015 suggests that RIN stock levels could hold steady again during the 2015 compliance period. This does assume that ethanol and biodiesel export levels do not increase beyond 2014 levels, and would require domestic ethanol use above the estimated blend wall level in 2015. The validity of these assumptions will be explored in an upcoming daily post.

Coppess, J. "EPA Doubles Down on Questionable Reading of the RFS Statute." farmdoc daily (5):108, Department of Agricultural and Consumer Economics, University of Illinois at Urbana-Champaign, June 11, 2015.