In the June 4, 2015 farmdoc daily article, “Current Corn, Soybean, and Wheat Prices in Long Term Perspective,” (Zulauf, 2015) I wrote that “While historical trends do not always hold, absent strong arguments to the contrary, the default position is that real U.S. crop prices are likely to trend lower. More succinctly, unless general price inflation increases, supply growth declines, or multiple year global supply disruptions occur; the question is not if but when will corn crop year average price average below $3 and push toward $2.” This article extends this examination by looking at the trends in real cash cost per acre of producing corn, soybeans, and wheat since 1975, the first year cost data for the U.S. are available. This cost declined for each of the three crops until the period of farm prosperity began in 2006. Declining real cash costs both cushions the decline in real prices by mitigating its impact on profit margins but also furthers the decline in real prices by mitigating the incentive to reduce supply.

Data: Cost of production and yield are from the U.S. Department of Agriculture, Economic Research Service “Commodity Cost and Return” data. Data exist for the 1975-2014 crop years. A major change in methodology occurred in the late 1990s. Cash costs were reported prior to but not after this change. Cash costs after the change are calculated by adding to operating costs, the cost of hired labor, taxes and insurance, and general farm overhead. Cash costs per bushel are divided, i.e. deflated, by the GDP implicit deflator, which is considered to be the most accurate measure of inflation for a country. Source for the GDP deflator is the FRED data set maintained by the Federal Reserve Bank of St. Louis. The GDP deflator is indexed to its 2014 value. 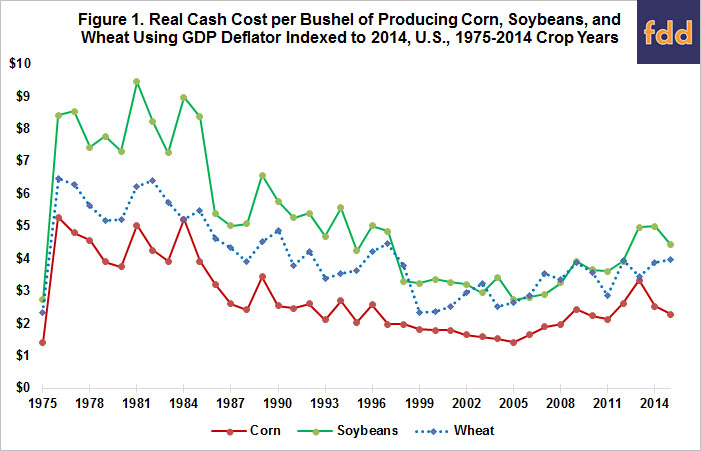 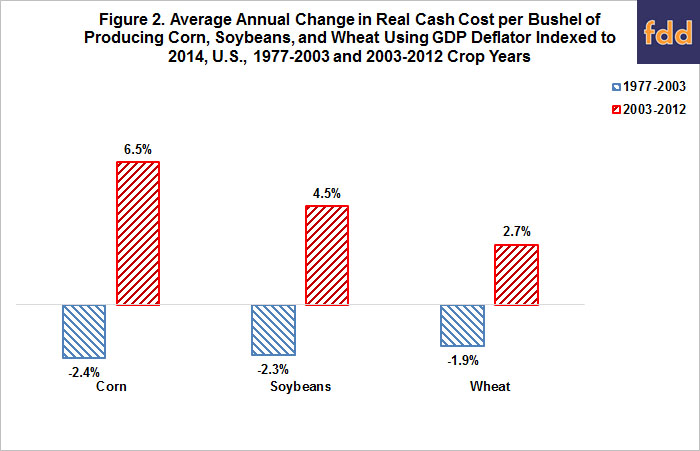 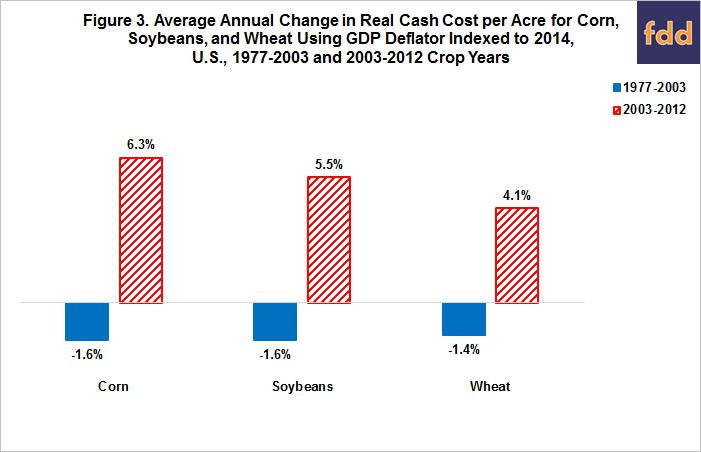 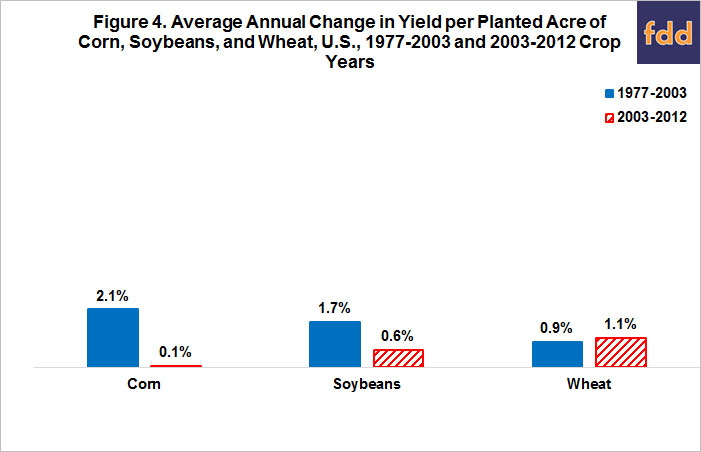 Real cash cost of producing a bushel of corn, soybeans, and wheat is lower now than during the late 1970s, even with the increase during the recent period of farm prosperity.

Examination of real cash cost during the period of prosperity lifts up the role of a factor not often discussed about this period, the relatively slow growth in U.S. corn and soybean yields. The slow growth put upward pressure on crop prices and returns, then on input prices and cash cost of production. While it is possible that long term yield growth has slowed, this observation most likely underscores the importance of deviations from long term yield trends that can last several years.

As noted in the June 4, 2015 farmdoc daily article, historical trends may not hold but do suggest a default position absent strong arguments to the contrary. Specifically, history suggests real per bushel U.S. cash cost of producing corn, soybeans, and wheat is likely to trend lower in the future.

In addition, the decline in natural gas prices, both in real and current dollars, (Irwin, November 13, 2015) is likely to put downward pressure on farm input prices, especially nitrogen fertilizer prices.

Lower per bushel cash cost of production allows crop price to decline even more since the lower cost dampens the supply response to lower price. Moreover, if cash costs per bushel decline faster than crop price, supply will expand, further reducing prices, everything else constant.

In a period of declining real prices, a key managerial objective is to reduce real cash cost of production faster than real price declines. The historical evidence in this study suggests a managerial goal of reducing real cash cost per bushel by 2% per year on average, or approximately the decline observed between 1977 and 2003. If prices do not decline, then achieving this goal will leave the farm in even better shape.

In an era of low general economic inflation, such as the current era; the per bushel cash cost of production in current dollars can decline. Thus, the preceding managerial goal would be slightly restated as, decrease current dollar cash cost per bushel by 2% per year.

CAVEAT: This article is not a forecast for near term crop year prices and costs, including 2015/2016. Short term factors, such as weather aberrations both in the U.S. and around the world, can override long term trends. However, long term trends determine the currents in which short term factors operate. Effective management starts with understanding and continually monitoring the longer term currents.