The FAST ARC-CO PLC Payment Estimator has been updated to include 2015 National Agricultural Statistical Service (NASS) yields. By using these yields, accurate estimates of 2015 Agricultural Risk Coverage – County Option (ARC-CO) payments for 2015 can be obtained. While variability in payments exist across counties, ARC-CO payments are likely in many counties in 2015 and 2016.

Figure 1 is the main page of the ARC-CO PLC Payment Estimator. It is a Microsoft Excel spreadsheet available for download on the farmdoc website (Mark, provide linkage). Users of the tool select a state, county, crop, and type in the main input box. In Figure 1, the selection is for corn in LaSalle County, Illinois. For this county, the type selection is “all.” In contrast, some counties have two type alternatives: irrigated and non-irrigated. The Payment Estimator provides payment estimates for all county-crop-type combinations for which data is available from the Farm Service Agency. Actual payments are available for 2014. Payment estimates can be obtained for 2015 through 2018. 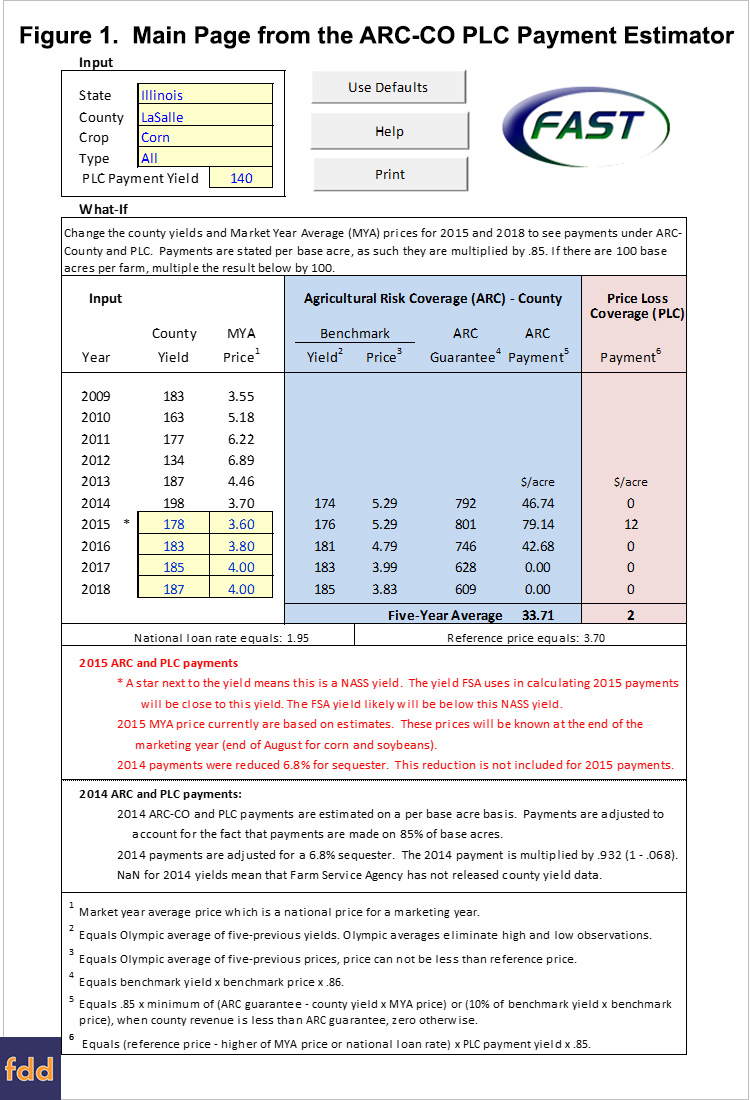 The estimated payment for the 2015 crop year for corn in LaSalle County is $79.14 per acre (see Figure 1). This value is based on a 178 bushel per acre county yield. The 178 bushel per acre yield comes from NASS, as is indicated by the “*” next to the 2015 yield estimate (see Figure 1). Where available, FSA uses NASS data in calculating its final yields, but supplements NASS data with RMA data (see farmdoc daily, December 1, 2015). Almost always, the yield FSA uses in calculating ARC-CO payments will be the same or below the NASS yield. In the middle of the Corn Belt, differences between NASS and FSA yields typically are less than a bushel per acre. If NASS does not provide data for county, a “*” will not appear next to the 2015 yield and a trend estimates of 2015 yield is used in the Payment Estimator. Without NASS data, a yield estimate in the Payment Estimator are not very accurate.

The MYA price used in 2015 payment estimates is $3.60 per bushel, the current midpoint of the World Agricultural Supply and Demand Estimates (WASDE) range. The marketing year is not over, and the MYA price is not known with certainty. Marketing years for corn and soybeans will end at the end of August 2016. However, the potential for price change is diminished by the fact that the corn and soybean marketing is now 5/12 completed.

The payment estimates for 2016 are subject to change since FSA yields may differ from yield estimates in the Payment Estimator and the marketing year is not over. Payments for the 2015 crop year will not be made until after October 1, 2016. Maps of estimated 2015 corn and soybean payments are available in a recent article (farmdoc daily February 23, 2016).

A 2016 crop year payment estimate by ARC-CO also is shown in the Payment Estimator. These estimates are useful for individuals preparing budgets and rental bids for farmland in 2016. The 2016 payments will accrue to those individuals with a share in 2016 production.

In Figure 1, the 2016 ARC-CO estimate is $42.68 based on a 183 bushel per acre yield and a $3.80 price. The 2016 projected yield is a trend estimate of yield. Obviously little is known about 2016 growing conditions and prices and yields can change from current estimates. As a result, the 2016 payment will vary from that shown in the Payment Estimator. Payments for the 2016 crop year will not be made until after October 1, 2017.

Figure 2 shows 2016 estimates of ARC-CO payments for Illinois counties for corn based on a $3.80 price and trend yields. As can be seen, payments vary across counties with high payments of over $60 per base acre in some counties and no payments in other counties. The difference in payments across counties is a reflection of a number of factors, with the most prominent being the yields from 2009 through 2015 used to estimate the benchmark yield for ARC-CO. The higher the benchmark yield, the higher the ARC-CO guarantee, leading to higher ARC-CO payments. 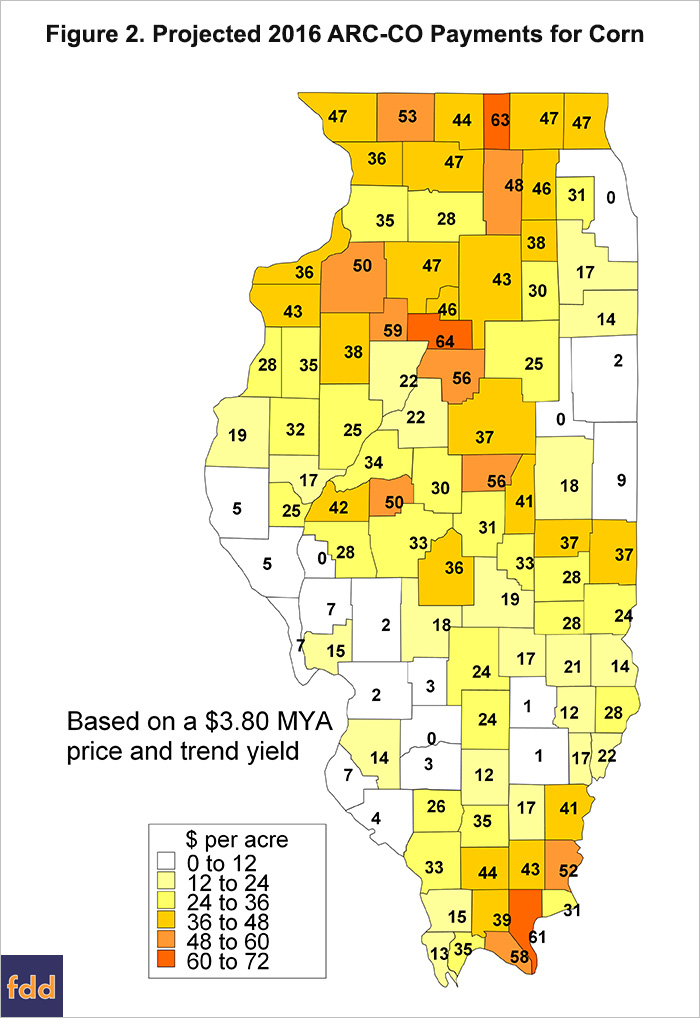 Projected 2016 ARC-CO payments by Illinois counties for soybeans are shown in Figure 3. Estimates are made using a $9.20 MYA price and trend yields. As can be seen, payments estimates vary across counties. 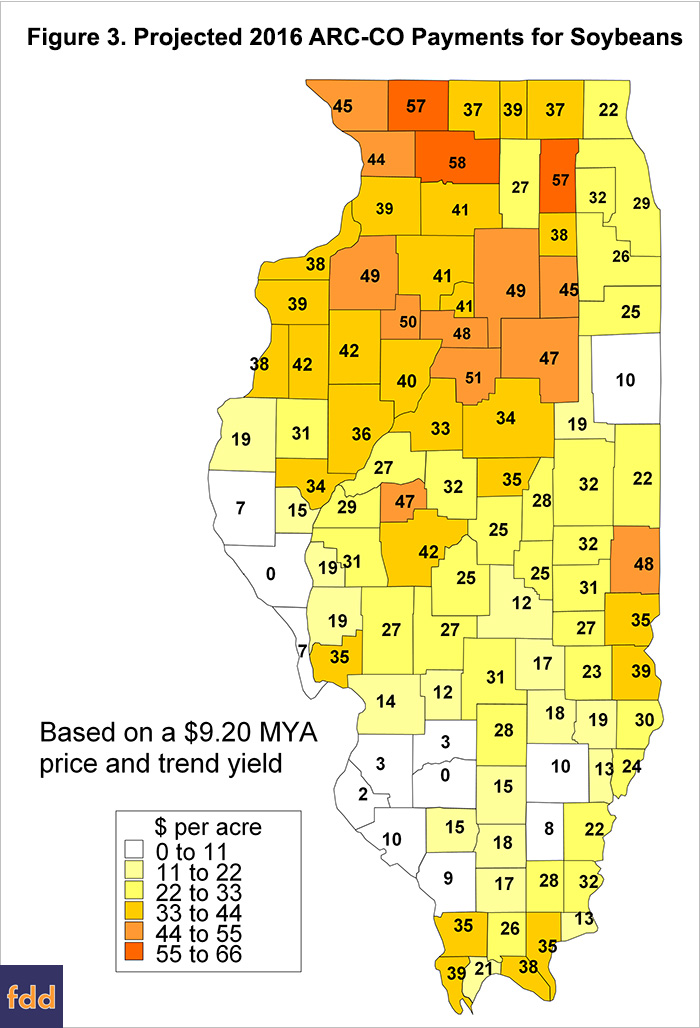 Payments in 2016 will vary from those shown in Figures 2 and 3. While estimates, these payments do illustrate several points: