In the farmdoc daily article of November 2, 2016 we started a series of articles that evaluate the history of corn and soybean yields and deviations from trend yield in Brazil and Argentina. The objective of the yield analysis is to provide a basis for forming expectations about the likely yields of the 2017 crops. The article of November 2nd focused on the alternative sources of historical yield estimates and the selection of the appropriate series to use in the analysis. We selected the yield estimates provided by the USDA’s Foreign Agricultural Service (FAS) as the most appropriate estimates. The farmdoc daily article of November 9, 2016 used the average corn yield estimates, not adjusted for varying weather conditions from year-to-year, for the period 1961 through 2016 to determine the form of the trend that best fits those yield estimates and to calculate the trend yield for 2017. That analysis revealed that corn yields in both countries have trended higher over time, with a logarithmic trend rather than a linear trend, providing the best fit of the actual yield estimates. That is corn yields have increased at a constant percentage rate rather than a constant bushel per acre rate.

Figures 1 and 2 show the annual soybean yields in Argentina and Brazil, respectively, for the period 1978 through 2016. Yields have obviously trended higher over time, as is the case for the U.S. We have previously argued (most recently in the farmdoc daily article of March 9, 2016) that a linear trend is the best fit to actual average yields for the U.S. beginning in 1960. As shown in Figure 3, a linear trend also appears to be the best fit to actual yields for the period from 1978 through 2016. During that period yields increased by an average of 0.48 bushels per acre per year, implying that yield increases in percentage terms have declined over time as yields have increased. Trend explained nearly 81 percent of the annual variation in yields over that 39 year period. The very high yield in 2016 may indicate that the specification of the soybean trend model for the U.S. should be revisited. However, more data will likely be required before reaching a firm conclusion (farmdoc daily, October 25, 2016). 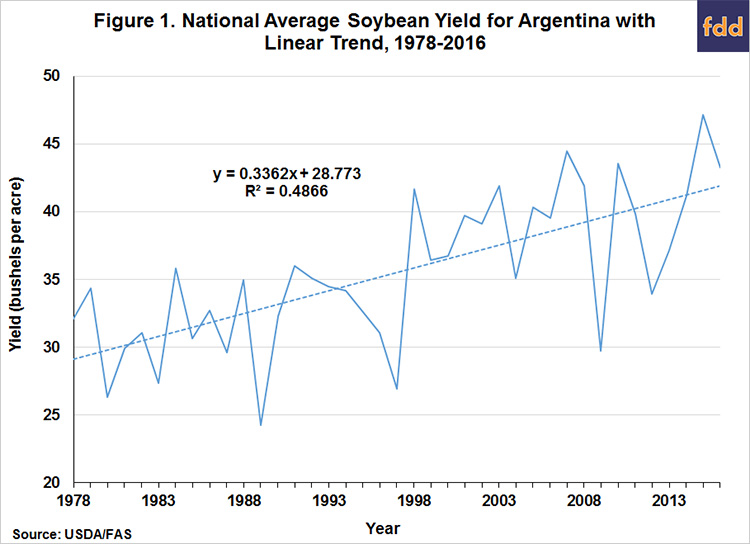 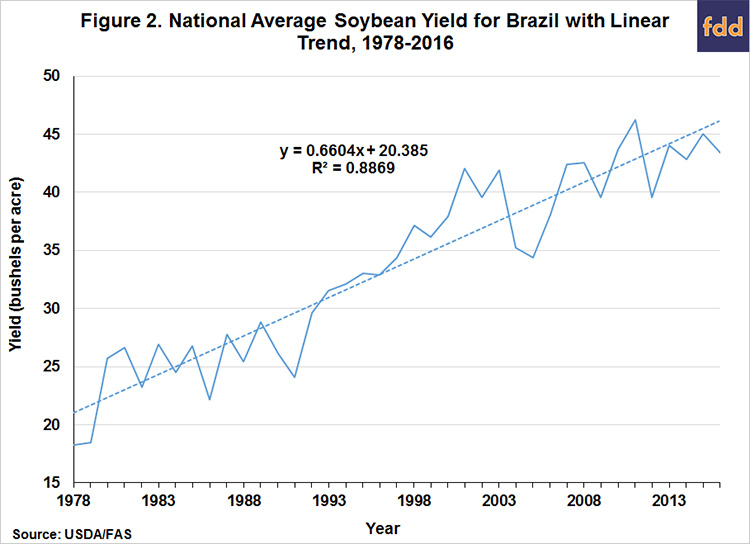 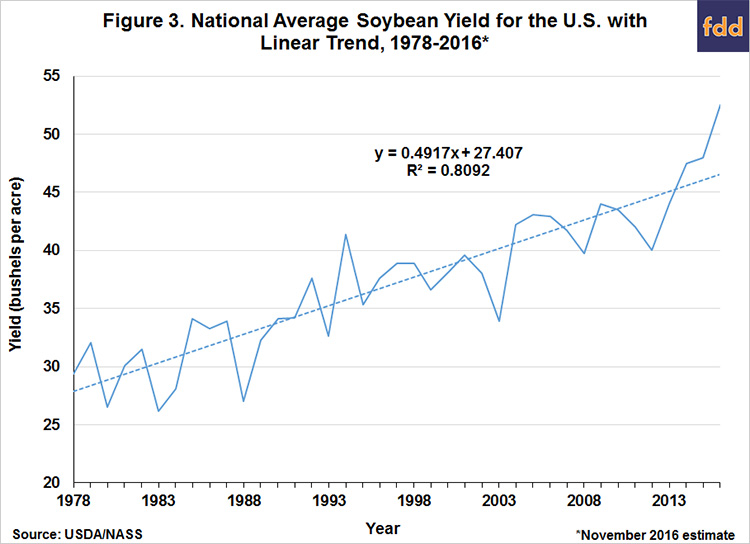 A linear trend also appears to be the best fit to actual yields in Argentina and Brazil. The linear trends indicate annual average yield increases of 0.34 bushels for Argentina and 0.66 bushels for Brazil. A linear trend explains about 89 percent of the annual variation in actual yields in Brazil, but only about 49 percent of the annual yield variation in Argentina. The soybean yield pattern in Argentina has been very different from that of the U.S. and Brazil. While yields have trended higher in Argentina, the deviations from the unconditional trend values have tended to be larger than the deviations in either the U.S. or Brazil so that trend explains a much smaller portion of the annual yield variation. We have not examined the possible contributors to the larger deviations, but speculate that the large deviations reflect the more concentrated area of production in Argentina than in either the U.S. or Brazil. For some perspective on production concentration, see these production maps for Argentina, Brazil, and the U.S.

It should be noted that the projections are based on “unconditional” trend regression estimates that are known to result in a slight under-estimate of trend yield due to the asymmetric effect of weather on actual yields (Swanson and Nyankori, 1979; Tannura, Irwin, and Good, 2008). That is, poor weather reduces yields more than good weather improves yields so that the impact of technology (trend) is under-estimated due to sharp reductions in yield from poor weather years. (For those with a statistical bent this is more formally known as an omitted variables bias). Our previous research on U.S crop weather models that adjust for the asymmetric effect of weather on crop yields indicates the downward bias is about 0.02 of a bushel for the trend coefficients (Irwin, Good, and Tannura, 2009). Adjusting for this bias would add roughly 0.1 to 0.2 bushels per acre to our trend estimates for Argentina and Brazil. However, we do not make this adjustment, as we do for the U.S., because we have not estimated crop weather models for soybean yields in Argentina and Brazil.