Today’s article provides the first quarterly update on RIN generation for 2017. Generation figures and projections are based on available data from EPA’s EMTS through March of 2017, with annual projections compared with the target mandate levels outlined in the final rulemaking for 2017. The previous RIN update (April 12, 2017) provided summary estimates for 2016.

Today’s article also provides revised estimates of annual beginning RIN stock values from 2013 through 2017, with updates based on compliance data now provided through the EMTS system. Updated RIN stock levels for 2014 to 2016 are below those previously released (March 3, 2016) due to net compliance requirements over that time frame being higher than the volumes implied by the targeted mandate volumes. This is due to actual domestic gasoline and diesel fuel use surpassing the EIA projections upon which the RVO’s are based to meet the volumetric mandate targets.

Through March, a total of 32.6 million D3 RINs have been generated, an average pace of nearly 10.9 million per month. This implies total D3 generation for the year will reach just over 130 million RINs, falling well short of the 311 million gallon mandate level for 2017.

Figure 1 plots monthly D4 RIN generation relative to implied monthly mandate needs (annual mandate divided by 12) using data from the EMTS through March 2017. Gross generation of D4 RINs have averaged nearly 219 million per month during the first quarter, suggesting total generation for the year of 2.75 billion D4 RINs. While this would fall short of the 3 billion RIN (2 billion volumetric gallons) biomass-based diesel mandate target, first quarter projections can vary significantly from actual generation for the full year. This is particularly true for D4 RINs, where generation has typically increased later in the year.

Gross generation of D5 RINs has averaged close to 5.2 million per month through March, totaling 15.5 million for the first quarter. This implies projected annual generation of just over 186 million D5 RINs. Combining the D3, D4, and D5 RIN generation projections results in a total estimated gross generation of just over 3 billion advanced RINs in 2017. Generation rates among the advanced categories will need to increase during the last three quarters of 2017 to be able to meet the target mandate requirement of 4.28 billion RIN gallons for advanced biofuels. 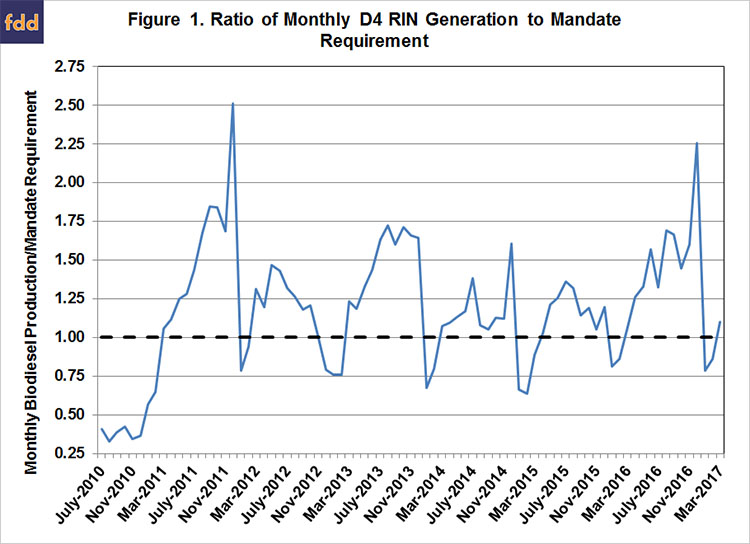 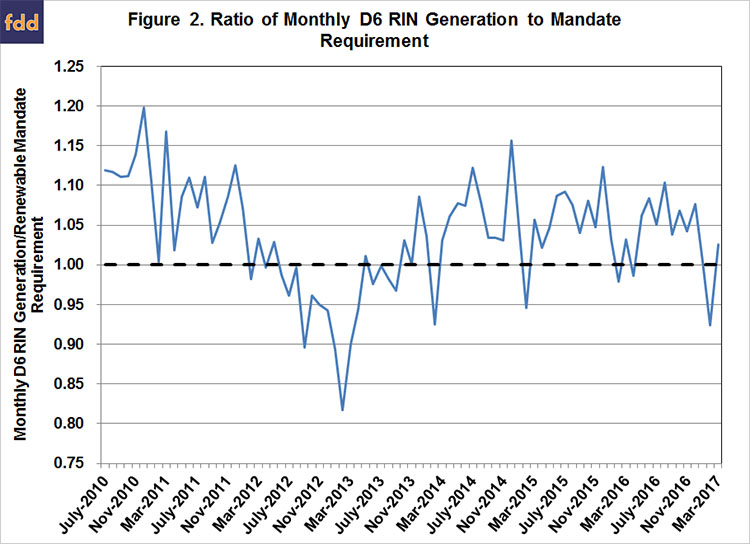 The EMTS system now also provides additional compliance data, covering up through the 2015 compliance period. As a reminder, the RFS volume mandates published in the EPA’s final rulemaking for compliance years should be viewed as targets. The implementation of those mandates is done at the individual obligated party level, where the EPA sets percentage standards for blending based on gasoline and fuel use estimates from the EIA. If actual fuel use varies from those projections, the effective mandate levels resulting from the percentage standards will vary from the published mandate targets. 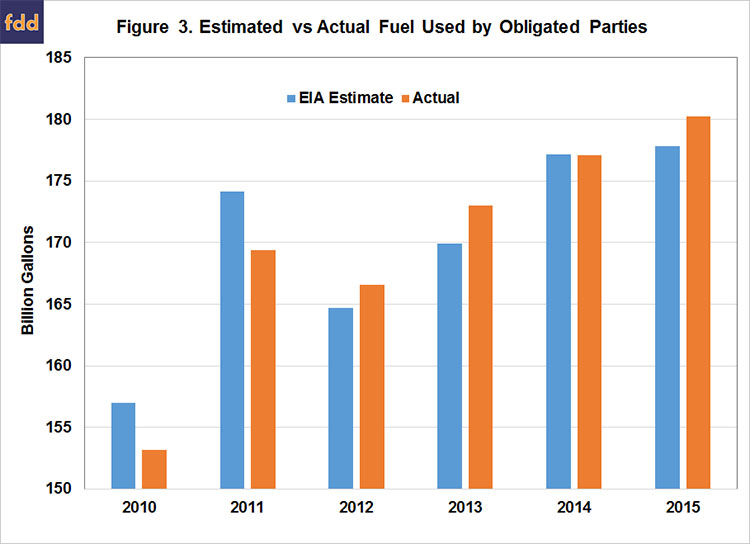 Previous RIN stock estimates published here (March 3, 2016) have been based on the target mandate volumes. With the availability of actual compliance data, these estimates have been revised to reflect the actual RVO levels for obligated parties each year. Table 1 reports these revised beginning stock estimates for 2013 through 2017.

Table 1 also reports an estimated beginning stock level for 2017. Stocks were estimated to increase by just over 500 million RINs during 2016. This is driven primarily by net generation of D4 RINs (3.8 billion) exceeding the target mandate (2.85 billion) by over 950 million RIN gallons in 2016. Note that because of the 20% rollover limit provision, a portion of these excess D4 RINs is assumed to be “demoted” for use as D5 or D6 RINs, showing up in those stock categories in table 1.

Note that this estimate is still based on EMTS (generation and non-compliance retirements), EIA biodiesel and Department of Commerce denatured ethanol exports, and the target mandate levels for 2016. Compliance for 2016 has not yet been finalized, so actual RVO data for 2016 is not yet available. Thus, the estimated increase in stock levels to over 2 billion RIN gallons assumes that fuel use during 2016 closely matched the EIA projections upon which the RFS percentage standards were based. Deviations of actual fuel use from those projections will lead to further revisions of the 2017 beginning stock estimate.

Data on RIN generation from EPA’s EMTS through the first quarter of 2017 suggests the pace of generation will need to increase for obligated parties to be able to meet target mandate volumes for the year. However, estimates based on data through the first quarter have not historically been reliable, as the pace of RIN generation can fluctuate and typically picks up in the later part of the year. The next 2017 RIN update will incorporate non-compliance retirements and ethanol and biodiesel export data to begin to formulate net generation projections for 2017.

Using actual compliance data now provided in EMTS, revised historical RIN stock estimates were also provided. With actual fuel use exceeding EIA projections in 2013 and 2015, revised stock estimates are 300 million RINs lower for 2014 and 2015, and 500 million RINs lower for 2016. The size of these revisions is fairly significant, and suggest a lower level of flexibility for obligated parties in meeting mandate requirements in current and future compliance periods.

The first estimate for 2017 beginning RIN stocks is larger, at just over 2 billion RINs. The increase in estimated RIN stocks during 2016 is based mainly on high generation of D4 RINs during the year. This estimate will likely be revised in the future once the actual RVOs are made available with the 2016 compliance data.