Recent wet, cool weather has raised concerns about delays in planting, which could then lead to a switch in planting from corn to soybeans. From an economics standpoint, the decision to switch to soybeans likely will be dictated by how much nitrogen fertilizer has already been applied, given that already applied pesticides allow a switch to soybeans.

While planting concerns exist, statistics released in May 8th reports by the National Agricultural Statistical Service (NASS) suggest that planting progress so far in 2017 is near five-year averages:

When planting again resumes, a decision to plant corn or soybeans may be faced. As has been noted previously, prices and costs earlier in 2017 suggested that planting soybeans will be more profitable than planting corn (see farmdoc daily, December 6, 2016, and farmdoc daily, April 4, 2017). So far this growing season, prices have not changed these expectations: soybeans are expected to be more profitable than corn. As later planting occurs, expected corn returns will decrease more than expected soybean returns because expected corn yields decrease more than expected soybean yields with late planting. Hence, comparison of all costs likely suggests planting soybeans.

However, the decision to switch from corn to soybeans should be influenced by pesticides and nitrogen fertilizer already applied. If certain herbicides have been applied, the ability to switch to soybeans may not exist. If switching is an option, then the amount of nitrogen remaining to be applied will influence decisions. Nitrogen already applied is a sunk cost and should be excluded when making comparisons between expected corn and soybean returns.

The impact of applied nitrogen is illustrated for Central Illinois, high-productivity farmland using the “returns by planting date” sheet in the Planting Decision Model, a FAST spreadsheet available for download from the farmdoc website. The example is for central Illinois, with inputs shown in Appendix A. The example has a maximum expected yield of 203 bushels per acre, which decreases after April 20th. Yield on May 13th is expected to be 196 bushels per acre. The maximum soybean yield is 61 bushels per acre. Yields decrease from this 61 bushel per acre maximum after April 27th. The expected yield for a May 13th planting is 59 bushels per acre. Total non-land costs are $507 per acre for corn and $335 per acre for soybeans. The non-land costs for corn include a $53 per acre cost for nitrogen fertilizer. The amount of nitrogen left to be applied will be varied below. Assuming that $40 remain to be applied means that roughly $13 of nitrogen already has been applied. Reported below are returns before land costs. 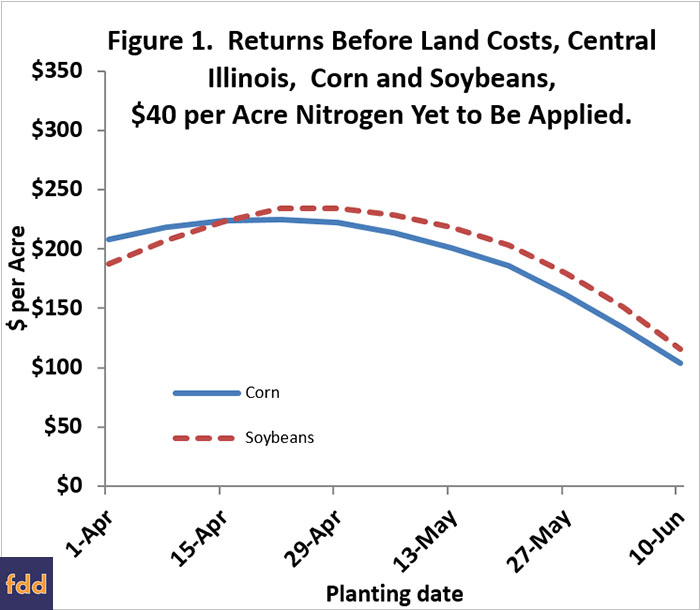 Figure 2 shows returns given that $0 per acre of nitrogen needs to be applied. This situation could be a full application of nitrogen during the previous fall. In this case, corn is always expected to be more profitable than soybeans no matter the planting date. 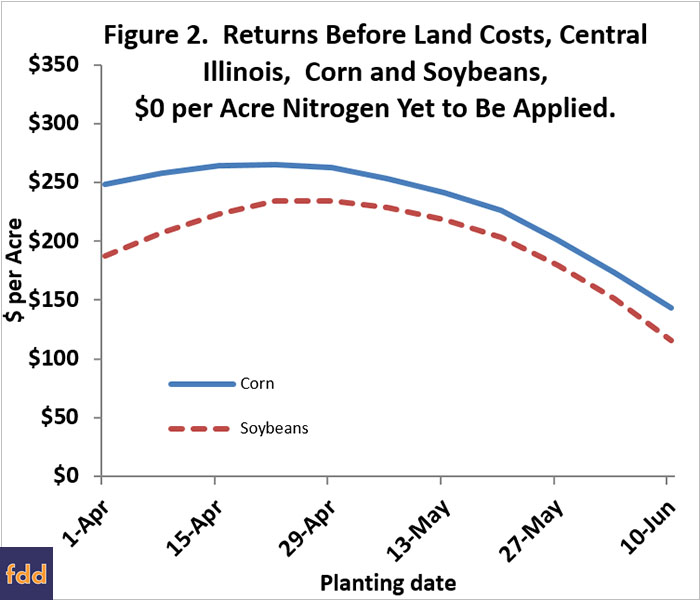 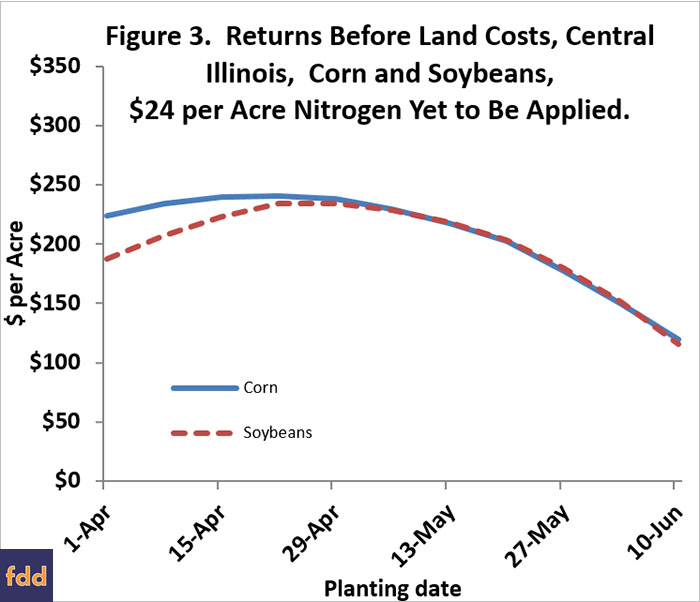 Already applied nitrogen will influence the economics of a switch from corn to soybeans. Having higher levels of nitrogen already will cause return comparison to more strongly suggest planting corn. The above analysis is for central Illinois. Comparisons will vary from those above for different regions.

Schnitkey, G. "2017 Break-even Prices for Corn and Soybeans to have the Same Profitability: Revisited." farmdoc daily (7):61, Department of Agricultural and Consumer Economics, University of Illinois at Urbana-Champaign, April 4, 2017.