The U.S. Environmental Protection Agency (EPA) announced the proposed rulemaking for the Renewable Fuels Standard (RFS) for 2018 and the biomass-based diesel volume requirement for 2019 on July 5th. In this article, we analyze the expected outcome of implementing the newly announced mandates. These standards were generally as expected, with exception of the total advanced biofuels mandate which was a bit smaller than anticipated. The focus of the present analysis, then, is on the magnitude of the “push” in production and consumption of biofuels above the E10 blend wall implied by the requirements (mandates) of the RFS and the implications for production and consumption of biomass-based diesel. The analysis follows a similar format of our previous analysis of earlier EPA rulemakings, most recently in the farmdoc daily articles of May 26, 2016, June 2, 2016 , and November 30, 2016.

The statute for the Renewable Fuels Standards (RFS) required the U.S. Environmental Protection Agency (EPA) to establish volume requirements for four categories of biofuels for each year from 2008 through 2022: cellulosic biofuel, biomass-based diesel, total advanced biofuel (which includes biomass-based diesel), and renewable fuel (referred to as conventional ethanol here). The difference between the total advanced mandate and the total of the cellulosic and biodiesel mandate is referred to as the undifferentiated advanced mandate and can be satisfied by a combination of qualified advanced biofuels. Conventional biofuels is generally assumed to be corn-based ethanol but this is actually not explicitly required by the RFS legislation. Instead, corn-based ethanol has been the cheapest alternative for this category that also meets the environmental requirements of the RFS. In addition, the conventional portion of the mandate can also be satisfied with discretionary blending of advanced biofuels, so one can refer to the conventional mandate as an implied mandate. We refer to this implied mandate as the conventional ethanol mandate in order to be consistent with the most common term for this particular RFS mandate. Cellulosic biofuels have been in very limited supply, so the EPA has written down the cellulosic mandate to very low levels relative to statutory levels each year. The total advanced biofuel mandate has also been written down in conjunction with the write down in the cellulosic mandate. The biodiesel mandate was established as a minimum of one billion gallons per year from 2012 through 2022, with larger amounts subject to EPA approval. 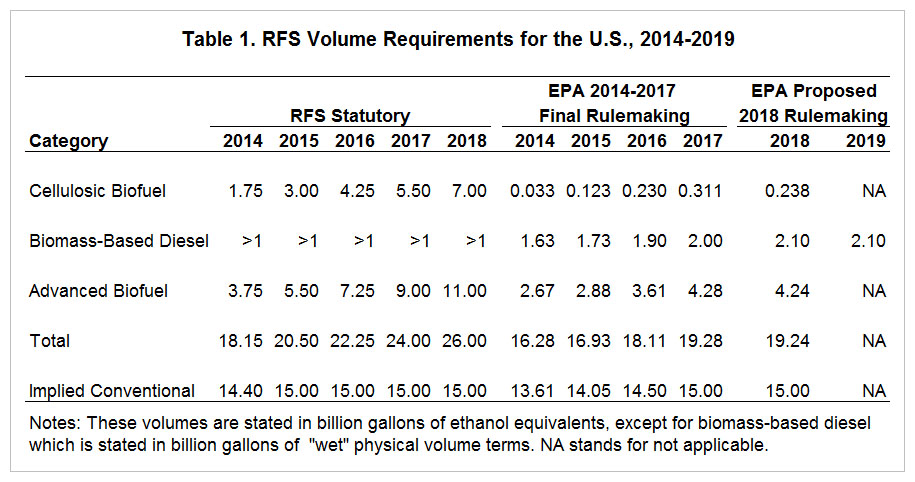 We start the analysis of the EPA proposed rulemaking with a computation of the magnitude of the “push” above the E10 blend wall in the production and consumption of conventional ethanol for each year from 2014 through 2018. The magnitude of the push is calculated as the gap (difference) between the EPA mandate as implemented and the actual or expected consumption of conventional ethanol. Those calculations are presented in Table 2. To understand the calculations, it is necessary to recognize that the mandate is not enforced as a strictly volumetric mandate, but instead is enforced as a fractional mandate. The EPA establishes the blend, or fractional, rate based on the volumetric mandate and a projection of petroleum-based gasoline and diesel consumption. Obligated parties, then, meet their obligations by blending at that established rate regardless of whether total gasoline and diesel consumption is more or less than the EPA projection. As a result, the magnitude of the final volumetric mandate is dependent on the actual magnitude of gasoline and diesel consumption. 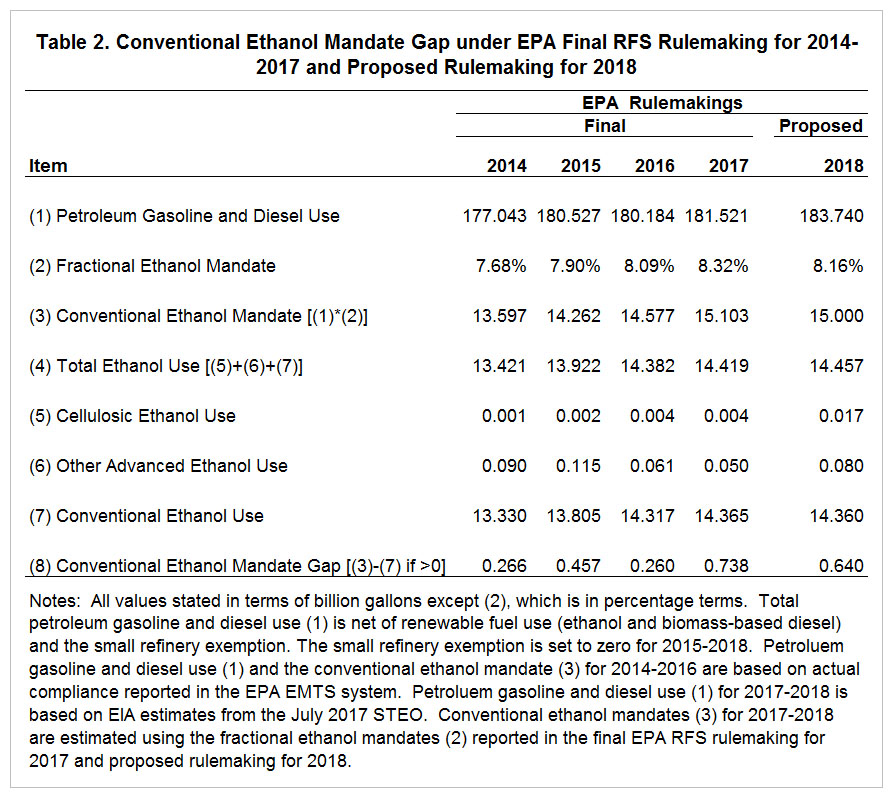 The estimates for 2017 in Table 2 require further explanation. We utilize the projection of calendar year petroleum gasoline and diesel use found in the July 2017 EIA Short term Energy Outlook (STEO) report, whereas the final 2017 rulemaking uses the October 2016 STEO. In addition, we do not make an adjustment for diesel fuel use for ocean-going vessels as the EPA does in all prior RFS rulemakings. This adjustment has been about 2.1 billion gallons in recent years. The reason we do not replicate this part of the EPA projections is that available data on final obligated gasoline and diesel volumes for 2014-2016 exceed that estimated by the EPA by approximately the estimate of ocean-going diesel use. It appears that obligated parties do not segregate out these volumes when reporting total obligated volumes even though they are technically not subject to RFS standards.

The calculations for estimating the advanced biofuels gaps from implementing the RFS mandates for 2014-2018 are shown in Table 3. The calculations follow the same methodology and data sources as used in Table 2. The calculation of the advanced gap for each year starts with the total advanced biofuels mandate as implemented for 2014-2016, estimated for 2017 based on the final rulemaking and July 2017 STEO projections, and proposed for 2018 based on the proposed rulemaking and July 2017 STEO projections. The advanced mandate gap is then calculated as the advanced mandate minus the cellulosic mandate, minus the biomass-based diesel mandate (multiplied by 1.54 in 2014 and 1.53 in all other years to convert wet gallons to ethanol equivalents), minus the actual/projected use of undifferentiated ethanol (Brazilian and domestic), minus the actual/projected use of undifferentiated non-ethanol biofuels. The actual advanced gap was zero for both 2014 and 2015, is projected at 900 million gallons for 2017, and 684 million gallons for 2018. 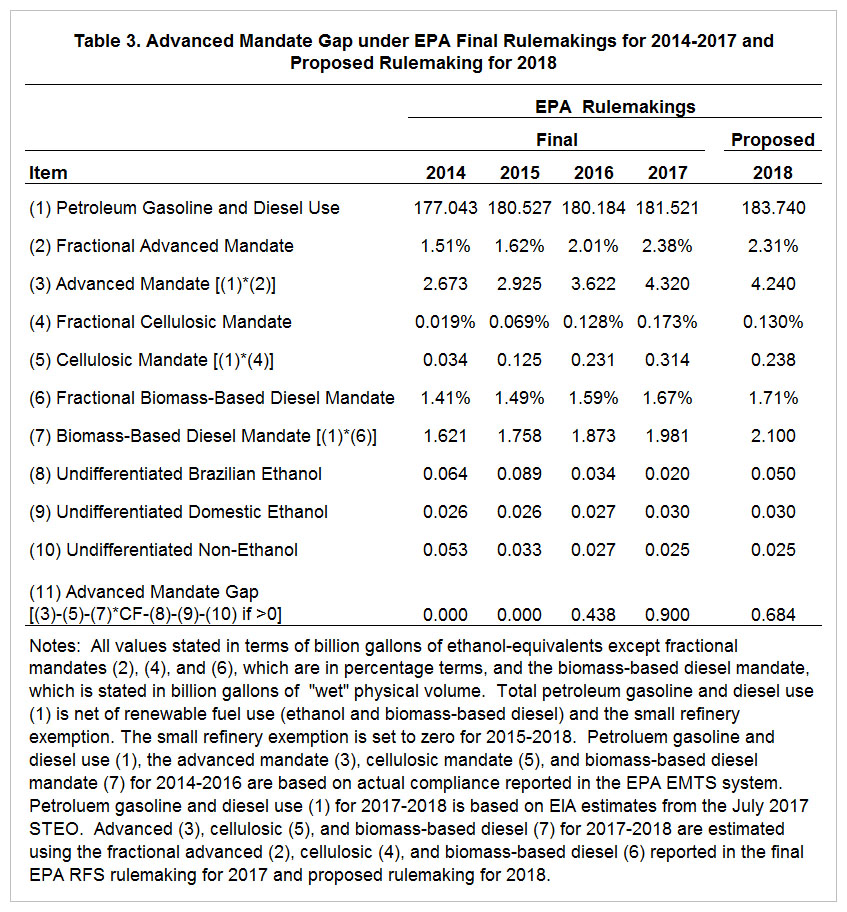 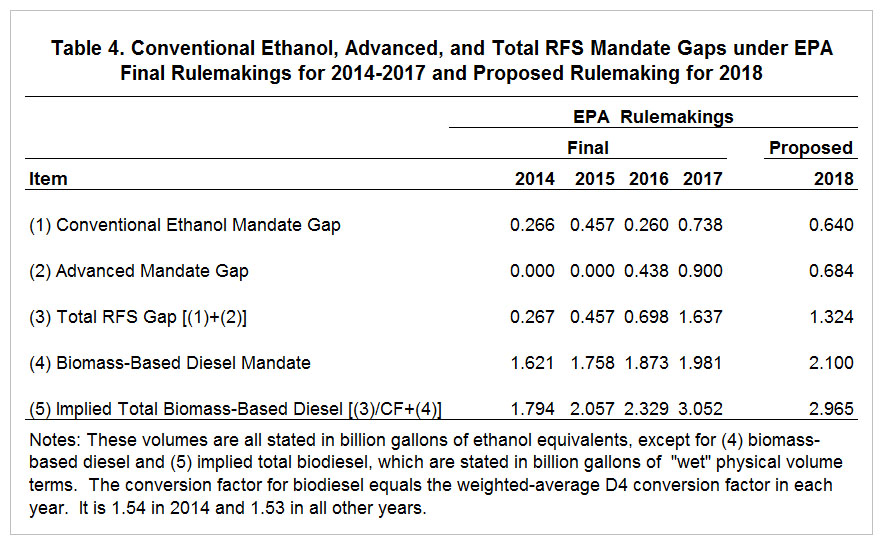 We will re-examine the implications of large levels of biodiesel production for world vegetable oil markets in an upcoming article.