The farm bill reported by the House Ag Committee and defeated on the House floor remains in a state of limbo (H.R. 2, Agricultural and Nutrition Act of 2018).  Among the changes to policy contained in H.R. 2 are significant changes to conservation policy and programs.  Specifically, the House Ag Committee eliminated the Conservation Stewardship Program (CSP) and increased funding to the Environmental Quality Incentives Program (EQIP).  With expectations for reconsideration of the House vote later this month, this article adds to the review of H.R. 2 by looking specifically at the potential impacts of these revisions to conservation policy.

CSP and EQIP are two of the largest programs in the conservation title of the farm bill, both in terms of acreage and spending.  They are considered “working lands” programs in that they provide direct assistance for conservation on land that remains in farming, as compared to a program like the Conservation Reserve Program (CRP) which rents acreage out of production for ten to fifteen years.  Working lands conservation programs are particularly important for natural resource challenges such as reducing nutrient losses from productive farm fields (see, farmdoc daily, April 7, 2016; March 17, 2016).  Figure 1 illustrates the Congressional Budget Office (CBO) Baseline estimates for outlays from these two programs during fiscal years (FY) 2019-2028 (CBO April 2018 Baseline).

In short, CSP provides financial assistance to farmers meeting threshold levels of conservation on the entire farm through a five-year contract.  In return for annual payments, the producer agrees to maintain current conservation practices and increase or improve conservation across the farm during the five years of the contract.  By comparison, EQIP provides direct financial assistance by sharing the cost of adding, maintaining or improving conservation practices.  Under current law, 60% of all EQIP funds are designated for livestock operations. 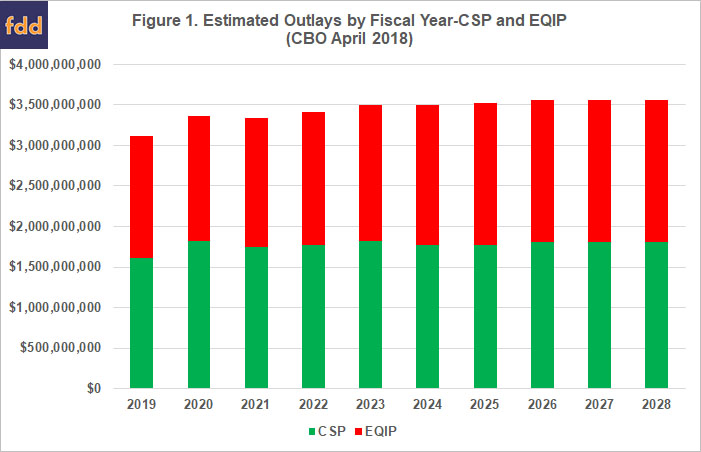 H.R. 2 proposes to eliminate CSP entirely, however, existing contracts would continue through the end of the respective five-year contractual term.  H.R. 2 also proposes increasing the funding for EQIP.  In addition to an increase in funding, H.R. 2 proposes that up to 50% of the funds available in EQIP are for new stewardship contracts; the remaining funds would be available for traditional EQIP cost-share assistance.  The 60% of funding for livestock operations is eliminated in H.R. 2.  Figure 2 illustrates CBO’s estimated changes in direct spending from these changes (CBO May 2, 2018). 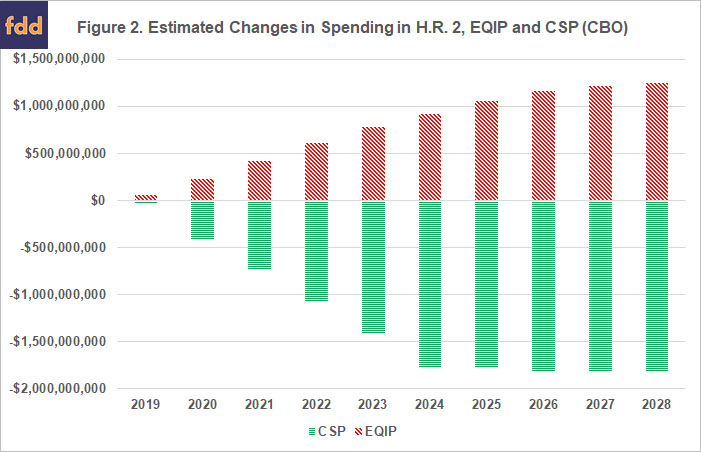 CSP is an acreage-based program; the 2014 Farm Bill required USDA to add 10 million acres to the program each fiscal year (through 2022) but manage the program to achieve a national average cost per acre of $18.  Acres were to be allocated to the individual states based on the State’s proportion of eligible land and consideration of conservation needs.  By comparison, EQIP provides a fixed amount of mandatory dollars each fiscal year, beginning at $1.35 billion for FY 2014 and increasing to $1.75 billion in FY2018.  The statute does not require any specific allocation of the EQIP funds to the States.  As a result, States receive different allocations of funding from the two programs.  Figures 3 and 4 illustrate the State-by-State share of financial assistance obligations from CSP and EQIP, respectively, using Natural Resource Conservation Service (NRCS) Data for FY 2010 through 2016 (NRCS, RCA Report-Program Reports). 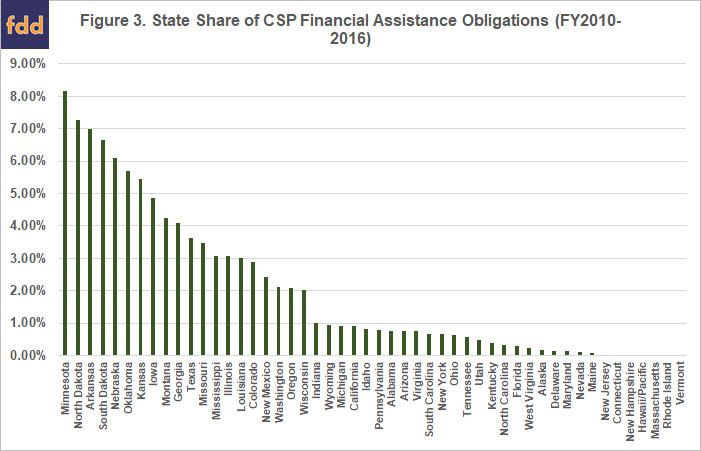 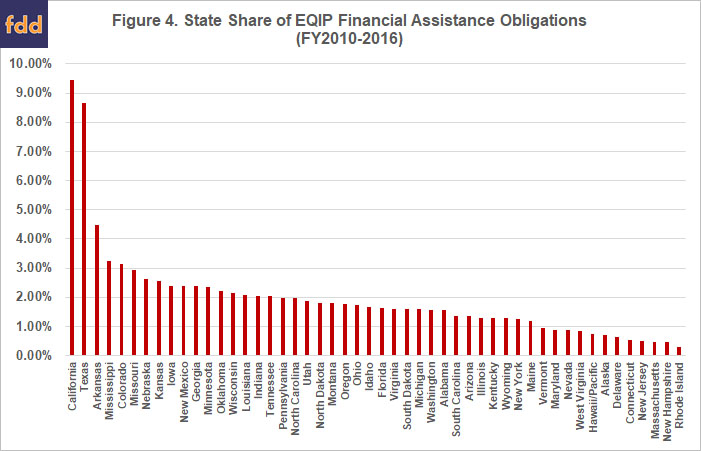 H.R. 2 does not provide explicit instructions to USDA for state-by-state allocations of the funds made available in the revised EQIP.  To arrive at an initial estimate of the impacts of the changes in the bill, the FY 2010 to 2016 allocations for CSP and EQIP are used.  Reviewing the estimated impact of the changes proposed in H.R. 2 begins with Figure 5; a comparison of the combined CBO Baseline for CSP and EQIP with that spending revised to reflect the CBO scoring estimates for the bill.  Figure 5 indicates that some spending on CSP continues after elimination because the funds are obligated in existing contracts, up to five years.  It also indicates that the increased spending for EQIP does not offset the reductions in spending from eliminating CSP. 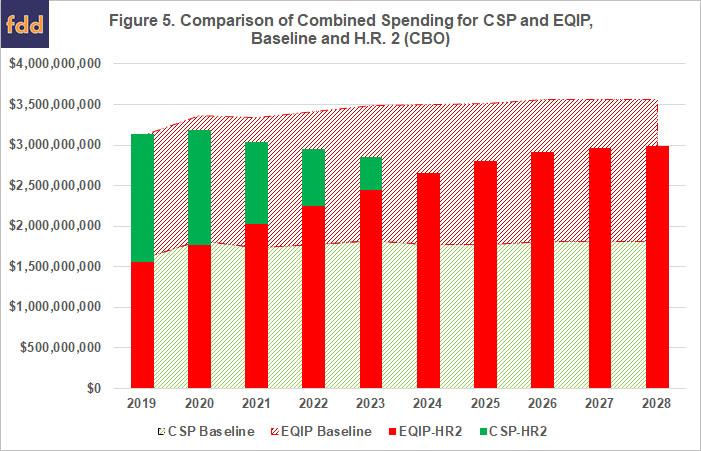 Figure 6 illustrates total estimated funds expected for each State based on applying the FY 2010-2016 State share for CSP (Figure 3) and EQIP (Figure 4) to the CBO Baseline for each program.  It totals the funds for each State over the ten-year budget window used in the CBO score (FY2019-2028).  This is method for estimating what the States could expect under a continuation of current law. 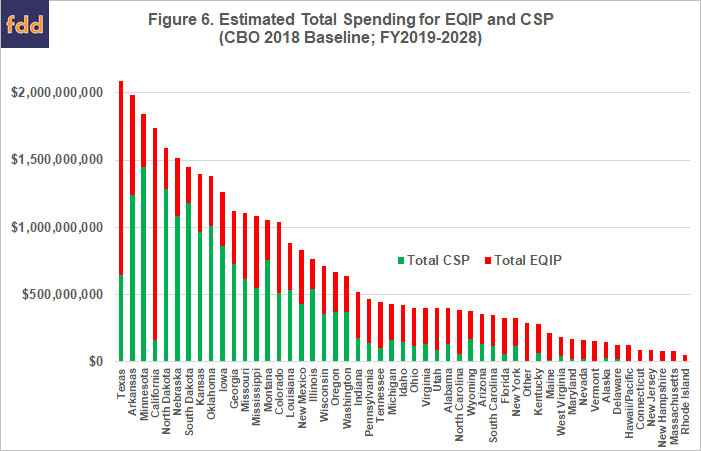 H.R. 2 would revise the total spending on both programs, presumably impacting each State’s share of funding.  Figure 7 uses the FY 2010-2016 State share in Figure 3 to estimate the state-by-state impact of eliminating CSP; applying the State share to the CBO score for CSP in H.R. 2, totaled for the entire baseline period (FY2019-2028).  As would be expected, the states with the largest share of historic obligations would lose the most funding with the program’s elimination. 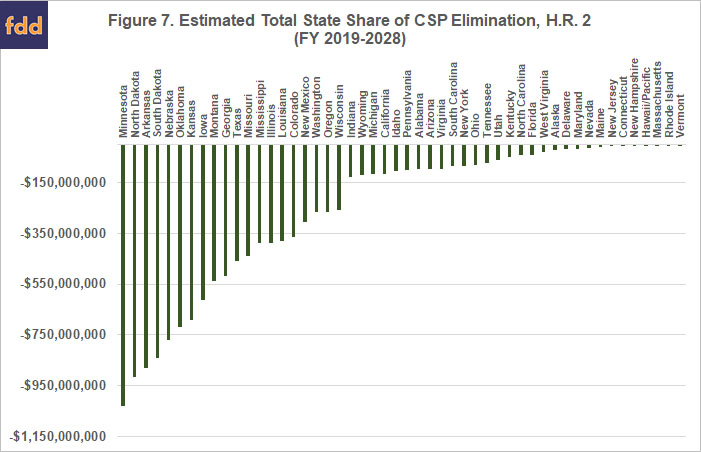 The state-by-state impact of H.R. 2 on EQIP spending is not as straight forward.  The FY 2010-2016 allocations in Figure 4 are impacted by the statutory requirement that 60% of the funds go to livestock operations.  H.R. 2 eliminates this requirement, while adding stewardship contracting authority to EQIP and limiting its funding to 50% of the total allocation.  Figure 8 estimates state-by-state spending under EQIP as revised by H.R. 2, applying the FY 2010-2016 State shares for CSP and EQIP (Figures 3 and 4) to 50% each of the total EQIP funding as increased by H.R. 2 according to CBO.  The estimates in Figure 8 operate under the assumption that stewardship contracts would be allocated similarly to CSP and the remaining 50% of non-stewardship EQIP funds would be allocated similarly to EQIP in the FY 2010-2016 period.  As such, each State’s estimated total consists of different levels for stewardship and non-stewardship EQIP; for example, most of Texas’ funds (70%) come out of non-stewardship EQIP while most of Minnesota’s (78%) come out of stewardship contracts. 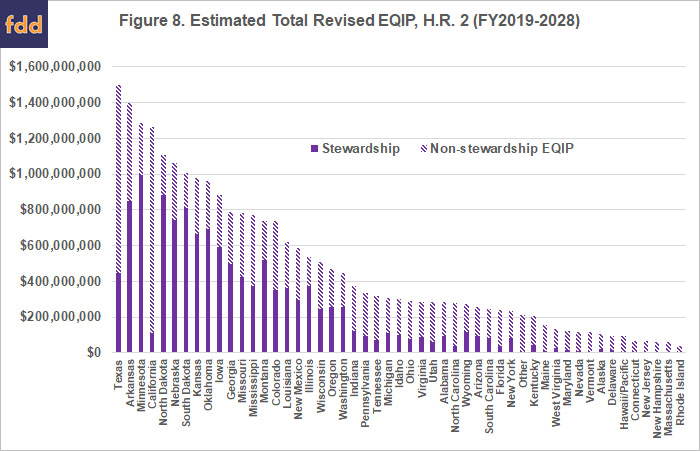 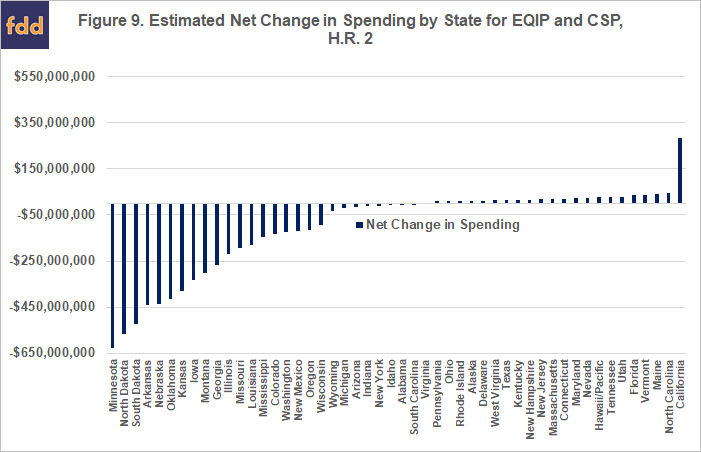 The farm bill reported by the House Ag Committee and defeated on the House floor, if successfully reconsidered (passed) and enacted into law, would have substantial impacts on spending for working lands conservation.  The bill proposes to eliminate CSP, leaving behind residual funding that is already obligated pursuant to existing contracts.  It also proposes a substantial increase in EQIP funding, which is to be divided into new stewardship contracts and the rest for traditional EQIP cost-share.  The exact impacts of these changes are difficult to estimate at this stage in the process.

Reviewing state-by-state allocations from fiscal year 2010 through 2016 can provide a perspective about the potential for shifts in the allocations for conservation assistance.  The bottom line is that total funding for these two working lands conservation programs will decrease by nearly $5 billion; a total reduction that increases to over $10 billion if the obligated CSP funds for existing contracts are not included.  Moreover, if past allocations by State are indicative of future allocations under these revisions, then significant funds would be expected to move among the States to the benefit of those that receive larger shares of EQIP.  While the final impact on conservation assistance is unknown, the initial estimates in this article raise numerous concerns that would benefit from further analysis and discussion.