In recent weeks, cash corn prices have declined by $.50 per bushel and soybean prices by $1.80 per bushel, resulting in much lower 2018 income expectations.  Crop revenue and returns are projected for corn and soybeans on high-productivity farmland in central Illinois.  These per acre returns then are used to project 2018 net income on a 1,500 acre grain farm.  At prices of $3.40 for corn and $8.45 for soybeans, 2018 net incomes could approach the average for the past two years if three conditions are met: 1) a significant amount of grain produced in 2017 was sold in 2018 for a marketing gain, 2) at least 25% of 2018 expected production was forward contracted at prices above those currently offered by the market, and 3) yields are at high levels similar to those in the past several years.  Not meeting any of these conditions could result in much lower incomes.  Of course, price increases could change the income outlook.

Most farm income statements are calculated using modified cost principles.  Under this approach, gross revenue from crops include 1) crop revenue and 2) change in crop inventory values beginning and ending of the year.  Often, differences between the beginning of the year inventory values and old-crop sales prices have significant impacts on gross revenue (farmdoc daily, May 10, 2016, for more discussion).  Those marketing gains will be a significant source of income on many farms in 2018.

Table 1 shows an example of income calculation for corn and soybeans grown on high-productivity farmland in central Illinois.  Several assumptions are used in the construction of gross revenue.  The first set relates to gains on old crop sales. The farm is assumed to have had 110 bushels per acre of corn in storage at the beginning of the year.  The 110 bushels value represents about one-half of 2017 production.  For 2017 income statement preparation, this inventory was valued at $3.20 on the 2017 end-of-year balance sheet.  The $3.20 was near the cash value at the end of 2017 and was used by Illinois Farm Business Farm Management (FBFM) for valuing unsold corn inventory at the end of 2017.  From the beginning of the year, corn prices rose and were higher than $3.20 throughout much of the first half of 2018. Cash corn prices in central Illinois averaged $3.55 per bushel.  A $3.55 sale on old crop would result in a $.35 gain per bushel on old crop inventory.  For 110 bushel of unsold corn, a $.35 per bushel gain results in a $39 per acre gain for corn (see Table 1). 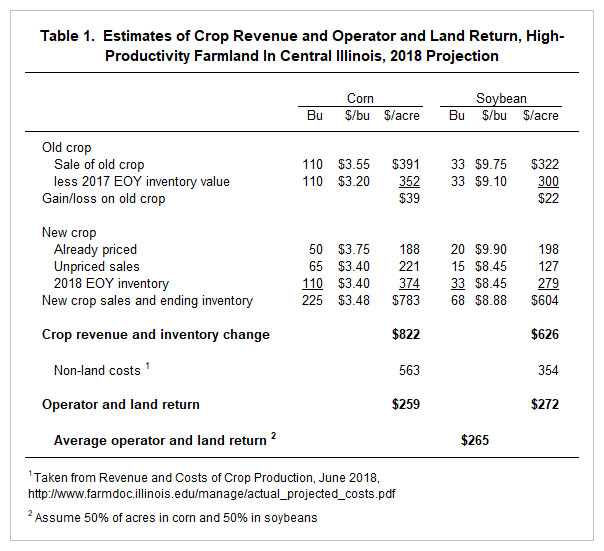 For soybean, 33 bushels per acre were assumed to be in inventory at the beginning of the year, roughly half of production.  Cash prices in central Illinois averaged $9.75 during the first six months of the year, and Illinois FBFM inventory value was $9.10 per bushel, resulting in an estimated gain of $22 per acre on old crop soybean sales (see Table 1).  The old-crop corn and soybean gains will have large positive impacts on 2018 income.

Most farmers likely priced some of 2018 production earlier in the year.   A survey earlier in the year suggests that farmers hedged about 25% of expected corn production by this point in time (farmdoc daily, May 15, 2018).  Hedging 25% of corn on high-productivity farmland is about 50 bushels per acre. The average bid price for fall delivery in central Illinois during the first half of 2018 was $3.75 per bushel.  Given these values, already priced new crop sales of corn has $188 per acre of crop revenue (see Table 1).

For soybeans, 20 bushels are assumed to be priced for new crop, or about 30% of expected production.  This value is slightly higher than for corn.  The average fall delivery price during the first half of the year was $9.90, resulting in $198 per acre of priced new crop sales for soybeans (see Table 1).

In recent weeks, corn and soybean prices have fallen dramatically.  As of July 9, new crop bids in central Illinois are near $3.40 per bushel for corn and $8.45 per bushel for soybeans.  These prices will be used for the remaining 2018 production.  Given 225 bushels of total 2018 production, there are 175 bushels of corn to sell after taking into consideration the 50 bushels of already sold grain.  The 175 bushels is divided between unpriced sales of 65 bushels per acre and end-of-year (EOY) inventory of 110 bushels per acre.  Since both unpriced sales and EOY inventory are valued at $3.40 per bushel, the division between the two does not matter in 2018 income projections.  Unpriced soybeans of 48 bushels per acre are similarly valued at $8.45 per bushel.

Variability of Operator and Land Returns Across Farms 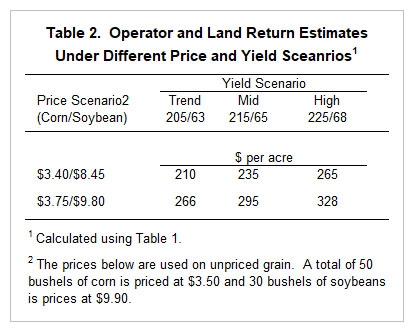 The $77,000 net income is built on three key assumptions that will vary from farm-to-farm:

A combination of any of the three impacts listed above is additive.

Recent price declines have lowered grain farm income prospects for 2018.  There still is some possibility of having near average incomes given 1) marketing gains occurred on old crop, 2) over 25% of expected production has been priced at average fall delivery bids earlier in the year, and 3) relatively high yields occur.  Not meeting any of those three conditions will result in lower incomes.   Rebounds in crop prices are possible, which could increase income prospects.  Time will tell on this matter.

As is the usual case, there will be variability in income across farms.  This year, the amount of pre-harvest hedging will be a key variable explaining differences in revenue across farms.

Schnitkey, G. " Revenue and Costs for Corn, Soybeans, Wheat, and Double-Crop Soybeans, Actual for 2011 through 2017, Projected 2018." Department of Agricultural and Consumer Economics, University of Illinois at Urbana-Champaign, June 2018.

Schnitkey, G. "Forecast of 2017 Net Income on Grain Farms in Illinois: Lower than in 2016 but Better Than Expected." farmdoc daily (7):215, Department of Agricultural and Consumer Economics, University of Illinois at Urbana-Champaign, November 21, 2017.