In 2018, many grain farms in Illinois will have incomes above $70,000 per farm, the average from 2013 to 2017. Incomes in 2019 could be negative on many farms. While scenarios exist that result in near average incomes, it seems best to plan for negative incomes on grain farms in 2019. Income from 2018 should be saved to cover potential losses in 2019.

Figure 1 shows average net incomes on grain farms enrolled in Illinois Farm Business Farm Management (FBFM) from 1996 to 2017. Projections also are shown for 2018 and 2019. As can be seen, income has varied over time, with three distinct periods. From 1996 to 2006, commodity prices were low relative to the later periods, and net farm income averaged slightly over $50,000 per farm. From 2008 through 2012, corn and soybean price were higher because of increasing use of corn in making ethanol, continuing growth in exports of soybeans, and shortfalls in productions in places around the world. During the 2006 to 2012 period, incomes averaged $198,000 per farm. Since 2012, commodity prices have been lower because of slowing growth in corn used in producing ethanol and high yields across many producing areas in the world. In 2018, concerns increased over whether soybean exports would continue to grow. From 2013 to 2017, farm incomes on grain farms averaged $75,000 per farm. In 2017, net income was lower than the 2013-2017 average at $46,000 per farm. 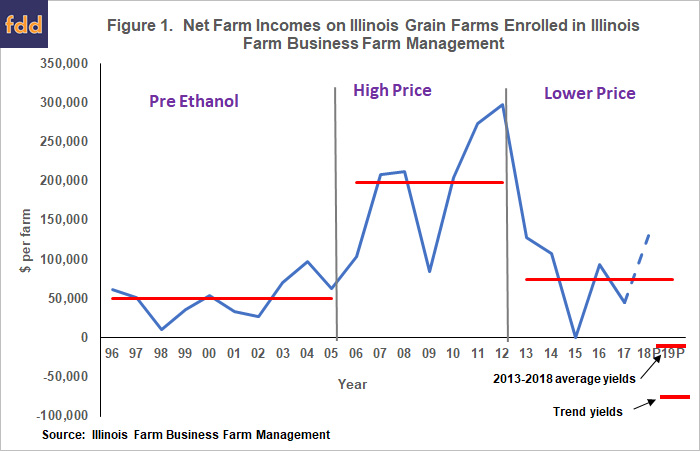 Illinois FBFM has not summarized incomes for 2018; however, it is reasonable to expect 2018 incomes to be higher than the 2013-2017 average of $75,000 per farm. Three factors contribute to higher incomes:

As always, incomes will vary across farms because of yield variability. Some areas had poorer yield than other regions. Also, the amount of grain that was priced before May will impact returns across farms.

Expectations are for much lower incomes in 2019 because of two factors:

From 2013 to 2018, actual yields in Illinois have average 20 bushels per acre above trend for corn and 6.5 bushels above trend for soybeans (see farmdoc daily, December 11, 2018, and January 3, 2019). These higher yields raised incomes in recent years. A return to trend yields would result in lower profits.

At trend yields — 20 bushels per acre lower than in recent years for corn and 6.5 bushels lower for soybeans — 2019 average net income on Illinois grain farms is projected at -$55,000 per farm, a disaster level of income that would result in substantial reductions in working capital and severe erosions of financial position. Some farms would face financial stress. A -$55,000 would be a much lower income than occurring in the 1980s during the height of the farm financial crisis.

Higher yields like those experienced in recent years would result in average net income being -$3,000 per farm. This income would be slightly worse than the 2015 income (see Figure 1). At this income level, erosion of financial position would occur on most farms.

At this point, many scenarios could cause grain farm incomes to be very low. Scenarios are evaluated that would cause 2019 incomes to be near the $75,000 average level experienced from 2013-2017. The following three scenarios seem the most likely to occur:

At this point, it seems likely that net farm incomes will be very low in 2019. Negative average incomes across Illinois grain farms are possible in 2019.  As often happens in agriculture, conditions can change, resulting in a brighter outlook. Still, it seems prudent to plan for low and negative incomes on grain farms in 2019. Saving 2018 income and building working capital seems like a good strategy for combating potentially low income in 2019.