As set-asides are discussed as a farm policy alternative, the changing global nature of agricultural production needs to be considered.  As world production of corn and soybeans has increased significantly in the past 30 years, the U.S. has lost production and export share.  South America, mainly Brazil, is now a major competitor of the U.S., particularly in soybeans, but increasingly with respect to corn as well. The concern is that removing U.S. acres may encourage production in the rest of the world, with Brazil being the most likely leading country with acreage increase, reducing any positive price effect from the U.S. set asides and further leading to additional loss of market share for U.S. farmers.

This article continues the discussion of set asides as a potential policy response to low commodity prices, largely a result of the trade conflict and COVID-19 and associated control measures. In Part I of this series, an historical overview of set aside policy was provided (farmdoc daily June 26, 2020). In Part II, the U.S. role in world crop markets over time was viewed from a relative perspective – U.S. shares of global production and exports – for major crops to illustrate the likely effectiveness, or lack thereof, of supply control policies given recent trends in global production and exports (farmdoc daily July 1, 2020). Today in Part III, we take a more detailed look at the U.S. role in global production and exports for corn and soybeans.

We use data from the USDA Foreign Agricultural Service’s (USDA-FAS) Production, Supply & Distribution (PSD) database. Comparisons of the U.S. to other production areas of the world are made between the 1990s to the present for production, harvested area, yield, and exports of corn and soybeans.  The 1990s are intended to capture the decade where U.S. farm policy made a deliberate shift away from supply management programs – including acreage set aside authority – through implementation of the 1996 Farm Bill. The 2010s are intended to represent the most recent decade capturing the current state of global corn and soybean markets.  Averages over the two decades are compared to illustrate trends. 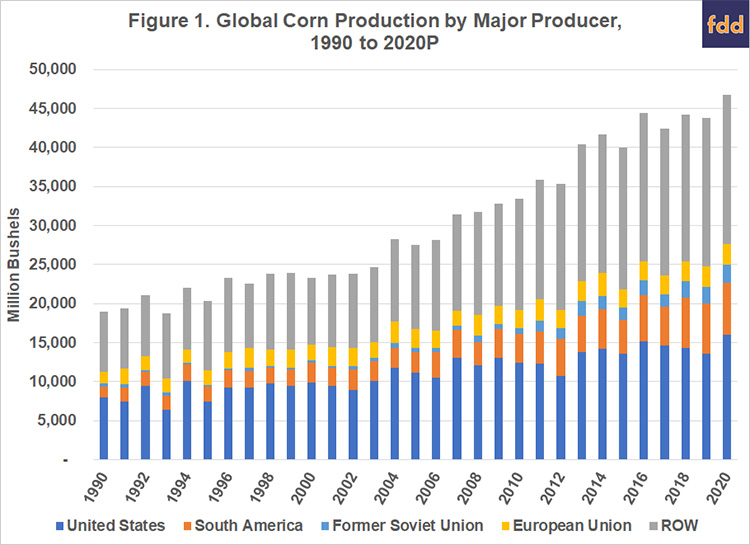 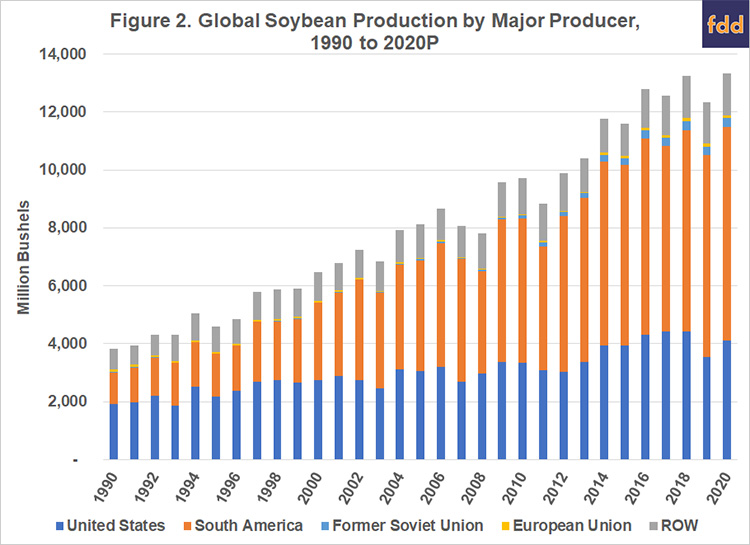 Improved yields are the primary driver of U.S. increases in corn production, as U.S. average yields are well ahead of the all world average (Figure 3).  However, average corn yields are quickly improving in areas such as SA and the FSU, now exceeding the world average in both areas in recent years. Average U.S. corn yields were 31% larger in the last 10 years as compared with the 90s. Corn yields in SA (FSU) have increased by 95% (88%) over the same time period. 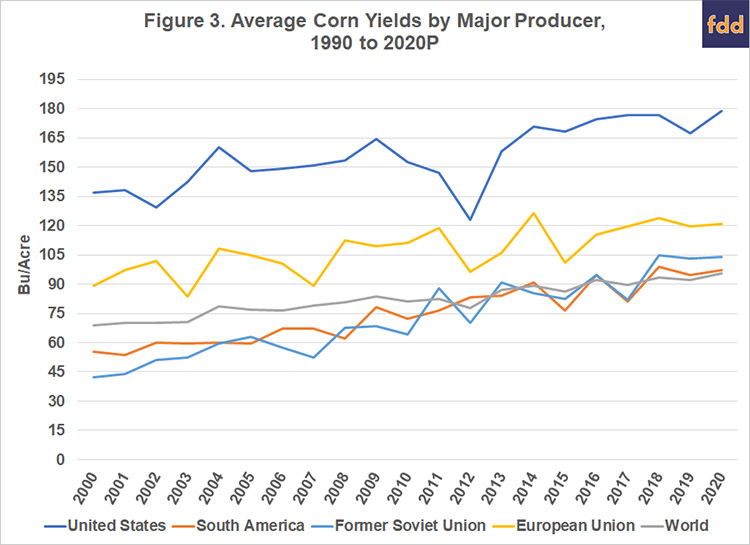 Improved yields have also been a driver of increased U.S. soybean production, increasing more than 25% since the 90s (Figure 4).  Yield growth has been greater in SA, increasing nearly 32% since the 90s.  Average soybean yields in SA are now effectively on par with the U.S. 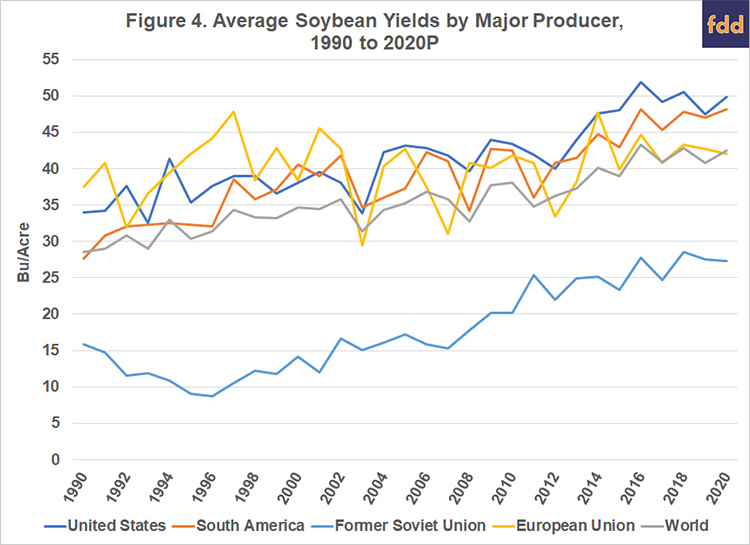 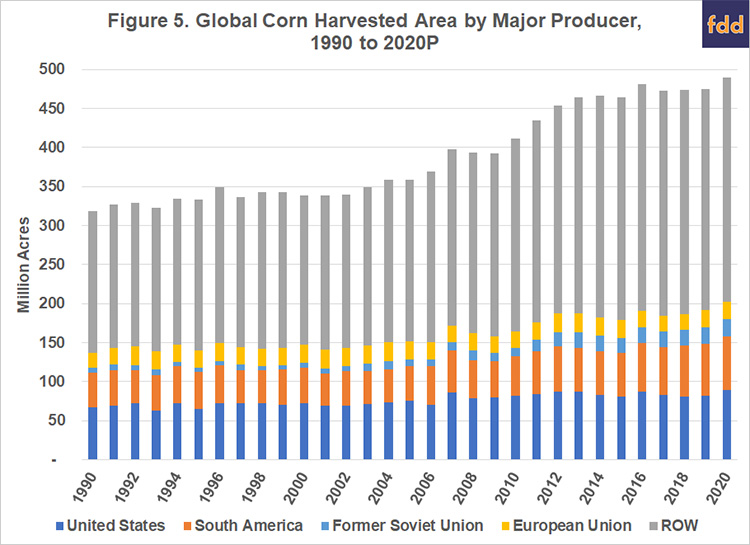 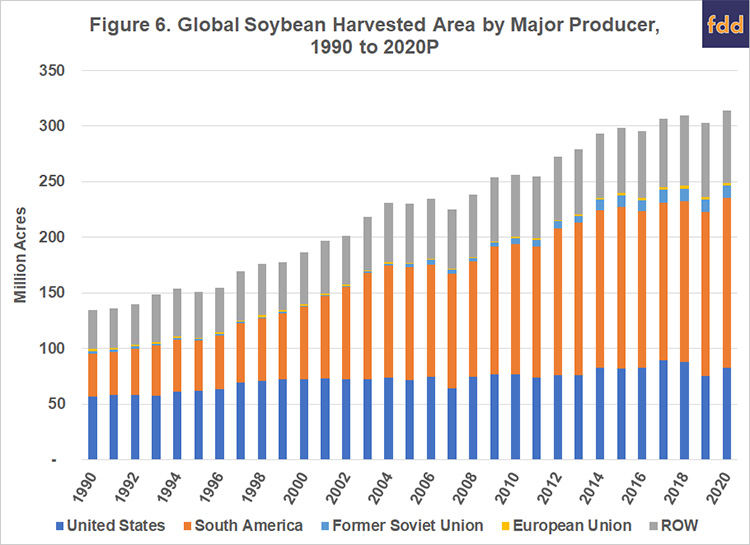 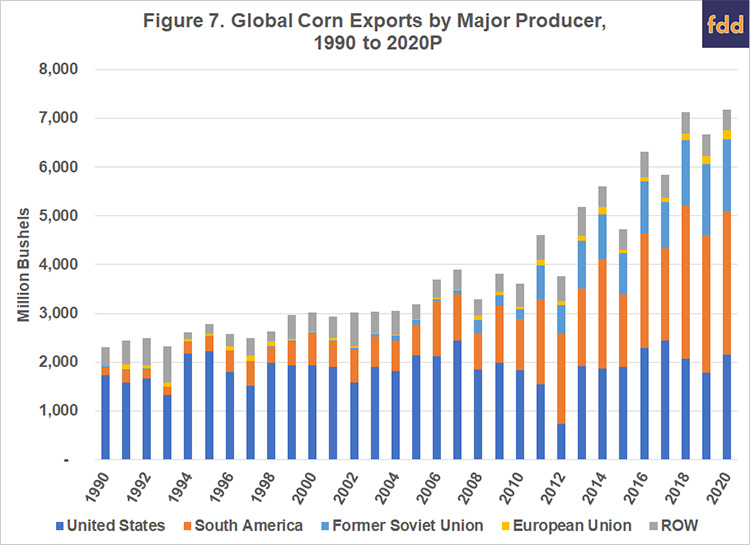 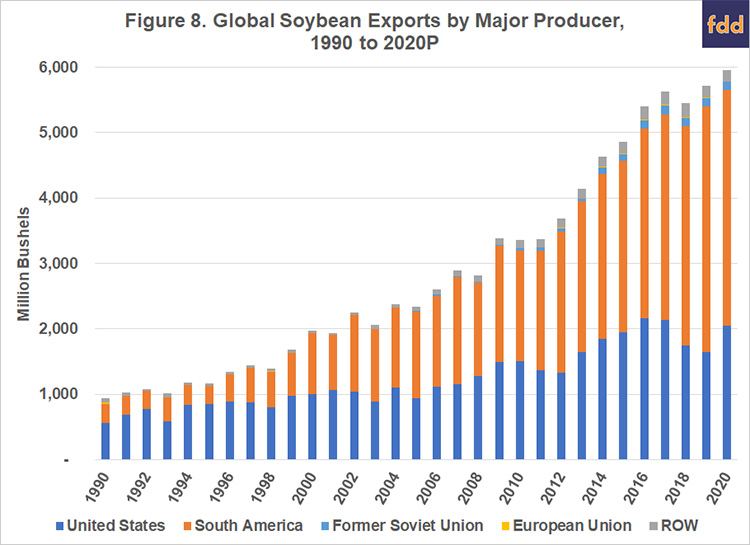 Low commodity prices since 2013, coupled with the added negative shock to prices since 2018 brought on by trade conflicts and the impact of COVID-19 and associated control measures, have led to increased interest in the return to supply management policies to help raise prices for U.S. farmers.  These types of policy approaches have been used throughout history but have largely been abandoned since the 1996 Farm Bill.

The changes in the global markets shown here illustrate the declining role of the U.S. as a leading producer and exporter of corn and soybeans over the past 30 years. Supply management policies, such as acreage set asides or land retirement programs, implemented here in the U.S. would be less effective now than when the U.S. played a more dominant role worldwide.

Any positive price effects achieved by U.S. supply reductions would likely be short-lived, as the other major production areas of the world would likely respond with increased production. The ability of production regions in the southern hemisphere to quickly adjust production within the U.S. marketing year highlights this issue, and was further discussed in Part II of this series (farmdoc daily July 1, 2020). Furthermore, the combination of reductions in U.S. acreage and production, and any resulting increased production in other parts of the world would result in additional losses in global production and export shares for U.S. producers.