Russia’s invasion of Ukraine has created turmoil in all markets, including agriculture. As Midwest farmers approach key decision points, including the March 15 deadline for 2022 crop insurance and commodity title decisions, we briefly overview the Russian-Ukraine conflict. Overall, the war likely will cause corn returns to increase relative to soybeans, but nitrogen fertilizer costs and supply will continue to be issues. Maintaining longer-termed rotations seem prudent. Higher price volatility suggests maintaining high coverage levels for crop insurance. Keeping policies with a guarantee increase, such as Revenue Protection (RP), seems prudent. The conflict has little impact on Commodity Title decisions.

Ukraine has 102.5 million agricultural acres, a little more than double the combined acres of Illinois and Iowa. With fertile soils and a climate akin to Kansas, Ukraine is a major wheat exporter, with a 10% share of world exports from 2017 to 2021 (see farmdoc daily, February 28, 2022). Ukraine has a notable share of world exports for other commodities, including corn (15%), barley (15%), and sunflower oil (50%).

The war has largely halted agricultural exports from Ukraine, causing spikes in some agricultural prices, most notably in wheat. How long Ukraine’s exports are shut down is unknown. The war likely will disrupt spring planting progress in Ukraine. To what degree planting disruptions will occur is unknown. Ukraine’s winter wheat crop was planted last fall and is reported in good condition. How disruptive the war will be on the wheat harvest is unknown.

Western countries have placed financial sanctions on Russia, attempting to isolate Russia. These sanctions are reported to have significant impacts on the Russian economy and could cripple the nation (see Financial Statements Will Create Wide-Ranging Impact). Depending on their effectiveness, those financial sanctions could provoke responses from Russia. Economic and trade sanctions on Russia and their responses could have more impact on global agricultural trade than the direct impacts on production in and exports from Ukraine.

While the war does not hamper agricultural operations in Russia, western sanctions will have significant impacts on agricultural trade. Together, Russia and Ukraine represent nearly 30% of global wheat exports. Wheat exports likely will be re-routed because of the conflict. Larger flows from Russia and Ukraine should be expected to countries more friendly with Russia, such as China and Pakistan. Countries less friendly to Russia will have to rely on wheat from other sources.

Disruption in all Russian trade flows should be expected, including in crude oil, natural gas, and fertilizers. Crude oil prices have increased already, hitting levels of $120 per barrel as bans on Russian oil are considered (see OilPrice.com).

Russia is a major natural gas supplier to Europe, providing 40% of Europe’s natural gas needs (see Can the US Supply Enough Natural Gas To Neutralize Russia’s Energy Leverage Over Europe?). European countries likely will try to reduce reliance on natural gas from Russia, with suggestions for how this could be accomplished already announced (see here). Europe will attempt to rely more heavily on natural gas from other sources, including importing liquid natural gas from the United States. However, these efforts will be hampered by a lack of infrastructure to fully offset Russian natural gas, including ships to carry liquified natural gas and ports to unload the gas.

Based on the above description, the following summary points result:

Corn and soybean prices have been on an upward trajectory since December 2021, as can be observed in Figure 1. Figure 1 shows the settlements of the December 2022 corn contract traded on the Chicago Mercantile Exchange and the November 2002 CME soybean contract. These contracts were used to set 2022 projected prices on crop insurance contracts in the Midwest. The projected price for corn is $5.90 per bushel, the second-highest ever. The projected price for soybeans also is a record high level at $14.30 per bushel. Settlement prices of those CME contracts on March 4 were $6.29 for corn, and $14.50 for soybeans, above the projected prices, set based on average settlement prices during February. 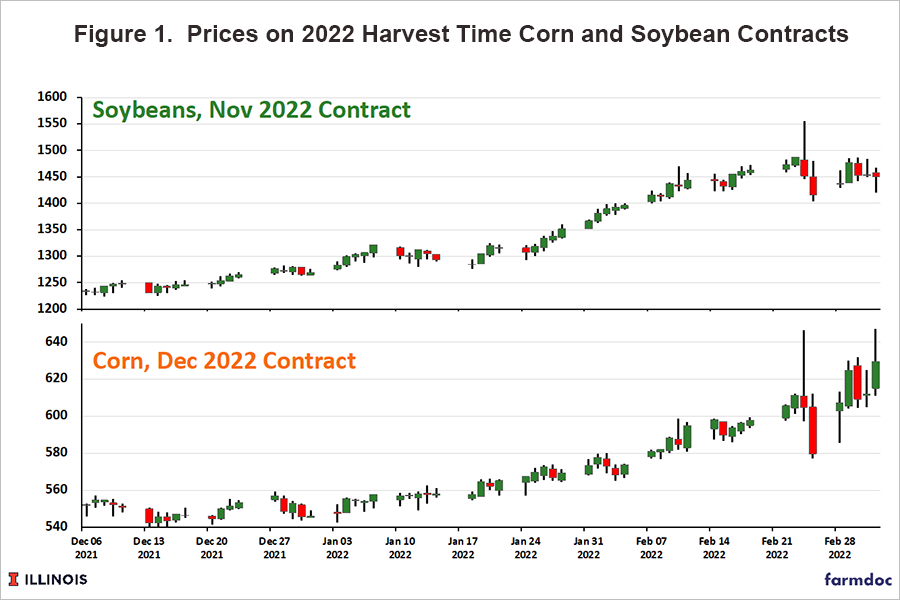 Current 2022 fall delivery bids in Illinois are $6.00 per bushel for corn and $14.00 for soybeans. Budgets for four regions were updated using those prices (see Crop Budgets) and are shown in Table 1. These budgets also have higher fertilizer costs, and crop insurance costs were increased to reflect higher crop insurance premiums. These budgets reflect the returns assuming that not much of the crop has been priced and little nitrogen has been applied or priced. 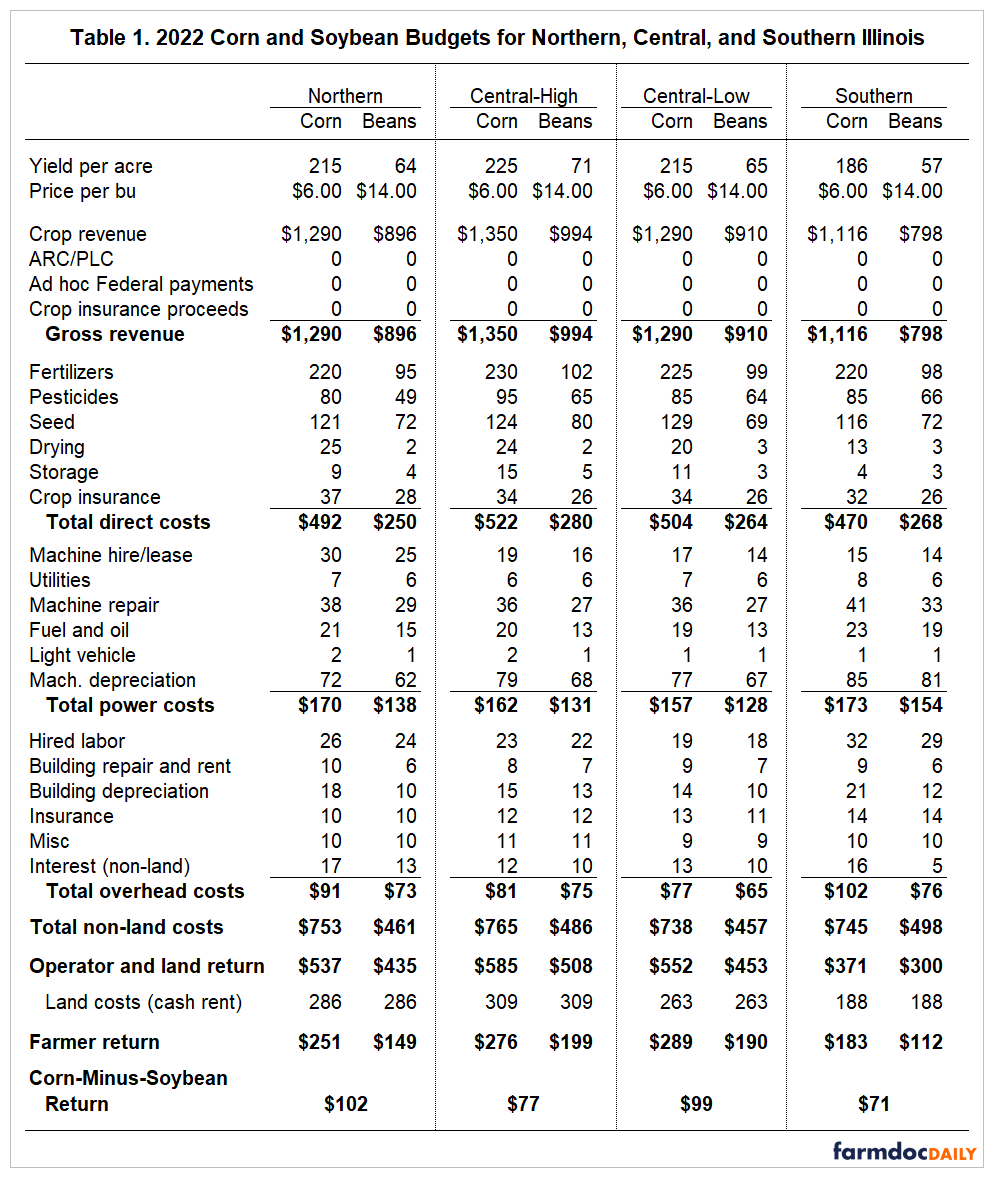 At this point, most Midwest farmers likely have solidified their 2022 planting plans. Corn is projected to be more profitable than soybeans, as has been the case through much of the planning season. Maintaining rotations based on longer-term expectations likely will be a prudent practice.

For Midwest states, the projected prices are $5.90 per bushel for corn and $14.33 per bushel. Volatilities used to set premiums also were at high levels: .22 for corn and .19 for soybeans. Overall, prices and volatilities were set in a heightened risk environment, likely reflecting concerns over the potential of a Russia-Ukraine conflict.

Now the conflict has started, eliminating any hope of conflict avoidance. Russia’s advances into Ukraine have been very slow, suggesting that fighting will not end soon and could disrupt spring planting and wheat harvesting. Western nations have shown resolve to oppose Russia, leading to longer termed sanctions against Russia. Overall, the price situation has become more volatile, as evidenced by higher volatilities in the market, with March 5 implied volatiles being .30 for corn and .21 for soybeans.

The increased volatility means the potential for even higher prices exists, particularly if there are significant disruptions to Ukraine’s spring planting and harvest. Such disruptions, combined with a drought or yield shortfalls in the US, could lead to explosive prices. Also possible are lower prices, caused by a combination of 1) a quicker end to the Ukraine conflict and 2) a recession in the US or Western Europe which could lead to lower demand for meat.

For those concerned with premium costs, we have discussed the alternative of using RP with the harvest price exclusion (RPhpe) and ECO (see farmdoc daily, February 22, 2022). Given recent fighting in Ukraine, the possibility of higher harvest prices is increased, thereby increasing the value of the price guarantee aspect of RP. The RPhpe strategy may still have appeal as long as one realizes that the guarantee will not increase. When using RPhpe, forward pricing of grain should be limited.

Overall, regardless of policy choice, the use of high coverage levels seems warranted.

The Russia-Ukraine conflict has heightened price volatility and, at least initially, to price increases. At this point, corn is projected to be more profitable than soybeans in all regions of Illinois, as has been the case throughout much of the planning season for the 2022 crop. Maintaining corn acreages at levels consistent with long-term rotations seems prudent. Use of crop insurance at high coverage levels is warranted. Price volatility suggests greater value in maintaining policies with the guarantee increase, such as RP.