To the Framers, the political power of factions was the mortal disease of self-government; the Constitutional design was intended to be a republican remedy for that disease.  The remedy included the system of representation (or republican democracy) and a reliance on the concept of an extended republic.  The key ingredient, however, was the structure of the government which channeled factions into a political competition by which they would check each other and control or minimize the most problematic consequences inherent in factional political power.  James Madison memorably explained that, “[a]mbition must be made to counteract ambition” to supply “the defect of better motives” (Madison, The Federalist No. 51).  For this theory of factional competition in the political arena, the structure of the system and how it was designed determines much about whether a competition among factional interests is fair, functional and effective.  The rules by which the chambers operate are also critical as they set further parameters on the competition.

Vested with the legislative power by the Constitution, only Congress has the power to initiate the creating and amending of statutory law.  To exercise that power, however, the Founders designed a complex, complicated and difficult process (Eskridge, Frickey and Garrett, 2006).  According to the Supreme Court, “the legislative power of the Federal Government [must] be exercised in accord with a single, finely wrought and exhaustively considered, procedure” (Immigration and Naturalization Service v. Chadha, 462 U.S. 919, 951 (1983); Clinton v. City of New York, 524 U.S. 417 (1998)).  Formally, that procedure requires identical legislative text to pass both the House and Senate before it is presented to the President (U.S. Const., Art. I, Sec. 7).  Upon presentment, the President may approve the legislation, signing it into law, or disapprove of the legislation by vetoing it; any veto goes through a subsequent step by which a two-thirds supermajority of each House of Congress must successfully vote to override the veto.  Figure 1 includes the provisions in the Constitution that created the legislative process.

Figure 1. The Legislative Process in the Constitution 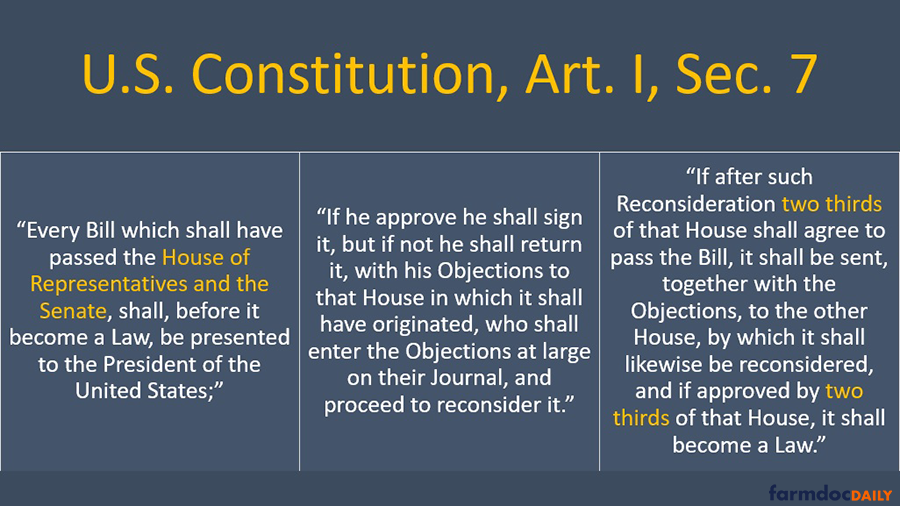 Fifteen of the essays in The Federalist Papers focused on the design of Congress (No. 52 through No. 66).  Historians have generally concluded that Madison likely wrote most of the essays in this set, although authorship is often attributed jointly with Alexander Hamilton (see e.g., “Founders Online,” National Archives).  Madison’s prelude to the discussion on Congress was his essay laying out the theory of political competition among factions.  He wrote that “exterior provisions are found to be inadequate” for the purpose of checking factional power and that “defect must be supplied, by so contriving the interior structure of the government as that its several constituent parts may, by their mutual relations, be the means of keeping each other in their proper places” (Madison, The Federalist No. 51).  Figure 2 provides additional passages that highlight the theory of political competition applied to the structural design.

Figure 2. Highlighting the Theory of Political Competition in the Design 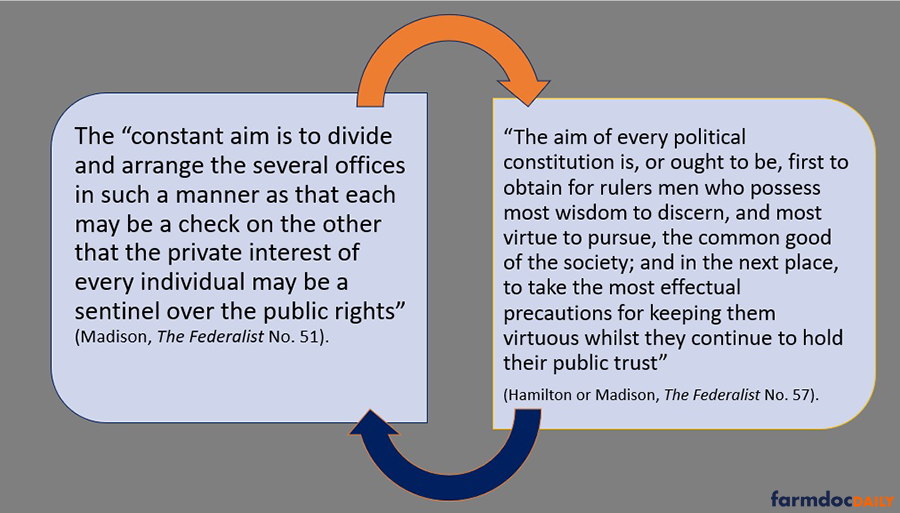 The structural design is known as bicameralism: the legislative branch divided into two chambers—the House of Representatives and the Senate—with the design of each significantly different from the other.  Representatives in the House were to be elected every two years, while Senators were initially appointed by State legislatures for terms of six years.  Today, of course, citizens of each State directly elect the two Senators that represent them due to the Seventeenth Amendment to the Constitution (U.S. Const., Amend. XVII).  Bicameralism, then, mixes two alternative forms of republican representation, channeling the political power of the citizenry through two different elected bodies.  In concept, and particularly in conjunction with the theory of an extended republic, bicameralism was expected to make it very difficult for any factional interest to exercise control over the Article I legislative power.  As highlighted in Figure 3, the two sides of the legislature were intended to reinforce the separation of powers. 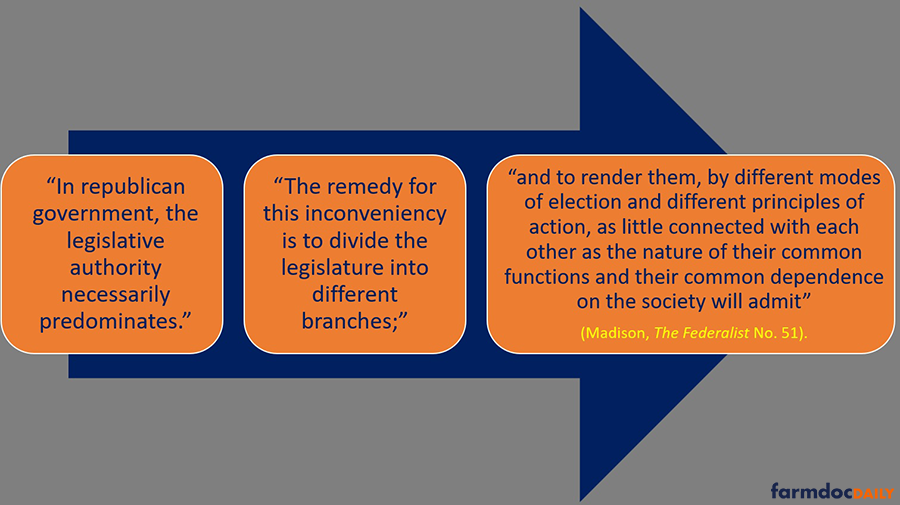 Bicameralism provides the pathway for the Article I, Section 7 process highlighted in Figure 1.  Requiring legislation to pass through two different bodies of representatives in Congress established a double majority requirement for enactment.  As Madison explained it, “[n]o law or resolution can now be passed without the concurrence, first, of a majority of the people, and then, of a majority of the States” (Madison, The Federalist No. 62).  Here again is a clear application of the theory of political competition to internally manage factional powers.  Two different legislative or representative bodies agreeing upon identical legislative text is a recipe for competition and complexity.

In this formulation, passage of legislation in the House can be understood as representing the consent of a majority of the people.  Members of the House are popularly elected in districts of equal size, making them the most closely connected with the will of the voters (Hamilton or Madison, The Federalist No. 52).  The House was expected to be the source of power for the larger states, with greater membership and connected directly to the voters.  As such, Madison expected that the House would possess significant political advantages (Madison, The Federalist No. 58).  This also magnifies one of the more challenging aspects in the design of the House: the optimal number of Representatives and balancing between having too few against too many.  That balancing act is between what was “necessary to secure the benefits of free consultation and discussion, and to guard against too easy a combination for improper purposes” and an upper limit that would “avoid the confusion and intemperance of a multitude” because in “all very numerous assemblies, of whatever character composed, passion never fails to wrest the sceptre [sic] from reason” (Madison, The Federalist No. 55).  Ultimately, the matter belongs to the future: “[w]hat change of circumstances, time, and a fuller population of our country may produce, requires a prophetic spirit to declare, which makes no part of my pretensions” (Madison, The Federalist No. 55).  As discussed previously, however, the number of Representatives in the House has been locked in place for nearly 100 years without regard to the vast growth in the American citizenry (farmdoc daily, October 27, 2022).  Figure 4 offers additional insights from James Madison as he discussed the appropriate number of representatives in the House.

Figure 4. Perspectives on the House and Representation 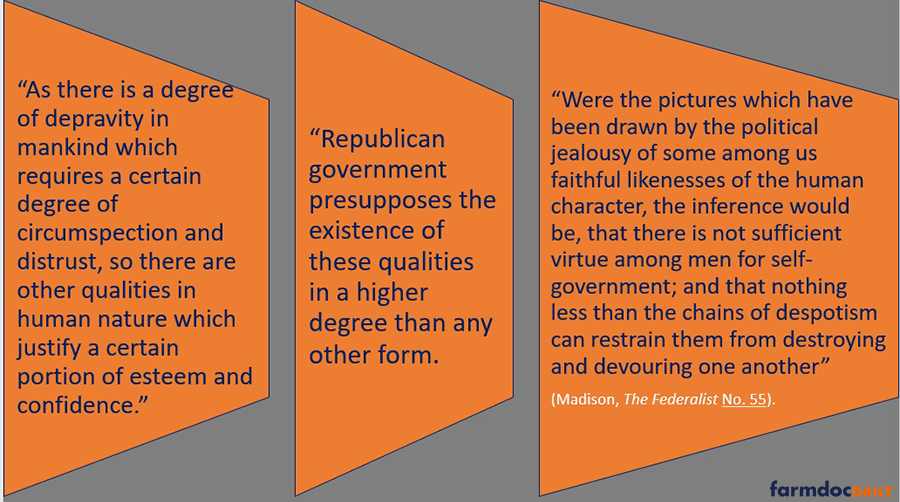 In the double majority formulation, passage of legislation by the Senate is understood as achieving consent of a majority of the States.  While originally appointed by State legislatures, today Senators are elected statewide; each State is represented equally by two Senators.  Madison argued that the design protected the interests of the smaller or less-populated States.  He added that the Senate provided an “additional impediment” to strengthen against “improper acts of legislation” (Madison, The Federalist No. 62).  His arguments for the Senate provide an important indication of an emphasis on the potential for factional interests to drive bad legislation or legislation that was harmful to the public interest.  Figure 5 highlights the double security Madison expected the Senate to provide in the process.

Figure 5. Perspectives on the Benefits of the Senate 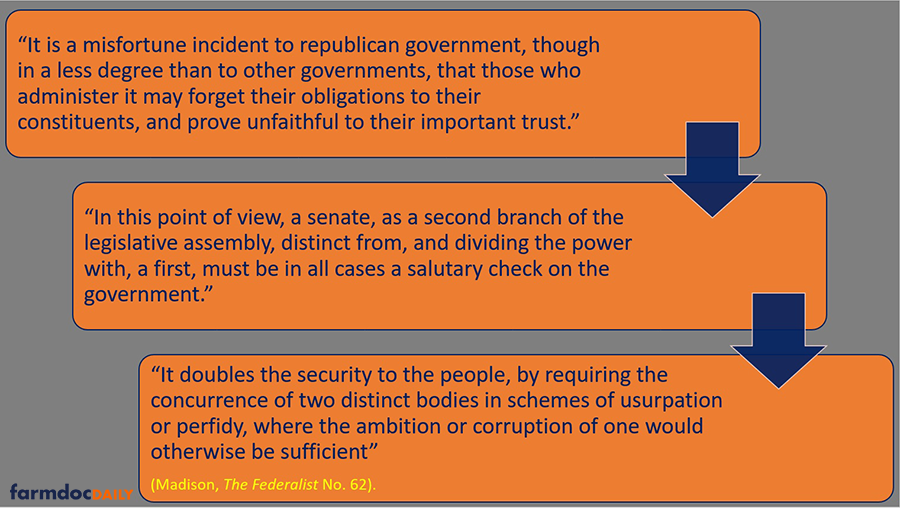 The double majority requirement for enactment and Madison’s theory of a competition bring the discussion full circle to confront the paradox at the core of the design of Congress.  “It must be acknowledged,” Madison wrote, “that this complicated check on legislation may in some instances be injurious as well as beneficial” and that “this part of the Constitution may be more convenient in practice than it appears to many in contemplation,” but an “excess of law-making seem to be the diseases to which our governments are most liable” (Madison, The Federalist No. 62).  Hamilton acknowledged this as well when he discussed the President’s veto power.  “It may perhaps be said,” Hamilton wrote, “that the power of preventing bad laws includes that of preventing good ones; and may be used to the one purpose as well as to the other” but that it was more important to prevent bad law than it was to put at risk good laws.  It was a necessary trade-off, he argued, to better ensure due deliberation in the creation of law.  He added that the veto “establishes a salutary check upon the legislative body, calculated to guard the community against the effects of faction, precipitancy, or of any impulse unfriendly to the public good, which may happen to influence a majority of that body” (Hamilton, The Federalist No. 73).  Hamilton’s views are further highlighted in Figure 6.  This tradeoff might well be the starting point for a critical review and deeper critique of the Congressional design.  It creates significant operational problems with consequences that extend far beyond Congress.

Figure 6. The Tradeoff Embedded in the Design 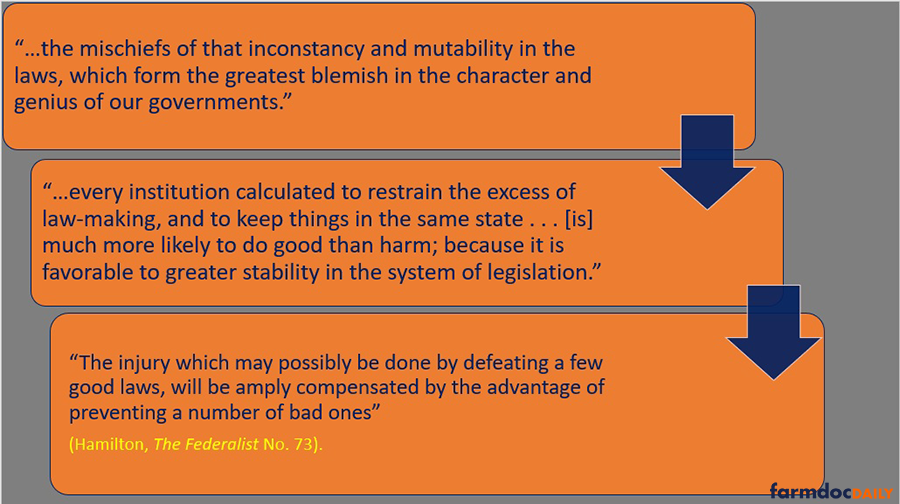 The bicameral Congress was, itself, very much the product of a political compromise with factional interests.  Madison acknowledged that the design of the Senate—two Senators from each State, appointed by the legislatures of the states—that created the double majority was negotiated between the larger states and smaller states of the nascent Nation.  “The equality of representation in the Senate,” he wrote, was the “the result of compromise between the opposite pretensions of the large and the small States.”  It was a deal necessary to get agreement for the Constitution from the representatives of the smaller states and was expected to be of significant benefit to them, providing real power in the legislative process.  The “complicated check on legislation” was worth the risks of “peculiar danger” it presented, however, and Madison considered it the “lesser evil” as “between the proposed government and a government still more objectionable.”  He advised those who would vote on ratification “to contemplate rather the advantageous consequences which may qualify the sacrifice.”  He added that, “it does not appear to be without some reason that in a compound republic, partaking both of the national and federal character, the government ought to be founded on a mixture of the principles of proportional and equal representation” (Madison, The Federalist No. 62).

Considering Congress in modern light, after substantial history and lived experience, we possess much that the Framers could not know at the time (see e.g., Dahl, 2003).  To the extent that the theory of the design was built on competition, the structure stacks the competition in favor of the status quo.  The design was also the result of a political compromise with a faction in the writing of the Constitution.  These initial observations catalyze much for contemplation and the next article in this series will attempt a critical review and critique of the theories underpinning the design of Congress and the design itself.

Blake, Aaron. “The McCarthy concessions that could be flash points.” The Washington Post, January 9, 2023, https://www.washingtonpost.com/politics/2023/01/09/mccarthy-concessions-rules-debate/.