As documented in a farmdoc daily post last week, ethanol producers over the last year have enjoyed one of their best periods of profitability ever. This has been driven by a drop in corn prices that substantially exceeded the declines in ethanol and DDGS prices. This has put the ethanol production industry on a much sounder financial footing after being ravaged by drought-related losses in 2012. Today’s post on biodiesel production profits is the second in a two-part series that examines recent trends in biofuel production profits.

In order to assess biodiesel production profitability over time, a model of a representative Iowa plant  is used.  This model was used in several earlier farmdoc daily posts that analyzed biodiesel profits and supply response (for example, see the posts here, here, and here).  The model incorporates several key assumptions:

This model is meant to be representative of an “average” plant constructed since 2006 to process soybean oil into biodiesel.  There is certainly substantial variation in capacity, production efficiency, and feedstock across the industry and this should be kept in mind when viewing profit estimates from the model.  However, limiting the feedstock to soybean oil is reasonable since it represents over 50 percent of all feedstock used to produce biodiesel in the U.S. and feedstock prices tend to be highly correlated (see Figure 5 in this earlier farmdoc daily post). 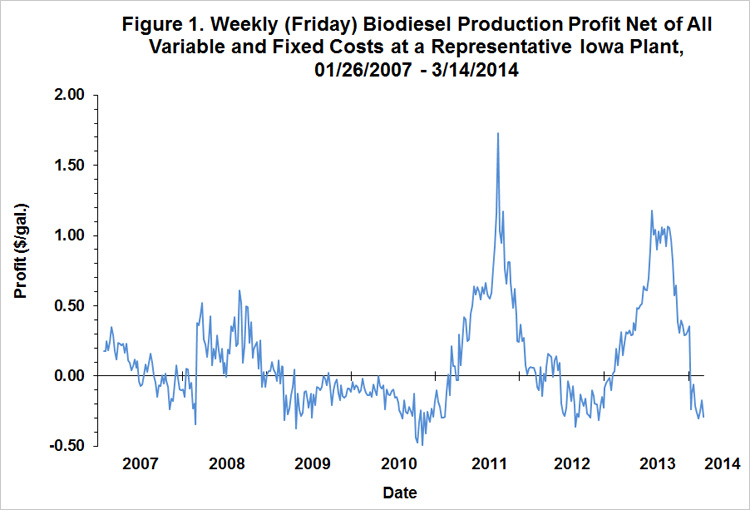 Additional insight into the impact of biofuels policies on biodiesel profits is provided by Figure 2.   Here, the biodiesel price at Iowa plants is plotted versus a simplified breakeven profit relationship between soybean oil and biodiesel prices.  Since soybean oil represents over 80 percent of the variable operating costs of the representative plant, all other costs are lumped into the constant term of 0.60, or 60 cents per gallon of biodiesel produced.  The 7.55 slope is just the number of pounds of soybean oil required to produce a gallon of biodiesel.  One can readily observe that the line for the breakeven relationship tracks the biodiesel price very closely except for the two major spikes discussed above.  In other words, outside of the two spikes, the market has generally priced biodiesel based on the cost of soybean oil, a markup for other variable and fixed costs, and zero profits.  This also implies that, outside of the two spikes, biodiesel and soybean oil prices track one another very closely.  In contrast, biodiesel prices were pushed up substantially above breakeven levels within the two spikes as diesel blenders raced to take advantage of the blenders tax credit before it expired and engaged in discretionary blending to build stocks of biodiesel RINs.   In terms of the latter point, we have argued in several previous posts (for example, here) that the pressure of meeting the RFS renewable (ethanol) mandate with a binding and steep E10 blend wall ultimately shows up in the price of biodiesel. 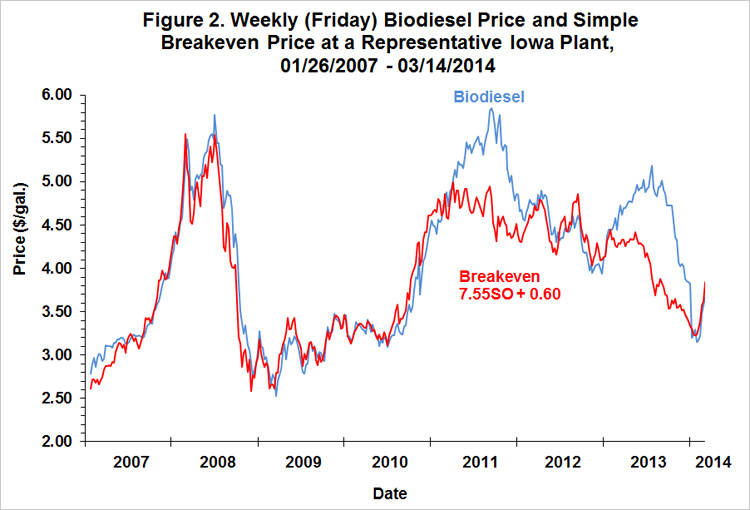 Finally, it is helpful to aggregate the profit margins over an annual horizon in order to see broader trends in estimated biodiesel production profits. Figure 3 shows total annual (pre-tax) profits net of variable and fixed costs for each calendar year between 2007 and 2013.  Profits are presented in terms of both total dollar returns to equity holders and percent return to equity.  The magnitude of profits during the two “spike” years of 2011 and 2013 is particularly striking.  Annual profits were $12.8 million and $15.4 million in 2011 and 2013, respectively.  The 2013 profit was easily the highest over the seven years.  The percentage returns in 2011 and 2013, 54.4 and 64.3 percent, respectively, are truly eye-popping.   Outside of the spectacularly profitable years of 2011 and 2013, cumulative returns were actually negative (-$3.8 million).  Despite the skewed nature of profits, returns to equity holders over 2007-2013 actually averaged a quite respectable 14.7 percent.  This is more than twice the average return to equity holders in ethanol plants, estimated in last week’s post to be 5.8 percent. 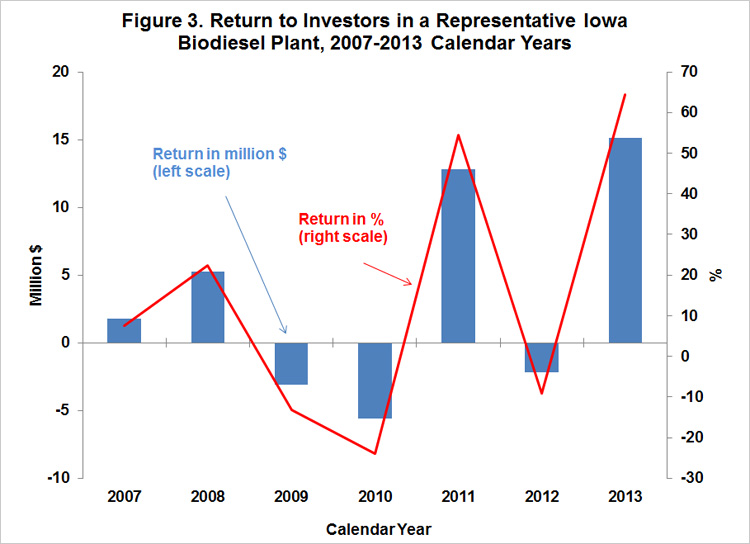