As in previous articles, a model of a representative Iowa biodiesel plant is used to estimate production profits. This model is meant to be representative of an “average” plant constructed since 2006 to process soybean oil into biodiesel. The key assumptions of the model are found in this article (farmdoc daily, March 19, 2014). Figure 1 presents the weekly (pre-tax) estimates of biodiesel profits over January 26, 2007 through October 24, 2014. It is obvious from the chart that profits have been hard to come by in 2014 for biodiesel producers. While there was a brief period of profits in July and August, small to moderate losses have dominated. More specifically, the average weekly loss to date in 2014 is $-0.05 per gallon. The profit picture has deteriorated substantially since summer, with the largest losses of the year, $-0.33 per gallon, occurring last week. The cumulative loss for the representative plant to date in 2014 is $-1.4 million. 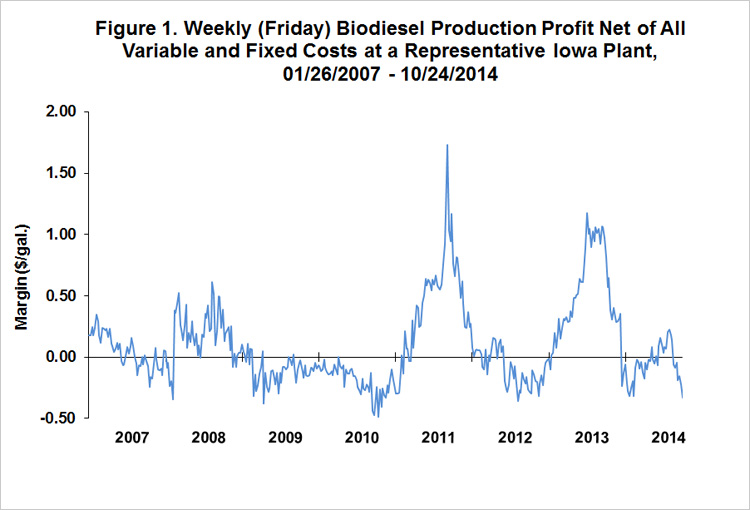 The analysis shows that unless something dramatic happens in the last two months of the year, 2014 will end up in the “famine” category for biodiesel producers. This outcome is consistent with the pattern in previous years related to biofuels policy. The 2011 and 2013 spikes in profitability can be directly traced to the race by diesel blenders to take advantage of the blender tax credit that was set to expire at the end of each year. Once the tax credit expires, the incentive to push up prices, profits, and production disappears and the biodiesel industry returns to a norm of losses. This raises the question why losses are the norm for biodiesel production in the absence of policy incentives.

The first part of the answer to the loss question is found in Figure 2. The chart presents the same biodiesel supply and demand curves for 2014 used in a recent article on pricing biodiesel RINs (farmdoc daily, October 15, 2014). The key point in the present context is that the market equilibrium quantity of biodiesel (both conventional and renewable) in Figure 2 is zero because the demand curve does not intersect the supply curve for any positive quantities. In other words, without policy incentives via tax credits and/or RFS mandates, there is no market for biodiesel in the U.S. because biodiesel production costs exceed the price of petroleum diesel. It is important to note that this result does not incorporate the value of positive “externalities” that may accrue to biodiesel production, such as climate change mitigation, environmental benefits, or improved domestic energy security. 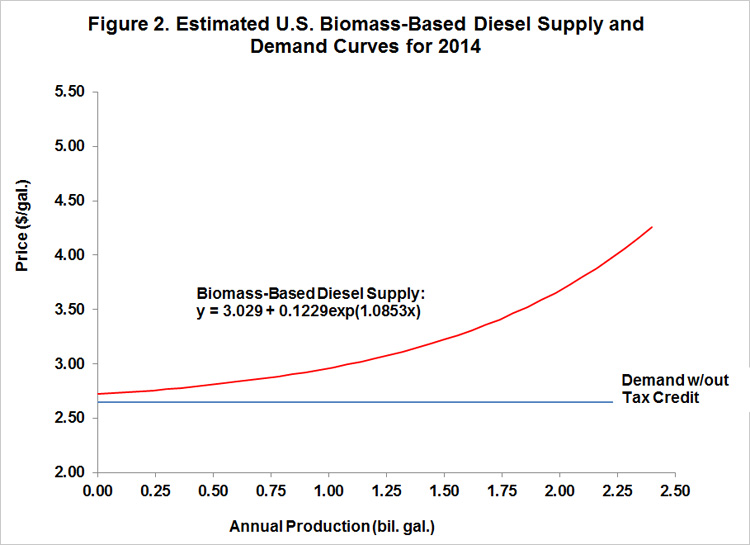 The second part of the answer to the loss question is found in Figure 3, which shows monthly capacity utilization for the U.S. biodiesel production industry from January 2010 through May 2014 (latest data available from the EIA). The figure shows that capacity utilization has been less than 20 percent at times and no more than about 70 percent, indicating ample slack capacity to draw upon as needed. Returns do not have to cover the variable and fixed costs of production for this slack capacity to be brought online; but, instead only have to cover variable costs because the capacity is already in place. In essence, the U.S. biodiesel production industry is over-built relative to existing market and policy incentives. This excess capacity presents a constant threat of over-production once biodiesel prices exceed variable costs of production. Note that this discussion of slack capacity focuses only on U.S. domestic production. Non-U.S. producers also likely have slack production capacity that can be drawn upon in the form of biodiesel exports to the U.S. if needed. 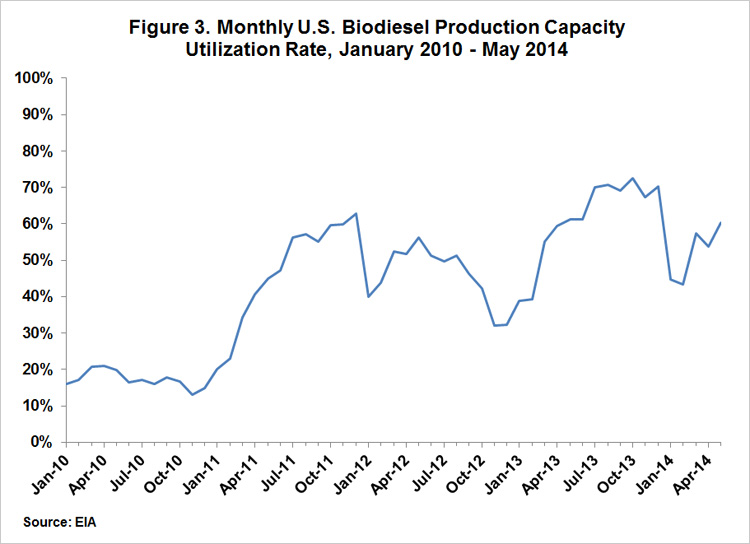 2014 is certainly shaping up to be a down year for biodiesel production profits. Losses for a representative plant will likely be at least a million dollars. This continues the feast or famine pattern of biodiesel production profits that is closely tied to policy incentives. While it is not surprising that policy can incentivize substantial profits under the right conditions, it is less clear why losses should be the norm otherwise. Two factors appear to explain the tendency towards losses when policy-related incentives are absent. First, without policy incentives via tax credits and/or RFS mandates, there is no market for biodiesel in the U.S. because biodiesel production costs exceed the price of petroleum diesel. Second, the U.S. biodiesel production industry is over-built and there is ample slack capacity that can be drawn upon as needed. The lack of market incentives and over-capacity combine to create a classic prescription for production losses.