As required by a recent consent decree, the EPA will soon release its proposed RFS rules for 2014-2016. The proposal may be released yet this week and almost certainly no later than next week. This will be the latest turn in the tumultuous process that started with the release of the preliminary RFS rulemaking for 2014 on November 15, 2013. The most controversial aspect of the proposal was the write down of the renewable mandate for 2014 from 14.4 to 13 billion gallons. The substantial write down from the statutory mandates resulted in the EPA receiving over 15,000 comments and was met with the threat of legal challenges. A final rule for 2014 had been expected shortly after the November 2014 U.S. elections, but the EPA surprised virtually everyone by announcing on November 21, 2014 that the final 2014 rules would be delayed until sometime in 2015 and the 2015 and 2016 rules would be released at the same time.

Several previous farmdoc daily articles have examined the behavior of RINs prices as an indicator of the future direction of EPA policy (October 10, 2013; February 19, 2014; March 5, 2014; August 8, 2014; and October 15, 2014). The purpose of today’s article is to review the current structure of RINs prices and analyze what this implies about the expectations of the RINs market with respect to the upcoming EPA proposal. 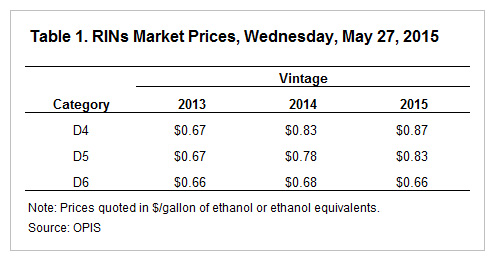 With that overview, we can now delve into the question of what RINs prices might reflect regarding the upcoming EPA proposal. Figure 1 provides historical perspective for the current RINs prices shown in Table 1. While not at the highest levels, Figure 1 shows that 2014 and 2015 D4 and D6 RINs prices are nonetheless still elevated in absolute terms, and D4 prices are higher relative to D6 prices than what was seen for most of the 2014 calendar year. This structure suggests three important conclusions: i) the RINs market is expecting relatively large biodiesel mandates for 2014-2016; ii) the RINs market does not expect the ethanol mandates in 2014-2016 to be set at the E10 blend wall (as in the first preliminary proposal of November 2013); and iii) the RINs market does not expect the ethanol mandate to immediately return to statutory levels. Note that the EPA has repeatedly signaled that the 2014 biodiesel and ethanol mandates will be near actual production levels in 2014. 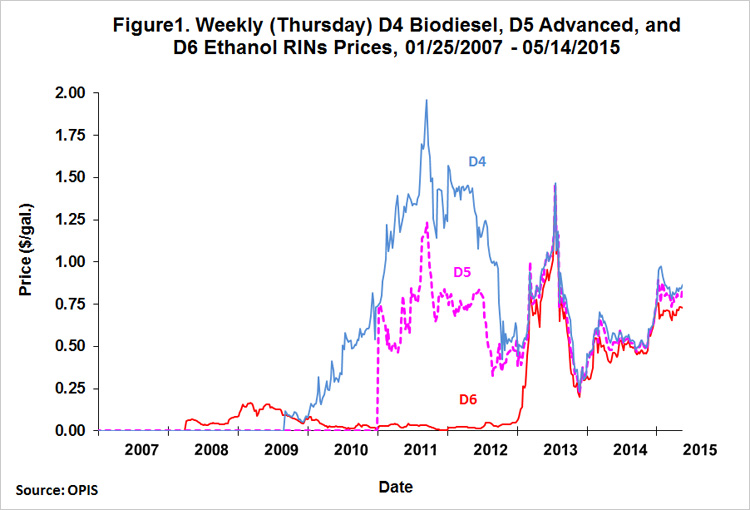 The evidence for the first conclusion–the RINs market is expecting relatively large biodiesel mandates for 2014-2016–is found in Figure 2, which presents an updated model of the biodiesel market used in previous farmdoc daily articles (February 28, 2014; October 10, 2014; October 15, 2014). The level of key supply and demand variables are set to average values for the first five months of 2015. Specifically, the assumed values for the supply curve are $0.315 cents per pound for soybean oil, $4 per 1,000 cubic feet for natural gas, $1.08 per pound for methanol, and $0.9 per gallon for glycerin. It is important to recognize that this supply curve represents the responsiveness of biomass-based based diesel, which includes both conventional biodiesel and renewable diesel (farmdoc daily, December 13, 2013). The demand curve without the $1 per gallon tax credit equals the price of wholesale (ultra low sulfur) diesel prices, assumed to be $1.70 per gallon. The demand curve with the $1 tax credit simply reflects the addition of $1 to the $1.70 diesel price. 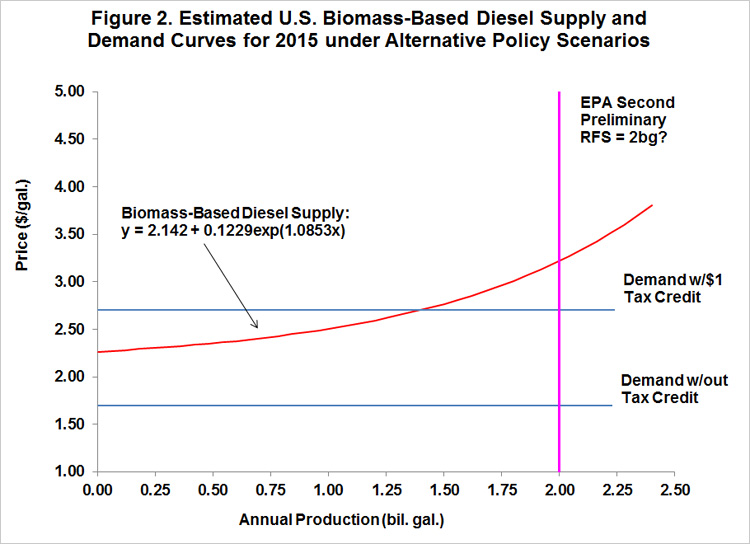 The D4 “intrinsic” value in Figure 2 is simply the vertical distance between the points where the mandate cuts the supply and demand curves. We can use this to determine a mandate level that is consistent with the D4 RINs prices presented in Table 1. A mandate of 2 billion gallons is a useful starting point. At this level, the D4 intrinsic value is $0.35 per gallon with the tax credit [($3.22 – $2.70)/1.5] and $1.01 gallon without the tax credit [($3.22 – $1.70)/1.5]. If we add $0.20 of time value (see the farmdoc daily article on October 15, 2014 for further details), this results in a range of D4 RINs values between $0.55 and $1.21 per gallon. In other words, if one expects a zero percent chance of the tax credit being reinstated retroactively, the expected D4 RINs price is $1.21, and if one expects a 100 percent chance of the tax credit being reinstated retroactively, the expected D4 RINs price is $0.55. The current market D4 RINs price of $0.87 falls towards the lower half of the computed range and is consistent with an expectation of a 2 billion gallon biodiesel mandate and a more than a 50 percent chance that the biodiesel tax credit will be reinstated retroactively. This seems quite reasonable given that the tax credit was reinstated in December 2014 for the 2014 calendar year. Of course, there are many other combinations of mandate and tax credit expectations that could be consistent with the observed D4 RINs price. For example, lower mandate levels and a lower chance of tax credit reinstatement could be consistent with observed prices. 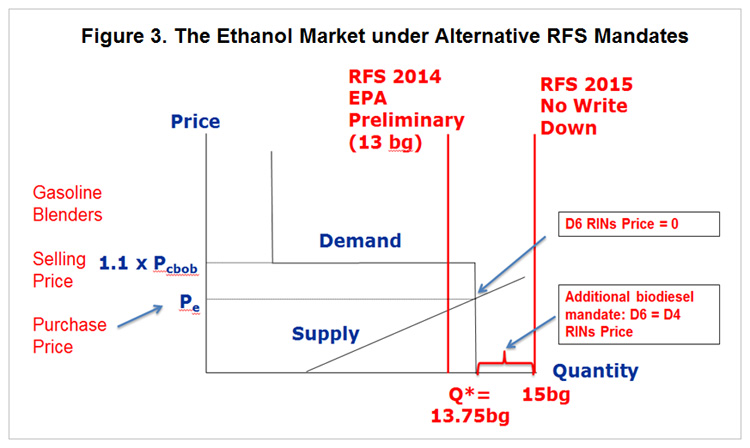 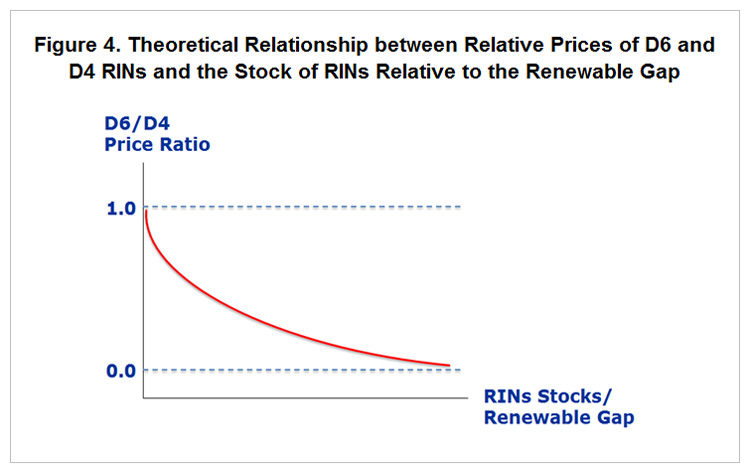 The model in Figure 4 is helpful for interpreting the current ratio of D6 to D4 RINs prices. While the current ratio, 76 percent, does not imply ethanol mandates in the very near future at statutory levels, it is high enough that we can conclude that the RINs market is forecasting the exhaustion of the stock of available RINs in the not too distant future. This suggests that the ethanol mandate could be on a trajectory to return to statutory levels, even perhaps as early as 2016. Regardless, this is an important clue that the EPA proposal may contain signals about the future path of the ethanol mandate beyond 2016. If this were not the case, the D6 RINs price would not need to be as high as it is relative to D4 RINs prices. An alternative explanation is that the RINs market expects a court challenge to any cuts to the ethanol mandate over 2014-2016 and is factoring this into the level of D6 RINs prices.

There is intense interest in the upcoming EPA proposal for 2014, 2015, and 2016 RFS rules, which is scheduled to be released in the very near future. The RINs market has an exceptional track record in recent years of predicting EPA policy changes. Hence, the structure of current RINs prices is analyzed for clues regarding what the new EPA proposal might contain. In recent weeks, 2014 and 2015 D4 and D6 RINs prices have remained high in absolute terms and D4 prices have been elevated relative to D6 prices. This structure suggests three important conclusions: i) the RINs market is expecting relatively large biodiesel mandates for 2014-2016; ii) the RINs market does not expect the ethanol mandates in 2014-2016 to be set at the E10 blend wall (as in the first preliminary proposal of November 2013); and iii) the RINs market does not expect the ethanol mandate to immediately return to statutory levels. It would not be surprising if the EPA proposes biodiesel mandates for 2014-2016 in the range of 1.8-2.3 billion gallons and ethanol mandates for 2014-2016 in the range of 13.8-14.5 billion gallons. We shall soon find out.

Irwin, S. "Rolling Back the Write Down of the Renewable Mandate for 2014: The RINs Market Rings the Bell Again." farmdoc daily (4):148, Department of Agricultural and Consumer Economics, University of Illinois, August 8, 2014.

Irwin, S. "Implying the Probability of an EPA Reversal on the Write Down of the Renewable Mandate from the RINs Market." farmdoc daily (4):41, Department of Agricultural and Consumer Economics, University of Illinois at Urbana-Champaign, March 5, 2014.

Irwin, S., and D. Good. "Who Wins if the EPA Reverses Itself on the Write Down of the Renewable Mandate in 2014?" farmdoc daily (4):38, Department of Agricultural and Consumer Economics, University of Illinois at Urbana-Champaign, February 28, 2014.

Irwin, S. "Will the EPA Reverse Itself on the Write Down of the Renewable Mandate for 2014? The Message from the RINs Market." farmdoc daily (4):31, Department of Agricultural and Consumer Economics, University of Illinois at Urbana-Champaign, February 19, 2014.

Paulson, N. "Understanding the Lifespan and Maturity of a RIN." farmdoc daily (2):65, Department of Agricultural and Consumer Economics, University of Illinois at Urbana-Champaign, April 6, 2012.